one. one of my coworkers, john, lives on a boat. last sunday, father’s day, john invited me and two other members of my team, joseph and claire, to his boat for a sailing trip. in the hours before we set sail, we ate brunch at a packed dumpling place, as he explained the basics of sailing to us.

he took three chopsticks and arranged them as he explained. one along the length of the boat, and two for the sails. he took the pen he wrote with, and pointed it at the boat. the chopstick and the pen were head-to-head, and in this example, the boat and the wind were in opposite directions.

“the pen’s the direction of the wind,” said john. “knowing that direction is important. you’ll need to develop a sense for it.”

“isn’t there a wind indicator on the top of the boat?” asked joseph.

“yes,” said john. “but don’t look up. feel it against your cheeks, or your ears. look at the water, look at other people’s hair.” wind direction was so vital, looking up would waste time; that was the lesson he wanted us to learn.

“you have to adjust based on how the wind is blowing,” said john. “and so, we begin with one of the most important questions in sailing: how do you sail against the direction of the wind?”

joseph, claire and i sat and traded glances. silence stretched among us as i thought about the question.

“the short answer,” john replied, “is that you can’t.”

two. in my continued adventures with the american healthcare system, i learned that my psychiatrist and therapist couldn’t schedule appointments with me while i was in california. something about being in different states, even if the appointments were virtual. my psychiatrist found me a practice covered by my insurance, and i went through their intake process to get an initial appointment.

i had my meeting with dr licorish on a tuesday morning, during an hour off work. we talked about my complex psychiatric history. i found it strange hashing out my life story in smooth beats. it felt like i was saying what he wanted to hear so he could refill my prescription.

in either case, we chatted about different patterns of depression and anxiety. he talked about what he’d heard from other people’s experiences, and his own theories, which i appreciated. he’d seen two broad kinds of depression. one comes and goes on the scale of days, affected by the events in someone’s life.

the other one lasts for weeks at a time, without reason or pattern behind. losing interest in a hobby you used to be passionate about, with things formerly joyful turned to chores. like being blown by erratic winds, ones that shifted direction whenever you watched them.

and that’s the struggle. the one i felt when, last thursday, writing blog posts turned from a source of comfort to a drag. or when, last friday, i had dinner with some friends in sf, and i couldn’t bring myself to enjoy the company. or when, last saturday, i found no fun working on huntinality’s puzzles, even if i looked forward to it for weeks.

three. “how do you sail, then,” asked claire, “if you wanted to go against the wind?”

he tilted the three chopsticks, forming an angle with the pen. the boat was no longer head-on with the wind, yet still pointing close forward. he reproduced the image on the notebook he’s been writing on. 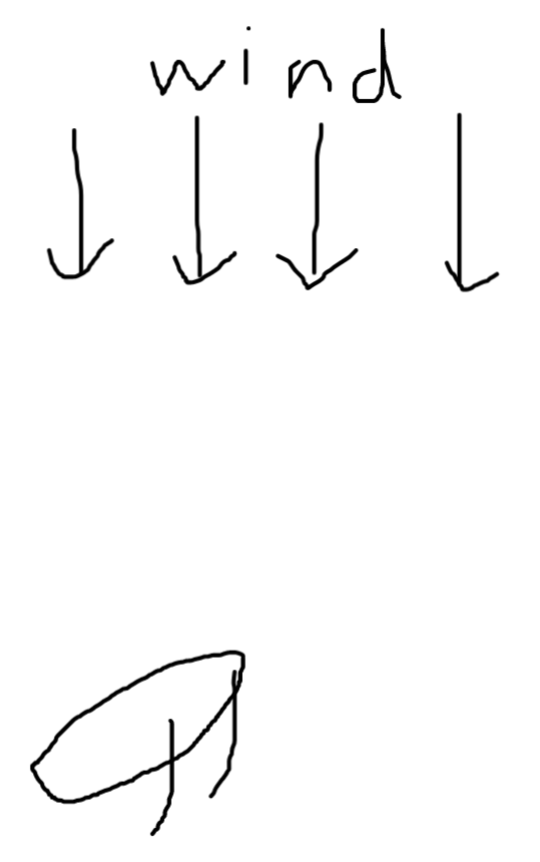 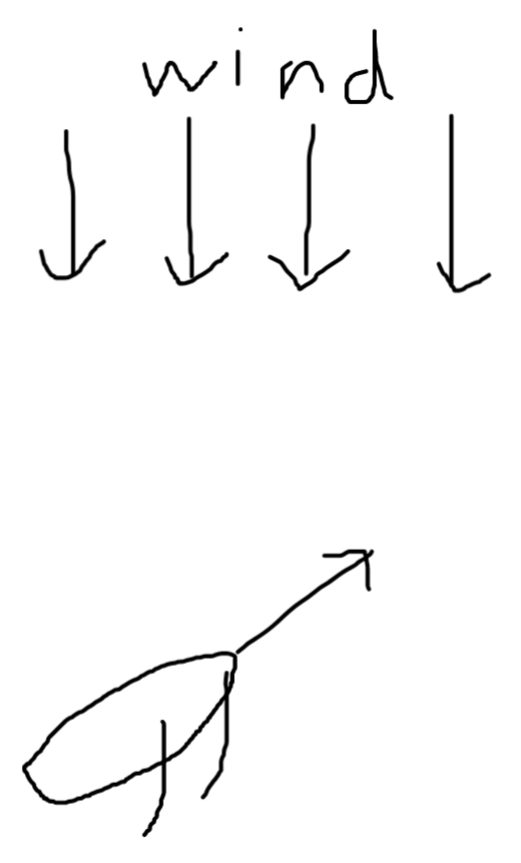 “and then,” said claire, “you change direction, so you keep moving forward.” 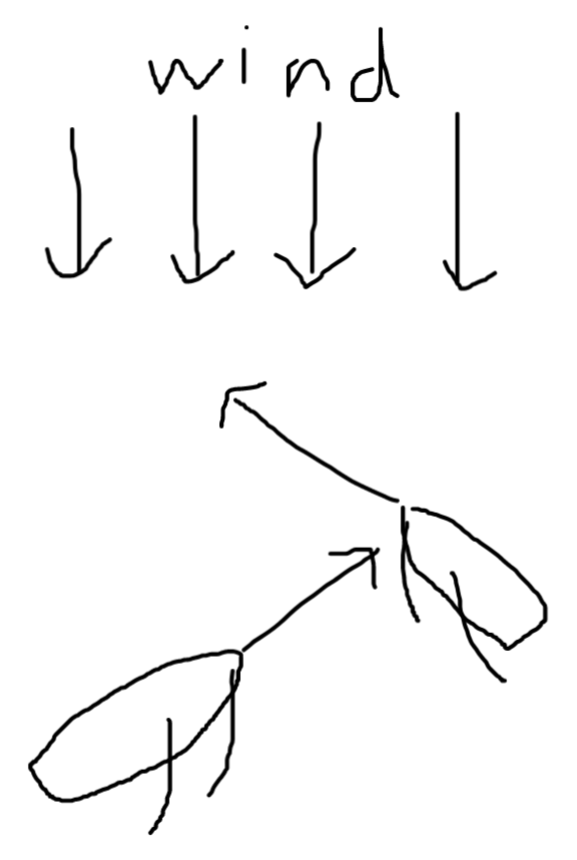 john nodded. to move forward, you zigzagged, so you never directly sailed against the wind. the maneuver of going in one direction, then turning about ninety degrees to go the other direction, was called tacking. there were nuances to that. there was a region called the no-sail zone, so you couldn’t point your boat too close to the wind. but that was the principle.

“i’ll show you when we get on the boat,” said john. “since this is your first time, cj and claire, the main thing you’ll do is tacking. i’ll handle the rest with joseph’s help.”

he was interrupted by a server, who arrived with our first three dishes.

four. after john showed me and claire how to tack, and watching us try it out, we set sail. the san francisco bay was surrounded by city skylines, hills covered with trees, and bridges flanked by tall supports. the day was, to our fortune, clear. the clouds were scant, the wind was steady, and it was warm enough i wore only a thin jacket over a shirt.

we sailed past the remnants of the berkeley pier. past that, my already flimsy knowledge of bay area geography was made flimsier by the fact that we were on water. i made out bridges, but i didn’t know which they were. we kept our distance from the land and other boats. 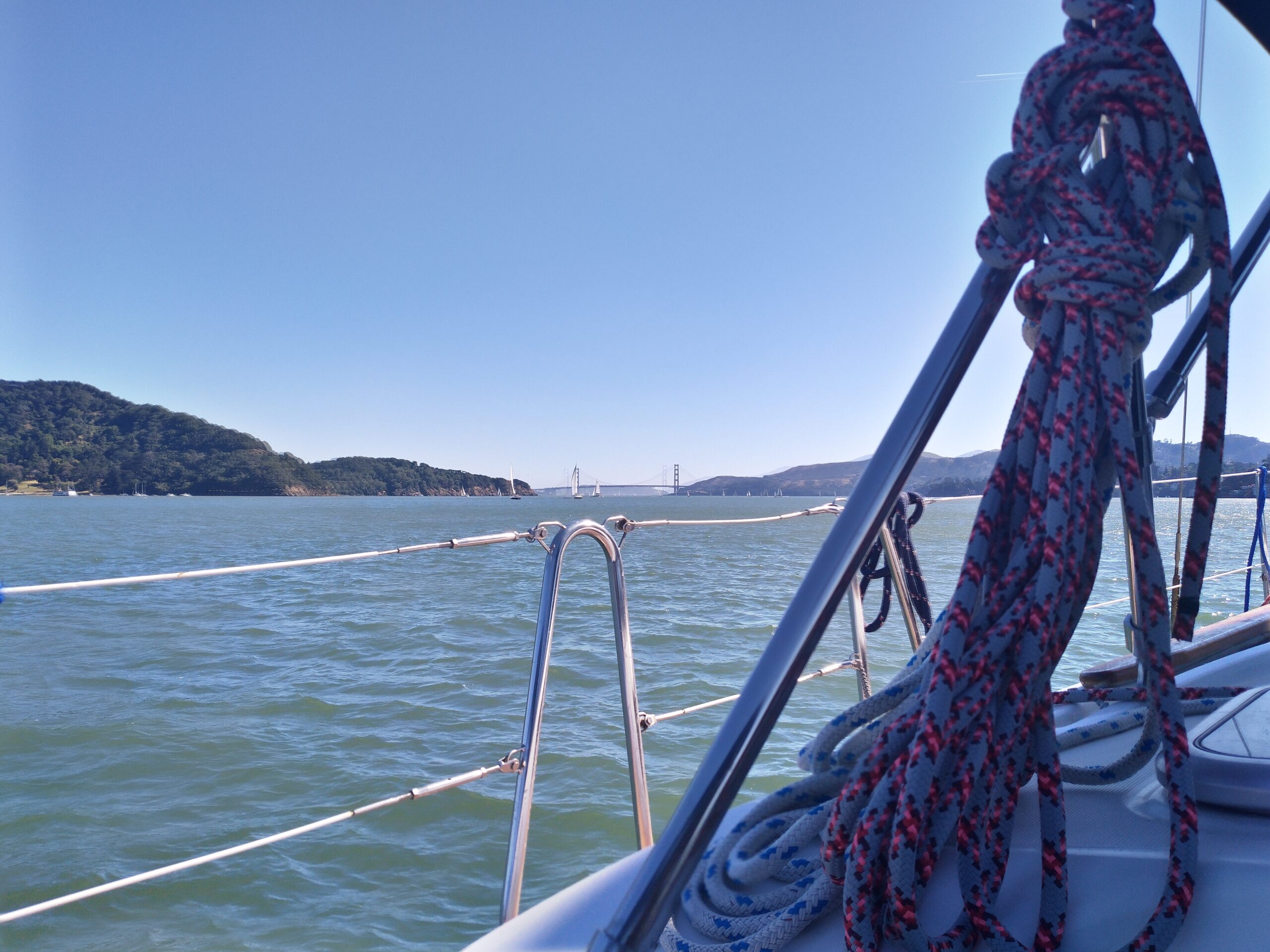 i held ropes as i steered to one direction, and other times i pulled ropes and wrapped them around winches. we kept close to the wind, narrowly avoiding the no-sail zone.

and the relaxing parts were relaxing. we were, after all, on a boat in the san francisco bay, reaping enjoyment from the kind of wealth that came with being a programmer in a startup. we ate snacks, took pictures, and chatted. about sailing and other hobbies, about the cultures we grew up in, about our plans for the future, or lack thereof.

after some hours, for it was difficult to tell how many hours exactly, we turned to go back. it was then that i understood why “having the wind in your sails” meant being in a position of good fortune.

five. for the past few days, i’ve thought on-and-off about that sailing trip. how do you sail against the wind? john asked. you can’t, i learned. and yet, we can work toward that direction anyway. not through stubbornly facing the wind head-on, but by letting the wind move us sideways—then turning, tacking, moving in another direction but still indirectly moving forward.

one of the blog posts i read as a prefrosh was rona’s sellout’s conundrum. in it she quotes mihir desai, a quote that’s stuck with me, so i’ll reproduce it here:

The shortest distance between two points is reliably a straight line. If your dreams are apparent to you, pursue them. Creating optionality and buying lottery tickets are not way stations on the road to pursuing your dreamy outcomes. They are dangerous diversions that will change you.

i used to believe this was true. that if you had set goals in mind, your time was best spent going for those goals directly. i used to admire people who stuck to what they wanted, like the kids who wanted to be doctors then grew up to be doctors. i used to think that you couldn’t be good at something unless you’ve been practicing since birth.

but sometimes, pursuing your goals head-on is impossible. sometimes, the wind’s blowing against where you want to go. and even if it was possible, it could hurt you. harden you, sharpen you. you’ll make it, but you’ll end up cutting everything you touch. even if the shortest path to where you want to go is a straight line, that doesn’t mean you should take it.

instead, move forward a bit, then turn. jump from hobby to hobby. pursue wide and varied interests. change your major as often as you change your clothes.

keep tacking, as that’s the only way to sail against the wind.