Do you Nintendo? On an unrelated note, part of me thinks this and this might be the same person.

About 1 week ago Nintendo released their new handheld, the 3DS. Ooooh, ahhhh. 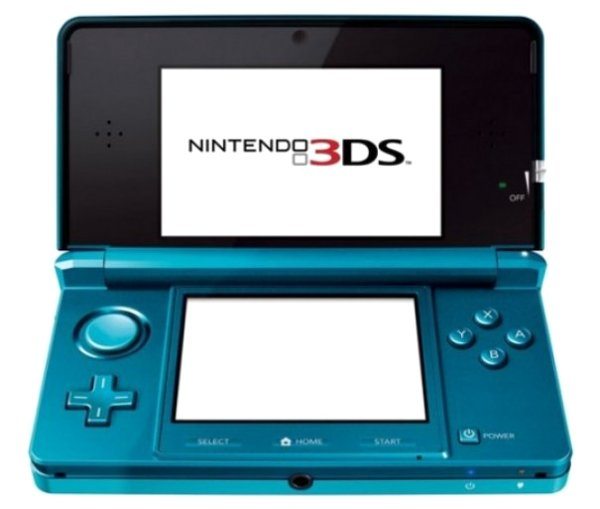 It’s very similar to Nintendo’s other handheld DS systems but includes some new goodies. The first, and most notable, is the glasses-free 3D top screen. Using some fancy hardware and focal length magic, the top screen actually sends two different images at two different angles so that each hits one of your eyes, creating a 3D image.

The 3D is cool, but irrelevant for this entry. More relevant, is the new “StreetPass” feature. Basically, in a ploy to get people carry around their new 3DS systems, Nintendo rigged it up so that if two people, each with a 3DS, pass each other on the street or in the hall, data (avatars, game stats, points, etc) is swapped between the two systems. I happen to be planning a massive raid with some kitty cat warriors and as many Miis as I can find, so I carry this sucker around with me at all times. I bank on the fact that MIT has a bunch of people that will buy a new system on launch day and thus far, have not been disappointed. I’ve encountered about 5 people via StreetPass.

Ok, so that explains I had my 3DS with me when I walked through Lobby 7 this morning on my way to a 2.002 exam. I stepped into Lobby 7, looked up (ALWAYS look up when you go into Lobby 7, you never know what you’ll find) and, to my amazement, I saw a big ol’ question mark thing. 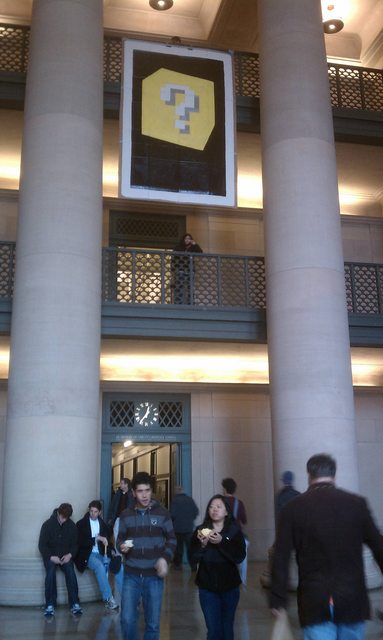 I knew exactly what it was, but others may not, so allow me to explain. A third set features new to the 3DS are its augmented reality (AR) abilities. With a certain predefined image displayed in front of the 3DS’s outward facing camera, the 3DS is able to establish its orientation in 3D space and project rendered objects into real life.

Basically, point the 3DS at a special playing card laying on a table and, if you look at the screen on the 3DS, it will show the card, the table, and then little characters or whatnot will appear and look like they’re walking around on the table. You can then walk around the card and look at all the sides of the characters. It’s cool technology, it’s kind of like having a magic looking glass that reveals invisible video game characters sitting on your table.

I INSTANTLY recognized the giant card hanging from the banister as one of Nintendo’s AR cards. My 3DS was out of my backpack, opened up, and pointed at that card faster than you can imagine. It was a bit tricky because it was at such a steep angle and not well lit, but after walking around Lobby 7 like a complete doofus, holding my 3DS up above my head as if in offering to the Nintendo Gods, it recognized the card. 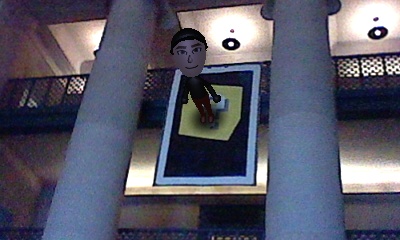 Ok, this was too cool. I walked around for a while and my character maintained eye-contact with me. I fiddled with my 3DS and found a bunch of other Miis that I’d downloaded from Reddit and dumped them all on the AR card as well. What a happy group! 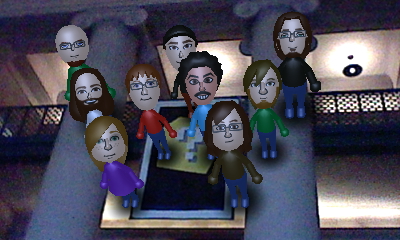 I’m pretty sure Borat and Jesus are in there.

Turns out there are all sorts of different stances and poses you can put the characters in, so I cycled through all of them. Here are some of my favorites: 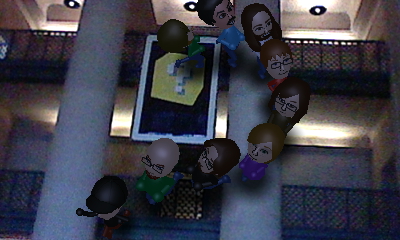 Bow to me! (I like that they’re standing on the columns) 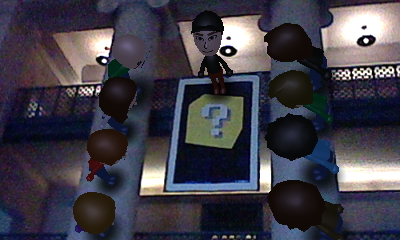 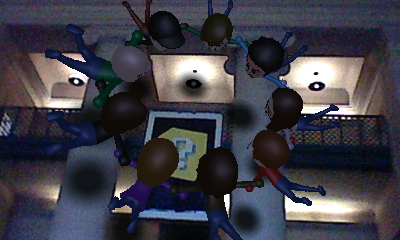 By this time I’d noticed two other people looking just as goofy as me, wandering around Lobby 7 holding their 3DSs up in the air. A third person walked by and said “Hey, do you have Street Pass on?” *nod* “Sweet, we’ll get each other then!”

It was an awesome start to my day. I had a great time fighting a giant dragon, shooting targets, and watching my Mii conga around on the columns. Thanks, whoever hung that thing, it was awesome. Unfortunately it’s gone now, but know that you caused quite a bit of amusement for those of us with 3DSs. It definitely did not go unseen.