Yesterday, I got up early, despite having gone to bed late the night before, because 5th East was going to Six Flags New England, courtesy of Sarah ’08, who organized the trip.

Also, because I wanted to have time before we left to go take some pictures. Apparently, Lord Voldemort (of Harry Potter fame) tried to kill the Great Dome with a curse, leaving a lightning bolt-shaped scar similar to Harry’s. 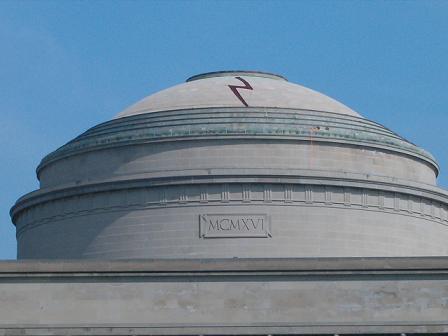 It was visible from far away. And tour groups in Killian Court looked at it as they went by. 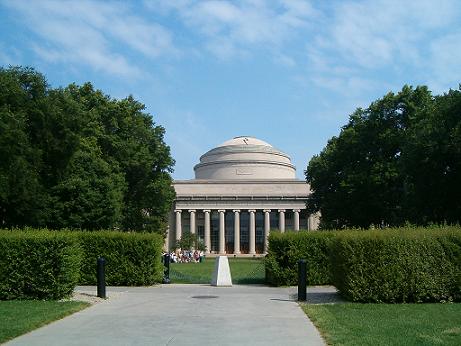 Hacks make me so happy. 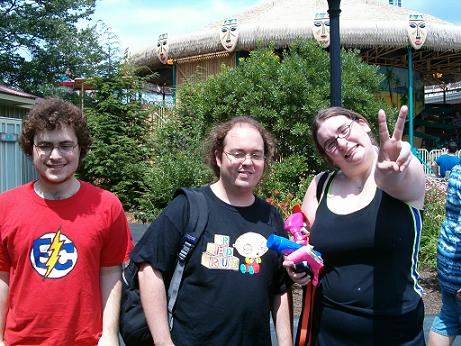 My group spent the first several hours in Hurricane Harbor, the water park. I really love intense water rides, and this place had a lot of them. There was a thin blue tube called Cannonball Canyon that you went down on your back, which started out slow for the first several seconds and then had a sudden increase in the downward angle (the way Antonio described it was “Lame, lame, lame, AAAAAAAHHHHHH!!”). And a green water slide that went straight down. And something called the Tornado, where your group was on a raft that went through a tube into a huge funnel, where the water coming from all directions caused the raft to go back and forth and every which way and climb the walls to the point of practically going upside down.

After the water park, we went on all the roller coasters. When I was little, I was afraid of most roller coasters. But when I was eleven, my parents got divorced – and when my autistic twin brother came up to visit my mom, he wanted to go to amusement parks. This particular brother has been a roller coaster junkie ever since he was too little to go on most of the rides. And my mom is afraid of roller coasters. So it fell to me to take him on whatever rides he wanted. And pretty soon, I had little fear of any roller coaster, and had ridden every one at Kentucky Kingdom and King’s Island multiple times.

This was one of the coasters we went on, the “Mind Eraser”: 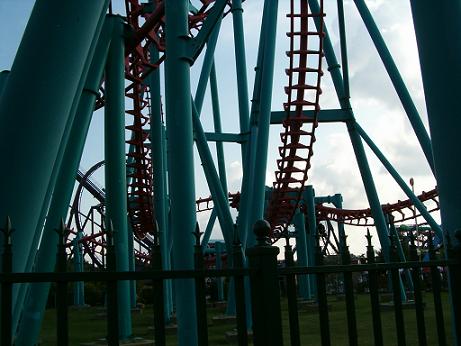 We went on all the major roller coasters at the park, except for the newest one. Different people like different styles of roller coasters. I, for example, do not like it when roller coasters corkscrew frequently or jerk you around from side to side, because I get splitting head-and-shoulderaches afterward. However, those of us in my coaster-riding group were in unanimous agreement about the worst and best coasters…

Worst: New England Skyway. I’ve been on a lot of wooden coasters. I’ve been on the Beast, in Ohio, which is one of the most famous wooden coasters in the country. They are always a rougher, more jolting ride than steel coasters, and I know to expect that. I have never, ever, been on a rougher or more jolting coaster than the New England Skyway. It felt like the rungs on the track were turned vertically instead of horizontally. It was quite painful.

Best: Superman, Ride of Steel! Built in 2000, this was rated the #1 coaster in the world four years in a row, with good reason. It climbs 20 stories, with an amazing view of whatever river that is that runs parallel to it. The first drop is 221 feet at a 75-degree angle. It reaches speeds of 77 miles per hour and lasts around three minutes. It has two awesome red-lit underground tunnels.

Superman was so imposing that, as we waited in line and I looked at that first drop, I felt genuinely scared of a coaster for the first time in years. Going up the first hill was nerve-wracking. All my fear evaporated as soon as we started down the hill, replaced by cheering and whooping. It is a truly amazing ride – in addition to its impressive features, the lap restraints feel far more secure than they do on most rides, and it is easily one of the smoothest-feeling rides I’ve ever been on. We went so fast that it blew tears from my eyes. The wait was very long, but it was worth it for this truly amazing ride.

We left when the park closed at 10. I was dehydrated, and quite sleep-deprived from the previous night – happy to crawl into bed at 1:15!

One response to “I feel the need, the need for speed!”