IAP: The Class Edition by Snively '11

I'm back in class

Well, my two weeks of no IAP agenda have come to a close and I’ve started my class.

If you’re a mechanical engineer, attend MIT, and are a sophomore, IAP means only one thing: 2.670, a class called “Mechanical Engineering Tools.” 2.670’s job is to get students familiar with the tools and machinery in the main MechE shop, the Pappalardo lab. Inside are all sorts of mills, lathes, pipe benders, band saws, belt sanders, grinding wheels, and anything else you might need.

While a lot of people who decide to be mechanical engineers love the math and physics behind it all, not everybody has had the chance to work with the actual machinery involved in manufacturing things. Not every high school has FIRST robotics, not every kid has power tools in their garage at home, and even for those that have worked with shop tools, a refresher never hurts.

Next semester is 2.007, the most famous robotics class at MIT, and 2.670 exists almost solely to introduce students to the tools they’ll be using for 2.007.

Today was my third day of class and I thought I’d show you a bit of what I’ve been up to. Keep in mind, there are about 50 people in my section of the class, so some of the processes have been streamlined for time efficiency’s sake (less individual time on machines, more prefabrication on the part of the staff, less time-consuming work on the students’ part).

First, the project. In years past it’s been customary for students in 2.670 to build stirling engines. At the end of 2.670 there would be a big competition to see whose engine ran the fastest. 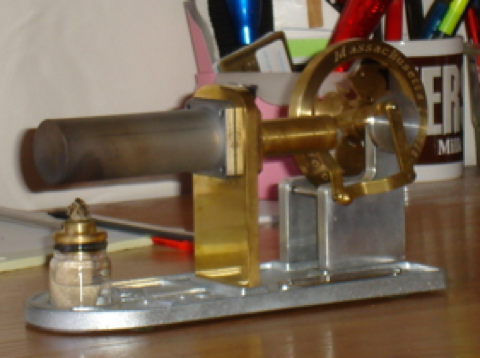 This year there is a new professor for the course, Professor Frey, so the project has been changed. This year we’re using compressed air, some solenoids, and various other bits and pieces to create pneumatic bug things. 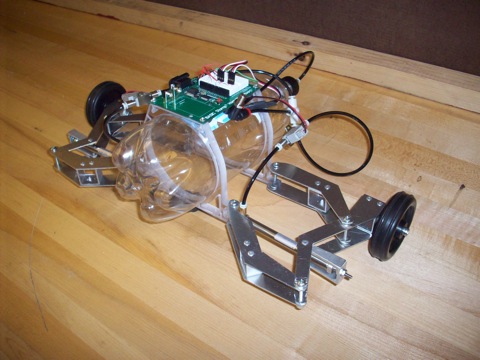 The wheels only roll in one direction, so the mechanics behind walking involve a solenoid opening a valve, the compressed air pushing a leg forward (the wheel rolls) and then another valve pulling the leg back (remember, the wheel only rolls one direction so the robot is pulled forward as the leg is pulled back). Repeat for the other side, and you have an awkward little bug crawling around the ground.

Day 1 of class was spent working with electronics. Each of us were given a Parallax BASIC stamp board and some software and we farted around with a 7-segment display and some LEDs. Ta-da! (Oh, all photos in this entry are courtesy of my Mac’s webcam since I was too lazy to use a real camera) 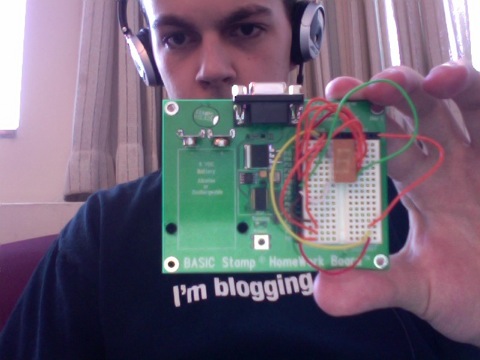 We also received a bag full of all sorts of other free goodies. Included was this nifty little multi-meter 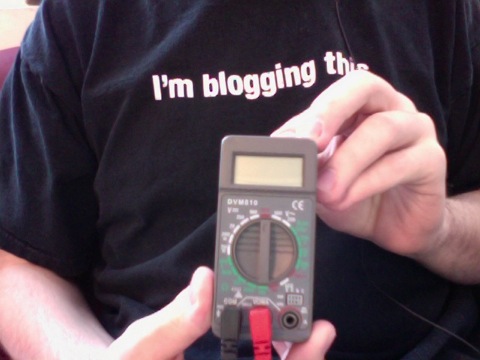 and a tool set 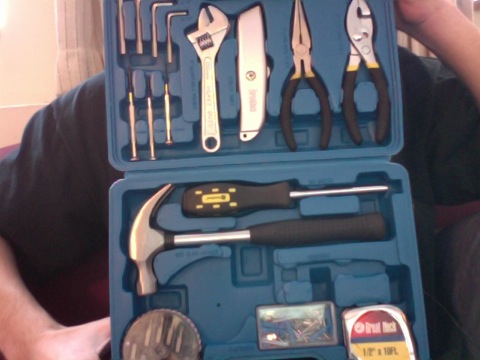 along with some safety glasses (which I didn’t take a picture of, sorry).

The next day was spent in a machine shop, punching some metal plates, drilling some polycarb, riveting, and drilling into some plastic (other than the polycarb). At the end of it I had two of these polycarb collars (with freshly drilled holes) 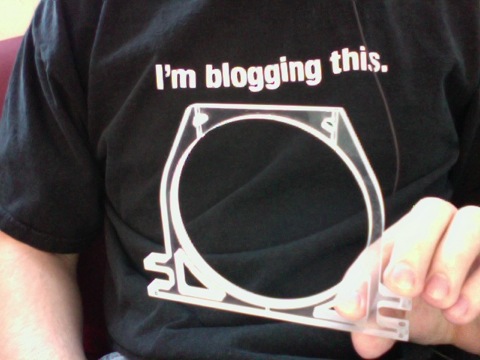 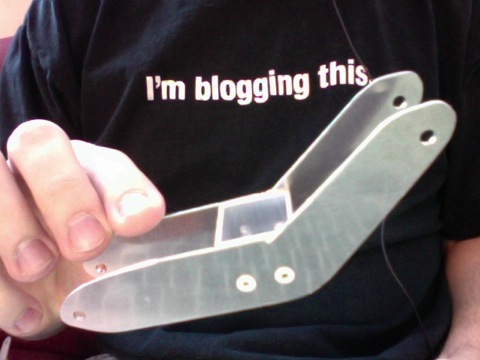 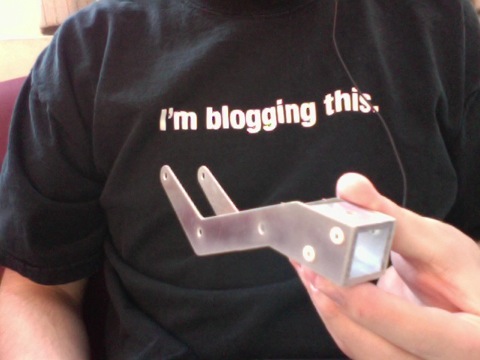 Oh, and while I was taking pictures I snapped one of myself just for good measure. 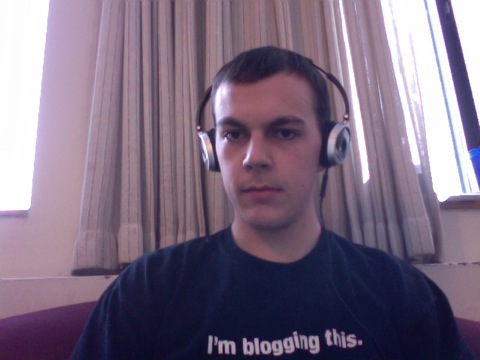 Today, day three, was spent working with electronics again. We learned about potentiometers and messed with radio controlling some things. By the end of it my partner (Andrea ’11) and I had rigged a little 7 segment display to read from 0 (joystick on the far left) to 9 (joystick on the far right) and also display each number sequentially moving the stick from left to right. The left joystick controlled the decimal point. We also wrote a little program that spelled the word “HELL” as we moved the joystick from left to right (MIT has several synonyms, one of them is “hell,” which was the easiest to spell on a 7 segment display).

Tomorrow is some lathe-work, where I’ll be turning my wheels. Next week starts with some more electronics, then we assemble the robot, and then finally we code it to walk how we want it to. At the end of the month I’ll try to write a wrap-up entry, but as you may have noticed I’ve been slacking on the blog/Internet front. For everybody who has sent me an e-mail in the last 2 or 3 weeks that I’ve completely ignored, sorry. I’ve kind of taken myself off the grid for IAP. I’ve noticed that the time I usually used for blogging is now being taken up responding to e-mails and moderating the comments of my current entries. As an attempt to combat this, I’ve started aggressively screening e-mails (ie, not answering e-mails that I feel can be answered by just reading the admissions website) and letting comment spam accumulate for several days before batch deleting it. So, if I’ve ignored your e-mail, sorry, but I’m ignoring almost all my e-mails just for my own sanity.

ALSO . . .
Mystery Hunt was AWESOME. I didn’t really get a chance to post any puzzles because there weren’t any data mining tasks as ridiculous as last year, but rest assured, once the puzzles are re-uploaded to the web (the puzzle makers are modifying the website and integrating answers) I’ll do a full wrap-up to compliment Yan’s. We were on different teams with different stories, and believe me, at over 60 hours long, there’s plenty of Mystery Hunt to go around. I did, however, save one of the puzzles to my computer if you want to give it a go. I’ll let you know the correct answer later.

The title of the puzzle is “Friends in Noble England” and it consisted entirely of this picture: 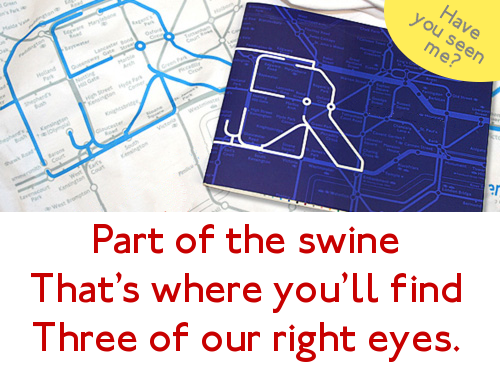 Make sure to watch Attack of the Show on G4 tomorrow, they’re doing a feature on Mystery Hunt this year (their cameras and crew were there for kickoff, you should be able to see how insane it was, but on national television, which makes it a million times cooler).

Oh, and Karen, as far as hamsters go, here’s a pic so that I don’t have to stfu. Besides, everybody knows, with my mouth that’d be almost impossible. 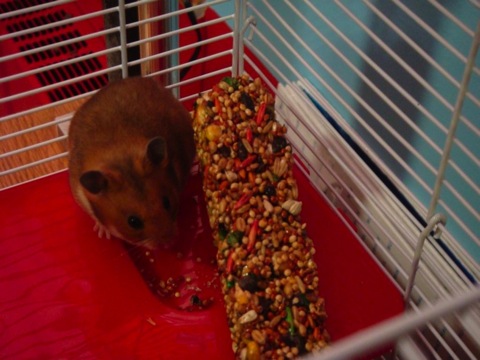 34 responses to “IAP: The Class Edition”