I’m embarrassed to be writing this entry. by Matt McGann '00

The one where Matt regresses back to being a 12 year old boy.

Yesterday evening at MIT had a fairly random pair of events: 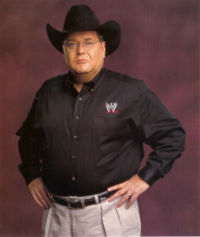 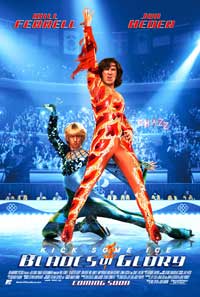 First, pro wrestling announcer Jim “J.R.” Ross spoke at a colloquium hosted by the Comparative Media Studies (CMS) department. Later, there was a free advance screening of Blades of Glory by the Lecture Series Committee (LSC). I hope you don’t think less of me for going to a talk about professional wrestling followed by a sophomoric comedy with lots of crotch jokes.

I admit it; growing up, my brother and I watched pro wrestling. Later, we both did varsity wrestling in high school, which is a real sport and does not involve costumes or beating people with steel chairs. Regardless, when I heard that J.R. was speaking, I was quite intrigued.

When I came to MIT, I knew there would be lots of famous scientists and engineers who would give guest lectures. Over my years here, there have been lots of astronauts (including Buzz Aldrin), mathematicians (like Benoit Mandelbrot), CEOs (Bill Gates, Jeff Bezos, Jack Welch), technologists (Steve Wozniak, Jimmy Wales) — the kinds of cool people you’d expect to hear talk at MIT.

But there have been lots of speakers here on other topics, too. I’ve seen Mira Nair, the MIT Blackjack Team, Al Gore, Ralph Nader, Thomas Friedman, Orson Scott Card, and more. I’ve also missed talks by Kofi Annan, Zhu Rongji, Frank Gehry, and the Dalai Lama, among others. The talk by Jim Ross fits into the category of speakers I never thought I’d see, and certainly not at MIT.

Actually, there is an entire class in the CMS department this term devoted to pro wrestling: CMS.602 Topics in Comparative Media Studies. The class is taught by Sam Ford, who is also a licensed professional wrestling manager and performs for Universal Championship Wrestling in Kentucky. Courses in CMS frequently take an academic look at topics in popular culture. For example, this term the course CMS.922 Media Industries & Systems, looks at video games. It is taught by Chris Weaver, the founder of Bethesda Softworks — the company that invented the original John Madden Football and created the hit RPG The Elder Scrolls: Oblivion.

As for Jim Ross’ talk itself, I came away thinking about the concept of storytelling. What does it mean to tell a story well? What makes a good story? How do you create a story that a broad audience can relate to? There was also an interesting thread of discussion about the role of gender roles and sexuality in pro wrestling, and how characters, both male and female, are developed. Of course, we also talked about the legitimacy of pro wrestling: is it “fake,” performance art, sport, spectacle? (This discussion being done with everyone having an appropriate understanding of how pro wrestling actually works)

After the Colloquium, I ran over to Anna’s Taqueria with my friends Dan & Jeff for a quick burrito dinner, then we headed over to room 26-100 to get in line for a sneak preview of the new Will Ferrell movie, Blades of Glory. Blades of Glory isn’t due out in theaters until March 30.

“Sneaks” are a fairly regular event for LSC. A few of the sneaks from recent years include 8 Mile, Corpse Bride, I (Heart) Huckabees, School of Rock, and Harold & Kumar Go To White Castle. There will be another free sneak preview in a couple weeks (just before CPW): Disturbia, which appears to be a bad remake of Rear Window.

One of the best things about watching a sneak at LSC is the crowd. The night starts with trailers for upcoming LSC movies. Before each trailer, there is an LSC slide informing the crowd when the movie will show, for example, “Next Friday and Sunday.” The entire crowd, in unison, then responds, “Next Friday and Sunday IN STEREO!” It’s pretty cool to see the whole crowd shout it at the screen.

The related LSC tradition is that if the movie audio or visual should fail during the film, one audience members shouts “LSC!” and the rest of the crowd replies “Sucks!” You can try this at any movie theater near a large concentration of MIT alums (Boston, Silicon Valley, Manhattan, etc.) at a movie that might draw a large MIT crowd. At a screening of Star Wars Episode 1 in Los Angeles on opening night, at the appropriate moment I yelled “LSC!” and got a reply from somewhere in the large crowd; it was pretty cool.

The crowd at the Blades sneak was particularly vocal. There was no “LSC… sucks!” moment, but the crowd laughed quite heavily at just about every laugh line. Maybe it’s because Spring Break is almost here.

As for the movie itself, it was funny, probably worth paying to see in a movie theater, if you like this sort of movie. It wasn’t as good as, say, Anchorman or Old School, but still pretty good. Ice skating fans with a sense of humor will particularly enjoy it (lots of cameos; the one from Sasha Cohen is the best).

Anyway, that was my Thursday evening.

11 responses to “I’m embarrassed to be writing this entry.”