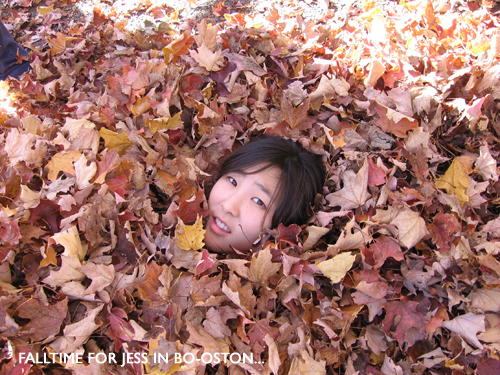 I’m beginning to think the foliage is out to get me. I was hit by another leaf, on the foot, two days ago. It wasn’t a gentle smack, but it actually stuck to my foot since it was damp out (seriously, you can’t make this stuff up. Okay, maybe you can, but I’m not, I swear). To make matters worse, I was wearing open heels, and had recently showered (it happens more often than you might think), as I was going to my house’s formal.

Brian speculates: All my buddies tell me MIT is for a bunch of nerds who have no life. Is that true? Can you have a stronger interest in your liberal art courses and still have a good chance of making it in MIT?

A NERD? Why, I’ve never been called a nerd in my life! Good heavens! (Affirmative.)

It’s really hard for me to explain the nerd stereotype; the best thing you could do would be to come here, stay with an MIT student, and see for yourself. I consider myself a nerd proudly, but at the same time, I go to the mall, wear makeup, and own way too many pairs of shoes. We play a ridiculous amount of intramural sports and have parties that don’t just involve problem sets; we work hard and we play hard too. If that’s not enough for you, I shower. Daily.

As for liberal arts, I’ve been a writer ever since I wrote my first “book” in fourth grade, I take pictures, I sing, I dance, I’m in a sketch comedy group. I took all the AP history and English courses I could get my hands on in high school, in conjunction with AP Computer Science and AP Calculus BC. Other examples: half of my friend Christina’s courses are humanities courses, and my buddy Matt Fisher is a political science major. We have an excellent creative writing program and art department.

So yes, MIT students are well-rounded human beings who don’t sit inside all day and look at people’s source codes (okay, I only do that a few times a week). We’re social, especially with those we live with – my hall won a bbq paid for by our house because we won the community service contest for Camp Kesem, a program for children whose parents have or had cancer. 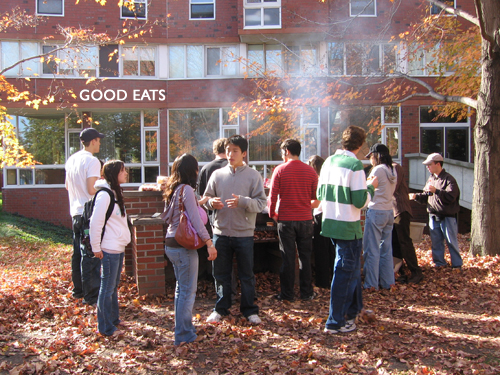 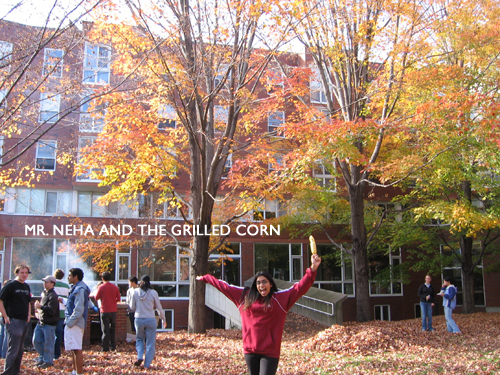 Oh, and we go to formals. 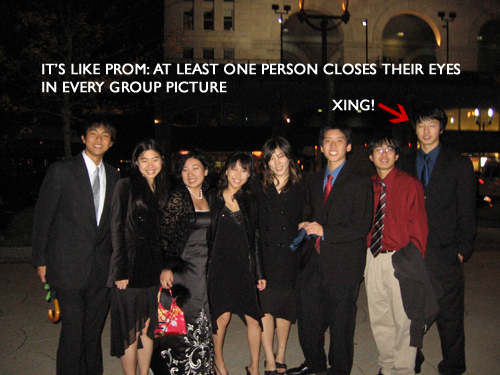 This Friday my house rented a huge cruise that sailed around the harbor as we danced the night away; the only problem was that we had to take either the T (subway) or a taxi to get out there. I got back late because of MedLinks training, and since Next House is the very farthest you can get from the T station, we had to scoot across campus at high speeds in our suits and ties. It was all very classy, really. 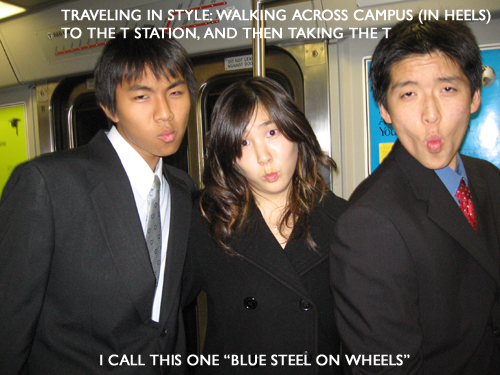 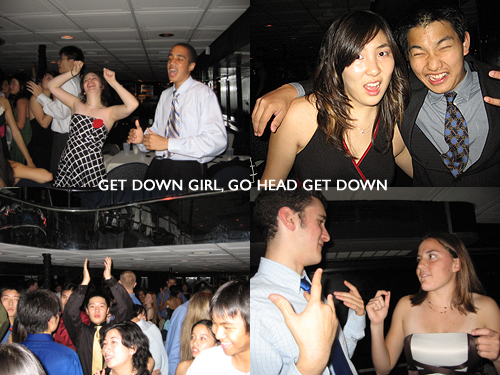 You might remember Curtis ’10 from an old entry of Ben’s, or as the guy voted Most Likely to Cure Cancer; he’s been a good friend of mine since fourth grade. He’s also a genius. To be good at math is to catch a Curtis. We have a lot of those here at MIT, as you might guess, and it’s the coolest thing in the world be sharing a communal bathroom with intellectual giants. 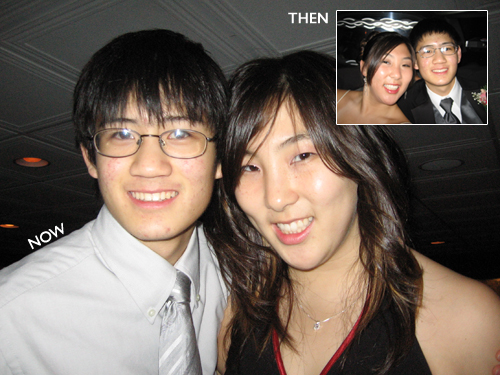 Look at how our hair has grown. A metaphor, for our development as college freshmen, if you will. Isn’t life beautiful?

So I never imagined that writing an entry about being hit in the face by a leaf would cause such a stir, but the other day as I was walking back to my dorm, a stranger stopped me to ask how my face was doing. My mother called to tell me to be more alert (I believe this means I should be taking ninja classes or something of the sort to avoid leaf attacks). My father sent me an email later (cc’d to the rest of my family) beginning with this:

“Once I was walking on a sidewalk when suddenly a huge tree trunk on my face. I avoided cracking my head open by hitting the trunk only by a few seconds. That’s what happens when you don’t pay attention to your situation and surroundings. Don’t let a tree trunk hit your face. ”

My sister and I met up later that night (she’s a student at another university in Cambridge that I affectionately call “The Harv”), during which we had this conversation:

ELSA: Are you okay?
ME: Uh, yeah. Why?
ELSA: Dad told me a tree branch hit you in the face and knocked you unconscious.

I assure you I have been very much alive and kicking, even though I didn’t get to post an entry this week about how a rampant field of grass beat me at the knee.

This questioning took place last night, during which I went with my sister to a stand-up comedy show called Comedy for a Cause, a benefit for the Deep Roots Scholarship Fund. It featured several nationally recognized comedians, including the hugging guy from the Dave Matthews video “Everyday”. So I went. I laughed. And I hugged the hugging guy. 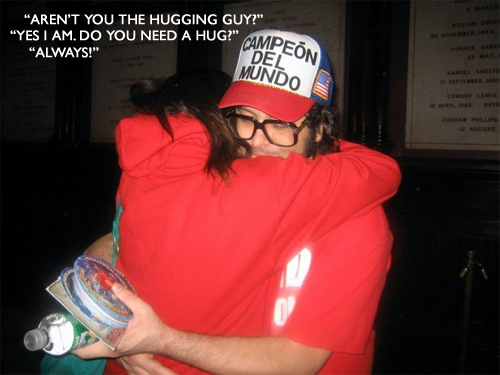 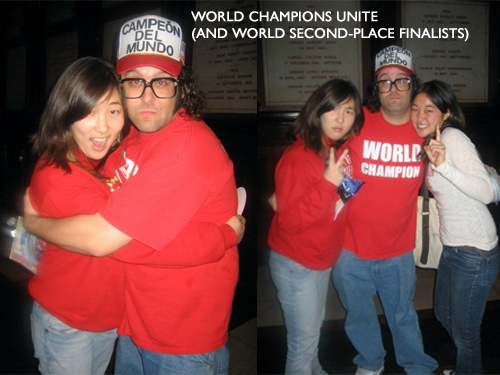 Speaking of famous people I meet and entries on leaves in faces, L spoketh: “Someone besides me listens to Regina Spektor?! Wow.” 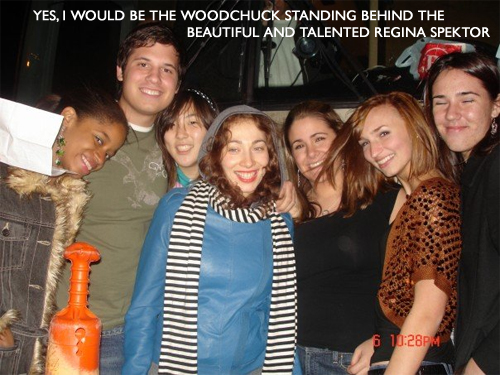 I did write up answers to a bunch of your questions, but I’m going to wait a bit to post them since this one was a bit long and I don’t want to bore you, so feel free to ask me more! If you have a specific topic that you want me to write about, let me know that too. Remember, if you don’t ask, you don’t find out (dun dun dunn). I definitely don’t have all the answers, but I’ll do the best I can to cover all the bases from quantum mechanics to dating and dining food. And don’t stress too much – even here at MIT, we take time off to smell the fall air. 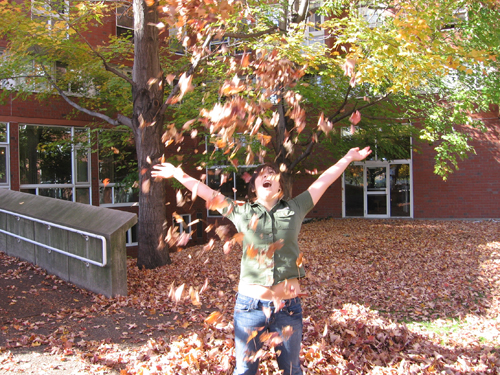