An Early History of International Students at MIT by Yuliya K. '18

MIT accepted its first international student in 1866, only one year after its first classes were held in a storage warehouse. By 1895, 39 from a total of 984 students were international. Three times more students came from Turkey than from Texas.

In 1909, President Maclaurin began his tenure at MIT with a vision to build a more diverse and inclusive Institute and “build a better understanding between countries.” Through his efforts, the number of international students doubled in just ten years. 1 in 15 students at MIT came from a foreign country, possibly the highest proportion of international students in a U.S. institution.

In a 1917 Boston Daily Globe article, the President of the Latin-American Club at MIT stated that “Every Latin-American student at the Tech is just another link between North and South America. … If North and South America stand together they can insure the future peace of the world.” To achieve this ideal, MIT provided admissions pamphlets in Spanish and Chinese, and President Maclaurin traveled the world to recruit foreign students.

Numbers prove MIT’s commitment to diversity, but they cannot tell the stories of the international students who came to the Institute despite historical and geographical hurdles and at a time when, besides learning English, they were also required to learn French and German. Last spring, Professor Emma Teng and Chris Peterson launched a project to highlight MIT’s committment to diversity and inclusivity (see the listing here; also check out Professor Teng’s fascinating research on early Chinese students at MIT). I worked on the project in the summer and over IAP, focusing primarily on creating profiles of early international students.

I’m an immigrant from Ukraine, so it was especially important to me to understand the experiences of the immigrant students who came before me. Instead of telling about administrative diversity efforts and policies, I wanted to tell stories. I wanted to show the contributions that international students made to MIT as outstanding friends, experts in their fields, hard-working professionals, and prominent government figures. Wherever these students went after graduation, they remembered their MIT experiences and stayed in touch with the MIT “boys.” In light of recent draconian anti-immigrant measures, I want to share some of these students’ stories and, through their experiences, affirm MIT’s support of the international and immigrant members of their community.

Two of the students from this post are from the Middle East and two are from Latin America. They graduated between 1888 and 1894. All of the information presented below came from either federal sources or materials from the MIT Archives. A special thanks to the Archives staff!

Nicolas T. Paraschos was funny. Or at least his classmates thought so. The yearbook published by the Class of 1892 featured Paraschos’ joke, three quotes, and a story of his “experiment” included right in the Civil Engineering course history—a record number of mentions!

Despite the yearbook claims, Mr. Paraschos was not a great student. In the MIT Faculty Records (the Committee on Academic Performance records of the time), he’d been informed twice that his record was “very unsatisfactory, and that unless he make marked improvement he cannot be graduated.” And once he was “required to explain absence from examinations.”

Fortunately, Nicolas still graduated in four years (not common at the time) with a thesis titled “Experiments on Resistance of Riveted Joints to Bending.” He had just turned twenty! After graduation, Nicolas moved back to Constantinople, Turkey to become a Civil Engineer, and “few of his old friends [had] been without a hearty invitation to visit him in Constantinople.”

Alas, Nicolas’ friends never got to visit. Nicolas Theophanes Paraschos died less than a year after his graduation of typhoid fever. He was the first Class of 1892 graduate to pass away, and, highlighting his popularity, there were two obituaries about him published in one issue of The Tech. An excerpt from one of the obituaries is included below (it’s funny).

Mr. Paraschos was a prominent figure among his classmates; his was one of those characters whose memory is always the last to die out in the minds of those who knew him. He was the butt of many a good-natured joke, whose thrust, however, he always parried with that zest which simply invites another in this contrary world of ours. He was a simple gentleman, one of Nature’s own, and, though coming as he did from a far off country to cast his manly student lot with that of those whose surroundings were so different, he shone among them all by virtue of his manliness.

Nicolas may have been the funniest member of the Class of 1892, but I hope he is remembered also by his final communication with MIT. The letter below was published in The Tech less than a month before Nicolas’ death. 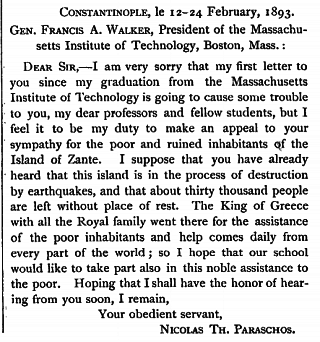 Class of 1894 (originally Class of 1893)
Candidate for an Advanced Degree (graduate) and Bachelor of Science in Course I. Civil Engineering
B. A. from Robert College in Istanbul, Turkey
Extracurricular: Civil Engineering Society (with N.T. Paraschos) 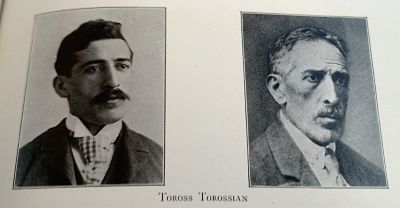 For the first half of his MIT career, Toros was succeeding as both a graduate and undergraduate student. In 1890, Committee on Scholarships recommended him “for the favorable consideration of the Corporation.” In 1891, Toros’ third year at MIT, the Corporation fully covered his tuition, remarkable at a time when scholarship funds were limited. Toros was the only student that year to receive the full tuition award!

Many of the international students at the time struggled with academics at some point in their MIT career, usually around freshman year—adjustment was hard. Fortunately, MIT faculty made accommodations for these students, for example, special examinations and excuses from foreign languages. By contrast, Toros struggled in his senior year. His scholarship application was referred to the executive committee “without recommendations.” The Faculty did not “regard him as a candidate for graduation the present year.” The summer after Toros’ fourth year, the Faculty stated that “his graduation next year [was] very doubtful” (though Toros did graduate in five years, in 1894).

After graduation, Toros experimented with different careers. He started off in the “flour business and industry” in Bulgaria. Then he moved to Persia to do construction work for the Russian government with his brother. The brothers were especially successful because, together, “they were able to speak English, French, German, Russian, Persian, Turkish, Armenian, and Bulgarian languages.”

After six years of construction work, Toros returned briefly to the flour business, but soon became a municipal engineer in a “small down on the Danube” (Lome, Bulgaria). During his five years’ administration, “water supply, sewers, electric lighting, public bath houses and parks were established and a dozen new school houses built.” Toros later wrote to his former MIT classmates, “I see that I might have had a better success if instead of engineering, I had studied architecture at the Institute.”

During this time, Toros also published several articles and “sent several most interesting letters to the Class Secretary, some of which have been published” (and I have yet to find them). One of Toros’ main interests was the “replanning of badly laid out old cities.”

Arroyo, Puerto Rico (before it was a U.S. Territory)

Over a hundred years after Luís Francisco Verges’ death, a fellowship in his name is still given out to any MIT “graduate student conducting work in the field of the sugar industry.” The fellowship includes tuition, student health insurance and a $2,664 stipend. Luís Fransisco Verges was incredibly wealthy.

Luís was also a good student. Unlike Nicolas T. Paraschos, he appeared zero times in the Faculty Records. He graduated in four years, then remained at MIT for another year as an Assistant Instructor in Civil Engineering and was inducted an Honorary Member to the Civil Engineering Society. He looked like this (according to his U.S. passport application): 5 foot 9 inches tall, high forehead, blue eyes, straight nose, medium mouth, round chin, brown hair, medium complexion, and long face.

Luís gained success (and wealth) when he returned to Puerto Rico to continue the sugar business of his father. At the time, the sugar industry in Puerto Rico was booming. Verges made his father’s, as well several other sugar plantations, highly profitable. He was also the director of five different sugar factories and took “an active part in forming the Association of Sugar Growers of Puerto Rico, of which body he was vice-president.”

Class of 1888 (graduated in 1889)
Course VI. Electrical Engineering
Extracurriculars: Advertising Agent for second ever issue of the MIT yearbook, Technique; President of Society of ‘88; Manager of the Afternoon Tech Parties Club; Cadet Officer; Member of ‘88 Class-Day Committee; Member of Annual Class Supper Committee.
Made a toast at the Annual Class Supper titled “The Pin” with the tagline “I do not set my life at a pin’s fee” (from Hamlet). 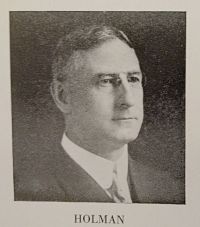 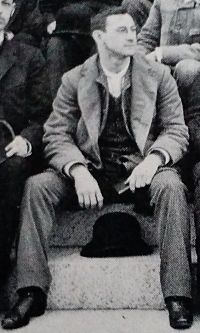 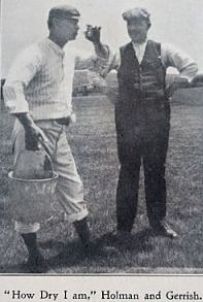 At a time when the average Technology student pursued two extracurriculars, George U.G. Holman pursued six, including two leadership positions—great resume material! Holman’s transcript wasn’t as great. Freshman year, in the Faculty Records, he was “called to his low record in Physics + Mathematics [and] warned that he must improve to be admitted to [Course] VI next year.” In subsequent years George was again “warned that he must show marked improvement to continue” and “informed that he cannot hope for the Degree next year” (he finally graduated in five years in 1889).

After graduating, George switched workplaces frequently, holding eight different positions in two countries between 1898 and 1908. In 1900, he worked at General Electric in New York. Two years later, he served as a Member on the Executive Committee of the Canadian Electrical Society.

George also maintained memberships at multiple engineers’ or other clubs, like the Levis (Canada) Snow-shoe Club (of which he was an Honorary Member). He published five academic papers. And he married an MIT Class of 1892 Alum, who continued working after the marriage and became a noted professional genealogist.

Holman’s life is the dream for a Course VI graduate—even in the 20th century, grades did not affect the employability of Electrical Engineers. And it is best summed up by his former MIT classmates in the 1932 Class of ‘88 History, as part of the Class of ‘88 “A Ballard of Names and Fames.”