The final edition of a nine-part series of articles about the incoming MIT class.

The MIT Class of 2013 has officially arrived! With this day upon us, we conclude the series Introducing the Class of 2013.

Meet Merritt Boyd, the smartest student at North Cross and maybe even all of Roanoke. So smart in fact, that he got accepted into all nine schools he applied to including Stanford, Harvard, Cornell, and Berkeley. He decided to go to college at M.I.T. in Boston.

“The culture of the students I think is something that really drew me there,” said Boyd.

Some say he’s a genius. He doesn’t think so, but plans on studying astrophysics at M.I.T. had to get him to explain exactly what that is.

“Astrophysics is basically the large scale structure of the universe. I’ve always liked to take the telescope out at night and look at the stars so I think astrophysics would be a lot of fun to study,” said Boyd.

Boyd says he’s looking forward to studying at such a challenging School.

“I would rather challenge myself than be challenged,” said Boyd.

Boyd’s mom says today is bittersweet because she’s not looking forward to him leaving Roanoke in the fall.

“I’m very very proud but very sad that he’s going to leave. I’m worried about who’s going to fix our technology problems when he does. Anytime the TV breaks or a computer problems comes up, Merritt fixes it,” said Donna Boyd, Merritt’s mother.

Something she’ll have to figure out in August because Boyd will be seven-hundred miles away, studying things that are a million miles from home.

Just moving to a new apartment can be tough for some folks.

But moving to another country? That’s an adjustment on a whole different level.

It’s a lesson Carlos Garay learned a decade ago when he first arrived in the United States as a 7-year-old from Colombia. At the time, the young Garay wasn’t quite ready for the culture shock he would experience, even among fellow Latinos.

“I did not know English, and the way I spoke Spanish was different from the way Mexicans spoke Spanish, so I was picked on,” Garay said. “It made me lonely, and I just closed up.”

In the years that followed, Garay would redirect the loneliness he felt into a passion for education. That passion would ultimately pay off for the 17-year-old Galena High School student, who now finds himself the recipient of a major scholarship while also being accepted to one of the most prestigious schools in the world.

Last April, Garay was notified about his selection as a Gates Millennium Scholar, an award funded by the Bill and Melinda Gates Foundation. The scholarship was just the second in a string of good news for Garay, who was also notified by the Massachusetts Institute of Technology in December that he had been accepted to the school and qualified for a full financial aid award*.

“When I started reading ‘On behalf of the Admissions Committee,’ I thought, ‘Oh great, I’m going to be rejected,'” Garay said. “So when I got to the part that said I was actually accepted, I was like, ‘Hey, wait a minute’ and read it all over again. I started jumping up and down screaming.”

With his education now financially secure through graduate school, Garay plans to get a jump start by attending a summer program at MIT. Garay said he will be majoring in mechanical engineering with a minor in material science engineering.

“I really like being able to apply what I know, and, basically, that’s what mechanical engineering is,” Garay said. “It’s not developing some grand theory that’s only applicable in the next 100 years. It’s about creating things that work very soon and can hopefully help everyone one day.”

Garay, who currently lives with his mom and 15-year-old brother, said his experience is a testament to the opportunities available in the United States and how anyone can achieve their dreams if they work hard and set their mind to it. Garay said he is especially grateful to his mom for everything she has done for him.

“I don’t think she really understands what MIT is,” Garay said. “But she was very happy. She didn’t go to college and she sacrificed herself completely so I could get to this point.”

An appreciation for education wasn’t the only thing Garay developed during his younger, lonelier days.

No longer the recluse he was back then, Garay also learned the importance of having a social support network, which is one of his top priorities once he reaches MIT. It’s a lesson that has become even more significant for Garay after hearing stories of promising students in prestigious schools such as MIT and Harvard who crash and burn due to personal issues.

“Everyone accepted at schools like MIT has the intellectual capacity to succeed,” Garay said. “But a lot of times, people don’t succeed for other reasons. I want to deal with those problems early on so I don’t have to deal with them later in life.”

One way Garay hopes to do well is by being well-adjusted and not putting too much pressure on himself. Garay admits that his drive to be accepted at a good college or university made him too hard on himself sometimes.

“Now I’m getting used to the idea that even if I’m average at MIT, I can be happy with that. That’s actually a big change for me.”

[Please note: All of MIT’s financial aid is based on financial need; there are no merit scholarships. Reporters are often confused about this. — Matt] 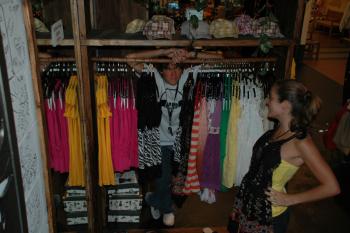 Not only does he manage to earn exceptional grades in advanced placement and honors courses, he is also very active with extra curricular activities and community service all while running his own family business.

His efforts have paid off as he recently received a full scholarship* to MIT, the Massachusetts Institute of Technology, in Cambridge. Although not certain exactly what he will major in, Obropta enjoys math and would like to “build rockets or design planes or something crazy.”

Obropta plays second singles on the high school’s tennis team and has been team captain for the past two years.

Class of 2009 has continually voted him class president for all four years of his high school career. During his time representing his class, he helped to initiate a canned-food drive and plan a winter formal dance in which profits were donated to area churches.

“I don’t know how it all adds up but it works. I’m always doing something,” he said.

Ranking number one in a class of 271, he said he received informal notification that he will be class Valedictorian.

Among his many academic accolades, Obropta is a member of Future Business Leaders of America, National Honor Society, the school math team and science league and the NJ Envirathon, an event in which high school students compete in eco-friendly exercises.

“It’s like an athletic competition but it’s about the outdoors,” he said.

Obropta plays tenor saxophone as a member of the high school’s Jazz ensemble, which plays for area nursing homes and Dennisville Middle School.

“It doesn’t happen all at once,” he said.

Obropta manages to communicate with other student government members throughout the school day, play with the jazz band one night a week and practice tennis three hours everyday.

The coolest thing, he said, is Romp Apparel, a store he manages on 96th Street in Stone Harbor with his sister, Alanna Joslin, 28, who is in charge of female clothing while Obropta concentrates on the male side of the store. Their parents, Ann and Edward, Sr., have their own screen-printing and embroidery business, which is all done in-house, literally right from the Obropta’s home.

Since 2005, when Obropta was only 14-years-old, he has designed the clothing brand, which is focused on a young adult surf and skate demographic with a mini half-pipe right in the store.

“It’s very youth-oriented. We let customers sign their names on the wall when they make a purchase,” he said. “It’s so popular we are running out of space.”

While the business is open seasonally and responsibilities are shared with his sister, Obropta said he also does a lot of behind the scenes work, like attending fashion conventions in Las Vegas to buy the season’s latest looks.

When he is not involved in school and work endeavors, his interests are eclectic, including skim boarding, quad riding, hiking, canoeing and outdoors activities with his family and volunteering at the Cape May Tennis Club.

“I always like to do a lot of everything. I’d get bored doing the same all the time. Working hard and having it pay off feels good,” he said.

Obropta credits his success to his family being extremely supportive.

“My parents don’t force me to do things,” he said. As a matter of fact, he said they occasionally suggest he take it easy.

As with designing clothing, Obropta enjoys visualizing things and making them become a reality. 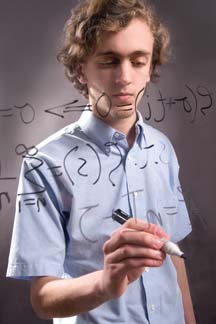 John Berman, a senior at Hoggard High School, knows what it is to be “molistic.” And he also knows how to conjugate the verb “shunk.” Of course neither of these words appears in any English dictionary because they aren’t real words. They are clues to solving problems in the North American Computational Linguistics Olympiad, and getting the right answers to problems like these helped Berman place sixth out of more than 1,000 students in the 2009 national competition.

The placement has won him the opportunity to represent the United States at the Seventh International Linguistics Olympiad to be held in Poland in late July.

Berman said he finds the idea of going to Poland “very, very exciting. I can’t wait.” Recently, the trip got even more exciting when Berman learned he is one of 12 winners of another national competition – the United States of America Mathematical Olympiad. This competition required solving six problems in nine hours over two days.

This test was the third in a series of increasingly challenging mathematical contests. More than 220,000 students worldwide competed in the first round. Of these, about 10,000 were invited to compete in the American Invitational Mathematics Examination.

That contest narrowed the field to 525 who were invited to participate in the prestigious USAMO.

On June 8, the 12 USAMO winners will be honored at an awards ceremony in Washington, D.C., after which they will take the team selection test to determine which six of the 12 students will be on the U.S. International Mathematical Olympiad team in Bremen, Germany.

If Berman is one of the six, he will first compete in Germany in the Mathematical Olympiad in July and then go on to Poland for the Linguistics Olympiad.

While obviously gifted in both disciplines, Berman isn’t wavering about his preference. “My main interest is math,” he said. “I’m going to MIT to get a Ph.D. in math and teach in college.”

He already has a good head start, having completed several math courses at the University of North Carolina Wilmington while still in high school.

According to his father, David Berman, a computer science professor at UNCW, John has been playing with computer games and puzzles since he was about 6 years old.

“I would just throw questions or puzzles out for John to think about without any expectations,” he said. “Play is a lot of the discovery process.”