I got back to campus a few days ago. The journey here from South Dakota was, for the most part, uneventful. I happened to be on the same flight as a friend who had also fled campus for SD in March,⁠01 incidentally, this is the second time I've been on the same flight to MIT as a friend without planning it in advance so we shared an Uber from the airport. MIT Medical was closed by the time we arrived on campus, so we headed straight for our dorm, Next House.

I’d been warned by all of my friends and by all of the informational videos about on-campus living in the fall that there would be a lot of restrictions. Things will be different, they emphasized—there will be biweekly testing, daily health attestations, physical distancing, quarantine week, the whole nine yards. I’d applied to live on-campus knowing this—but deep down, I wondered how it would feel to be back. The cliché goes that “home is where the heart is.” Was home the physical space, or was it the friends that gathered there?

As the elevator doors opened on the 4th floor, however, I saw the duct tape on the wall which marked the entrance to the wing of Next House where I live—⁠02 4W, pronounced “four west”, also known as the Shire. named as such because it is on the west half of the fourth floor of Next. 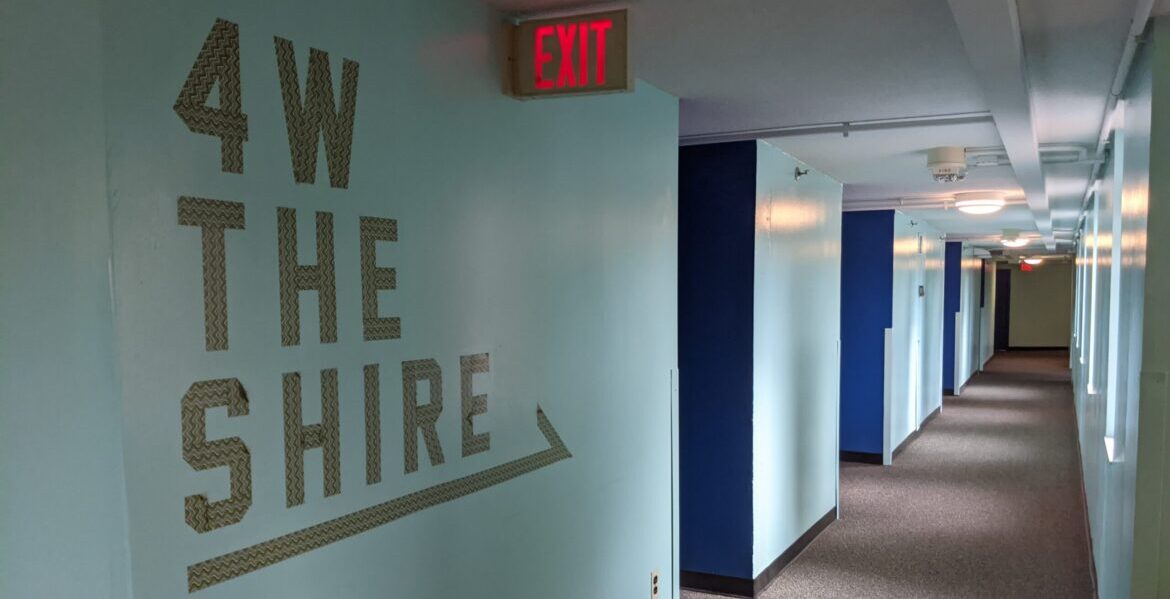 and I was home. Not everything was the same, of course—the beanbags and squishables in the main lounge were gone, as were the chairs at the tables—but there was enough to remind me of everything I had missed about this place. The memories of late nights spent doing problem sets in the main lounge, of study breaks and MarioKart tournaments and everything in between, flooded back to me. Home was here, not because the place had meaning on its own, but because of the memories that had filled it, memories of the community which had sustained me through my freshman year.

The next morning, I walked to MIT Medical to get tested. Medical and Next are on opposite corners of campus, about 0.9 miles⁠03 1.45 km apart, so on the way I had plenty of time to take in everything around me. For the most part, campus looked almost exactly as it did a few months ago, and as I passed through memories replayed themselves around me. It felt like I was exploring campus again—not the physical space, but the stories around it. Psetting on one of the sculptures on Killian Court, hanging out with friends in the East Campus courtyard. Home.

I’ve been in quarantine ever since, waiting for the end of this first week. I haven’t left my room except to get my second COVID test, use the restroom, refill my water bottle, or get dinner.⁠04 Next is known to have one of the best dining halls on campus, and so far the food is still mostly up to par Some things have changed—taking the stairs instead of the elevator, wearing face coverings everywhere outside of my room. Some things remain the same—waking up to the Charles outside my window, the cool refreshing water of the fourth floor elevator lounge water fountain.⁠05 there have been dorm email fights over the quality of the water fountains in various locations throughout Next In spite of it all, the sense hasn’t faded. I’m back. I’m home.

The night when I arrived, I called a few friends of mine who’d lived in 4W with me last year. We talked about the coming semester, our thoughts about the spring, our lives since we’d last spoken. One of my friends talked about his summer UROP and paper writing, another talked about moving to Taiwan and seeing large gatherings of people again. I talked about getting the admissions blogger job and my new room. The call wasn’t long, but our conversations reinforced why I’d attached all this feeling to these buildings and rooms. Home was the physical space—and all the memories and friends we’d made there.

There’s a wooden sign that hangs in our main lounge. On one side, it proudly declares “ye Olde Shire.” On the other, it reads: “a true friend is someone who thinks that you are a good egg even though he knows that you are slightly cracked.” 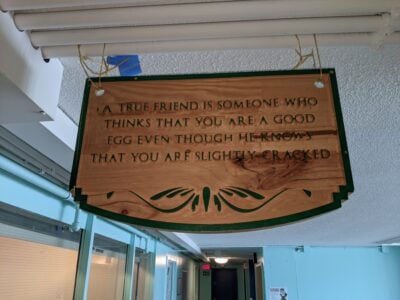 Our circumstances have changed. My friends are distributed across the world, from Taiwan to San Diego to right next door, and I’d much rather see them all together, in person. For now, however, we have Zoom and Messenger and all the communication methods in between. We have new memories to make and new stories to tell. It’s not the same, but it’s still home.