What goes around comes around.

I’ve never been one for actually truly believing in karma (what goes around comes around) but this last Monday pushed me a step or so towards accepting it. Here’s how things played out:

I woke up on Sunday morning with the plague. Well, maybe not the plague, as plague implies that many many many people are sick, but I definitely had some type of illness that made my life (fun)^-1. The only thing worse than being sick and wanting to die is when you add that to the normal stresses of MIT life. Not a lot compares to wanting to just curl up and die while also knowing you need to spend hours working on 8.02, 2.001, and 18.03. But, as any MIT student will tell you, being sick isn’t an excuse to not do homework, so the homework gets done, not exactly fun, and you accept that you are still alive (somebody out there better pick up on this reference).

Consequences to doing homework while ill are varied, one of the big ones being the degree of bitterness that leaks from your temporary low feeling of worth onto your homework. This is what happened to me on Sunday. I was working on this wonderful gem of an invention called Mastering Physics (expect a healthy entry about that shortly) and was faced with this prompt:

Reading Assignments: On each daily webpage there is a summary of the day’s material. These summaries are short and reading them will help prepare you for class. This week’s reading assignment is: Course Notes (Liao et al.): Sections 4.3-4.4; Section 5.5; Sections 6.1-6.4; Expt. 2: Faraday Ice Pail. Questions: What was the most confusing thing that you found in the reading assignment? What other questions do you have about any topics that appeared in the reading assignments? We will make a summary of your responses to the questions below and circulate them among the instructors. We will also try to post responses via the Q/A link on the daily webpages.

Ok, no big deal, I’ll do the reading. Sections 4.3-4.4 went fine, as did 6.1-6.4. Then I read 5.5. I won’t go into detail as to what 5.5 was about, suffice it to say that I was not in a pleasant mood after reading it. I’ll accept that this was probably mostly due to illness, but a lot of it still holds for the healthy. Ready to give Mastering Physics a piece of my mind, I typed the following as a response:

Alright, 5.5 was terrible. People should NOT have to read that. Between the ridiculous notation, the fact that it was located in the middle of a chapter and referenced stuff we hadn’t read, and the length, it was all I could do to prevent myself from hurling my course notes into the Charles River. Hopefully you do a better job explaining capacitance in class than these terrible notes.

So I get to class on Tuesday and see this: 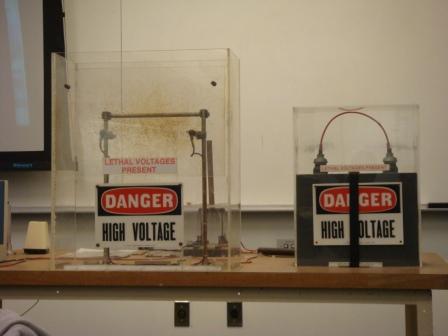 “Interesting, that should be a cool demo!” I mused 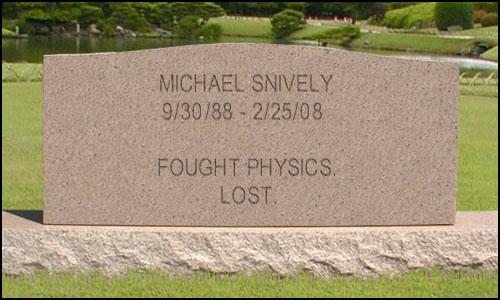 *saunters up to front*

This is when I think the karma started. Now, I could be totally wrong here, but this is what it seems like to me. My professor was sitting at home, in his smoking jacket, on a leather couch next to the fireplace, reading Mastering Physics responses while stroking his cat. He came to mine, read it, and thought “Hm, Mr. Snively doesn’t seem to think that the notes were adequate for learning about capacitance. Well, we’ll have to rectify that in class tomorrow, now won’t we Mr. Snuggles?” *cat purrs, agreeing*

So here I am, holding a lever attached to what appears to be a very large capacitor. My professor backs up. “Don’t pull that until I’m far enough away,” he warned me. Wonderful. Suddenly our demo-lab tech ran into the room and yelled “Wait!” He came over to the demo lab, messed with some knobs, and said “Ok, now it’s good to go.” I’m convinced that I may have died if he hadn’t done whatever he did. He backed up about 50 ft and stood next to our professor. I stood next to the setup-o-death with my hand on a lever.

Biggest explosion you will ever see in a classroom, ever. A wire stretching between the leads of this massive capacitor (that was charged to 3,000 V) vaporized into a shower of sparks and my ears were ringing for a good 5 minutes after pulling the lever. The entire class recoiled, screamed, or shouted obscenities. Nobody was expecting anything of that magnitude, especially me. I walked quietly over to my seat while everybody else looked around wide-eyed, trying to comprehend what just happened. For the next 3 minutes there were little pieces of vaporized wire floating down from the air and landing on our table, a reminder of what had just happened.

Alright karma, help me out here, what’s going to happen to my professor to make up for this?

Ever heard of a Dissectable Leyden Jar? It looks like this:

It consists of a metal ring on the outside, a metal ring on the inside that’s attached to a metal rod thing sticking up, and a beaker between the two. The gist of it is that if you charge the inner ring you have essentially charged a capacitor. You can discharge it by connecting the inner ring to the outer ring. Our professor charged it, but then took it apart into its three components. He then proceeded to rub the metal rings all over himself, tap them together, and ground them pretty effectively. Then he reassembled the makeshift capacitor and discharged it. *CRACK* It had maintained its charge! The class assumed it was magic. I mean, how can you ground something and still maintain the charge? He waited a while before coming back to the demo again, hoping that we had figured out how it worked.

He repeated the procedure, charging the capacitor, disassembling it, and then grounding the metal rings a bunch. We decided that the charge couldn’t possibly be charged in the metal. The only thing left was the beaker, but he picked that up too and proceeded to rub it around and ground it.

We sat there totally confused as he said stuff like “Look! I can do anything I want to this beaker! I can rub it on my head, touch it all around here, touch it against my face, put it — *CRACK!* — Oh ****!”

[cue uproar of laughter from class]

Apparently the charge difference had been stored between the outside and inside of the beaker, and guess where he had accidentally stuck his finger. That’s right, into the beaker. The class, at this point, was dying from the hilarity of it all. Honestly, we had people on the floor, everybody else was at least tearing up. We ended up being dismissed 10 minutes early because I think he realized that no more learning was going to be possible after something like that. We all left, still laughing and talking about the capacitor incident.

So folks, that’s how karma works. It’s like simple harmonic motion, oscillating events of varying unpleasantry between two individuals for as long as it cares to. Just another electrifying day here at the ‘tute.