MIT will help you discover other decidedly non-academic passions too.

While it’s easy to think and talk about the incredible academic opportunities at school when you’re, well, at school; it’s decidedly harder to notice them when you’re not. This shouldn’t surprise anyone, as it’s much akin to trying to appreciate the shirt your friend is wearing when you haven’t seen your friend in a while.

Being away from the ‘tvte does afford the opportunity to appreciate all the other ways MIT has impacted you though, and following a recent trip (we’ll get to that) I’m reminded about the discovery of an entirely unacademic (and some would argue irrational, dangerous, or perhaps even stupid) passion:

See, in my home town of Pearland TX, the highest point of elevation is probably the light bar on top of someone’s jacked-up pickup truck. Driving down some stretches of road are so flat, I swear you can see your own taillights in front of you. Climbing as a sport is essentially non-existent because of the distinct and critical lack of things to climb. Out in West Texas, there are a few famous bouldering places like Hueco Tanks, but that’s 800 miles from Pearland. In short, you don’t climb in TX.

Well that’s not entirely true, there was a rock gym in Houston that I’d been to a few times with some friends for various excursions, but it wasn’t that much different than the sort of thing you’d find at your local YMCA, which is quite a bit different from what actual climbing is like.

Thankfully though, I had just enough exposure at home to find myself not skipping over the climbing PE class one semester here at MIT. It fit into my schedule well, it wasn’t too expensive, and it sounded like it would be a lot of fun. (SPOILER: It was).

Fast forward to the end of the PE class, and I’m buying shoes, filling my amazon wishlist with gear, and climbing at the gym every chance I get. I was hooked. I then discovered that we also had an MIT Outdoors Club that had a bunch of climbers that took trips to do some “real” climbing, and I hopped on the first one I could out to Rumney in New Hampshire. Then the second one to Quincy Quarries here in Boston. And then the third, the fourth….etc.

Why exactly I find myself so enamored with climbing is an excellent question, but it doesn’t really matter. I am. At least in part because I’m amazed at the mechanical devices and physics that make it possible. It’s downright impressive to be able to orient yourself in such a way that you can stand on a dime-edge thick ledge or steady yourself with nothing more than a knuckle in a pocket. I’m so fascinated with it all that I did my undergraduate research project for a class on the effects of knot geometry on the tensile failure strength of static rope. I’m constantly passing rocks or walls thinking about the ways that you could climb them, foot there, hand here, the whole way up.

Which is why when I found myself out in Oregon for the summer, I had one major goal. Climbing out at Smith Rock.

Smith Rock is an absolute mecca for my particular favorite flavor of climbing, which is sport. In sport climbing, routes are bolted and as you climb along, you clip your rope to the bolts so that if you fall the bolt will catch you. Arguably the most famous route at Smith Rock (besides the one on the front of a Clif Bar) is anything that makes you ascend a spire known as Monkey Face. 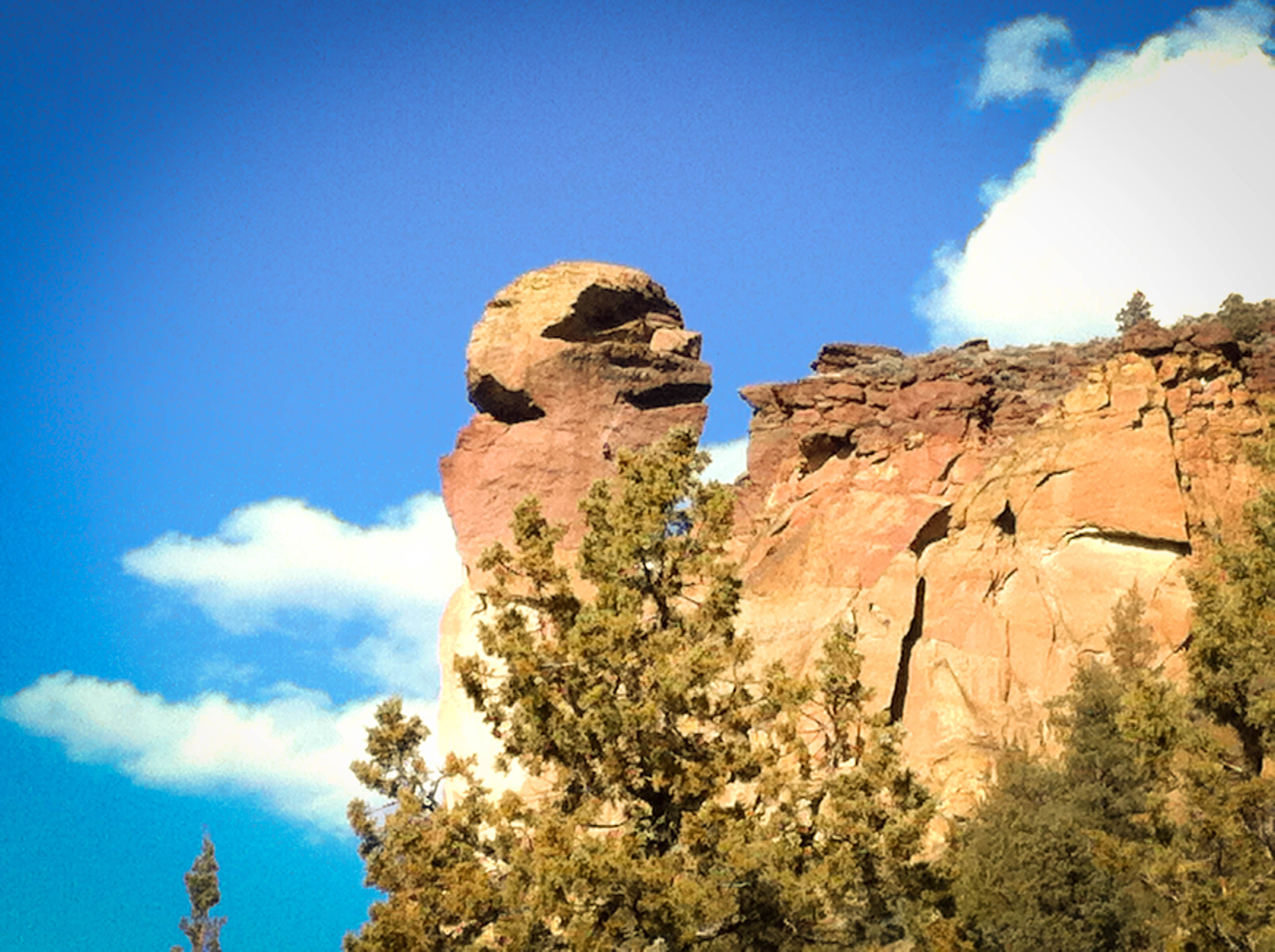 The first time I hiked around and saw it, I knew I had a goal. So this summer, I spent a lot of time training, and gearing up for one last hurrah and I set out to do it. To scale Monkey Face. Here are the photos: 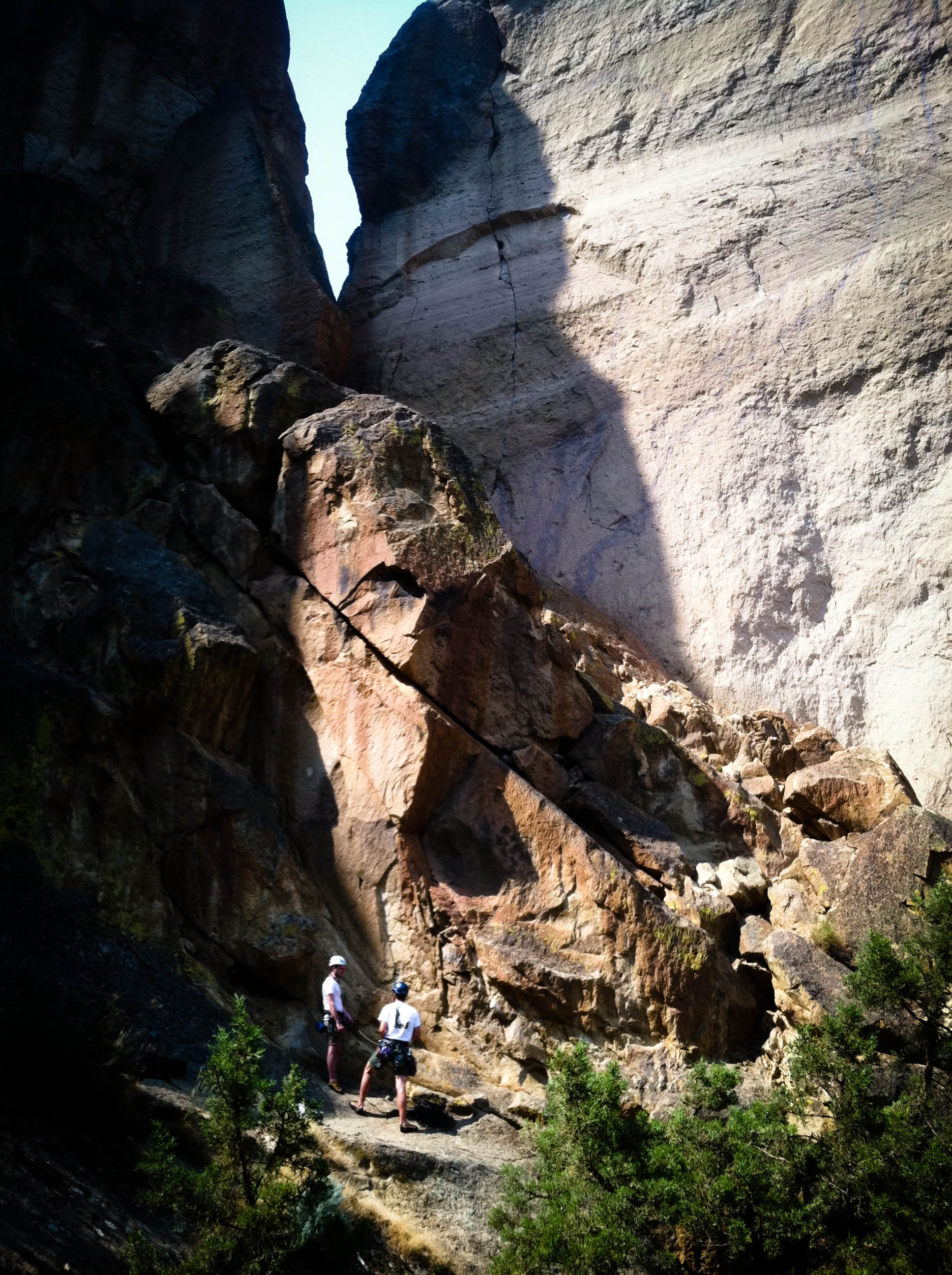 My friend Matt (blue helmet) and I at the base. As it happened, we both have the same shoes and wore white shirts. If only he had worn khaki shorts, we’d look like a team. We discussed a game plan and laid out the gear we’d need. All that was left to do was get climbing. Easy Peasy. 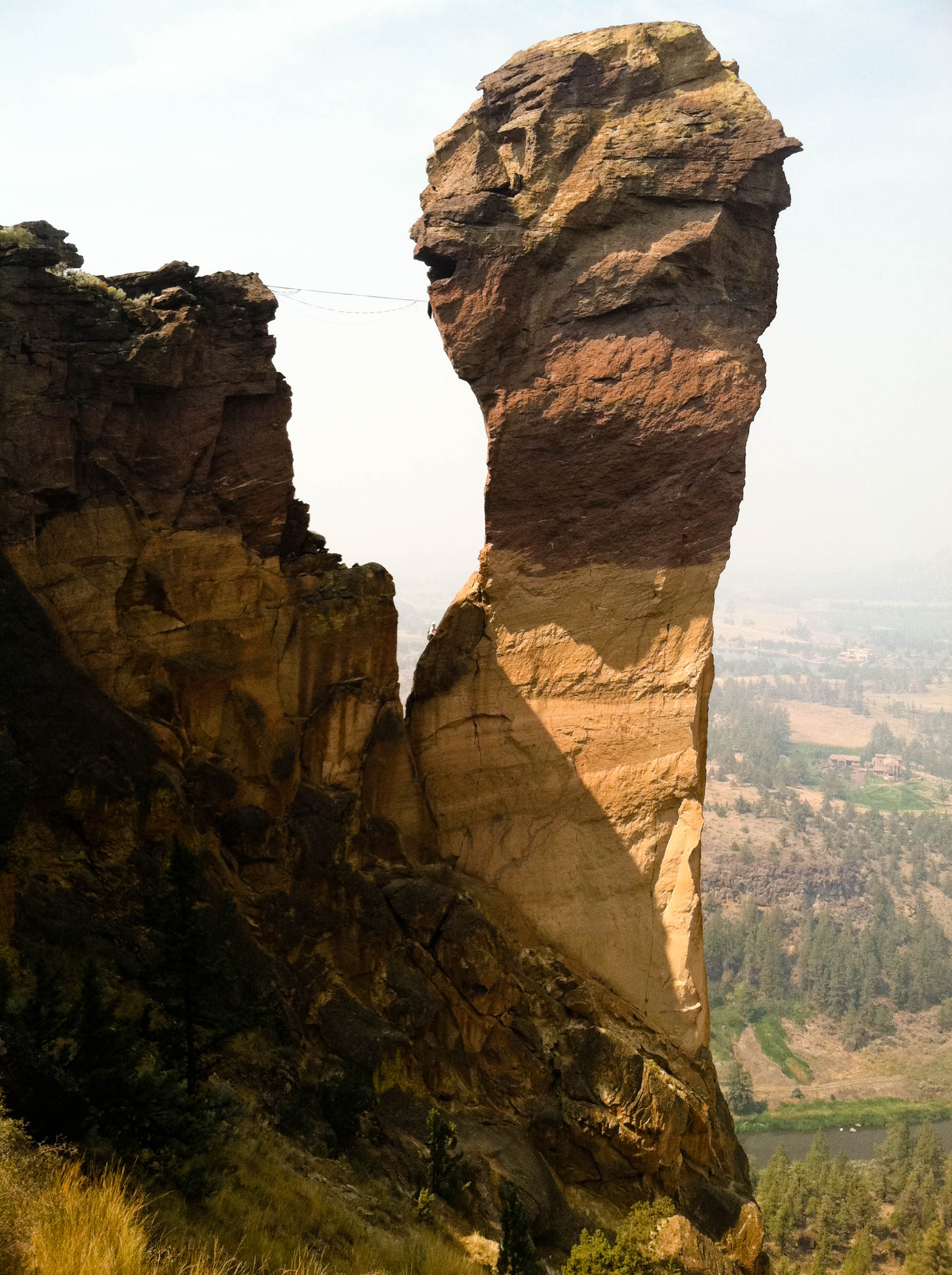 Here I’m nearly finished with the first pitch (I’m the tiny dot near the notch in the mountain. 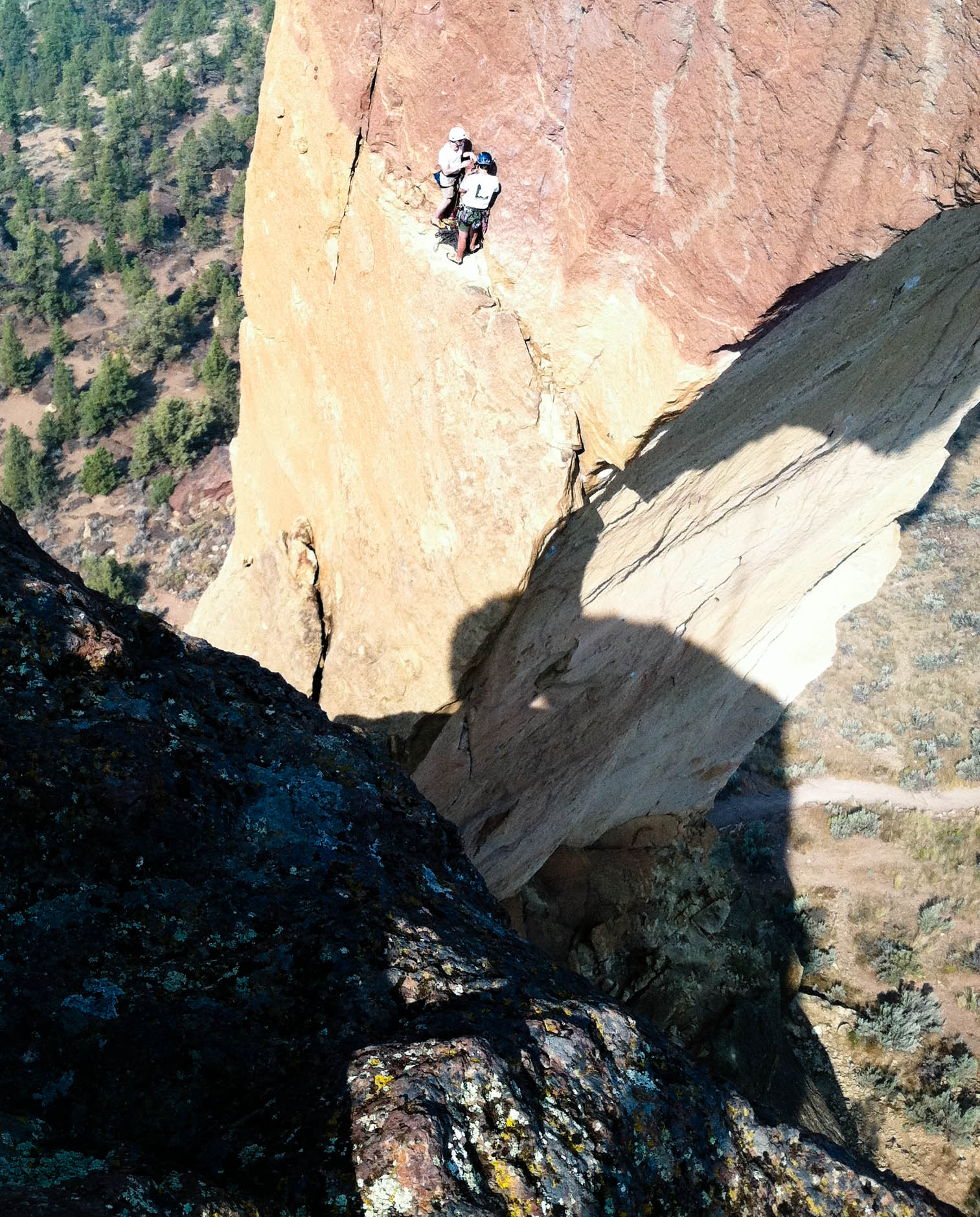 The top of that first pitch leads to this pleasantly wide (though it doesn’t look like it) ledge that makes for a great belay station. It was wide and solid enough that I thought I’d go ahead and take a picture off the top: 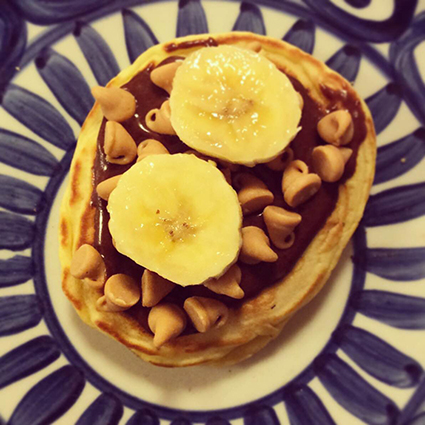 Those would be my feet, our rope flaked in front of me, and a long way down. The most bizarre part of climbing big walls is seeing birds flying at eye level or beneath you. I don’t think I’ll ever get used to it.

Interesting thing about my shoes, they’re a good 2 sizes smaller than my street shoes. They’re uncomfortably tight, but they’re so snug and stiff that I can stand on the smallest of ledges, which understandably helps a lot in climbing.

Of course, you can’t hang out here forever, we’ve got spires to climb! So up I went: 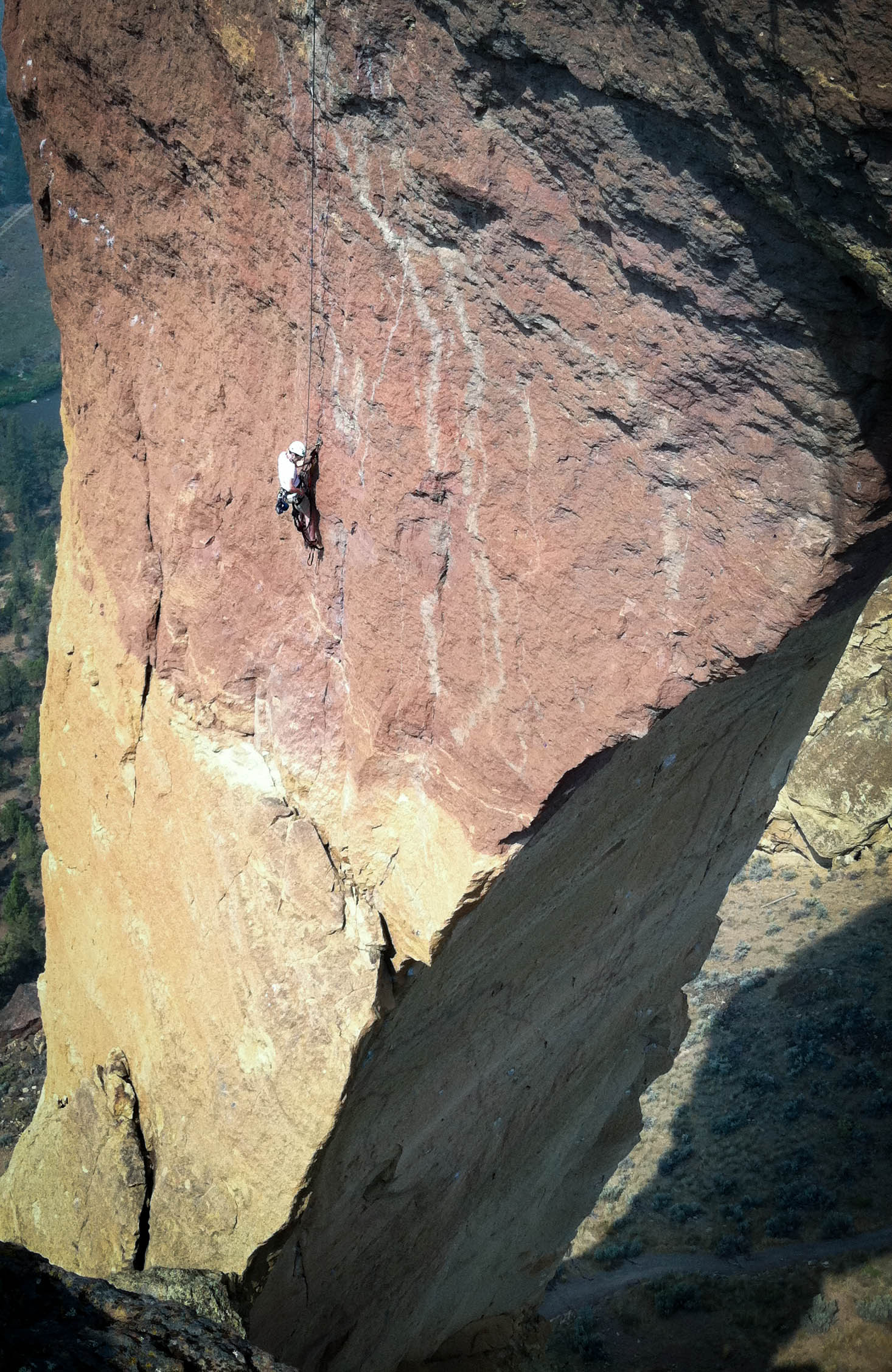 So here I am cleaning our clips (called quickdraws, or just draws) out of the bolts as I make my way up to the cave. It was a long pitch that was complicated by the occasional gust of wind whipping through the notch. But thankfully I made it: 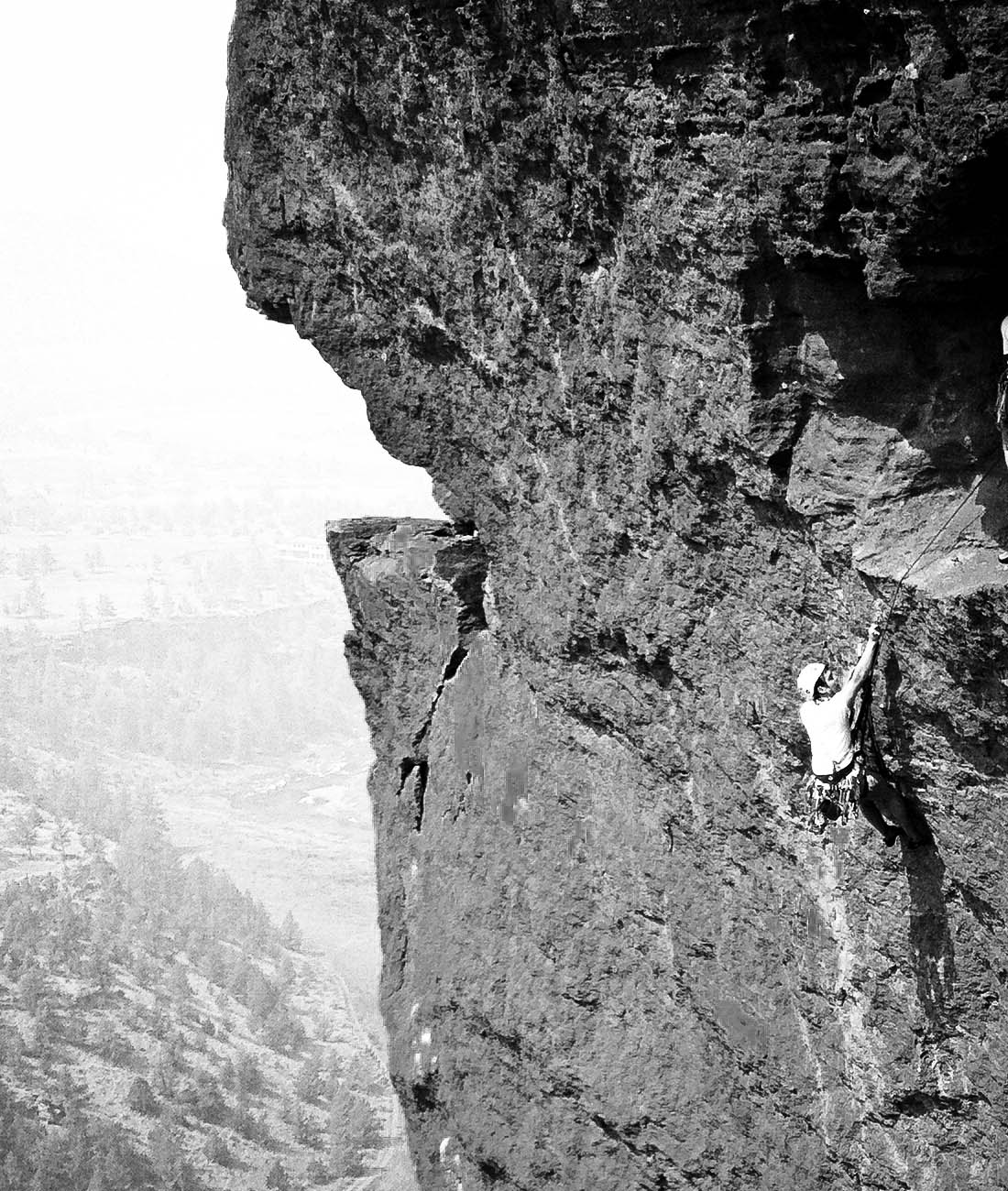 The funny thing about looking at these pictures is that it doesn’t seem that high while you’re climbing. The whole time you’re basically pressed up against the wall inching your way along, so you don’t really notice the altitude you’re gaining. Well, that’s mostly true. At one point along this climb, you have to exit the cave at an acute angle, which means you are forced to look down and realize that you’re a few thousand feet in the air. It’s aptly named Panic Point. 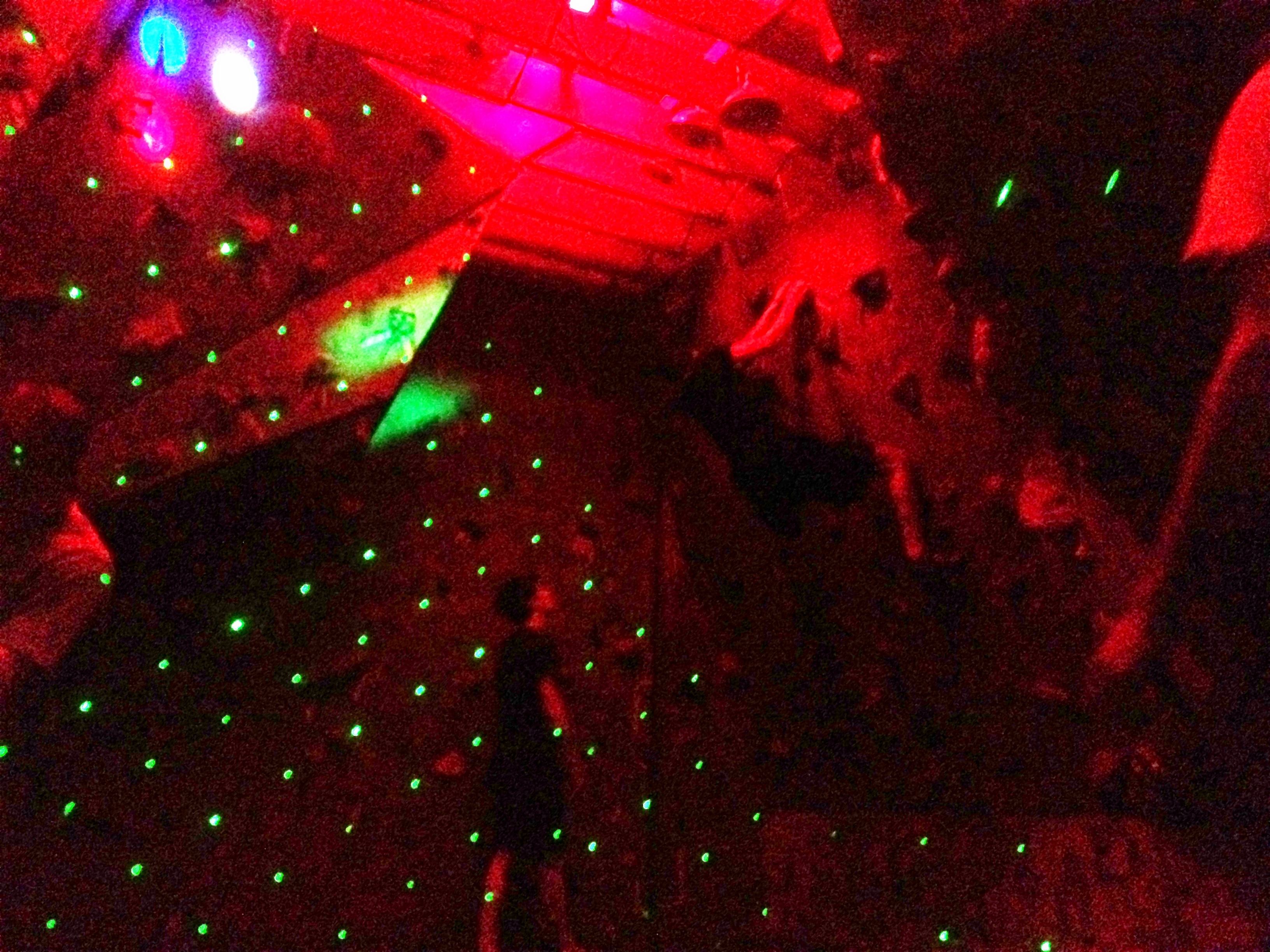 Here I am moving through the aforementioned panic point, which is definitely the hardest part of the climb. The overhang makes it tiring on your arms, compounded by the fact that you’re tired from just having done the long pitch all the way up. Nevertheless it was the high point, struggling through that moment where you know that if you can just get past here it’s smooth sailing is nothing short of a rush. From there it was just a short, easy scramble to the top where Matt and I enjoyed the view and had lunch:

Not a bad place to grab a bite if I do say so myself. I highly recommend it. Of course, if the pictures don’t do it for you, I also made a slideshow with some video that you can check out here:

The move out of Panic Point comes along at 1:13, and of course there’s the glorious rappel at the end, which is one of the best parts of any long route like this.
All in all, it was a hilight of my climbing experiences so far, and I probably wouldn’t have discovered it without being here at MIT. It’s one of the most amazing and unsung parts of the community here; the breadth and depth of it’s diversity. If you have a passion, there are probably others here with it, and if you’re looking for a new one you can probably find one. Oh and by the way, I’m not the only MIT affiliate who also climbs.