Up to decision night!

Decisions are coming. That means a lot.

It means that several thousand of you have applied. You’ve poured hours and hours into your application, stressing and laboring over tiny details. If you’re like me, you’ve frantically emailed the admissions office after realizing you made a horrible off-by-one error on your application:

But even if you didn’t discover disastrous dates, you’re probably still nervous: decisions come out in just two days. You’ve probably replayed every possible scenario out in your mind: maybe you’re accepted, and you envision yourself instantly getting a job offer from Apple and a congratulatory call from the President, with the mayor throwing a confetti parade outside your door. Or maybe you’re deferred, and you get trapped in an endless purgatory, living in torturous limbo for an eternity before inevitably executed. Or you’re not accepted, and the depths of hell open to swallow you whole, rejecting you from all possible opportunity, fun, or success. Ever.

Good news: none of these will happen.

Better news: everything is going to be OK.

Best news: you can afford to relax.

I read an interesting article in the New York Times a few weeks ago. You all should check it out, and rejoice at the number near the end: according to the author, an entire eighty percent of well-qualified applicants are admitted to at least one top college. Admittedly, the definitions of “well-qualified” and “top school” are subjective, but the point still remains. Getting rejected from a top school, particularly MIT, isn’t a career catastrophe. There’s an entire world out there that doesn’t care whether you got into MIT or not. I loved Eric’s post last year: don’t allow your decision define you as a person. You’re not a god just because you got in, and you aren’t a worthless plebian just because you didn’t. After Saturday, you’ll still be the same person you are today, so cling to your dreams for dear life, meet your decision head-on, and emerge with them still intact.

Sorry for the “Admittedly” pun back there. I just can’t help myself sometimes.

But no matter how much we tell you to relax – let’s face it – you aren’t going to. So, to distract from the impending decisions, let’s cover some procrastination tips, brought to you by Someone Who’s Been Doing This All Semester, yours truly!

These are particularly helpful for passing the time on the morning of decision day. Have you not watched all three Lord of the Rings Extended Editions in a row? Now is your chance! Better yet, alternate movies (or even scenes) with the Harry Potter films to confuse your friends and relatives! If they look lost, just inform them that Harry and Ron have to take the Ring to Mordor, but Dobby wants the Precious for himself. Nazgul and Dementors are also the exact same thing; interchange them as you like.

In stark contrast to mindlessly lounging on a couch, you could try taking a hike somewhere new or nature-like. It doesn’t have to be far, as long as it’s peaceful. I whiled away many pre-decision hours by taking my dog on long walks. It’s beautiful, refreshing, and, most importantly, gives a breath of perspective. Even if I had been rejected, my dog would still have loved me.

Why not get an early start on sharpening your pranking skills? Nothing releases inner tension like unleashing it on unsuspecting (former) friends, so pick a target, make a plan, and execute a good-natured surprise. I say this because I just walked into my room and found my bed to be covered in playing cards, inside and out, between every single bedsheet, blanket, and pillowcase. Thanks Sam ‘18 and Jeff ‘18: you’re great roommates. To be fair, I’ve had this coming for a long time, since my obsession with learning how to properly throw cards has lead to 1) many, many vicious card-fights, 2) occasional unintended injuries, and 3) a tendency to leave several decks scattered over our room’s floor, creating both a tripping hazard and a gloriously effective slip-n-slide. This was taken on one of our better days: 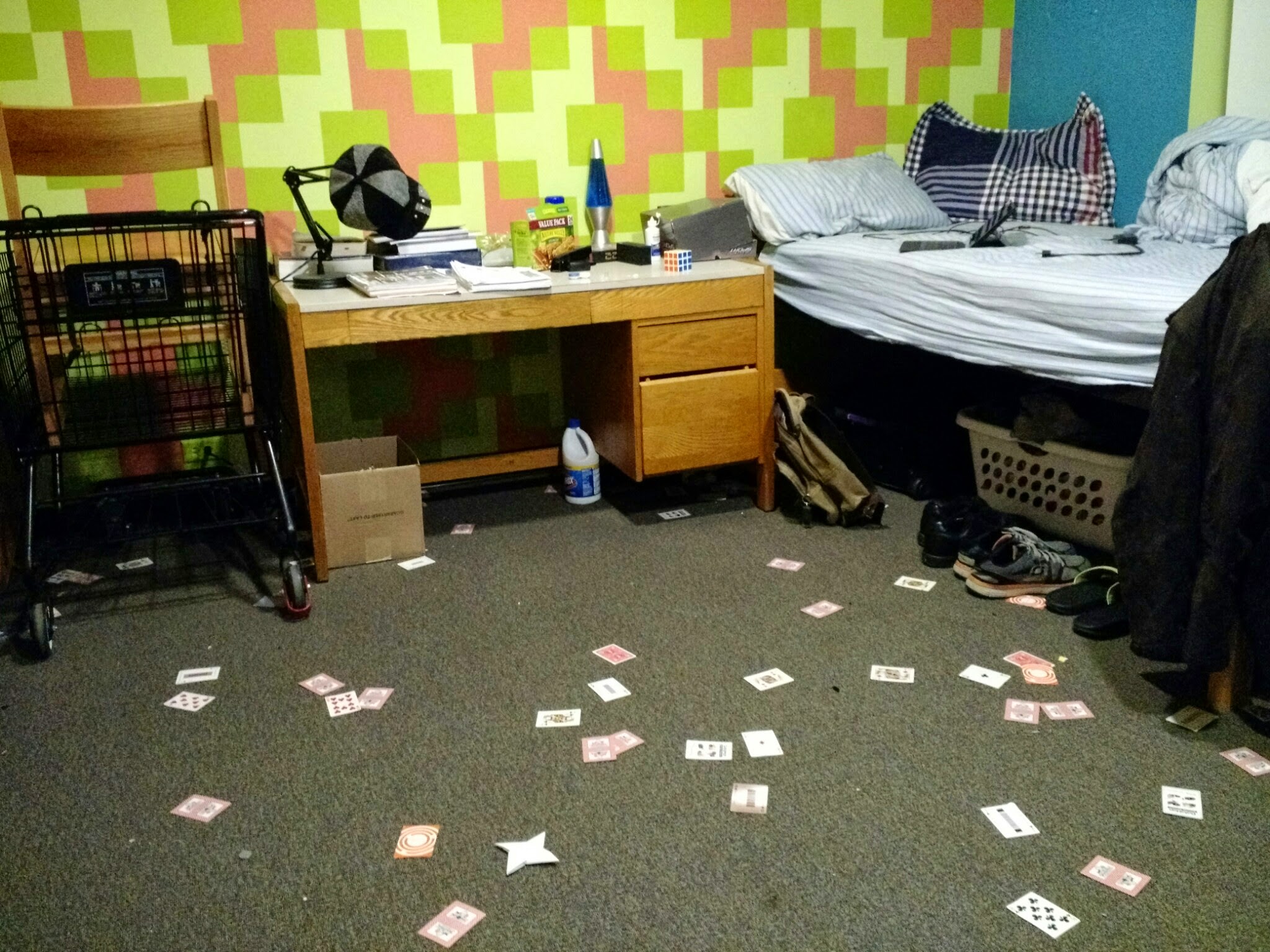 What’s that in the corner? It looks like a shopping cart. That’s odd (maybe this title actually makes sense?), and is a great segue to my last procrastination tip, which is:

I’m a huge fan of doing random things spontaneously, even if it is only to keep people on their toes and to prove to myself that I do, in fact, have free will. For example, on a whim, I recently… ah… adopted a shopping cart and have been using it as a mode of transportation. This week, using the perfect combination of elevators, ramps, bribes, and persuasion, I traveled from my bed (on the third of Burton Conner) to MacGregor’s convenience store, shopped around, purchased ice cream, and returned to my suite without ever touching the ground (huge thanks to Eric ‘16 who pushed me the whole way). Not only was it great fun to ride in a chariot, it was priceless to see the reactions of passers-by on the sidewalk. Others on the floor took the idea and ran with it (they also took the cart and ran with it), inventing the highly sketchy sport of cart-surfing, illustrated in inexcusably poor quality here.

So try it! Not a shopping cart, because I did that and it’s not original anymore, but with something else that’s quirky and random and fun. It’s a great way to waste time and you’re sure to get a laugh and a memory. And maybe a bruise.

Be safe. But not too safe.