Sorry for not having posted recently. It’s gotten to the point where the work is completely overwhelming and any time not spent working is time that feels like it’s being wasted. As such, I decided to take most of Friday and all of Saturday completely off. Yes, that screws me for today, and possibly all of next week (Playsentations soon? Do we have a toy that is even close to being kinda done? Oh boy.) but there’s just too much that’s been going on not to blog about it. Seriously, you should have seen the campus the last two days, it was insanity. Third Eye Blind, Leeroy Jenkins, sunshiny weather, MTV promoting a concert, cell phone vendors hocking products, lot’s of bustle. Saturday evening most of the bustle had died down (except for “Banned in Boston” which had taken over Kresge auditorium and looked very fancy (free food and nice outfits) and I was heading back to the dorm. As I walked by the student center I saw a huge chalk message (not unlike the hundreds of chalk messages littering the campus) scrawled out on the wall screaming “AXO Lip Sync Saturday Night at 8!” I check my watch. 7:45pm. Oh why not.

I went over to Johnson ice rink, bought my tickets, and headed inside. More sorority girls than I had ever seen in my life! Seriously, I think most of them may have come. I chatted with some friends and hung out waiting for the show to start when Melis runs up to me.

Melis: “Snively, are you blogging this?”
My brain: *Hey! Melis is here, cool! She’ll probably want to blog this. Wait, what’s that yellow thing pinned to her shirt? That looks like the captain planet symbol. Why is she wearing . . . ooooooohhhh! She’s in AXO, I’ll get to see Melis dance! I should probably blog this.*
Me: “Absolutely I am!”

I settled down and waited for the show to start. Since Melis is a senior her role was a little different. She helped perform during the breaks between acts. It was quite the struggle between the power rangers and captain planet’s team (one that was really confusing and kind of strange from time to time) so I strung all the bits of it together for you to enjoy. With that, enjoy!

As the show went on there were Course 1 pre-Kindergarteners, Swimmers, Nu Deltas, EMTs, and all sorts of jumping, dancing, and syncing groups. A couple were kinda strange.

Towards the end they announced that Burton 1 would perform next.

Who lives on Burton 1 everybody? If you consider yourself a blog stalker then you know the answer to this question. Without further ado, here’s Burton 1’s performance at the AXO 2008 Lip Sync.

In the end it was Nu Delta and the swim team who took the prizes home (lotso gift certificates) and every body chatted happily about all the ridiculous things they just witnessed. 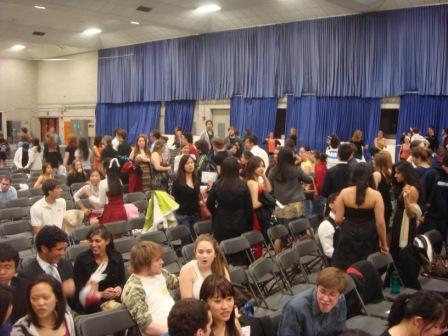 I went back to the dorm after an extremely long day (details of which will be blogged shortly) and then crashed on the couch. And by crashed I mean I watched dramatic lemur a bunch of times,

concerned people in the lounge that I may be a complete lost cause on the internet, and then eventually went to bed. It was a good day, quickly to be squashed by the hellish workload that is the rest of the year. Now if you’ll excuse me, I have to fill out all sorts of paperwork for my mandatory drug test for my Hasbro job. Ciao!