AKA, the "Magic Pen"

‘sup yall? Sorry I haven’t blogged lately. The truth? I’ve been enjoying the laziest IAP I can muster. I sleep until at least noon every day, I’m not registered for any classes until next week, and I have absolutely no commitments. Last year I was overzealous and did the typical MIT “Look at at all this free time I have! I’m going to fill it to the brim with awesome stuff. . . .wait . . . .now I’m busier than I was all semester! AHHHHHH!” No, this IAP I’m very much not busy, and it is wonderful.

A flashback to a previous entry is probably a good way to begin this one. Remember when I was a contestant in a blogging scholarship a while back? In the end I got a very commanding 4th place out of 20, and I couldn’t have done it without all your help. I feel kind of guilty begging for so many votes, but in the end it all worked out (I hope!). My prize was $100 sent via PayPal the day right after the contest ended. Woo! $100! One of my charms is that I have absolutely no responsibility when it comes to money. If I have it, I spend it. Ask anybody who lives with me, I’m pretty awful. I have an R2-D2 trashcan that cost quite a bit of money, I went out and impulse bought a new Macbook, same with a pair of roller blades, I went out and got a hamster last week, and I’ve got enough geek points built up to get some of the cool expensive stuff (if I didn’t still want to save them up!). The point is, $100 of prize money wasn’t going to last very long.

I was surfing Engadget the day or two after getting the money and saw an ad for some smart pen, something called the “Pulse Smart Pen.” I did something I don’t usually do and I clicked the ad.

I’m generally pretty skeptical of devices that seem “magical,” i.e. they do things that I don’t understand and employ technology that boggles the mind. This pen fit into that category. Supposedly, it remembers everything you write and syncs it to your computer to be used later in a digital format. It also records whatever is being said and maps it to the notes you’re taking. All it takes is a tap on a word you’ve written to hear what was being said when you wrote it.

When I was researching laptops for MIT I was dead set on getting a tablet. I researched tablets more than anything I’d ever researched before. I was e-mailing execs, MIT profs, reading reviews, and printing dozens of pages of fact sheets. In the end, it just wasn’t meant to be, the graphics cards weren’t powerful enough, but I still mourned the loss of being able to take notes on a computer screen and have a digital copy of everything. If this pen did what it said it could, then it may be the answer to my problems.

I wasn’t willing to plop down $150 on a pen that was gimmicky though, so I did some homework. Step one when researching technology, Cnet.com. 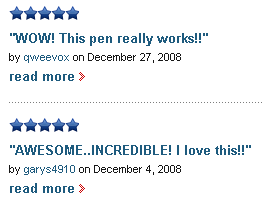 Ok, this is a good sign. Next was PCWorld,

Ok, also good. I continued looking around and realized that everybody said this pen did exactly what it said it did, and it did it well. It was decided, my $100 blog scholarship money would go towards this new pen. Lucky for me, MIT’s bookstore sells these things (I remember seeing the display at the beginning of the semester and scoffing. Oops), so I headed over to the Coop, slapped down the dough, and walked out with a new toy.

This pen, hands down, is the most amazing and potentially beneficial note-taking tool I’ve ever seen in my life. Everybody I’ve shown it to seems to think so as well. My parents think it will become the standard writing tool of almost all students within the next couple of years. No, seriously, I sound like a commercial, but enough of you asked about this thing in Chris’s entry that I’m going to shamelessly plug this pen because, frankly, I believe it’s an amazing tool for this place (MIT) and your life would be improved if you got one. Skeptical? Good. Let me change your mind.

Here’s the important stuff that you get in your box. You get: 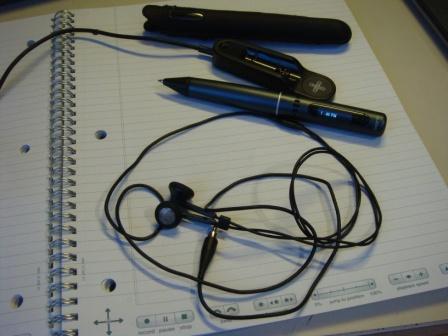 You’ll notice that the pen has a little screen on it. The picture is too small, but it’s currently displaying the time, its default display. 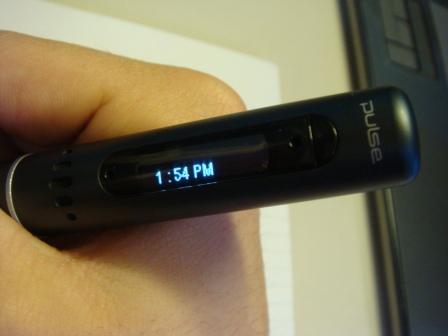 This next bit of explanation is better actually demoed by a human being than by pictures and text, so I’ve decided to make some little videos for you.

Have you ever noticed how weird it is to hear yourself recorded or on video? Right, anyway, moving on. People have asked “Why not just use a tablet and a microphone?” That’s a totally legitimate question, and the answer is that you could. Some benefits, however, to the pen are that you have two copies, paper and digital, where as with a tablet you just have one copy. Also, tablets cost WAY more than $150!

“How’s the battery life?”
I can go all day without having to recharge the battery. It’ll last for a day and will charge when the pen is docked.

“Well it’s toast if it runs out of ink.”
Nope. Replaceable ink cartridges included and for sale.

“This seems too good to be true.”
Seems that way, doesn’t it? I think this is one of those rare cases where you are actually buying exactly what they say you are buying. In fact, there are even a bunch of MIT students that work for Livescribe and worked on this pen.

I used my pen for the last 3 weeks of class and have to say, I’ve enjoyed it very much. I’ve even used it to answer a comment question or two in previous entries (remember when I posted my 2.005 final review outline?

Check out the Livescribe website for more details, but seriously consider getting this pen. No, you don’t need it, but it’s so nice! And it actually does what it says it does. Almost everybody I’ve shown it to in person has decided to get one (ahem, Chris) and everybody I’ve talked to who has one loves it.

Ta-ta for now, I’m getting back to doing nothing during my IAP! Oh, and keep this coming Friday afternoon, Saturday, and Sunday open because it’s Mystery Hunt time and I’ll be publishing some puzzles for you guys to help with!