Brief background: I try to be healthy. I don’t eat junk food, and I do sit-ups in the mornings. About a month ago, I got the crazy idea to take my healthy lifestyle to the next level and train for the Boston Marathon. Granted, the marathon isn’t until April, but I have my work cut out for me. A marathon has 26 miles. Half a year has 26 weeks. Coincidence? I think not.

These are the shoes that, until today, I wore when I went running. They aren’t bad, but they’re worn down from several years of use, and they’re not intended for long distance running. 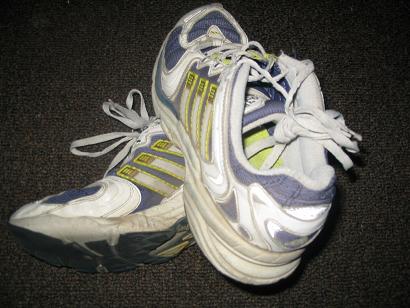 I decided to go into Boston and buy new shoes from Marathon Sports.

They have won the “Best of Boston” award (given by Boston Magazine) in the “Running Store” category for the past 5 years. I’m not sure how much competition they have in this category, but a winner is a winner. 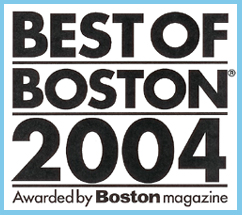 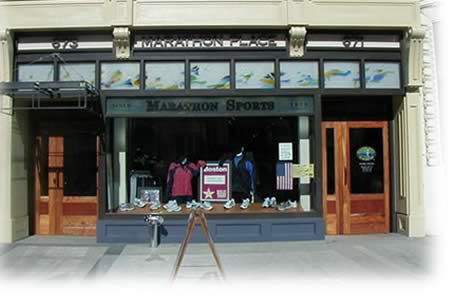 The store is located really close to MIT, so after classes today I walked there. I guess if I’m training to run 26.2 miles, I shouldn’t consider walking 1.3 a big deal. 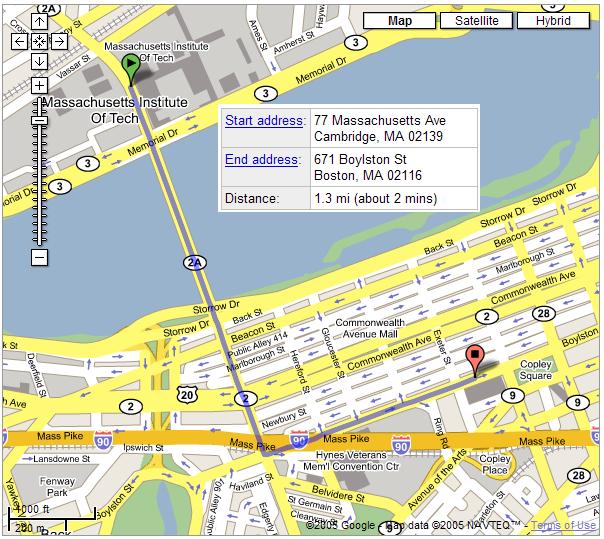 As soon as I entered the store, a friendly salesman asked me if he could help. He had me walk barefoot for about a minute and a half so he could watch my “gait” and determine my pronation (which, thanks to 5.12: Organic Chemistry, I mistakenly pronounced “protonation“). Apparently I have really balanced pronation, and neither over- nor under-pronate. Maybe this explains why I’m able to power-walk a 7 minute mile. Oh wait, that’s Spencer.

He recommended that I switch into running shorts to make trying out the new shoes easier. I thought I would just walk around in them, so I thought, “Okay, whatever.” The guy basically wanted me to run an entire workout in each pair of shoes. First, I ran on the Marathon Sports treadmill. It’s one thing to run on a machine in the Z Center, but another thing to run in a nice shirt inside of a shoe store. Also, this was not your grandma’s treadmill (unless this is your grandma), and the default speed was pretty fast. After that, he told me to go run outside on the concrete sidewalk. From waist-up, I was obviously not prepared for this. This was on Boylston, which is a pretty busy street. Plenty of people were outside eating lunch, running errands, etc. Interesting note: It was about 85 degrees outside while I was there. I jogged around the block three additional times with three different pairs of shoes. Though it was pretty embarrassing, I figured that falling flat on my face in front of thousands of people during the Boston Marathon would be an order of magniture more embarrassing, so I did it. (And they say consumers aren’t rational!)

So anyway, I ended up buying a pair of shoes, plus the shorts I had randomly chosen just so I could run in the store. (They’re on to something with that system.) I should mention that Marathon Sports gives MIT students a 10% discount =)

Check out my beautiful new shoes: 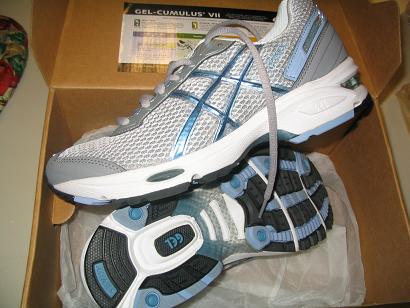 (Actually, I think they’re pretty ugly, but as Sam said, “Does Manolo Blahnik make running shoes? I think not.” Obviously Sam has not seen the episode of Sex and the City in which Carrie Bradshaw runs a 5K.)

My new running shorts are already being put to good use, as evidenced below: 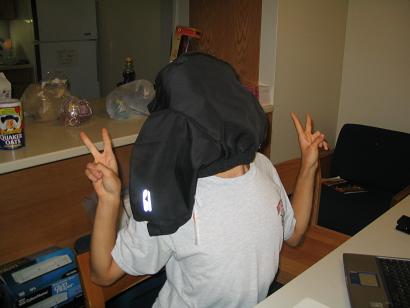 Here’s my running log for September 2005. I run short runs 5-6 days a week, and then over the weekend I run a long run, to which I add a mile every week. 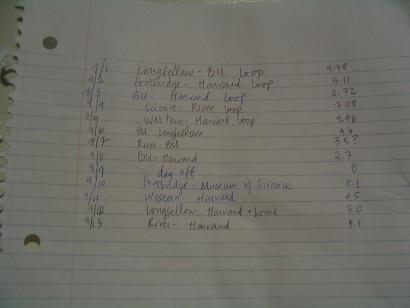 Boston actually is really well equipped to handle outdoor running (… except for that whole snow thing). There are a series of bridges that go over the Charles River and allow runners to run along the water and steadily increase their mileage. 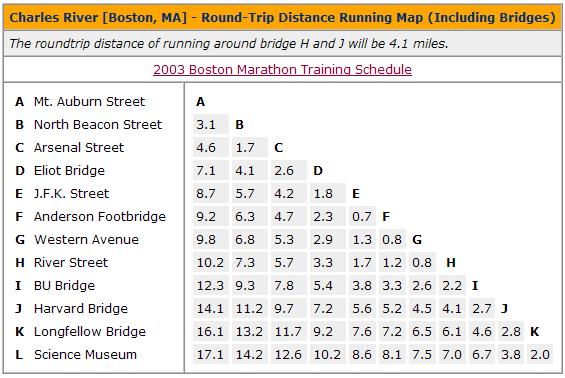 The blog can’t handle the width of these images, but you can see the full chart and a large map here: http://www.soundkeepers.com/running/boston.html.

It’s not safe to run late at night, but it sure is pretty. 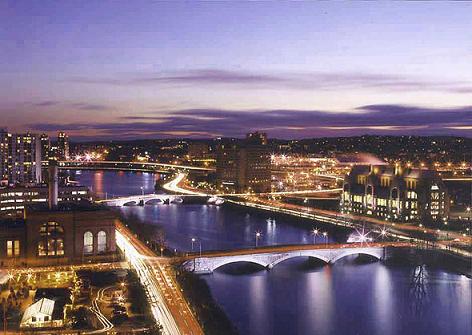 Wish us luck with the marathon training!