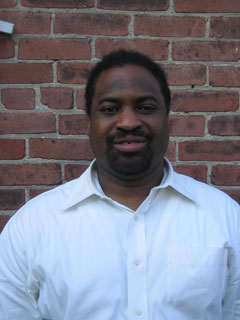 Favorite thing about MIT: The Infinite Corridor actually ends… in a parking lot

Favorite thing about Boston: Bostonians only have a 25 Letter alphabet. No one knows what happened to the letter R but many speculate it suffered the same fate as Tyrannosaurus rex. In fact, it was not until Sesame Street began broadcasting 30 years ago that Bostonians even became aware of its existence.

Favorite movies: Too many to name… Here are a few: Seventh Samurai, Dr. Strangelove, The Empire Strikes Back, Hollywood Shuffle, Seven, The Godfather, So I Married An Ax Murder, Love Jones, Dolomite. If you ever need to settle a bet about a move, I suggest the following website: The Internet Movie Database

Favorite music: This is tough… I own over 600 CD’s and 20 Box Sets. Anything by the following artists: A Tribe Called Quest, Ella Fitzgerald, Al Green, Stevie Ray Vaughn, The entire Stax label, John Coltrane, Jay-Z, Jill Scott and Sade.

Favorite cartoon character: Boondocks. Aaron McGruder gets it. Satire is supposed to leave a mark.

Advice about applying to college/MIT: (Time for me to be serious) I have 3 points:

1. Put a lot of time and effort into crafting your personal statement. While it may seem like a chore at first, remember that everything in you application is being said about you. Your essays are the only time that you get to speak directly to admissions committee. Make your voice count! Don’t use your whole essay telling us what you want to do after college (E.g. I want to be a thoracic surgeon helping the indigenous population of the Republic of Kiribati). Instead use your voice to tell us what you are passionate about studying at MIT.

2. Yes, we really do look at more that your standardized scores. We are looking for well-rounded students. Since we focus on so much more that the SAT, I suggest that you do the same.

3. Don’t let the cost of an institution determine where you apply. There are only three ways to know that you can’t afford a College/University: First you apply, second you are accepted (and most importantly) third you receive and review the financial aid package.

Fun fact about yourself: I am Airborne Qualified (I can jump from perfectly good aircraft while in flight), in high school I participated in a program called Youth in Government and (to my knowledge) I am the only person elected Governor of two states, New York and Delaware, I love Star Trek, the New York Giants and the New York Mets. Finally, I’ve lived in Queens, NY; Newark, DE; Seattle, WA; Seoul, Republic of Korea, Indianapolis, IN and Ithaca, NY.

Your enemy/challenge is the College application process. Prepare well to do battle.