Six MIT students and one Academy-award winning director have dinner in New York, and none of their lives are ever the same again..

There is probably a meter somewhere that measures how much fun you are having at school. Or maybe it’s a bucket, swinging by the handle with each addition of enjoyment. This bucket probably exists somewhere under the tunnels of MIT, and when it fills up past its capacity it tips over and you get showered with psets and tests and remember why you were there in the first place. My bucket sort of exploded last Saturday – and thus the five exams and psets followed quickly after – but it was totally, totally worth it.

A little background, with a lot of parentheses: I just got picked to be a FAP (Freshman Arts Program) counselor, which is an FPOP (Freshman Pre-Orientation Program) that takes place the week before orientation (the week before classes start for freshmen). FAP involves spending a little time in your discipline (either music, creative writing, visual arts, photography, dance, theater, or film – my discipline, which you should all sign up for) and the rest of the time participating in random arts activities (like building a city out of trash, or seeing an improv show in Boston, or having a talent show/karaoke/dance party). Not only is FAP one week of pure awesome (I mean, come on, you get to hang out with The Angela Monster), but you also just might get the chance to participate in crazy incredible opportunities like this one.

Three weeks ago the Office of the Arts invited a handful of MIT undergrads (all FAPers, though not necessarily from film) to participate in the Michel Gondry exhibit at the Deitch Gallery in New York, inspired by his new movie, Be Kind Rewind. The movie features two guys left in charge of a video store (Mos Def and Jack Black), one of whom is accidentally magnetized and causes all the tapes to be erased. Left to their own devices, the pair is forced to recreate all the movies in the store, or “swede” them. “Sweding”, a term coined in the film, implies that the movie is made under a strict time restraint and creative use of limited resources, i.e. switching the camera to “night vision” for a evening shot, with the characters wearing photocopied masks of their faces so as not to invert their skin tones.

Gondry is most famous for this type of organic innovation, as seen in his 2004 Academy Award-winning film “Eternal Sunshine of the Spotless Mind”. He is also known for his visually stunning music videos such as The White Stripes’ “Fell in Love With a Girl”, Foo Fighters’ “Everlong”, and Radiohead’s “Knives Out”, as well as several videos for Björk. He served as an artist-in-residence at MIT in 2005 and 2006, and also just recently came to visit us at the begining of February to screen Be Kind Rewind. “[At MIT,] you can try something, and even if it don’t work, you can try something else,” he said, during an interview after the screening. “And I really like that.” 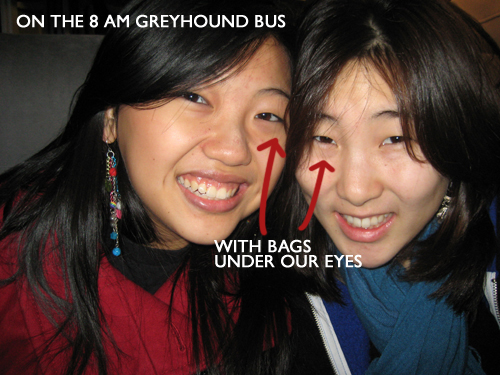 After breakfast at McDonald’s and a four-hour nap, we got off the bus and, lead by the director of the artist-in-residence program Michele Oshima, headed off into New York to grab food. Thus began probably one of the most well-fed days of my collegiate life. Lunch was at an organic French bakery/restaurant and MIT Office of the Arts picked up the tab, so when they asked us if we wanted dessert the answer was DEFINITELY a yes. (Except for Ken, who got another quiche.) 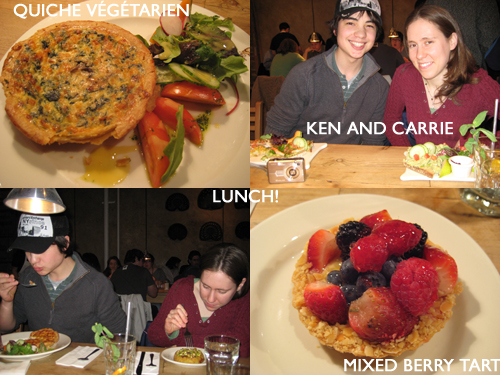 After eating, we visited a small gallery featuring the short films of an Australian artist, Tracey Moffatt – “Artist”, “Lip”, and “Doomed” – all of which were compilations of movie clips, edited to create an ironic social commentary. “Doomed” resonated with me in particular, as it showed several clips of large-scale disasters in succession such that that we were essentially desensitized to it upon leaving the gallery.

And finally, we made it to the Deitch Gallery! 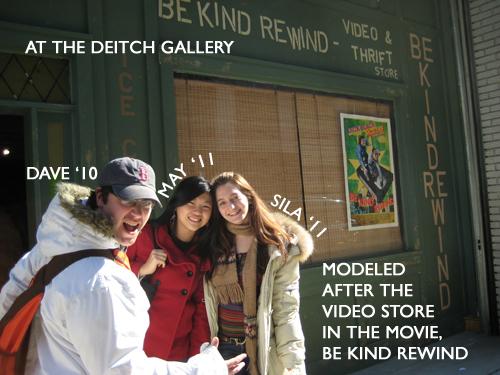 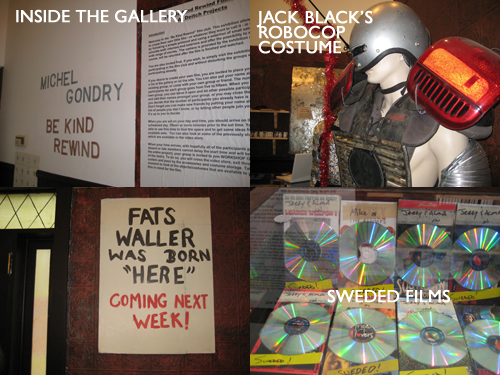 We were told that we would have two and a half hours to make the movie – 45 minutes each in Workshops 1 and 2, where we would plan it out, and 1 hour to film. We were then directed to Workshop 1, where we were given a variety of instructions, including picking a genre, a title, writing out a 8-10 sentence storyline, and considering the different sets we had available to use. I became the cameraperson, which means that’s my ugly handwriting on the whiteboard. 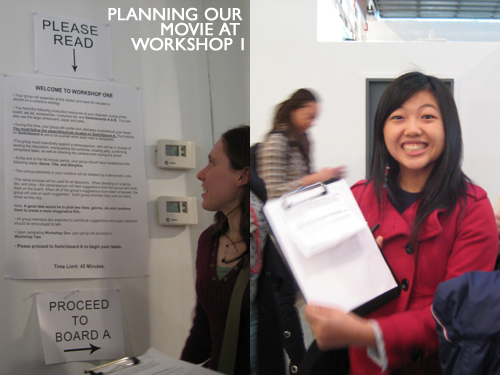 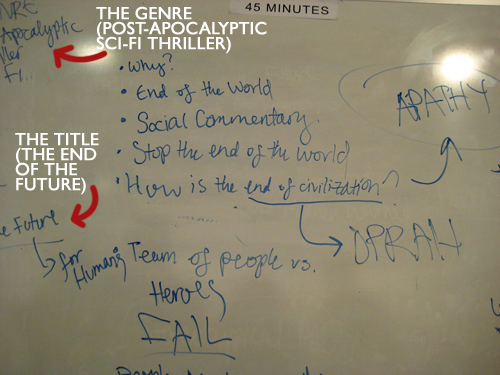 Workshop 1 was conveniently located above the rest of the gallery, so that we could look over the balcony and see the various sets available: 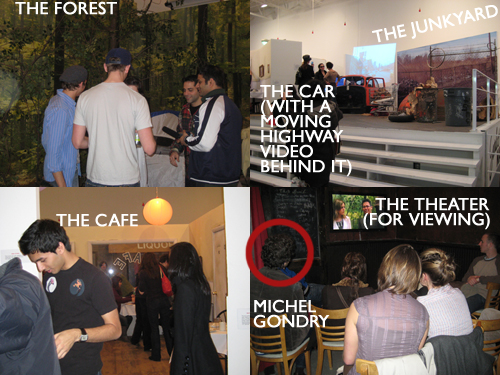 After Workshop 1, we made props and storyboarded the movie at Workshop 2, which we later discovered we did mostly wrong. But we continued on to make our movie anyway! Filming was pretty crazy and stressful, but we were pretty much used to that from school, so I really enjoyed directing. The movie starred Sila ’11, Dave ’10, and May ’11, the last three emotional people in a world of apathy, who decide to use their talents to cure everyone of their indifference and are eventually get sucked in themselves. (Hence the giant “FAIL” on the whiteboard.)

Oh, and then Michel Gondry came and watched our movie.

We were all kind of embarrassed about showing it in front of people in the first place, but showing it in front of Michel Gondry felt a little like throwing together everything you have in your refrigerator at the end of term (for me, hummus, saltines, and orange juice) and serving it to Martha Stewart. It was certainly not the best job we could’ve done, especially filming in just one hour with no editing, but that’s not to say it wasn’t a ridiculously fun experience. Running around and trying to find the next set to film in was something I’ll never forget.

And I’ll definitely never forget Michel Gondry coming to dinner with us. 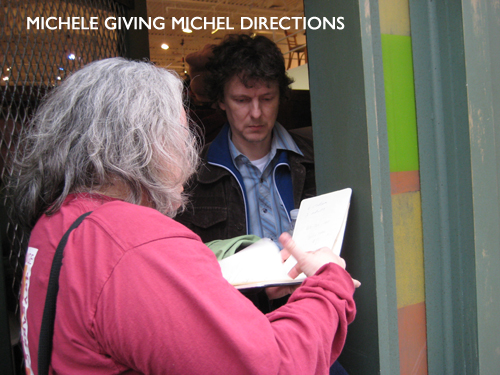 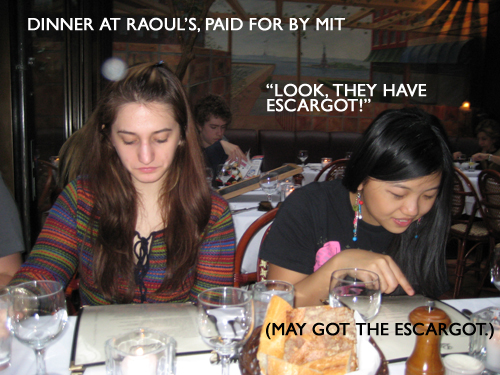 Over dinner we talked about a variety of different topics ranging from our movie (“It was.. okay!”) to the importance of proper storyboarding (“This (our storyboard) is not the best one I’ve seen..”), from Eliot Spitzer (“I don’t see what the big deal is”) to prostitutes (“They are so mean!”). Mostly, though, he told us about his new movie, about a girl who comes to MIT to discover a world of possibility in various experiments being run underground. Hearing him talk about the film, as well as ask us pointed questions about the feeling of arriving at MIT for the first time, was incredibly uplifting, as a lot of movies try to portray MIT pretty unrealistically. The script is still in its early stages; even so, I’m so excited for its release.

As a whole, we left New York feeling inspired, and May left with a kiss on the cheek from Michel Gondry. Except she didn’t know it was coming, so she moved away right as he was about to kiss her goodbye, and left Michel Gondry hanging awkwardly. “Uhh.. I was trying to kiss you, but I will just shake everybody’s hand instead.” And everyone was disappointed. Thanks a lot, May.

Though I think Dave summed it up best when we got back to South Station:

Dave: Can you believe we were here just this morning?
Sila: Look, even the McDonalds menu is different now!
Dave: (wistfully) So much has changed…

(Thanks to Michele for making this entire incredible experience possible!) 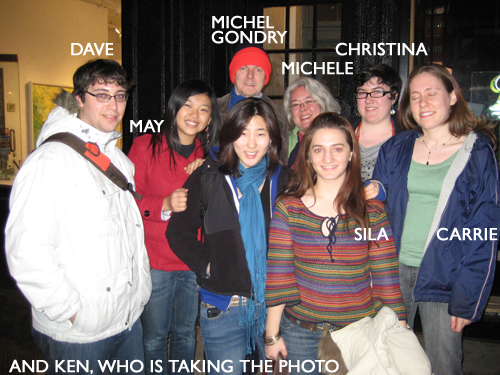