On instability, IHTFP, and leaving sometimes

This next week and a half promises to be electrifying. We’re on the brink of an epic hurricane, a Presidential election, and either the most disappointing or the spookiest Halloween ever. But right now I’m going to talk about me, about MIT, and about why I haven’t talked to you in a month.

Toward the end of September I became noticeably stressed out. I stopped talking to people, I stopped cleaning my room, and I got very lonely. It culminated in an hour-long cry session after a benign meeting with my biology professor about a class presentation.

“Cory,” I said to my boyfriend, “nobody loves me.”

“Have I always been this crazy?” I asked Cory.

I have a fantastic dean at S^3. Last year, I also came in feeling overwhelmed. We spent the half hour appointment talking about personal genomics and when I left I felt perfectly fine. This time, it took about three minutes for him to identify a medication I’ve been on that sometimes causes emotional instability. Two days later I had a procedure at MIT Medical to replace the medication. It was the most physically painful experience I’ve had. It stretched to four hours and left me nonfunctional for the next three days, and then it was over.

The next week was my primary hell week of the term. It was doubled by the work I had to make up from the previous week and I did not do much other than study. There were lots of naps and not enough sleep, and there was a lot of frozen food. I stopped talking to people again. I stopped cleaning my room. I missed my dorm’s annual apple picking event. I got very lonely and I started to wonder if I’ll ever retain enough information about the world to contribute to our understanding of it.

After my final all-nighter I woke up to someone waddling down the alley below my window and swearing angrily. I went to lab, had a conversation with my supervisor about grad school and grades and my future in the lab, and stumbled home crying in the theatrically-placed light rain. When I got home, I broke. I turned into a spiky blob of yelling and crying, completely freaked out my poor boyfriend, drank some cold water, and fell asleep. 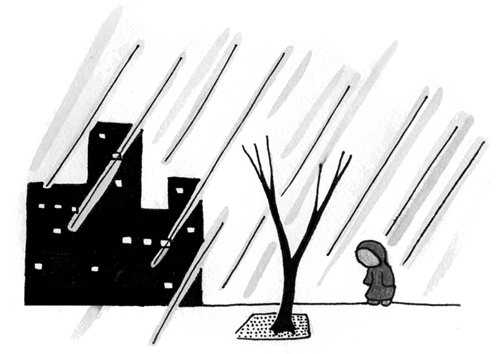 Friday evening I went to visit my high school friend Eric at Tufts.

My dad tells me that when he and my mom were at PhysTech, the Russian counterpart to MIT, he went out to Moscow on weekends just to see other faces. There’s something about seeing the same people every day, and all of us with similar problems, and seeing your particular misery reflected back at you everywhere you look. Visiting Tufts was like inhaling after holding my breath.

The people I met were beautiful. They were relaxed, they were happy, and they didn’t have bags under their eyes. There was a spark, an extra degree of freedom, a young, harmonious vitality. The people around me were spending Friday experimental baking or jazz dancing until the AM hours. I didn’t see anyone studying. They were just having fun, and they were doing it guilt-free and not under the guise of putting off homework. There was something exciting and completely unpredictable about the situation: we might bake! we might dance! we might run out into the cold without our coats! It felt good to talk with someone completely new, and it felt good to be the nerdy one again.

We walked through vast lawns, past trees and scattered red brick houses with white columns. The buildings looked warm and inviting and none of them looked weird. For once, I didn’t want weird. The cold wind bit through my sweater, and the sting felt tangible in a way I hadn’t felt in a while.

“Why don’t you transfer out?” Eric asked.

We stopped on top of the library to look at the Boston skyline in the distance. The roof was lined with trees and a path of white arches, which looked like they should have grape vines or roses. It was quiet, except for the occasional airplane. I wondered if I could pick out the Green Building in the distance.

“And what are my priorities?” 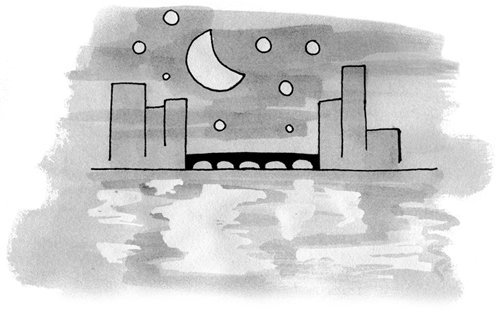 When I got home that night, Cory and I sat down on his bed and talked about how miserable we both were. Something needed to change. Anything. We decided to break up. Half an hour later he came up to my room to collect his Lord of the Rings Legos.

“You forgot your spider,” I said, gesturing toward Shelob, who was hanging by his string from my bedframe.

He unhooked the spider and folded its legs in, one my one, slowly.

“I’m making it more compact,” he said. He wound the string up.

“The extra pieces are in the top shelf on my desk,” I said. I sat down at my desk, pulled the shelf out, and handed it to him. I picked his sweatpants up from on top of my dresser and handed those to him too.

He wrapped his Legos in his pants, folded them carefully, and got up by my chair. He looked around the room slowly, avoiding my eyes, and stepped closer to the door. We stared at each other without making eye contact for a few minutes.

“I don’t think I want to do this,” he finally said.

“Me neither,” I responded.

(Cory agreed to let me post this on the condition that the money I get for this blog post goes toward Legos. “This building is 16+. Are you sure we can handle it?” “Yes. We’re only emotionally immature. Luckily we don’t build Legos with our feelings.”)

The next morning I went to Artist and Craftsman in Central Square and bought a new pencil sharpener, masking fluid, three erasers, mixed media paper, and three small brushes. I stopped by Shaw’s and bought apples, sharpened all my colored pencils, and spent the rest of the day coloring.

There was no swooping deus ex machina: not the operation, not Tufts, not the pencils, not the apples, not Legos, not boyfriends or the lack thereof. I hit the average on my exams, my supervisor ingenuously dreamt up my original life plan and presented it to me last week, and I’m still behind on work.

I’m trying to take it day by day, problem by problem, line by line. I’m calling my family more often, watching TV every now and then, and trying not to say no to opportunities to go outside. I’m trying to get nine hours of sleep a night, even if there’s work to do.

I don’t think many people understand what we mean when we say that MIT is hard. It’s not just the workload.

There’s something to giving everything and always falling short. Eventually we’ll walk out with a deep understanding of our fields, a fantastic tolerance for failure and late nights, and raised expectations for ourselves and for humankind. Someday, we’ll look back on these four years as the best years of our lives and the foundations of the kinds of friendships that can only be formed with some suffering. But right now, IHTFP. Sometimes it feels like MIT drags your self-esteem over a jagged, gravely rockface and stretches your happiness, your mental health, and the passion and energy that brought you here like an old rubber band.

I love this place. I love the amazing people I’ve met, I love watching myself grow as a scientist and a writer, and I love being engulfed in the heart of scientific progress and passion and feeling like I belong. At the same time I’m miserable, sometimes. IHTFP is the middle of the semester, when the lounges off the Infinite Corridor fill up with sleeping people, when I don’t leave the dorm except to go to class or to lab, when I can’t go apple picking because I’m hosed, and when the faces around me reflect my own anxiety. IHTFP is studying my butt off to hit the average, crying about my grades, and then helping a freshman with his homework and realizing how much better I’ve become at patiently disentangling a challenge.

MIT is paradise. I cry sometimes. I love it here. My only consolation is that the salt in my tears will squelch any unsuspecting plants they land on. It’s beautiful. That’s right, unsuspecting Killian Court grass, wither. I wouldn’t want to be anywhere else. 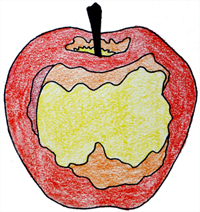