snippets of history from the first 10 yearbooks

One of my UROPs this summer was exploring the history of immigrants and international students at MIT. The Institute has a long history of committment to diversity. In fact, as early as 1917, the Boston Daily Globe reported that “few, if any institutions, in the United States have a higher percentage of foreign students than Tech.” At the time, one out of every 15 students was international. MIT has since worked to increase this number, reaching out to nations all over the world. By 2015, 9.77% of the undergraduates at MIT were international.

My summer research, however, did not start in the 20th century. It started in 1885, when the first MIT yearbook, Technique, was published. Through the yearbooks, I tracked the lives and activities of the earliest international students. And, for the Admissions Blogs, I collected screenshots of MIT student history and culture from 1885 to 1895. Technology (as it was often called at the time), didn’t have a cohesive campus until 1916, much to the lamentation of some students, who believed the Tech didn’t really have a culture. But looking through the jokes, poems, and other notes, I disagreed. Many of the sentiments expressed in the first ten Techniques (all available online) remain true today. The freshman class of ’89 pranked Harvard. Courses II and VI were the most popular. All-nighters were common. The faculty were beloved and often quoted in the yearbooks. And, unfortunately, Thermodynamics was as feared then as it is today. There was a poem perfectly describing IHTFP (below), as well as a poem with hopes for 2000 A.D. (also, below, still relevant in 2016 A.D.).

Here are some of the collected screenshots, highligthing the hopes, differences, and amazing similarities of the Technology students of 1885-1895 and the MIT students of today. 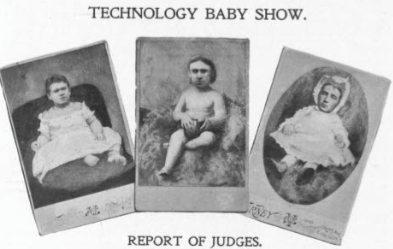 By 1895, 38 States, 1 Territory, the Distric of Columbia, and 17 Foreign Countries were represented.

Tech students had only 13 major options. Course XI. had been founded in 1889, Course XII. in 1890, and Course XIII. in 1893 (though in 1892 some students tried to convince everyone reading Technique that Course XIII. would be Gastronomical Engineering, a Course dedicated to making and consuming food). 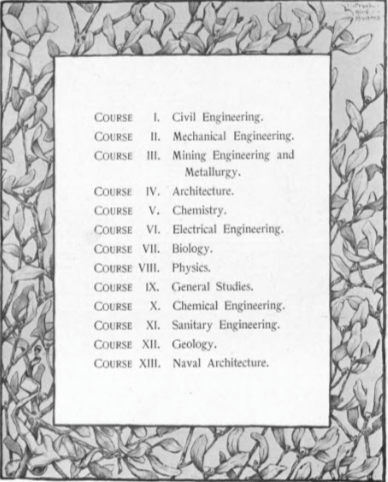 However, even with the limited number of options (compared to the 24 courses now), choices were hard. Here are some words of encouragement for all the undecided:

Some of the majors were quite different from today. For example, Course VIII. Physics wasn’t so popular. (note: Co-Eds = female students at Technology)

Course IX. was definitely not Brain and Cognitive Sciences.

Course XI. Sanitary Engineering (now Urban Studies and Planning) included the following statement: “Let it be distinctly understood that we are not learning to be plumbers; consequently all offers of work which our fellow-students have kindly promised us upon our graduation, are refused. As a Course, we cry out against that insulting term which has been applied to us. ‘The Sewer Department,’ forsooth! Every day, and from all over the world, we receive offers of lucrative positions; but we refuse them all, for we wish to show the Faculty that a graduate from Course XI. is not an impossibility.”  The Sanitary Engineers instead preferred the slogan “Yours for health.”—Course XI.
The “formation” of Course XII. Geology (now Earth, Atmospheric, and Planetary Sciences) was described in the yearbooks in the following way: 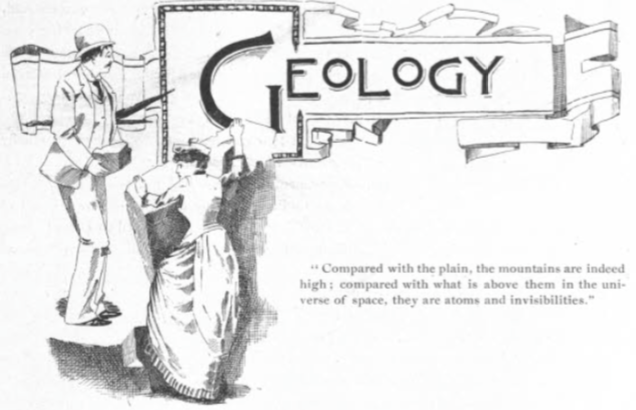 “This Course is the youngest of the family which has been brought into being by the aggregation of sages which controls our existence at Tech. For this reason they regard it with more or less favor, as is shown by the fact that each one of the Junior members is allowed an instructor in Surveying, while the Civils have to idvide one instructor among twenty students.

You have never heard of the Geological Course? Then it will be necessary for us to describe its formation.

It is a sort of conglomerate containing large and hard pebbles of chemistry, biology, surveying, and paleontology, together with smaller ones of German and zoölogy, scattered rather thickly through a bed of tough geology, giving a hard and apparently durable Course, for as yet no signs of weathering have been discovered.”

But what did Technology students do outside of learning?
In the late 1800s, they still believed MIT would be famous for its Athletics.

There was also the wonderful Beard Club (a precursor to the hair-dyeing of today?). Incidentally, the student with the Ultra Violet beard, J. C. Blumé, was an international student from Lima, Peru. Also, note that all the images from the yearbooks were hand-drawn and submitted by the students themselves. 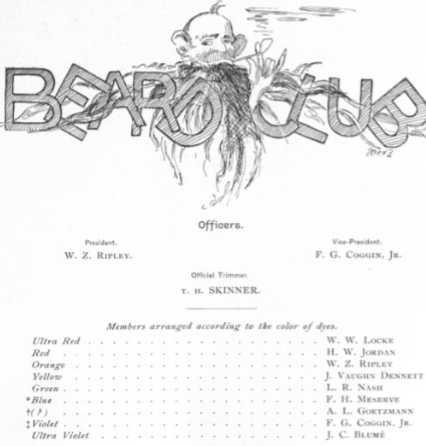 “Extract from the Constitution [of the Beard Club]:

Article II.— Object: The object of this Club shall be to promote, by all legitimate means, the growth of natural hair upon the face.

Unfortunately, not everyone could make it into Beard Club:

Technology students also held annual Class Dinners, with their growth captured in the images below: 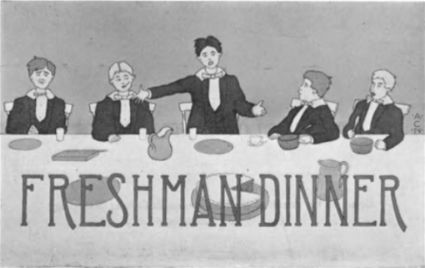 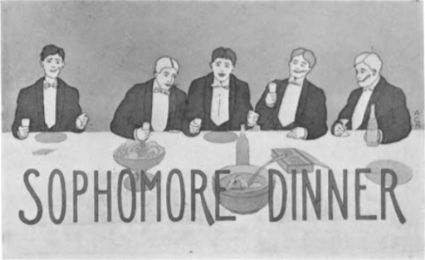 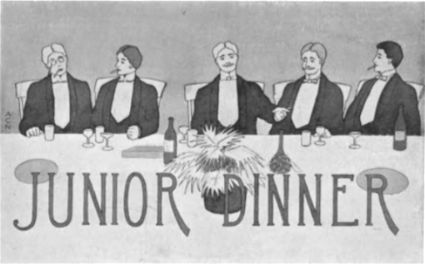 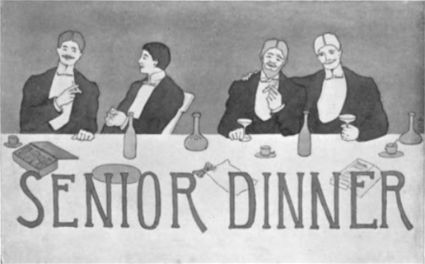 But actually, the students (at least in the class of 1893) looked like this: 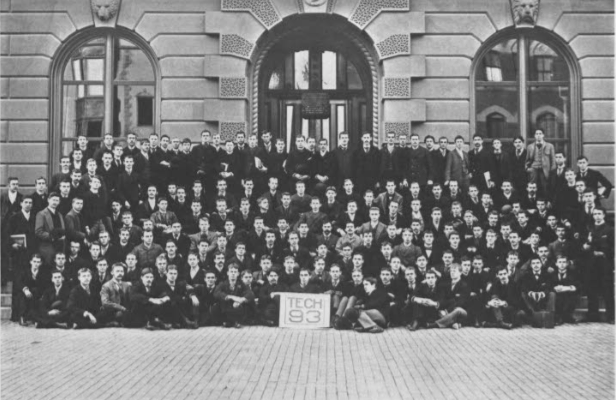 Finally, some cultural notes, or, as they called them in the yearbooks, Grinds: 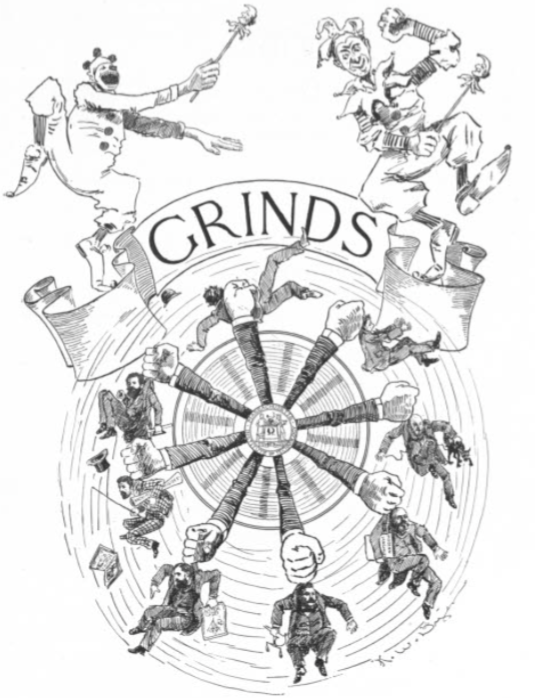 Textbooks were expensive, and so was tuition.

Faculty and math were beloved.

IHTFP was perfectly explained in this beautiful “Retrospection”: 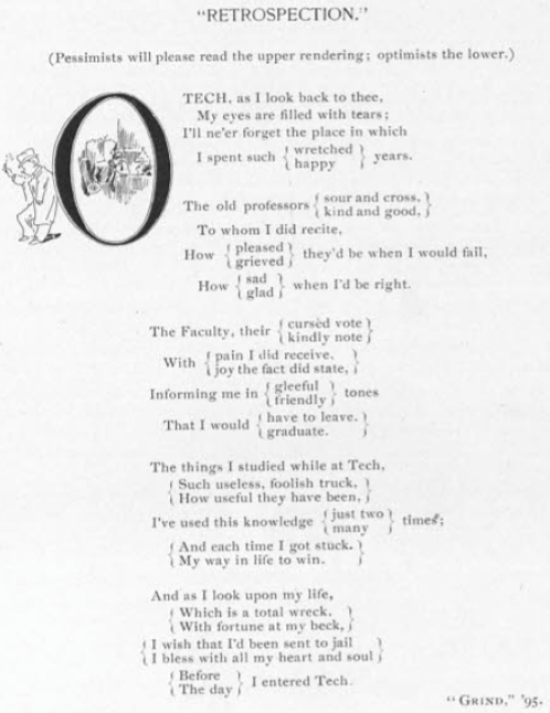 And the students’ predictions and hopes for MIT in 2000 A.D. were expressed in a poem (excerpts relevant to students in 2016 A.D.): 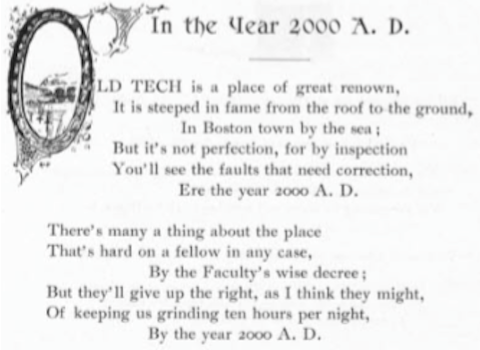 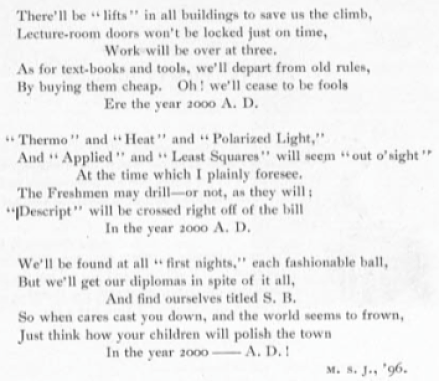 Lastly, here is an 1895 advertisement for MIT from the Secretary, outlining the admissions process. Good luck! 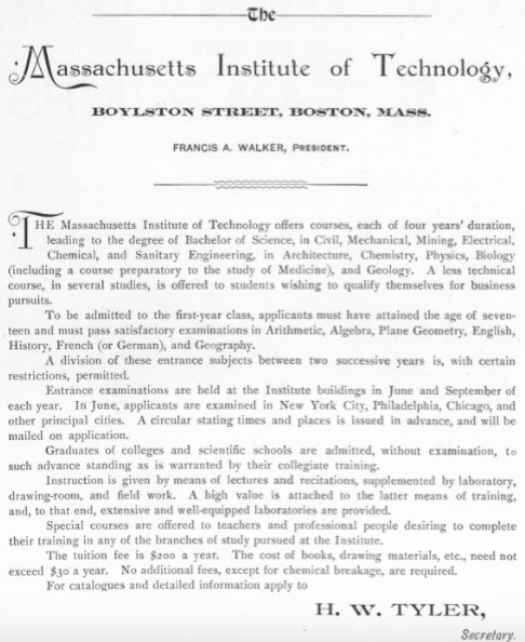