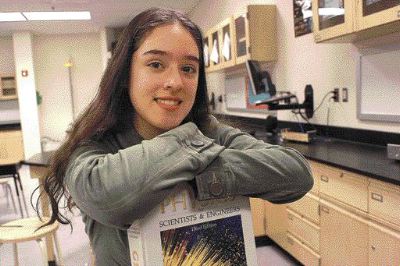 Eletha Flores, 17, of Springdale who is graduating this year from Charles Herbert Flowers High School and the Class of 2006 valedictorian, is the recipient of the Hispanic Heritage Foundation's Gold Medallion 2006 award for engineering and math. Flores will enter the Massachusetts Institute of Technology in the fall.

Eletha Flores' dream always was to attend the Massachusetts Institute of Technology, but she knew her family couldn't afford it.

However, rather than settle for a second choice, the valedictorian at Charles Herbert Flowers High School started applying for scholarships early.

Of the 20 for which she applied, she has received seven acceptances -- as many as she didn't. But the 17-year-old Springdale resident said that's fine because she had a plethora from which to choose, including a full scholarship to Carnegie Mellon University.

"I always wanted to go to MIT. MIT was my dream since I was a freshman. I would make up passwords to my e-mail account like 'MITfreshman,'" she recalled.

Flores was one of three winners and the only one to receive a Gold Medallion from Prince George's County.

As a Gold Medallion winner, Flores receives a $3,000 scholarship and goes on to the national competition, said Clarissa Sandoval, director of programs and media events for the foundation.

The foundation has given out the youth awards since 1998 and has grown the number of categories in which students are recognized from six to nine, she said.

"We are a leadership program, so it's about their potential to be a leader and give back to their community," Sandoval said.

"It's such a high honor for my family," she said.

Of course, she would be thrilled if she got the national recognition, she said.

"It's like an Oscar. That would be amazing if I were chosen for it, but it's OK if I don't get it," Flores said.

Flores, who has a 4.2 grade point average, received numerous awards and recognition for excelling in math, engineering and science.

Flores' interest in science and math was piqued when she learned algebra in eighth grade and decided she wanted to be an engineer because it combined math with science, which she also liked.

At Flowers, Flores discovered she liked robotics and animation, which she hopes to pursue as a career.

Several teachers said they are sure she will be successful and described her as the type of student they see once in their careers.

She motivates students and teachers, said Edem Andy, who taught her advanced placement physics this year and science and technology physics last year.

"I would describe her as very, very focused, very hardworking and always looking at extra work to improve her skills," he said.

Flores and some friends began the Science and Technology Academic Reformers at Flowers last year because they felt not enough emphasis was placed on learning and excelling, she said.

But when it came time to consider to which university she should apply, she was worried about the cost, said Victoria Lee, who taught her engineering foundations II, statistics and structural systems and served as her research practicum mentor.

With Flores' grades, she would have her pick of colleges, Lee told her.

Flores' father, Everardo, is Mexican, and her mother, Leslie, is white. She will be the first engineer in the family, and feels like a trailblazer.

"I wanted to do something different. There's not a lot of females there," she said. "That's one of the things that attracted me to it, the opportunity to make a difference."