"[N]one of the [other colleges'] blogs match the interactivity and creativity of M.I.T.'s, where they are posted prominently on the admissions homepage, along with hundreds of responses from prospective applicants — all unedited."

From The New York Times (check out the awesome photo of Paul, Jess, and Chris M.!): 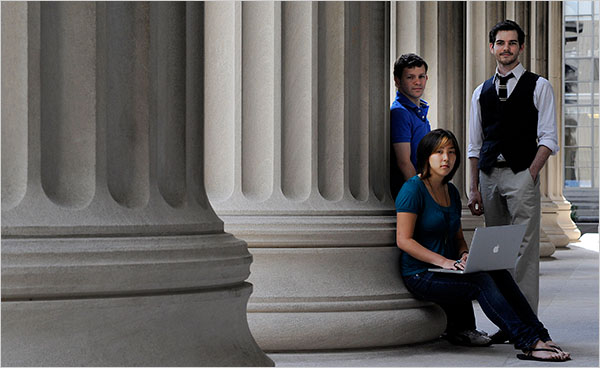 CAMBRIDGE, Mass. — Cristen Chinea, a senior at M.I.T., made a confession in her blog on the college Web site.

“There’ve been several times when I felt like I didn’t really fit in at M.I.T.,” she wrote. “I nearly fell asleep during a Star Wars marathon. It wasn’t a result of sleep deprivation. I was bored out of my mind.”

Still, in other ways, Ms. Chinea feels right at home at the institute — she loves the anime club, and that her hall has its own wiki Web site and an Internet Relay for real-time messaging. As she wrote on her blog, a hallmate once told her that “M.I.T. is the closest you can get to living in the Internet,” and Ms. Chinea reported, “IT IS SO TRUE. Love. It. So. Much.”

Dozens of colleges — including Amherst, Bates, Carleton, Colby, Vassar, Wellesley and Yale — are embracing student blogs on their Web sites, seeing them as a powerful marketing tool for high school students, who these days are less interested in official messages and statistics than in first-hand narratives and direct interaction with current students.

But so far, none of the blogs match the interactivity and creativity of those of the Massachusetts Institute of Technology, where they are posted prominently on the admissions homepage, along with hundreds of responses from prospective applicants — all unedited.

Not every admissions office has been so ready to welcome uncensored student writing.

“A lot of people in admissions have not been eager for bloggers, mostly based on fears that we can’t control what people are saying,” said Jess Lord, dean of admissions at Haverford College, which posted student bloggers’ accounts of their summer activities this year, and plans to add bloggers this spring to help admitted students hear about campus life. “We’re learning, slowly, that this is how the world works, especially for high school students.”

M.I.T.’s bloggers, who are paid $10 an hour for up to four hours a week, offer thoughts on anything that might interest a prospective student. Some offer advice on the application process and the institute’s intense workload; others write about quirkier topics, like warm apple pie topped with bacon and hot caramel sauce, falling down the stairs or trying to set a world record in the game of Mattress Dominos.

Posting untouched student writing — and comments reacting to that writing — does carry some risks. Boring, sloppily written posts do nothing to burnish an institutional image, college admissions officials say, and there is always the possibility of an inflammatory or wildly negative posting.

Pomona has considered having student bloggers, but so far has felt that the risks outweigh the benefits, said Art Rodriguez, senior associate dean of admissions.

“Blogs can certainly help humanize the process,” Mr. Rodriguez said. “The flip side is that a few anxious high school students may think and worry too much about what someone wrote on their blog, and present themselves in a slightly different way than who they really are. And there’s always the concern about the political ramifications, that bloggers may open up an issue or topic that starts something negative.”

But Mr. Lord of Haverford said prospective students’ interest in the summer bloggers calmed his worries.

“High school students read the blogs, and they come in and say ‘I can’t believe Haverford students get to do such interesting things with their summers,’ ” he said. “There’s no better way for students to learn about a college than from other students.”

Many high school seniors avidly follow student blogs at the colleges they are interested in, and post comments. Luka, one of dozens responding to Ms. Chinea, for example, wrote: “I didn’t know about the anime club. I would have never guessed that people at M.I.T. are interested in anime. Oh well … +1 on my ‘Why should I go to M.I.T.’ list.”

M.I.T.’s student bloggers said they had read the blogs when they were applying, posted comments and connected with other applicants.

“I was blogging myself, almost every day, when I was in high school, and I read the M.I.T. blogs all the time,” said Jess Kim, a senior blogger. “For me they painted a picture of what life would be like here, and that was part of why I wanted to come.”

Ben Jones, the former director of communications at M.I.T.’s admissions office, began with a single blog by a student five years ago, at the dawn of the Facebook era, and noticed high school students responding right away. “We saw very quickly that prospective students were engaging with each other and building their own community,” said Mr. Jones, who now works at Oberlin College, where he has added blogs to the Web site.

The M.I.T. student bloggers have different majors, ethnicities, residence halls and, particularly, writing styles. Some post weekly or more; others disappear for months. The bloggers are sought out as celebrities during the annual “Meet the Bloggers” session at Campus Preview Weekend.

M.I.T. chooses its bloggers through a contest, in which applicants submit samples of their writing. “The annual blogger selection is like the admissions office’s own running of the bulls,” said Dave McOwen, Mr. Jones’s successor in the admissions office, in his message inviting applications.

This year, 25 freshmen applied for four new spots, and, Mr. McOwen said, it was hard to choose.

“You want people who can communicate and who are going to be involved in different parts of campus life,” he said. “You want them to be positive, but it’s not mandatory.”

And not all posts are positive. Ms. Kim once wrote about how the resident advising system was making it impossible for her to move out of her housing — expressing enough irritation that the housing office requested that the admissions office take her post down. Officials refused, instead having the housing office post a rebuttal of her accusations; eventually, the system was changed.

But most of the blogs are exuberant, lyrical expressions of the joys of M.I.T. life, like last month’s post on returning as a sophomore:

“Something’s changed,” wrote Chris Mills. “Now you know what you’re in for, you know the sleepless nights and frustrations are never far away, but this knowledge can’t seem to remove the exhilarating smile on your face. And it’s in that masochistic moment that you realize who you are. That this is what you’re made for.”