Concerts (on & off campus), doors (on campus), and lectures (also on campus).

I’m a bit under the weather today, and I’m still working on the next Omnibus, so it’s time for more odds & ends…

The band Hot Hot Heat will play a concert at MIT (for MIT students only, sorry) on Friday night, November 11. I saw Hot Hot Heat on a previous tour swing through Boston, and they put on a darn good show.

Of course, this being Boston, lots of bands come through. Within 2 miles of MIT (and within 5 subway stops), you’ll find the following big concerts here over the next few months: Gwen Stefani & Black Eyed Peas (Halloween!), Nine Inch Nails (November 8), Lenny Kravitz & (Boston’s own) Aerosmith (November 12), U2 (December 4-5; this is their second stop in Boston this tour), Dave Matthews Band (December 15), among others. (Death Cab for Cutie was here last week, Rob Thomas the week before, and Ludacris is in town tonight)

Last entry, I posted some photos from my nascent Dorm Room Doors photo series, and wrote, “If you have some dorm room door photos, send them along!” Well, Jo took me up on my suggestion, writing, “I’ve got a door for you, hailing from Beast (2nd East) of East Campus. The arch inscription has been modified from the original. It reads ‘ennyn erufaile bereth moria: pedo mellon a minno.’ I’ll leave you guys to figure out what that means ; )” 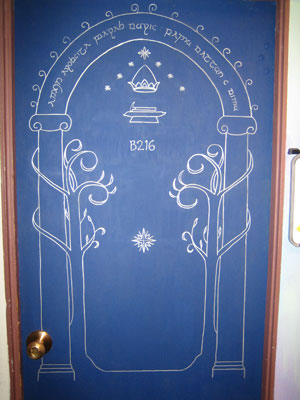 The inscription translation is now an open question to be answered by you, as is the identity of the Cosplay from an entry several months ago. So, answer these two riddles, and send me pictures of interesting MIT Dorm Room Doors.

Also, earlier today as I was walking from my office to the subway, I noticed that there was an abnormally large number of interesting lectures on Thursday, including:

So many lectures, so little time! Which would you go to, if you could go to only one?

Thursday should be an exciting day! For the blogs, too… (stay tuned)