At the end of last year, I transferred from Burton 2 to Burton 1, and while rooming in Burton-Conner is done on in a complex floor-by-floor system based upon class rank and whether you’ve lived in a double or single the previous term, I moved in last and thereby got put into a pretty tiny single. So tiny, in fact, that it’s called a “coffin single”, because you have just enough room to extend your arms all the way. Coffin singles are not for the claustrophobic, the faint of heart, or in this particular case, people who dislike the color purple because the girl before me happened to paint it a hearty violet shade.

Still, I like to decorate, so I did spruce it up a bit: 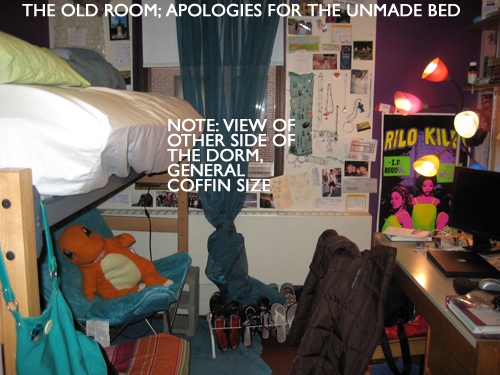 This picture really doesn’t adequately represent how small this room is. It’s smaller than my AP Chem teacher. She was like 4’3″. Basically, it was a pretty big step down from my double during freshman fall, but most people move out of doubles freshman year into singles if they choose to stay in the dorms (about 50% of MIT guys pledge fraternities, and a large percentage of them move into those houses). Still, mine wasn’t especially ideal, since it had a view of the other side of the dorm. The design is a pretty big downside to Burton-Conner – most of its residents can see most of its residents, and while that works out great for Marty’s dad in Back to the Future, my main purpose behind living in Burton-Conner is not checking out the ladies.

Fortunately, the senior who lives in the room around the corner from me moved out at the end of IAP, and the floor held re-rooming for her room specifically. And this entry would be really anticlimactic if I hadn’t gotten her room, so luckily, I did. You can all send Kaitlin thank you letters for saving the plot from certain death. (Although we could’ve buried it in my coffin single.)

First step to moving in: the room required a paint job. Getting to paint your room and walls is a pretty big upside to Burton-Conner (as well as in Senior Haus, East Campus, Bexley, and I believe Random?..), so although I’d moved twice before (from Next to Burton 2 to Burton 1) I was REALLY excited to get this new room. The coffin never really quite felt like mine, since I didn’t get to pick it or paint it, so I got to remedy that with the help of my dad (my parents were visiting that weekend) and Gillian ’10: 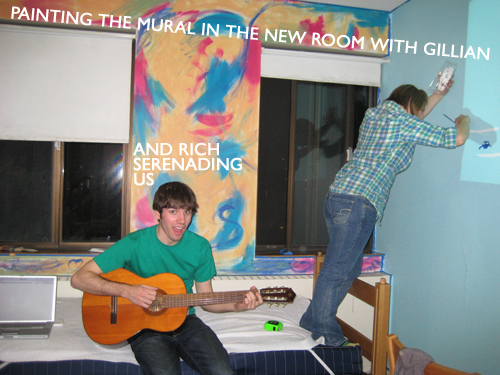 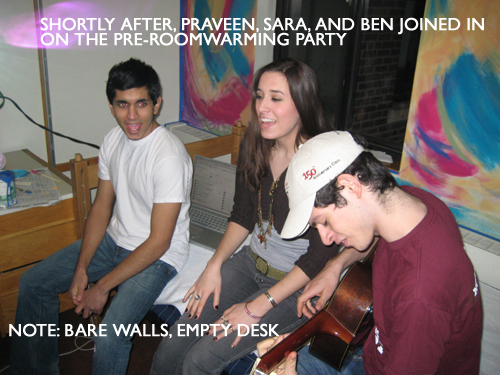 The pre-roomwarming party went through several stages: from just Gillian and I loudly singing Ingrid Michaelson, to Rich ’10 and Praveen ’10 serenading us, to a personal Ben ’11 concert (one of the most musically talented people I’ve ever met, Ben can play pretty much any instrument and pretty much any song, after listening to a few measures i.e. Hot in Herre on the acoustic guitar), to a tea party, to a cleaning party. People will be talking about the pre-roomwarming party of ’08 for YEARS, I swear.

A note on that back wall: Gillian and I couldn’t decide on a color for it, since I had a great teal color that went well with the light blue of the wall to the right (which I later used on that very wall, for the mural), but Gillian was a big fan of the light orange. So we both painted swatches and decided the swatches themselves looked cooler than just a solid color. The wall became a subject of great controversy between Gillian and my mom later that night.

They both, however, liked the mural: 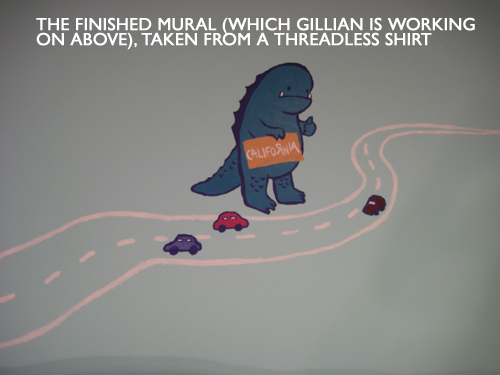 That particular image (printed on a sweatshirt I bought last term) was the result of an internal struggle between that dinosaur and this dinosaur. I was initially leaning towards the latter because of my great affinity for sandwiches, but I went with the former because it seemed like it’d be a little easier to sleep under.

Ready to see the final room? I don’t think you’re ready for this jelly. 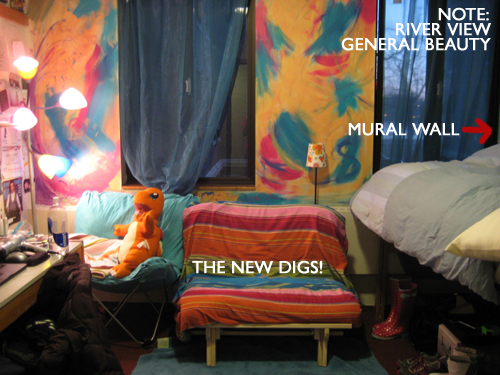 I HAVE A FLOOR NOW. I can flail my arms wildly about in circles FOR NO REASON! Man, it’s great. I know the photos don’t really represent it well, but you can sort of tell this room is a lot more spacious – in the first photo, my bed is lofted and the futon/chair are underneath, and the desk is basically a foot away from that entire structure (nicknamed the “PLANETARIUM FORT”.. the reason behind that is kind of a long story, but basically it implies I have a really small room). But here I have enough room to just put my shoes under my bed, and leave the futon and chair against the back wall.. so the “PLANETARIUM FORT” name no longer really applies.

Which is where you come in. What should I name the new room? Examples of other rooms on Burton 1 include “TREEHOUSE” (for the tree mural painted in the corner), “UNITED NATIONS” (for its diverse residents) and “LOVECAVE” (for obvious reasons). Right now I’m thinking “JURASSIC PARK”, but I’m definitely open to suggestions.

So those are the new digs. Coming soon: Burton 1 Cribs, an inside look at the other super sweet rooms on my floor! (Also an entry about the classes I’m taking this term – I’m cross-registering two at Harvard – and Ring Premiere, which on Monday. I’m personally more excited than Evan.) Speaking of my floor, the boys surprised all the girls yesterday with valentines on their doors: 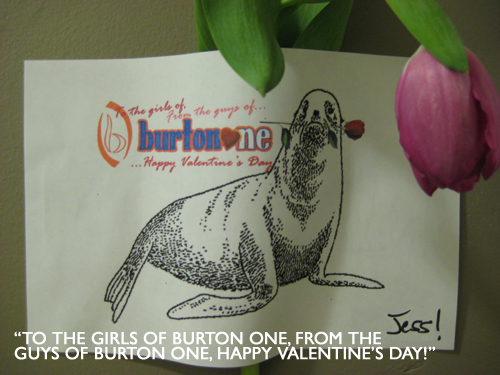 45 responses to “Moving Out”