I’m finally recovered from the Mystery Hunt… here’s the “official synopsis” of how the Hunt went down:

The hunt began with teams gathered in Lobby 7. The Evil Midnight Bombers What Bomb at Midnight announced the hunt would contain 270–no, 271–no 271 1/2 puzzles, all in keeping with the first unpardonable activity of gathering the assembled puzzlers into a massive sudoku grid. The motivational speaker Michael Fauntleroy came in to save the day, offering the teams the opportunity to get the coin and win the hunt in a mere 25–no, 15–no, 5 puzzles, if they’d only sign a simple contract with some unreadable fine print.

After nearly all teams found the coin within a few hours of starting the hunt, they realized that by signing the contract, they had sold their collective souls to Michael Fauntleroy Stopheles (M.F. Stopheles, for short) for a mere penny. To get their souls back, they would have to complete his course of videos on how to be really really evil in various fields, and all the puzzles therein. This would raise their Evilometers to a level where they could rise in power for a showdown with the devil.

Along the way, they also had to complete a series of unfortunate events that would show how proficient they were in each of the seven deadly sins. These helped unlock their seven Sin Meters, which each were linked to certain thematic puzzles. Filling their Evilometers to a certain level unlocked a Hell Runaround, which led them on a goose chase through the halls of MIT and down into hell. There they received seven Hell Puzzles, all completely unsolvable without an additional instruction page gained by unlocking the appropriate Sin Meters.

Finally, at each stage, the teams received a certificate of their evil achievement. These certificates were used in the final epic battle with the devil, after which the teams regained their souls and triumphed over evil.

I played on team “Lego My Ego,” based out of the Simmons Hall dormitory (you know, the one with 5,538 windows). Simmons looks like it was made from Legos and is referred to as the Space Waffle, and the Mystery Hunt puzzles are quite humbling, hence “Lego My Ego.”

So, at noon in Lobby 7, our team gathered beneath our team sign. 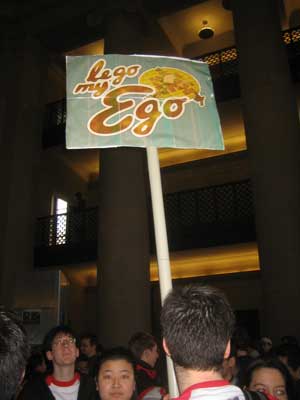 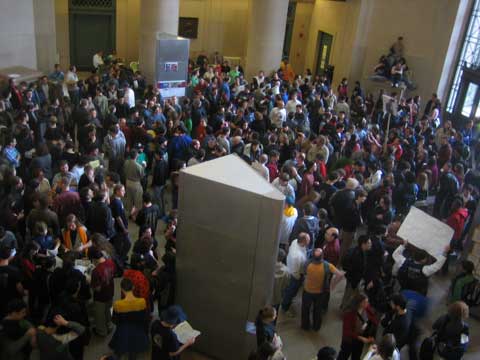 As advertised, after we solved the first five Mystery Hunt puzzles, we determined the location of the coin: the Alumni Pool! 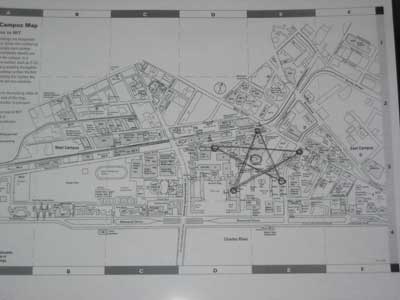 So, we raced over to the Alumni Pool, only to learn that yes, we had sold our souls to the devil. We were now at the “Mephistophelean Institute of Turpitude.” We were given a certificate that read: “Certificate of Really Really Evil Achievement: We hereby laud and recognize Lego My Ego regarding outstanding efforts in the Evil Discipline of selling one’s soul.” 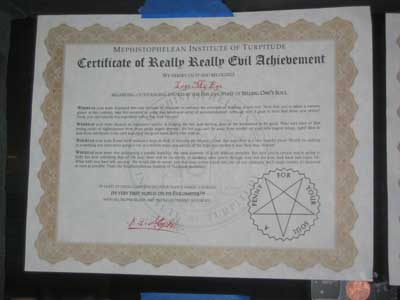 This opened up a whole new series of puzzles, which kept us working all night. One of the really cool things about Mystery Hunt is how, in some senses, it is a microcosm of MIT: students and professors (and alumni and friends) collaborate to solve problems. Here’s some of our teammates collaborating on a puzzle: 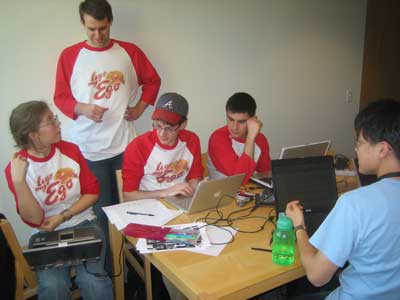 One of the classic puzzles of any Hunt with Dan Katz ’03 is the Duck Konundrum. This Hunt’s version was D4: Ducks Playing Poker. Here’s the description:

Duck Poker is a rarely practiced poker variant; it is not popular among humans because the outcome is entirely predetermined… however, ducks like it, because they enjoy watching humans helplessly follow directions. 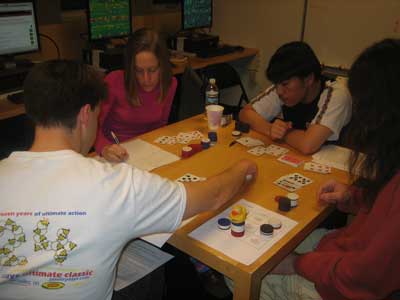 D2: The Mighty Duck Konundrum (during which a wrench was instructed to be thrown at my head)

D3: The Fellowship Of The Duck 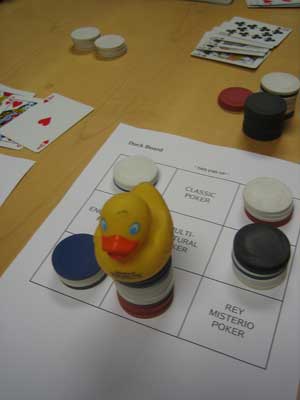 Another puzzle you may enoy looking at is this dance puzzle starring Hunt co-organizer and my former Baker House dormmate Jenn. It’s worth watching the Quicktime video for the puzzle and the amusement: 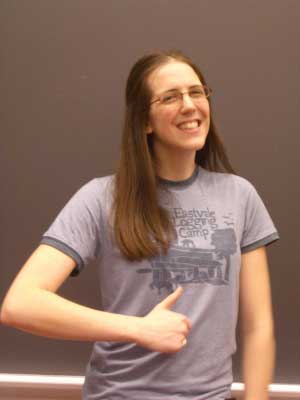 In the end, we solved 70 puzzles (according to the solving graph) and solved more meta puzzles than we ever had before. You can check out all of the puzzles yourself here. Here’s a part of our solved puzzle wall of fame (of course, since it’s Simmons Hall, the wall is curvy): 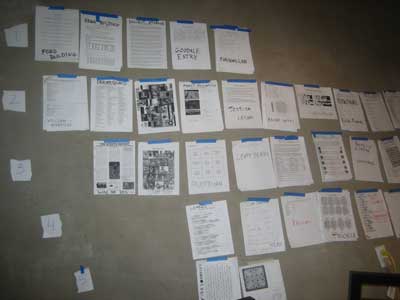 So, what’s the verdict? I’d say that this was certainly on of the best Hunts ever (if not the best). it was a hunt clearly written for the enjoyment of all of the nearly 40 teams participating, and worked equally well, I think for rookie and veteran Hunters alike. I hope that many of you will get a chance to take part in next year’s Hunt. I’m hopeful that the winning team, Palindrome (Dr. Awkward), will write another amazing weekend of puzzling fun!