New ZigZag video podcast & behind the scenes by Matt McGann '00

An inside look at the new video.

A new and different episode of ZigZag, MIT’s video podcast, is up… check it out! 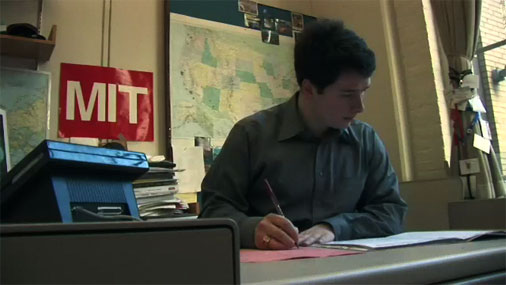 Let us know what you think, either in the comments section below or at the ZigZag comments box.

The idea for this episode actually came up last semester over a lunch meeting at the Forbes Family Cafe in the Stata Center. I was chatting with the folks at Academic Media Production Services (AMPS): the people behind ZigZag. Asking me for ideas for a future episode, I said, what if we did a theme episode, one just looking at the lives of MIT freshmen? I think people are very curious about what it would be like to be a first semester student on campus.

From there, we went about contacting students and setting up a production schedule. I sent out an email to a dozen random (and awesome) freshmen that I know well, to see who might be interested. I found five who would be around for the filming and who were excited to participate.

So, a few weeks back, we sat down to talk with all five students. We chatted with Jenn and Star in a classroom in Building 1, with Minh in her dorm, McCormick Hall, with Waciuma at the Pierce Boathouse, and with Evan at his dorm, Burton-Conner. Of course, this was all squeezed between my reading applications and the busy schedules of the five students.

Following the interviews, AMPS captured the B roll footage you see in the video, including Star at MITERS, Jenn rowing crew, Evan with FIRST Team 97, Minh in class, and Waciuma at the foundry.

David from AMPS produced this episode of ZigZag, working late into the night this week to cut down hours of footage into a six minute video. Alas, there was so much good stuff to show, but a lot of really cool stuff had to be left on the cutting room floor (not literally, of course — it’s all done by computer these days).

Kudos to David and the whole team at AMPS. Hopefully this episode was interesting and entertaining to watch. I know I had a good time helping to put it together.

12 responses to “New ZigZag video podcast & behind the scenes”