Maybe I need to get over myself – it’s been six years since I was in my friend’s room at Random Hall reading that fateful email from Ben Jones informing me that I was selected to be a blogger…BUT every once in awhile I do get that itch to come back and write something. And thus I’ve been satisfying that urge by writing a couple of marginally helpful posts about MIT now and then :P

So, I’m sitting in NYU’s Bobst Library (there’s nothing on my beloved Hayden, but I must say that a library in front of Washington Sq Park and an entire street of yummy treats (aka. St Marks) nearby is really not bad at all), just over a quarter done with my third year of med school, and starting to agonize over which one of these to become —

OKAY, so there IS a point to this entry! Here it is —

Almost six years ago, I wrote this entry – Notes on the Interview, which, based on the stat counters at the bottom, has probably been of help to a few people (1804 emailed? really? :D).

Now, I’m sitting at the other side of the table, having done some 16-odd interviews for MIT these last two years. As I head into this season with requests coming into my inbox, I thought I’d update the blog post from six years ago, with added maturity and wisdom under my belt as an Educational Counselor myself :P

Second of all, since I was such an admissions guru (lolz) when I was still in college, I offer the same 7 pointers from my previous interview, updated with new comments. Here they are:

1. It is not a test.
I’ll tell you how much we ECs know about you as an applicant – where you live, what your birthday is, where you go to school, and what your name is. That’s it! I’m not comparing you against anyone and I don’t know what you got on your SATs. After I write my interview report, I have no bigger bearing on your eventual decision as, say, your mom.

I genuinely am curious about the person that you are, and why in particular you chose to apply to MIT. I spoke ad nauseum when I was still a blogger about your “passion” – the thing that drives you to wake up at 5 AM, the life story or experience that sets you apart from others. The interview is an opportunity for you to convey that, for us to get to know you more off-the-paper. This is not a business school interview – I won’t ask you to solve any problems, and I won’t ask you to solve a logic puzzle. Relax, and come prepared to simply talk about yourself.

2. Be prepared.
In my previous blog post, I offered a few pointers of things to consider prior to your interview. Although I just told you to relax in #1, it does help if you do a bit of pondering before your interview. More than anything, really, it helps us if you can come prepared to talk about what your life is like and what things you are interested/do at school. I try hard as an EC to be a strong advocate for each person I interview, but I can’t help you if you don’t know what to talk about! (either way — I’ll draw it out of you anyways ;) but help me help you! :D) Therefore, I will advise interviewees to casually pick out a few things to talk about at your interview. Don’t lose sleep over this – like I said, this is all casual, but I think if you do even 10-15 minutes of thinking beforehand, the conversation will go smoother (and hopefully will be a lot less nerve-wracking for you!)

3. Be inquisitive.
Secondly, and just as important, I actually do ask my interviewees to come with 2-3 questions about MIT to the interview. I believe that we as ECs are often the most direct conduit connecting you to MIT, and the best resource (aside from these blogs!) to answer questions about what it’s like to be a student at MIT. In the rare occasion that I haven’t been able to answer a question, I’ve looked up the answer and then emailed the interviewee back, so don’t be afraid to ask us questions! Just know, though, the interview is really about you, so expect to do most of the talking ;)

4. Be sincere.
Two years ago, I interviewed an applicant who was (truly) interested in science and engineering, and we were talking as normal about her projects and such. However, the conversation later shifted to the sport that she has avidly played since childhood, and her eyes immediately lit up. She started talking about her sport with a fondness and fervor that I could hardly describe in words here – I happily spent the next twenty minutes or so learning the finer aspects of her sport – the nuances that she has perfected with years of practice and experience.

Trust me – it’s not hard to tell feigned (or even forced!) interest from true passion. Of course we like to hear about your scientific interests, given that you’re applying to MIT and all, but that does not have to be where the heart of the conversation is, by all means! I’d rather hear about your exploits on the lacrosse field or the ceramic lab rather than a forced discussion of “tell me about a time when you worked in a group in your science class.”

5. Be punctual.
Maybe because I mostly do Skype interviews, I haven’t had an issue with this (I assume people are on Facebook anyways before/after talking to me :P). In the times when I’ve done in-person interviews, it also helps me find you in a crowded Starbucks if you are 5 minutes early ;)

6. Be polite.
Again, I haven’t really had an issue with this and my interviewees have been excellent about responding to email, but please let me know if you need to change the time or if you’re going to be more than 10 minutes late. The only thing that I’d add is that I do think it’s a nice gesture if I could hear from you again after the interview and (only if you want, I don’t really mind) after you make the final decision. I draft very detailed interview reports for my interviewees, and sometimes I do wonder where you ended up! :)

7. You can’t fail!
Honestly, other than this one interviewee who told me he applied to MIT “just because,” gave me extremely brief answers despite my numerous attempts of getting to know him better, and appeared truly unconcerned about the interview we were having – you can’t fail*.

* and even I feel you did, the admission office – not me – gets to decide!

I can’t speak for the thousands? of ECs out there, but here’s what I do when someone approaches me for an interview:
-We set up a time to talk, and I ask you to prepare 2-3 questions about MIT for me. Although I’d like to ask you to come with a few things to talk about (see #2), I don’t actually do this because I really don’t want it to seem like a test that you have to prepare for.
-We have the interview, which is a casual conversation about you and why you like MIT for an hour (you’re welcome to wear a suit if you want, but honestly I don’t care in the least – I wore hoodies too to my own college interviews :P but just know this expectation may differ between ECs).
-I answer your questions about MIT, and I provide a general time frame of “what’s next?”
-I offer all of my interviewees the opportunity to use me as a resource for MIT questions throughout the application season.
-We conclude the interview, and I draft a coherent and descriptive report of what we talked about during our time together for the Admissions Office. I try hard to accurately relay what you tell me, and I add in my own comments about you.
-I wait till next summer when I get feedback from the Admission Office about how “helpful” my report was (I’m proud to say I receive more 5s than 4s, and have never gotten a 3 :P)

Not to wax poetic, but I still love the speech Sal Khan (founder of Khan Academy) made at the 2012 Commencement where he said MIT is the closest thing to Hogwarts. You might not notice it as much when you’re chest-deep in psets and drowning in lines of code, but take it from me (and our group of MIT alum friends in New York and San Francisco) that you only come to see this much more clearly after you leave.

And since you’ve read this far, you have to look at this picture of a ramen burger that I (and my girlfriend, who is also a MIT alum) made last week. Best of luck :) 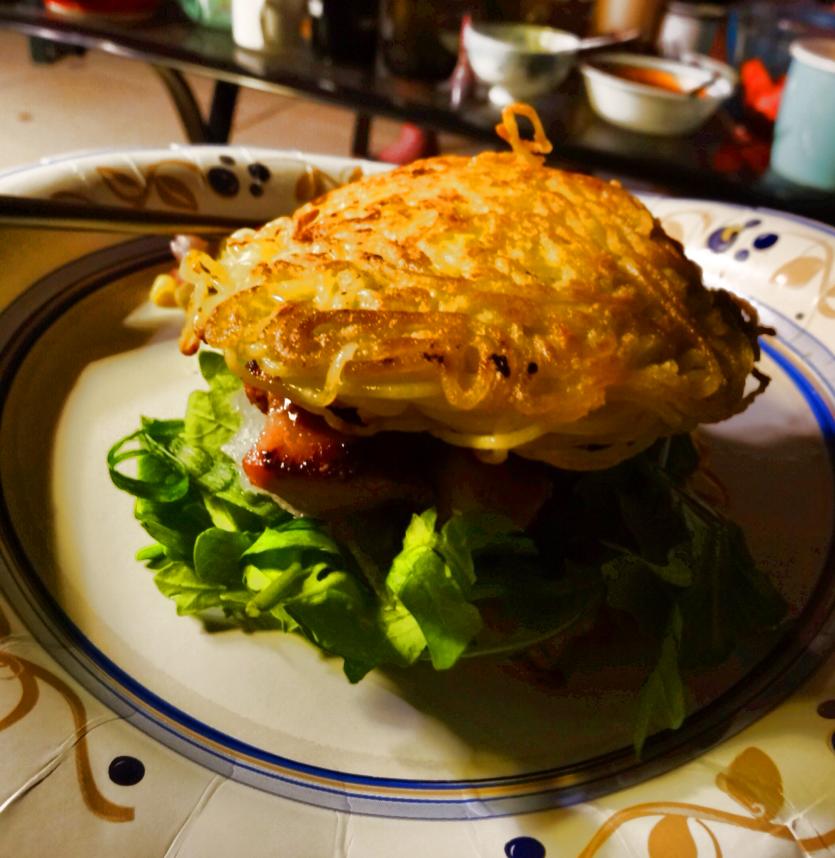