One Giant Leap by Snively '11

I’m up early. I’m up REALLY early, and it’s not because I stayed up, it’s because I woke up . . . to go study. Finals are coming up! You see, there’s this little class called “2.006” also known as “Thermal Fluids Two” and it’s a wee bit difficult. Difficult in that since Friday morning at 7 I’ve been studying pretty much non-stop. The final is on Monday, that gives me 1.5 more days to learn everything. The good part? I think I’m almost there. I actually think I’ll be ready for Monday *crosses fingers*

But, I digress. I walked out of the dorm this morning at 6:20 AM. As I ritually do, I check the dome before I head down dorm row towards campus, just because the dome is so visible and I’m more likely to see a hack in the morning than in the afternoon or evening.

So, step 1, check dome.
Step 2, get really excited and head back inside for my camera.
Step 3, photograph dome from afar to share on blog. 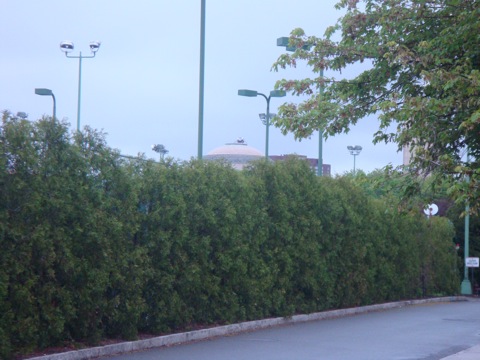 YAY! They put a BUMP on the dome. Obviously, from this distance, whatever was up there wasn’t quite as impressive as I think it was supposed to be, so I detoured from my studying route and headed over to Killian. Now, I don’t have some fancy SLR or tripod or anything, I’ve got a cybershot throw-in-your-pocket camera. BUT – it loves taking pictures outside and the digital zoom is pretty good, so I’ve got two more pictures for you, one from farther away and then the same picture zoomed in really close. I’ve played with the brightness and contrast in order to make things a bit more visible. 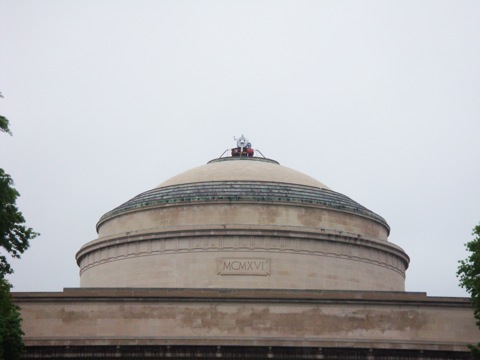 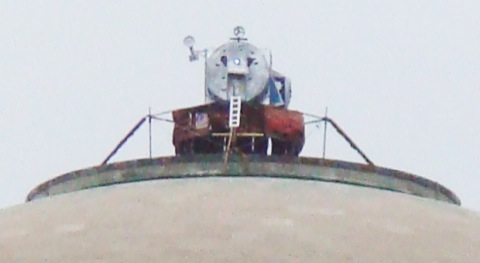 Ahhhhhhh, ok, I get it now. It’s a lunar lander! Apollo 11 probably, since the 40th anniversary is coming up. 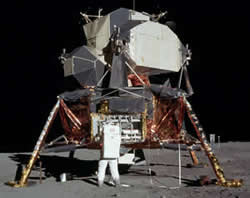 Yeah, that looks similar! From the distance I could see that white circle above the ladder blinking, so there are at least some onboard electronics. I’m guessing they’re not solar powered but it does add a nice touch.

11 responses to “One Giant Leap”