As you may have gathered from these blogs and/or any time you may have spent here, MIT has a lot of completely amazing people. One of these people is my good friend Lauren H. ’16, who (among other things) happens to have the dangerous dual combination of both being full of awesome project ideas and being really, astoundingly good at the whole art thing. She’s got a blog of her own, The Fullerene Incident, where she documents her creations and adventures: personal favorite posts of mine include The 21-Centimeter Pillow and block-printed Feynman diagrams for the four primary Higgs production mechanisms. (I’m a physics nerd; not gonna apologize for that.)

What follows is a blog post Lauren wrote last month about one of her adventures as part of the MIT Flying Club, which is, yes, yet another thing you can do here. Thanks to Lauren for letting me post this. 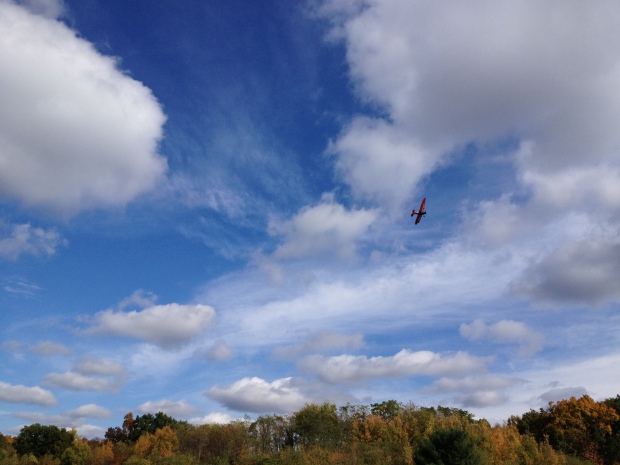 Old Rhinebeck Aerodrome is an air museum in eastern New York that restores and displays Golden Era and WWI aircraft. Instead of just preserving the aircraft, though, they hold weekly airshows to show off the capabilities of the restored dogfighters and barnstormers…and for two weekends in October, they host a Fall Festival, the headline event of which is pumpkin bombing.

Pumpkin bombing. From WWI biplanes. There is no fate more worthy or glorious for an overgrown squash, with the possible exception of pumpkin pie.

Where else could the Flying Club possibly go for the fall fly-out? 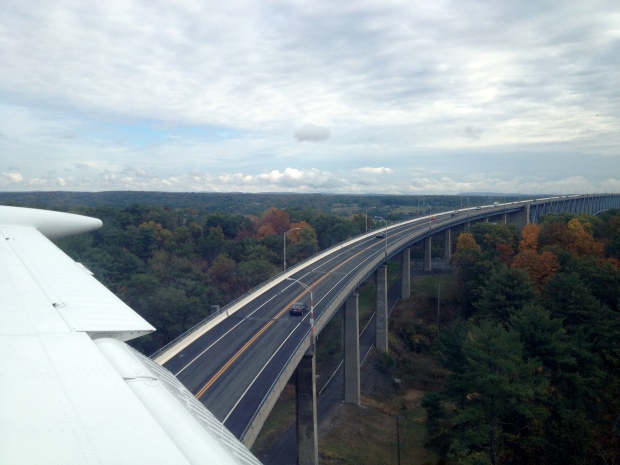 The morning of the fly-out was grey and dreary, but thankfully, by the time we arrived at Kingston-Ulster Airport, we could see patches of blue sky through the clouds. By the time we’d stopped for lunch and driven to the Aerodrome, the sky was wide-open and absolutely beautiful.

The airshow opened with barnstorming stunts: first, we watched a Fleet Finch 16-B and a DeHavilland Tiger Moth throw rolls of toilet paper out of the sides of their planes, then compete to see who could make the most cuts in the paper before it fell to the ground. (The Tiger Moth won, with six cuts.) 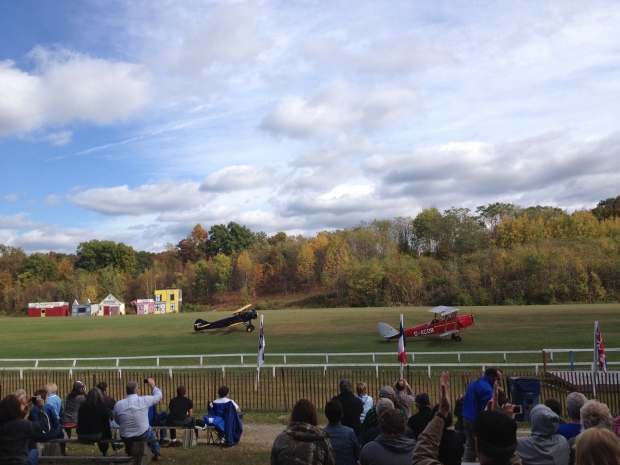 The triumphant Tiger Moth taxiing back ahead of the Fleet Finch.

We then got to see a number of Pioneer-era aircraft, including a Blériot XI, the first heavier-than-air craft to cross the English Channel; a 1910 Hanriot; and a Curtiss Pusher Model D. The Blériot barely made it ten feet off the ground, and it was hard to imagine how it could have made the 20-mile trip across the Channel. (After a bit of Googling, I learned that he made the trip at an altitude of 250 ft above the ocean; I expect he was buoyed partly by very favorable winds and mostly by his moustache.) 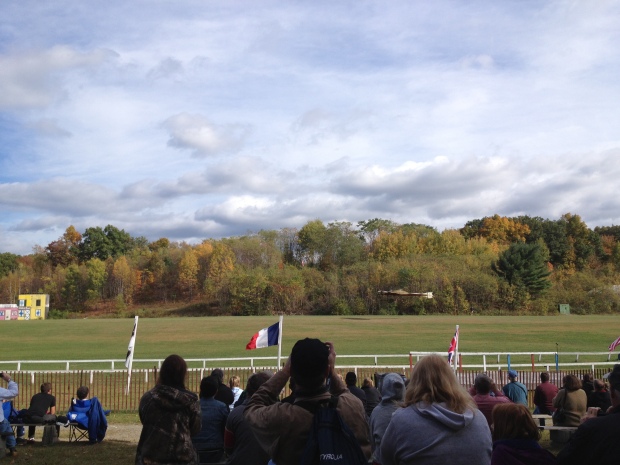 After the display of Pioneer-era aircraft, they brought out a 1917 Sopwith Camel and a 1917 Albatros D.Va for a mock dogfight. Unfortunately the Camel’s engine wouldn’t start, so the Albatros took off alone. It’s no surprise that so many German aces flew Albatros fighters; the Albatros was an absolute dream to watch, and it flew like it was meant to be in the air. 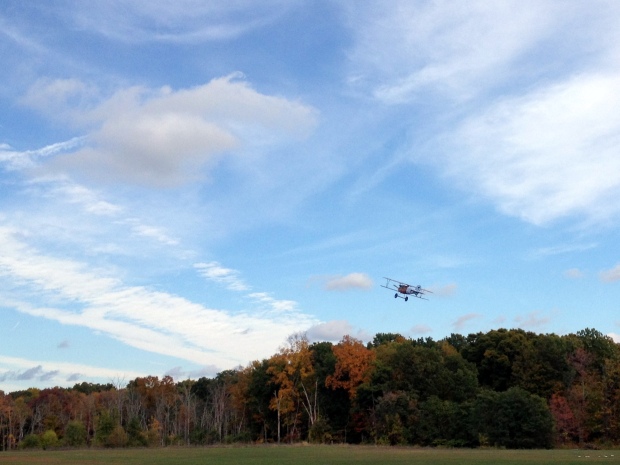 The blue-and-white coloring isn’t meant to be camouflage; it represents the livery colors of the Kingdom of Bavaria.

This was about the point where my phone died, so I didn’t get to take pictures of the two comedic interludes: first, the “Flying Farmer” act, where the Old Rhinebeck groundskeeper started arguing with the announcer about wanting to be flown back home because he can’t work on the grounds during the show. The announcer told him they’d fly him home after the show, and the frustrated farmer steals a Piper Cub to fly himself home. The plane trundled down the airfield and it looked like he would crash into the trees on takeoff, but he made a high-performance takeoff, pulling up just in time and skimming right over the trees. He flew away, then came back to do some aerial stunts (I had no idea you could do loops in a Cub!) and made an incredibly well-controlled bouncy landing.

We were also warned at the beginning of the show that there was an “escaped convict” on the loose at Old Rhinebeck. While a few of the planes were barnstorming overhead, a man in striped clothes drove onto the field in a turn-of-the-century car, with constables in their own car in hot pursuit. The convict’s car broke down, so he jumped out and raced toward the Fleet Finch that had just landed. He grabbed onto the plane and the Finch taxiied out of sight…then suddenly it turned around and took off with the convict flapping along behind the wing! One of the constables fired a rifle at the plane, and the poor convict (who looked suspiciously like a windsock) tumbled down to earth. The constables sped their car over to where he had landed, with the one in the back brandishing a giant butterfly net. As soon as they stopped in front of where the convict had landed, he suddenly recovered from his injuries and sprinted out from behind the car! A chase on foot ensued, but the officers eventually captured him in the giant net and saved the day. 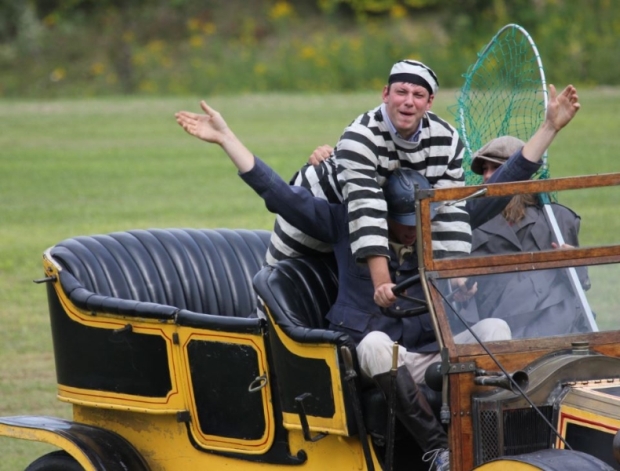 The show closed with pumpkin bombing, where the D-25 biplane took a payload of pumpkins up over the fake town at the back of the field, and tried to hit Der Sausage Factory und Gasworks. Pumpkins, it turns out, are not the best projectiles…but it was still cool seeing the biplane drop the pumpkins well before it flew over the town, and watching the pumpkins follow parabolic arcs as they fell.

After the show, it was time to leave the Golden Era and head back to Boston. We tried a few high-performance maneuvers and practiced some close-formation flying on the way.

I also took far too many pictures of the sunset. I think that’s forgivable, though – the sunset is beautiful from the ground, but from the air it’s downright magical. (I kept thinking of the Diana Wynne Jones book Castle in the Air, and the ever-shifting cloud castle.) 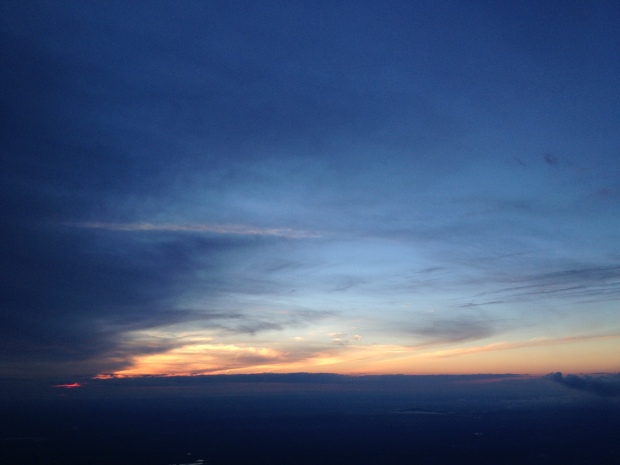 The one plane I wished we could have seen at the show was the iconic Fokker Dr.1 triplane. Old Rhinebeck alternates shows on the weekends, so on Saturday they hold the History of Flight airshow, with mostly pioneer-era aircraft and barnstormers, while Sunday is for the WWI airshow. I suppose there’s no other option but to come back on a Sunday next year to watch the WWI airshow…what a shame.