*insert shimmering transition into the past here*

Hey, there, it’s been a while. Sorry about that; it turns out that blogging momentum is really hard to start up again after a certain point. I’ll be trying to atone throughout April.

In the meanwhile, here’s a story from my freshman year.

It was early December, 2011: the flame wars of [email protected] were still fresh in the minds of undergraduates[1], yolo was only beginning to take off as common slang, and MITx, which is now the foundation of MIT’s online education efforts, was still a couple weeks away from being announced.

December 2011 was also a particularly exciting time in the world of particle physics. A week or so before, I had attended my recitation for 8.012 (freshman physics), and my recitation leader—Professor Eddie Farhi, Director of the Center for Theoretical Physics—found himself some extra time at the end of class. Farhi sat on the desk with his hands in his lap, and began to explain the search for a bizarre particle known as the “Higgs boson.”

The Higgs boson—poorly nicknamed “the God particle” by popular press—is more generally known now in 2015. At that point in 2011, its existence and properties remained a mystery, but not for long. 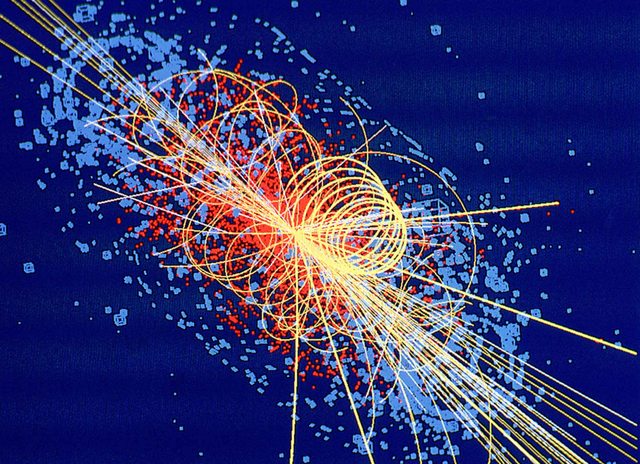 Farhi explained how researchers from around the world, including at MIT, had been churning away at data from the Large Hadron Collider at CERN in Geneva, Switzerland. The LHC is a massive particle accelerator, where tiny bits of matter smash into each other at terrifying speeds and create all sorts of exotic particles. Those new particles don’t like to exist for particularly long: they decay into other particles, which themselves decay, and so on. Detecting the “signature” of one of these exotic particles is a bit like staring at a Jackson Pollock painting and trying to figure out exactly how Jackson flung his paint. Every once in a while, you can pull out something (an “event”) which could have come from some exotic particle. The trick is to find a LOT of those events to accumulate a more solid bed of evidence that said particle was actually created.

The question at the end of 2011 was whether one particular exotic particle, the Higgs boson, actually existed. The folks at CERN were hard at work combing through a terrifying number of collisions for these events, and the hope was that they’d soon be able to decide whether there was enough evidence to say that the Higgs boson was real.

Farhi then concluded the recitation by mentioning that there would be both excitement and disappointment whether or not the LHC actually found the Higgs.

A student interjected. “Wait, what? Doesn’t everyone want to find this particle?”

I hope that this gives some sense of how much was riding on the LHC’s results.

Now, after years of work, a conference date was finally set: on Tuesday, December 13, 2011, CERN would announce whether they had found any evidence for the Higgs. Before that date, anyone who knew the results was put under an international scientific embargo not to talk about anything related to their work. This was CERN’s moment, and so all lips were sealed.

At least, that was the plan.

The Physics Colloquium schedule is set at the beginning of the semester. You can view the archives of past talks online, if you’d like. And if you look into the Fall 2011 lineup, you’ll notice the following talk (from which I obtained this blog post’s title): 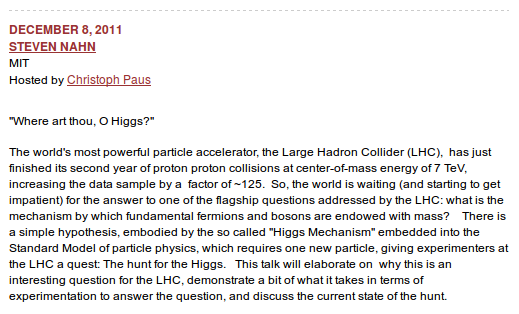 A couple things to note. One, Stephen Nahn is a big deal: at the time, he served as MIT’s chief liaison to CERN, and so he knew quite a bit about the Higgs. Two, the date of the talk was December 8th, a full five days before the CERN announcement, and well within that embargo period.

Naturally, my friends and I decided to go. We walked in early and sat in the middle of the sixth row (or thereabouts) in 10-250. Sitting in the center of the room, it was easy for us to watch people file in. Imagine the scene: the Physics Department faculty generally as a group takes this Thursday afternoon as a break, and so the room degree-per-capita metric is rising steadily. The astrophysicists form their own clique in the stage-right seating section; up in front and to stage left, the string theorists hang out and chat. Others sprinkle themselves around the room.

The talk began with Dr. Nahn covering a history of the search for the Higgs boson. The real hunt at that point was to work out the the mass associated with the Higgs: decades of work had narrowed the range of possible values for the particle’s mass, and at this point it was believed to be between 115 and 130 GeV[?]. Dr. Nahn explained the technical capabilities of the Large Hadron Collider, and how it was the first supercollider of its kind with enough power to generate a particle in that 115-130 GeV range—if such a particle existed.

Dr. Nahn talked as well about the explosion of popular interest in the Higgs. A couple of weeks before, the New York Times covered a public bet made on the existence of the Higgs. The competitors were two MIT professors: Professor Janet Conrad, and Professor Frank Wilczek. The bet was on whether CERN could find the Higgs at a mass below 150 GeV: if it could, then Wilczek would win, and if not, then Conrad would instead. The prize? Chocolate coins. 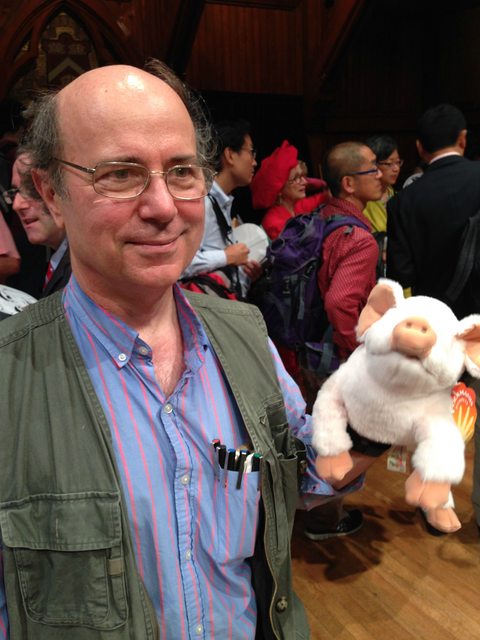 Frank Wilczek, at the 2014 Ig Nobel Awards. No, I don’t know if he keeps the pig around constantly. I do know that he won the 2004 Nobel Prize in Physics for his work related to the strong nuclear force.

I don’t remember whether Dr. Conrad was present, but Dr. Wilczek certainly was: he was down in the second row, smiling throughout the talk. Dr. Nahn turned to him while mentioning this article and pulled from his podium a bag of…chocolate coins, to waive tauntingly at Dr. Wilczek. Whether or not Dr. Wilczek won the coins would fully depend on next week’s results, which Steven Nahn knew but was certainly not going to reveal just yet.

It turned out, though, that Dr. Nahn had a surprise for us. He was still under that aforementioned International Scientific Embargo™, but he had received special permission—seeing as we’re at MIT and all—to show those assembled a small slice of the results to be announced the following week. Charts missing crucial axes and explanations, and Dr. Nahn was going to click through them in his presentation at a rate of one or two every second.

The slides were, as expected, meaningless to me. At one point I saw the phrase “inverse femtobarn”: it’s a unit of particle collision intensity, but it looks particularly ridiculous when you see it flash by on secret slides prepared by the world’s top particle physicists.

It was over in a few seconds. Dr. Nahn turned to the audience for questions, the first of which came from a professor to my right. To be more specific, I can only assume that what was asked was a question, as at the time I didn’t recognize most of the words in his sentence. So it went for a couple more questions.

And then Dr. Nahn took a question from the back of the room. It was asked by a graduate student, who was leaning back with his feet up on the row of chairs in front of him.

“Professor, could you go back to slide twenty-seven, please?”

Dr. Nahn turned to the projector screen and clicked back to slide 27. It was one of the embargoed data slides, which had only been on the screen for a split-second before: 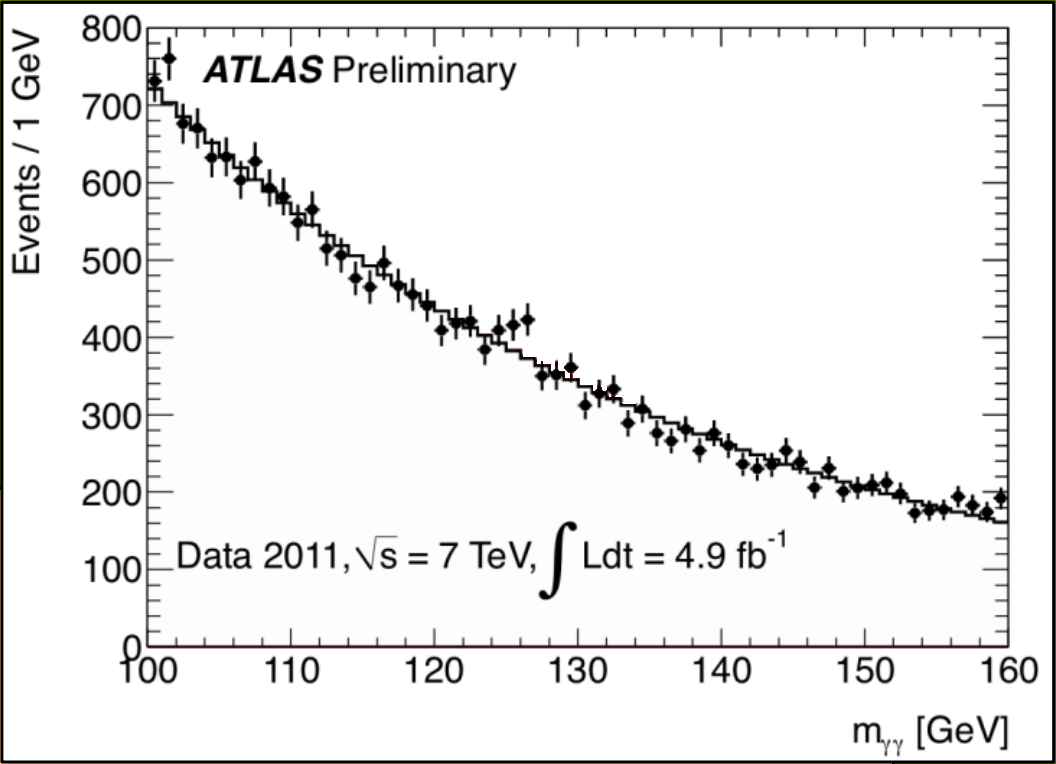 After going through CERN slides from December 2011, I’m pretty sure it was this one. I had to re-censor the legends and highlighting to approximate what was on display.

Then came the multi-billion-euro question.

“Professor Nahn, can you explain that anomalous blip in your data near 125 GeV?”

The room was silent.

People looked back and forth between the student and the slide. Dr. Nahn stuttered a couple of times without much to say. Here, someone in the back of the room had just pulled a needle out of a Powerpoint haystack. This was not on the agenda for today, but the room’s silence told us everything we needed to know: that blip was the first sign of the Higgs boson. It was a reveal which had been intended for the following week, but here it was, for everyone in 10-250 to see.

As it turns out, when you and a room full of people find out something before the rest of the world, there’s only one reasonable first reaction: nervous laughter. Nervous laughter, which soon became actual laughter, at how absurd the last minute had just been. Dr. Nahn, to his credit, stood nervously at the front of the room, but eventually acquiesced once it became clear that the cat was out of the bag. “Alright, but you can’t tell anyone!” he quipped, with a level of humor which can only come from a person under a particular strain of scientific duress.

As the laughter continued to roll, Dr. Nahn began to laugh as well, and finally picked up his bag of chocolate coins…and tossed them to Frank Wilczek.