Hey, if you're already hosed, you might as well have a good reason for it

From May 9th to May 13th (a Friday, naturally), MIT students endured that little piece of hell known as dead week. Yes, dead week. How aptly named.

Some people call it hell week, but I’ve found that even in the short span of two semesters, the term starts to lose its meaning. It’s like calling everything and everyone a flurg – you start to wonder what that even means and…well, why are you saying it so much, anyway? (Maybe ask Fodor? Has anybody ever read any of Fodor’s stuff?)

The way I see it, every week with a test coupled with at least one or two p-sets has constituted, at some point, a hell week. But dead week is on a whole new level. It’s the equivalent of a reading period at MIT, only classes continue to run up until the Friday of that week. So basically, you’re learning and re-learning things at the same time, but hey, no p-sets due, right?

And so you hold on dearly to that heartwarming fact… 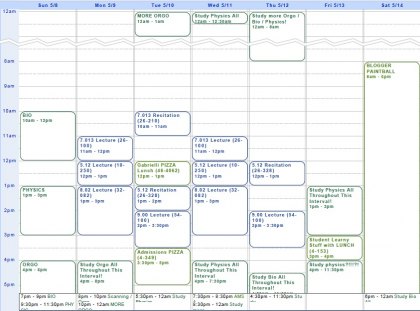 Not pictured: The wake for my recently-lost composure

Couple that with the fact that I didn’t adhere to the end times of my study sessions too often when it got closer to “bedtime,” and you can see just how dead you can get. But wait! What’s that? 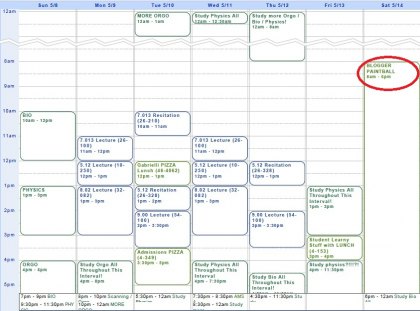 IT’S IN ALL CAPS SO THEREFORE IT IS IMPORTANTYes. That’s MIT tip number one: when studying for long stretches of time, allot some study break time, or you will go insane. In light of this, some of the bloggers decided to be some serious ballers up in New Hampshire, which is to say we went paintballing at OSG. Among the good sports were Chris Peterson (my boss), Elijah, Cam, and former bloggers Jess, Kim, and Keri.

The venue itself was incredible. Imagine the most forest-y, most outdoors-y place you’ve ever been to, and dump a few ships, wooden towers, a castle, a minivan, and makeshift ditches and trenches in it. That’s OSG, a place where the barriers behind which you crouch always seem to have a fresh new paint job, and where the myriad tactical locations and thick collection of trees makes you uneasy to venture anywhere without steady nerves, some sharpshooting, or adequate cover fire.

A man with over 17 years of experience of designing maps threw together his Engineer-like creativity and crafted eight fields for us to fire off paintballs at 260 feet per second. Since I don’t like making things too abstract, let me give you an idea of what that can do. For instance, my jacket liner was always zipped throughout the entire day, and in spite of that, one paintball round went right through that and hit the shirt underneath. 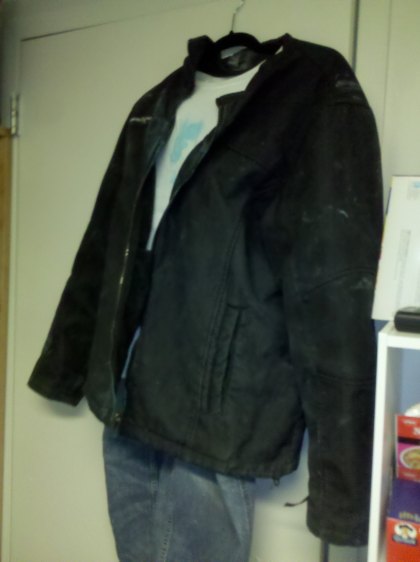 Dang.Since I haven’t outed myself as a paintball expert, you might be calling shenanigans due to the lack of paint on the liner. Trust me: I got absolutely covered, just not at that angle (and according to one of the workers at OSG, that means I tried really, really hard!)

So you’ve probably already gleaned that, like a molecule of bromoethane in sodium hydroxide and dimethyl sulfoxide, I got backside attacked. (Yes, that was in honor of the 5.12 test that I didn’t study that much for that day.)

Here, the Br (read: my pride) is the leaving group after being hit in embarrassing ways.
According to Chris, it’s done wonders for employee morale here at admissions. I can sort of see what he’s driving at; nothing says “camaraderie” and “great team building exercises” like pelting the ever-loving stuffing out of your coworkers with several rounds of paint to turn them into walking canvases.

In fact, on some occasions you’re given quite the colorful palette.

The first thought that came to mind? Weaponized easter eggs.
(Photo from a generous Wikimedia Commons contributor.)
(Our color selection was a bit more limited. My hands ended up looking like a Na’vi’s when I was done.)

When I came back from the paintballing excursion, I felt drained in the most cathartic way. Sublimating your worries into something different lets all the stress exit the body like steam hissing out of an engine. You’re cooled down, rested up, decompressed, and ready to get going again.

And that’s how you resurrect yourself after dead week.