I’m very lucky in that my family lives in central Pennsylvania, which is only eight to twelve hours from Boston through New York City depending on traffic and wait time between connecting busses. I usually prefer busses to more expensive and less environmentally friendly planes, unless it’s for something important, like, recently, picking my little brother up early from a field trip at the Pittsburgh Zoo to go on a road trip to Illinois, which was as ridiculous and as fun as it sounds.

But travelling is stressful and twelve hours is a long time to spend in a room with 50 strangers, even if that room is moving toward family and camping and happiness. I’ve collected 400 hours of bus angst over the past three years, of which 20 happened this past weekend. Usually I take a night bus and sleep through it but this weekend that was not the case. The trip back was wonderful, because my mom packed me a lunch, but the trip there was less wonderful, because I did not pack me a lunch. It ended up being twice as long as it was supposed to be, which made matters worse.

While I was there I wrote an unhappy list of all the people I was unhappy at, which Cory R. ’14 has titled “All Aboard the Rage Bus” and which a few days later is hopefully more funny than unhappy. Here it is:

At a pit stop, the lady who edged into the middle of the line to the bathroom and after ten minutes of skulking asked a polite teenager if anyone remembered where her spot was. You just discretely cut three people. That was very sneaky but I’m on to you.

Dude who squashed my backpack full of clean clothes and powdered chocolate against the corner even though there was plenty of room for his stuff in the overhead compartment, then moved my bag to another compartment after I asked him not to do that.

Bus driver who wouldn’t let me cross the street to CVS when we were stopped, even though other people were doing it. I’m a grown adult. I can decide when a comprehensive snack selection is worth running through traffic.

Me, for looking at least four years younger than I am.

Me, for not bringing snacks.

Dude and his girlfriend who sat behind me, the latter with his long legs all the way under my seat, occasionally awkwardly touching my feet with his feet, the former with her legs swathed over her boyfriend’s body, occasionally awkwardly touching her bare feet to my shoulder. I’m trying my hardest to shrink myself into my book and you’re feet making it feet agonizing feet.

I know you’re not a bus, but United Airlines, for overestimating the size of your plane by half a plane, making me take another plane, filling that plane, and then crushing my glassware that was never supposed to be checked because your overhead bins were too full of extra passengers. Back to buses.

The two guys who put their bags on the empty seats next to them when I tried to sit there, even though it was 3 am and the rest of the empty seats had half an unconscious person in them that I really didn’t want to wake.

Megabus, for leaving promptly at 3 am, minus a minute or plus two and a half hours.

The same guys as above, again, for talking loudly at each other and their important bags at 3 am.

Greyhound, for having a web site that your on-board wi-fi cannot load.

Greyhound, for not always having power outlets.

Megabus, for having power outlets in weird places.

Universe, for not having ubiquitous power outlets.

A One bus, for trying to shove a whole extra person into your van, which isn’t even a bus. The kindergarten-sized folding chair you dug out of the trunk did not have a seatbelt. 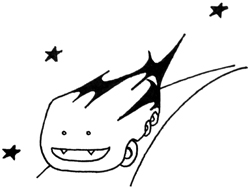 I didn’t draw it on a bus, because then it would have looked (more) like a porcupine.