As I lay face down struggling to move in a puddle of 40 degree water thinking about the life decisions I’ve made to lead me there, I noticed a strange white glint out of the corner of my eye. I turned my head as best I could to get a better look at was was so alluring a distraction in the otherwise utter blackness surrounding me. I recognized it from somewhere, and my mind reeled to remember the name for it. Then all of a sudden I remembered:

You see, it was my first time caving (what? What did YOU think was going on?) and I was completely enamored with the thrill of it all. When I strapped on my helmet and pads, in my mind I had the entrance pictured as something you’d just waltz into, and the rest of the cave would be a bit like any other moderately difficult hike –– just underground.

Instead, I was met with this as the entrance: 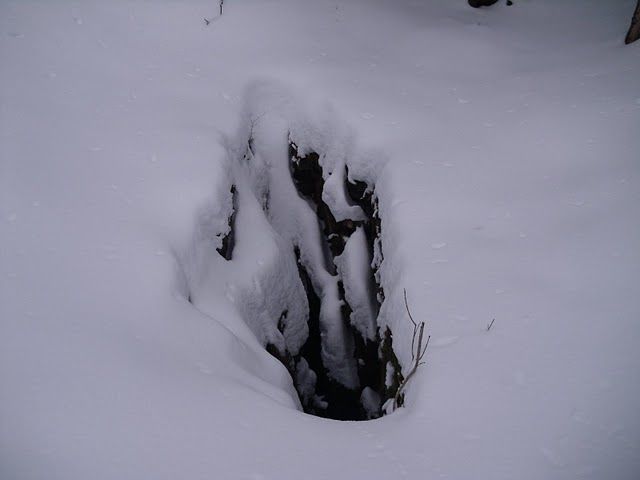 As you can see, there’s not to fit through there, and it’s a bit…..steep.

The nice part though was that though it was about 10F degrees outside, it warmed up to a comparatively balmy 40F inside the cave. (Turns out caves maintain a near constant temperature throughout the year. It’s one of those things that makes perfect sense once you think about it, but I’d just never thought about it before.) 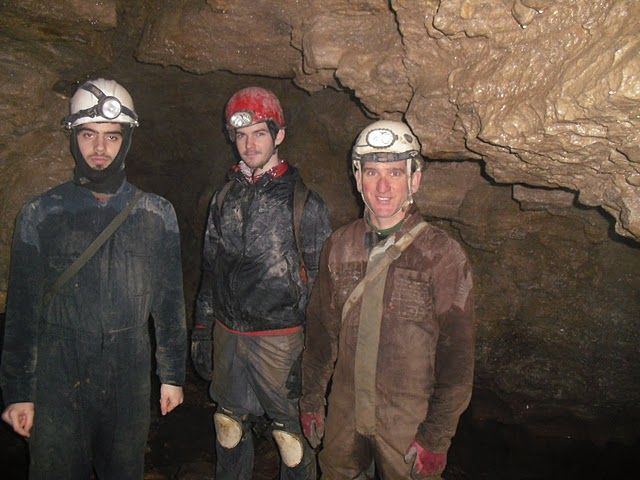 I immediately gained a new appreciation for why we all wore helmets and knee pads.

After a few tight squeezes, it opened up into a large room that you could stand upright in, appropriately called “The Big Room” (though given the size of other passages in the cave, that’s not exactly a difficult title to win….). 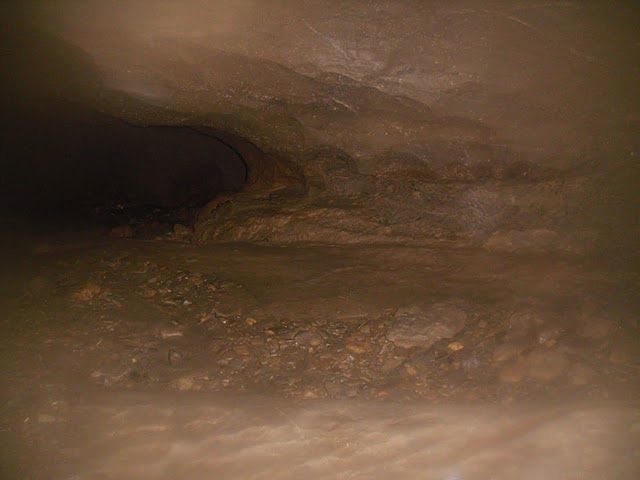 I actually don’t have too many photos from the trip, because the majority of our time was spent crawling on my face through cracks, or over the top of chasms that you could look into and see the glint of lost headlamps, pads, and water bottles.

One tight passage in particular put me squeezing through a crack that ran along the floor on my left side, not unlike trying to swim the sidestroke on land. My friends asked me how I was doing: 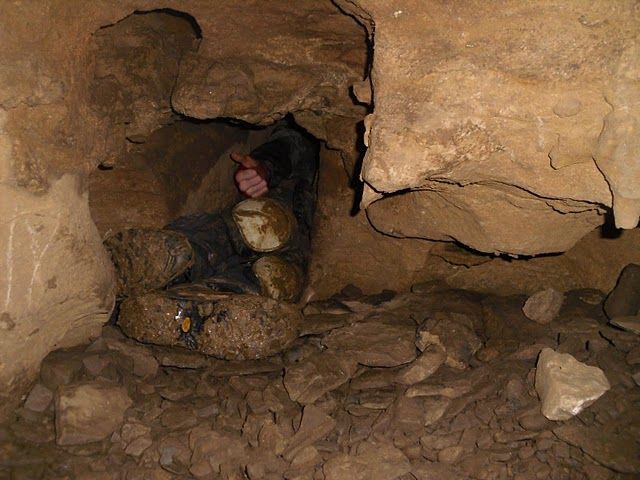 The passage was so narrow that I had to take off my helmet and push it in front of me. It felt like a good thing to take a picture of, so I did my best: 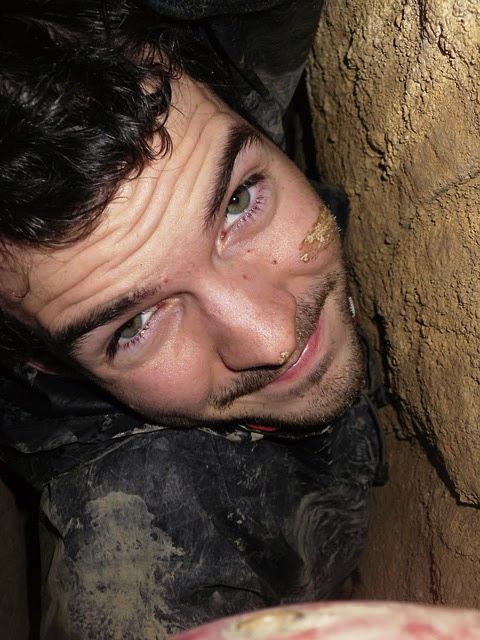 And if you’re curious how much of this squeeze I had left in front of me: 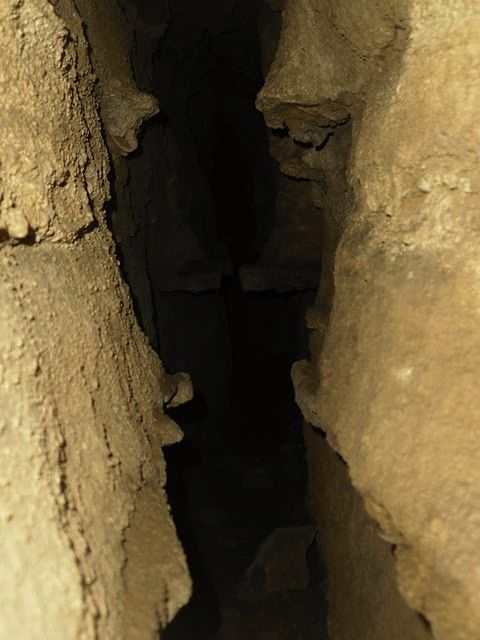 Needless to say, caving gets you sore in weird places.

As we were wrapping things up though, one of the last rooms we went through had a bit of water in it. And when I mean a bit, I really mean we were wading through it, and ducking under arches trying to keep as much as dry as possible. 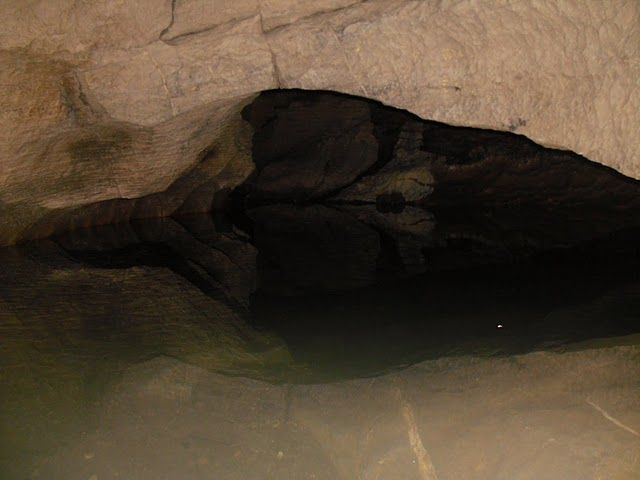 Almost immediately after emerging from the water, we saw signs that we were nearing the end of the line: 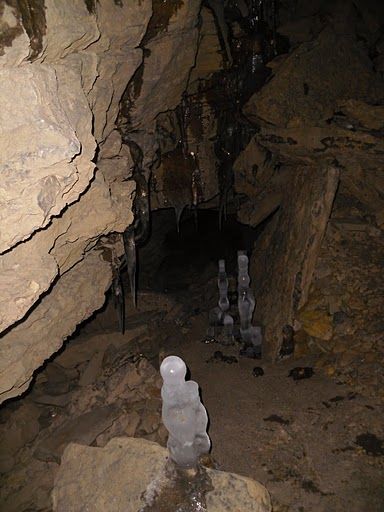 I was mentally prepared for it, and I unfastened anything that was in danger of freezing shut, but it’s the most bizarre feeling to be running in clothes that are freezing solid while you’re wearing them. They just get stiffer and stiffer. By the time we got to the car, I was pretty cold, and I could definitely feel it in my hands (or not, as the case was). I managed to get my boots and socks off, but I forgot to take my watch off, so when I tried to take my wet thermal top off, my arm got stuck in the sleeve. And then the combination of my rapidly declining dexterity and the equally rapidly increasing stiffness of what I used to know as my sleeve meant it wasn’t coming off. So I just took it as a sunk cost and figured I’d work something out.

Once inside the car feeling the burning ache of feeling return to my hands and feet, we were ready to bag up our clothes and head out. I jumped out to put my clothes in a bag, and to my surprise they were completely frozen solid. Rock hard. My boot laces looked like uncooked spaghetti. Being from the good ol’ state of Texas I was in complete awe that something could freeze that fast. Incredible.

What’s even more incredible though is that there are a group of people at MIT who do this sort of thing all the time (maybe it’s that caves are dark and MIT students are largely nocturnal?). The MIT Caving Club will gladly take anyone with an interest in shucking off all evolutionary progress back into the caves. It’s just one of the rich multitude of student groups and activities you can participate in while you’re here at the ‘tvte.