No, there are no LEDs

Hacking at MIT is steeped in tradition and still occurs to this day. Hackers deploying any hack always subscribe to a strict code of ethics. This code of ethics is:

# Be subtle. Don’t leave evidence that you were there.
# Always leave things as you found them, or better.
# Leave no permanent damage, both during hacks and while hacking.
# Don’t steal anything. If you must borrow something, always return it– perhaps even leave a note saying when it will be returned.
# Brute force is the last resort of the incompetent.
# Sign-ins should not be seen by the general public. Sign-ins exhibit one’s pride in having found a location. Most hackers aren’t proud of discovering Lobby 7.
# Don’t drink and hack. Enough said.
# Don’t drop things (without a ground crew).
# Don’t hack alone.
# Above all, exercise common sense

There was a hack today! Like any hack, the code of ethics was strictly followed (as per usual) with the possible exception of the last one, but I’ll let you be the judge of that. This morning I woke up and saw this in my inbox: 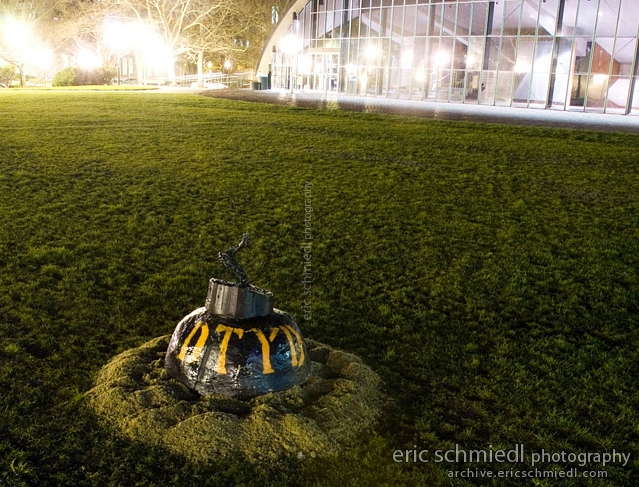 “A large black fake bomb made from concrete appeared on Kresge Oval on 4/24/09 adorned with the letters ‘DTYD’, presumably to advertise the party of the same name put on by the Burton Third Bombers living group the following day.”

Boston has had its fair share of bomb issues, so when I saw this picture all sorts of little alarm bells went off in my head. Surely, if LEDs freak out the police, a huge concrete, 600 lb fake bomb would make them go insane. It did. 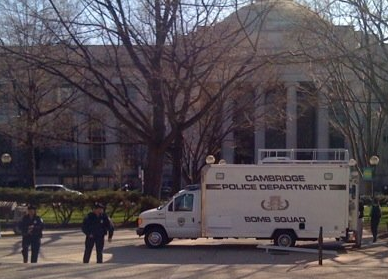 Turns out the bomb squad wasn’t so happy with a giant fake bomb and so they ended up using their own explosives to “detonate it,” deem it inert, and then let MIT use a forklift to remove it.

This is one of those cases when, even if the ethics (most of them?) were followed, it still didn’t work out exactly how it was intended. In the spirit of most hacks, though, it was rather impressive. How did hackers manage to get a 600 pound concrete sphere to Kresge anyway? So that’s the excitement for the day. Giant fake bomb, bomb squad, forklift, and DTYD tonight. : )