you walk into h-mart and see the paris baguette cafe immediately to your left, and go-go curry straight ahead. all around are tv screens of cooking asian dishes with korean subtitles. the waft of delicious curry and donkatsu fills your nose and you smile. are you going to get donkatsu today? nope. you’ve decided to give all the ramen places you’re familiar with another visit, and you’ve decided to get the worst out of the way. you pass the food establishment that you should always pick over the one you’re about to approach, without fail: sapporo ramen, h-mart, central.

there are many choices for ramen here. unfortunately, going with a conservative, simple choice is usually better. the central ramen (shoyu) is a good idea.

the broth is slightly clear and has a coat of oil on top. i always try the broth first thing whenever i eat ramen. that’s salty. i take another sip. it’s pretty okay, but it’s too oily and too salty. the heat is an cheap trick that makes subpar broths taste stronger. the heat masks the fact that at its core, this broth definitely tastes  off.⁠01 cambridge tap water comes to mind and i shudder.

the noodles are curly, chewy and just fine, they cut the saltiness of the broth they’ve been sitting in, the bamboo shoots⁠02 in japanese, menma as well as the pork slices are overwhelmingly average. the scallions and u-choy are green, and they exist.

so, is this worth it? well… it’s not terrible, and it’s ten dollars, which is cheap for ramen here. but honestly, why get sapporo ramen if you’re hungry and around central when you could get go-go curry instead?

the line is always long at night. the people are all what the average person would consider young: safe to say they’re in their twenties and thirties. the people in front of me are conversing quizzically about their friend-slash-bride getting separate dresses for the ceremony and the reception. wearing it for thirty minutes and never wearing it again?

i’m so far out in line that no store light shines upon my head. instead, i imagine the warm tonkotsu broth filling my stomach as i browse reddit, waiting for my turn to sit.

if you’re going for the first time, get the shio: it’s their most well-known dish and is flavored with just salt on top of the rich, white pork bone broth. on top are skinny, but long menma, two slices of pork, scallions, i think kombu..? and a single umeboshi.⁠03 a small japanese pickled plum.

what makes the broth so great is that it doesn’t try and hit you with flavor on the first contact between your tongue and the broth. first, you feel the smooth, subtle flavor of the broth traveling posterior across your tongue, and then you really feel the core of the umami flavor a few moments later. but it’s not too acute, nor is it too salty, even though its name is salt ramen. i think that’s the magic tonkotsu, of using bone in the broth. one of my favorite korean soup-based dishes is ox-bone soup for the same reason of that subtle, non-aggressive but extremely filling umami flavor.

i think back to h-mart sapporo ramen and the sinking feeling of looking at the bowl once i was done with the noodles, feeling how salty and lifeless and unappetizing it was. it was just liquid. but at santouka, i catch a sesame seed or scallion slice in every spoon. it’s fun. and it’s fast – i fear to look behind me, but i do anyway. i can’t see the end of the line outside the window.

i scarf down the pork, the egg, drink all the soup, and leave no longer than a half hour after i sat down. is it extraordinary ramen? no. but it’s one that i’m always happy to go to, and santouka is high in the tier list.

there are actually two santouka ramen shops around MIT: one is nestled between newbury street and boylston street in boston, and the other is on the outskirts of harvard square. i’d say they’re both far walks. the santouka in boston is a shorter walk, but the santouka in harvard is easier to get to through the red line. (i suppose you could just take a bus up massachusetts avenue through boston for the former, though.)

the harvard santouka is bigger, and in my opinion, better. for some reason the ramen just tastes better there. and there’s a wider selection of food to order: the last time i went here with my SO, we got takoyaki and coffee jelly. takoyaki is takoyaki, but the coffee jelly was sublime. i felt like saiki kusuo in that new netflix original anime ‘the disastrous life of saiki k.’⁠04 if there's anyone out there that have actually watched this anime, you are good. 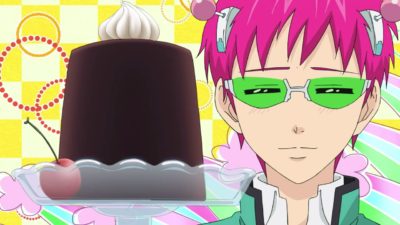 my honest answer to ‘what’s the best ramen around MIT?’ is probably going to be this place here. yes, it’s a ‘chain’, but it’s also really popular and for good reason. also, ramen is really subjective and there are so many varieties and styles that you can’t just rate ramen places on a unilateral scale (ahem except for hmart sapporo ahem).

this is the ramen you eat when you’re sad and need to get inspired in your life. the ramen is not the point of yume wo katare, although it isn’t bad ramen and is in fact pretty good, except it trades off consistency in flavor throughout the bowl in exchange for sheer volume of food.

the way yume wo katare works is that it’s a dream workshop (yume wo katare means ‘share your dream’ in japanese). everyone coming to yume wo katare gets a free dream (or choice to not share a dream, that’s okay too.) dreams are $0 and free to share. however, every dreamer must order at least one bowl of ramen⁠05 you might be asking how that's different from saying it's a ramen place that lets you share your dreams for free. this makes more sense, but the dreams are literally on the physical menu, so idk man. and attempt to finish it before sharing their dreams to everyone else in the room.

you order your ramen and take the room in. handwritten dreams are framed and placed all around. it’s noisy, but a good noisy: the kitchen is a one-man band featuring the owner, intermittently asking people concerning their ramen, “would you like some delicious garlic?”⁠06 it's such a phrase that there are t-shirts about it. this time, the owner shared a story of how he was understaffed last week but opened anyway and asked customers to come up to the kitchen and work for their bowls. it’s a good story and warms the heart.

but now it is time to warm the belly. you look at the towering monstrosity of a bowl in front of you. the total volume is twice the bowl, with broth and ramen filled to the brim of the bowl, then topped with a heinous amount of bean sprouts and Delicious Garlic. fat pork slices are laid out along the slant of the cone of bean sprouts. it’s a message: there’s a lot you have to go through before even thinking of starting on the noodles. the pork is incredibly soft yet tender and full of umami flavor, and not too salty. the broth is not complex and is satisfying to drink. the noodles are pretty flavorless and a bit much, but there’s a lot of pure volume for people that like volume.

there’s a grade that you receive before sharing your dream: if you cleaned out the entire bowl (rare) that’s a perfect: if you ate pretty much everything except some bits and broth, that’s a good job: if you barely went through the noodles at all, it’s an almost. people cheer and clap for you regardless of your grade, and it’s meant to be supportive: the philosophy is that the effort that you put into finishing your bowl translates to the effort you’ll put into achieving your dreams, whatever they may be.

and listening to other people’s dreams are interesting: students want to do well in school, people want to be good at their jobs, find love, and make people laugh. i want to redo my personal website. the person next to me wants to go to Europe. we want to live well. 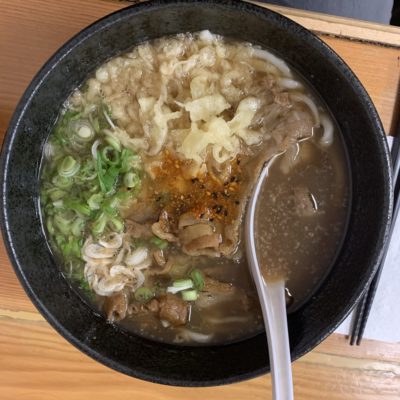 pork: just slightly crunchy, but also fatty and so many flavors

how do i describe this flavor profile

it’s the exact opposite of the shio ramen

i thought udons were supposed to be innocent? what is this?

so much scallion, so generous, so kind

the noodles, soft and delicate, made in house – i know from the peppered streaks of flour on the machine in front of me

the crunchy flakes in here take me home

i’m going to finish this now

I haven’t been here in a while, but I will probably go here next time I want ramen and keep you updated. There are a couple main points I’ll touch on: first, this is the ‘real’ Sapporo Ramen, and not the H-Mart one.  Second, their 10-hour chicken broth is the thickest broth you’ll find around MIT’s vicinity, and has a wonderful depth of flavor. Third, Sapporo Ramen and Yume Ga Arukara are next to each other in the food court of Lesley University. That means they don’t have an exterior store front, so keep that in mind when looking for these places.

I’ve been here twice, but it’s been a while since I’ve been here so I’m also looking to visit it soon. From what I remember, the ramen is really good: but they also do shabu shabu hot pot, which is the reasoning for their name. It’s slightly out there and near the Cambridge Galleria (a mall). Not as many people have heard of this place in my experience.

It’s been a while since I last came here so Ganko Ittetsu is also on my list to visit. It’s a small ramen shop next to Brookline Comics and Beacon Street. It was good, but not as good as Santouka in my memory.

Their ramen isn’t good, get something else if you’re on Newbury Street.