The latest from the West Coast.

I’m on the West Coast now, and things are great. First, I flew into Reno, and took a drive downtown: 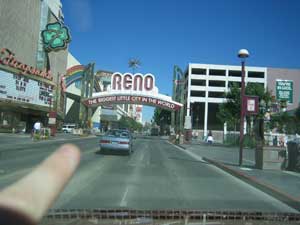 I drove on to my meeting with the fantastic folks at the Davidson Institute and the new Davidson Academy. The Davidson Institute offers many programs of interest to the kinds of students who would be thinking of MIT, including the Davidson Fellows Award for students under the age of 18 who have done significant work: an accomplishment that experts in the field recognize as significant and has the potential to make a positive contribution to society; and GT-Cybersource, a database of resources for gifted students. The Institute offers many programs, and services, you should definitely check them out. They’re doing wonderful things for education in this country.

While I was in Reno, I also saw the Great Reno Balloon Race, which includes lots of beautiful hot air ballons. There was even a beaver named Bud E. Beaver (TIM the Beaver’s cousin?).

After Reno, I was off to Sacramento, where I hosted a Central Meeting for folks from the Central Valley, Northern Nevada, and other areas around Sacramento. The meeting had a record sized crowd for Sacramento, so I had to put our Educational Counselors (alumni volunteers and interviewers) to work setting up chairs for this large crowd! 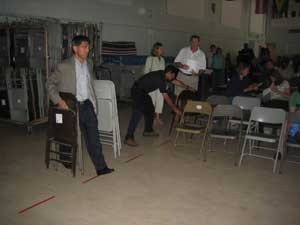 During the meeting, I learned (the hard way) how not to pronounce “Nevada” (hint: it’s not Ne-vah-dah). I’m sorry about that, Nevadans!

Following the meeting, to thank the ECs for their help, we went out to dinner together. 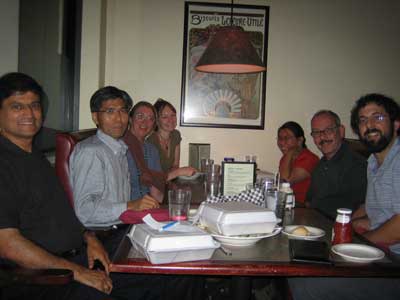 If you live in Sacramento or Northen Nevada, one of these kind folks could be your interviewer!

After the meeting (and before the dinner), a young lady and her father asked me a series of questions; I’ll post them & the answers here, for the record, since these are fairly common questions. They asked, does MIT have a football team? Is there a football stadium? Do you have cheerleaders? The answer to all of these questions is yes.

Does MIT have a football team?

Yes, we do. I’ve seen photographs of the MIT football team from 100 years ago, and the modern team has been in existance for nearly 30 years, compiling a losing (but not awful) record over that time. Meanwhile, members of the MIT Varsity Football Team have gone on to such accolades as Rhodes and Marshall Scholarships, etc. MIT lost its home opener this weekend, but I know the team is hopeful for the season.

Is there a football stadium?

Yes, and it’s an interesting story: the stadium is Steinbrenner Stadium, named for Henry G. Steinbrenner ’27. Yes, that Steinbrenner: Henry is best known as the father of George Steinbrenner, owner of the New York Yankees. Henry studied Ocean Engineering at MIT and became a prominent shipping executive as President of Kinsman Transit Company. Outside the classroom, he was a national champion hurdler and competed in the 1928 Olympics in Amsterdam.

Do you have cheerleaders?

This, I guess, is a pretty common question. Here’s what Mollie ’06 (an MIT cheerleader) had to say about it:

I’ve had to get used to people saying in disbelief, “Wow, I didn’t even know MIT had cheerleaders! Do you cheer for the chess team?” I’ve also had to perfect the sort of fake smile and forced giggle that people seem to expect when they say such breathtakingly witty things. Why is it funny that someone could be smart and sexy at the same time? I mean, you can be short and blonde at the same time. You can be nearsighted and blue-eyed at the same time. You can also be an MIT student and be perfectly outwardly normal at the same time — although you don’t have to be. What makes that so difficult to process? People are complex. MIT students are complex. This is a fact of life. 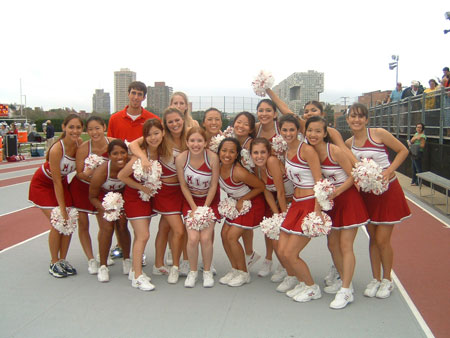 In the interest of full disclosure, though, I should note that MIT is not one of those big football schools where thousands of fans come to the games and drink too much and then go do stupid things. But does that mean we don’t have school spirit? Oh no. We’ve got lots of school spirit, we just don’t show it in “traditional” ways like football, homecoming, pep rallies. But ask any MIT student/alum about the Brass Rat or hacks or whatever, and you’ll be talking to one excited MIT person. We’ve got spirit, yes we do, we’ve got spirit, how ’bout you?

Next up: San Jose and Silicon Valley.