New York, New York, and other answers to your other questions, too.

A lot of you have written me to tell me you’ve voted, and it’s INCREDIBLE have all your support! Voting’s open until the 28th, so be sure to share this shortened link with your friends, family, etc.: http://urltea.com/1p1d. You can only vote once per computer, but you can also use your iPhone, Treo, Blackjack, etc.. It takes literally two clicks and you could make a huge difference for me and my family.

Please do note that I’m aware of the negative comments some people have directed towards the other bloggers. This competition is NOT about that, and I hope you address my wishes when I ask you to respect them. They’re all great competitors who have worked equally hard to get this far, and I’d love it if you could support me without starting a war.

Regardless of the outcome, though, it’s awesome to know I’m reaching so many people, and it definitely makes my day to get emails saying I helped your admissions process. Thanks again for everything, guys.

With that – you’ve got my back, I’ve got yours. Answers to your questions coming right up:

Ally asked: I think I remember you mentioning being vegetarian (I could be wrong on this, maybe it was another blogger). How’s it being a vegetarian at MIT. Do you know any vegans/do you think a vegan would survive?

I am in fact a vegetarian at MIT, and I’m not dead yet :) It’s definitely possible for a vegan to survive! It’s difficult if you want to eat in the dining halls every night – you’d probably end up having salad every night, or a veggie burger, since there are always vegetarian options but they’re not necessarily vegan. All of the dorms have at least one kitchen, though, and in places like Burton-Conner every suite has one. The only issue is finding time to cook for yourself, which isn’t exactly easy in between problem sets, but it can make for a good study break. And there’s a Whole Foods and a Trader Joe’s relatively close by, so it’s not too much trouble to get fresh fruits and vegetables – or you can order them online (and fairly cheaply as well) from Peapod.

Ally also asks: On a completely unrelated note: I love the MIT culture and so much about the school, but I’m a little bit scared. I’ve always been in advanced math classes (I’ll have taken through differential equations by the time I graduate) in high school, but never at the top of the math class. I’m willing to learn more but I’m scared that I’ll be totally swamped and not understand anything at MIT. Are there people who aren’t super good at math?

I KNEW Jessie (ex-blogger and MIT alum) had written a good response to a similar question, so I searched through the archives and pulled this up:

When I was a middle-school cross country and road runner, I used to get recruited by high school coaches. I didn’t understand why they all seemed so interested in me. I was a very good young runner, but I wasn’t one of the best, and I had poor form and was clumsy and didn’t pace myself very well. Why were they talking to me instead of the girls who were a little faster and had better form to boot? I think it was my mom who explained it to me. She pointed out that a top middle school runner with perfect form and pacing wasn’t very coachable, but that the coaches figured that with proper coaching, I could become a much better runner.

Admissions is a little like that. MIT wants the people who will benefit from the MIT culture and education the most, and will bring the most benefit to the MIT community. Stats ARE important, but that’s because MIT is a difficult place and they need to make sure that the people they admit are able to do the work. Stats don’t get you acceptance into MIT, they get you consideration. Once you demonstrate, with your application in full, that you probably have enough mathematical capability to handle 18.01 and 18.02, they don’t care whether you got a 740 or an 800 on the math portion of the SAT, or whether your GPA was 4.0 or 3.92.

There’s more of it at the original post, which is a really worthwhile read. The fact of the matter is, though, while the competition is always going to be intimidating, in the end it has nothing to do with them and everything to do with you (them being those who are always at the top of the class). It’s so easy to get caught up in all the stat posts going up on College Confidential about how great people have done on their AIME or SATs, but constantly fixating on stats is the wrong approach to the admissions process. There’s so much more that goes into the decisions that are made.

And yes, it’s true that the admissions committee is looking for someone with good grades and good scores, but that’s only part of the equation. There are things that are more important than being super good at math – a passion to learn, a drive to know more, a creative approach to solving problems – and if you can bring that to MIT, you can not only survive here, you can thrive here.

Look at this way – everyone works hard when they get to MIT. Even those who have never had to work before, those who have always been international mathletes get here and tear their hair out over 18.022 problem sets. There’s challenges around every corner for every student – but because you’ve had to work to do well, you’ll have the benefit of the experience of working hard. From someone who wasn’t always at the top, believe it when I say it can make all the difference.

Michael has a question: Jess, I had a question, how do you get placed in your dorm? Do you just get put in randomly? Because I would really like to have a single.. thanks!

I just answered this question – but don’t worry, it’s a good one! Living group is one of the most important factors to students’ happiness, so here’s my response again:

The housing process really is one of the coolest parts of being an MIT freshman. During the summer, Housing sends you a booklet with a page written by each of the dorms, along with a DVD with short movies made by each of the dorms (the i3 videos, or Interactive Introduction to the Institute, can be found here). You read, and watch, and then fill out a preference sheet online with a few words about yourself (no need to re-copy your college essay; think more of a personal ad). You’re also asked if you’d prefer a single, double, triple, or quad, but while your preferences are taken into account, they don’t necessarily mean you’ll get what you want (as it’s a lottery). You get temped in a dormitory, where you live for a week (or two if you choose to do a pre-orientation program) – which is a time period called REX, or Residence Exploration, during which you’re highly encouraged to check out the other dorms available to you. After that week you fill out another preference sheet, during which you can try to lottery into another dorm or elect to stay in your current dorm. This is not the case for Next House and McCormick, which are Residence-Based Advising dorms and thus will not allow you to move out of those dorms if you pref one of them.

After you get your final dorm, the in-house lottery occurs, which is a similar process in which you tour the open rooms, then choose your room and your roommate! Your dorm is really one of the most important contributors to your MIT experience, so choose wisely and be sure to explore your options.

Evan wondered: Do students ever have time to leave MIT? Like see Boston, Cambridge, etc.?
It’s funny that you asked, because 1) it makes for one of the best blog titles EVER and 2) this weekend was a long one, so I took the T (red line, from Kendall) to South Station, where I hopped on the $15 one-way Boston-to-New York Chinatown bus to see some friends from high school and crash on their NYU dorm room floor. We spent the weekend cooking massive amounts of food, finding tiny restaurants with incredible falafel, running through Central Park, getting shoved around in Times Square, and sobbing through Rent (which is, for the record, one of my favorite musicals of all time). 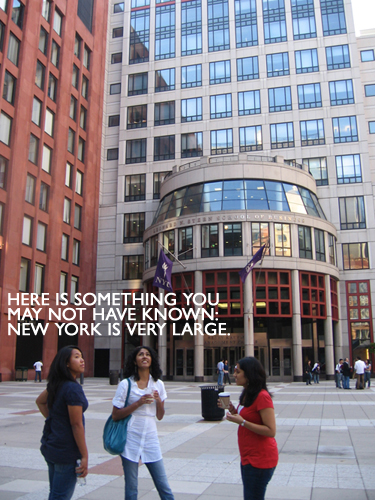 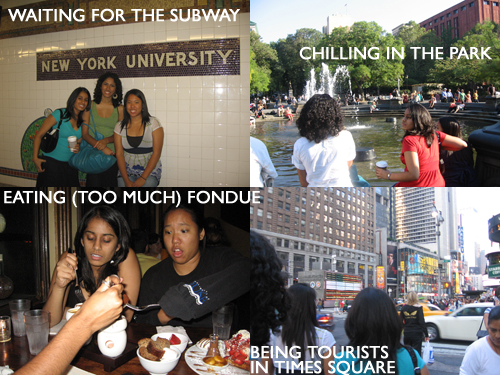 The crazy thing about NYU is that it’s directly in the city (sort of similar to BU, but even more spread out), as opposed to MIT’s location right on the border of Boston. My friend’s dorm was bordered directly by a Trader Joe’s, a Duane Reade, and several fruit stands – while our dorms are bordered by other dorms (with the exception Random, which is further down Mass Ave). It makes it easy for her to get groceries, but difficult for her to see her friends – we went to a party at a friend’s apartment, which was a good twenty minutes away by subway, a trip that took so long that I almost forgot where we were going by the time we got off the train. In contrast, MIT has two parts of campus, West and East Campus – West Campus has all its dorms in a row (hence the name Dorm Row), besides Simmons. East Campus consists of (where else?) East Campus and Senior Haus, and they’re almost directly perpendicular.

We don’t just leave campus on the long weekends, though – we do have events sponsored by MIT once in awhile. Monday evening was Next House’s annual formal: 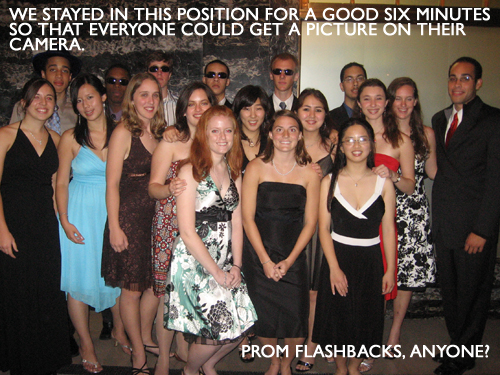 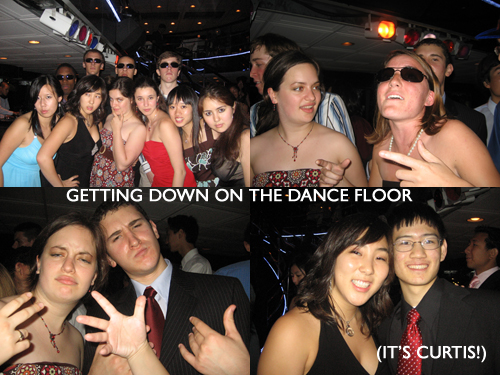 (Remember Curtis? Curtis is my genius friend from high school who takes pictures with me every year, in which our hair magically grows and shortens – last year, I claimed it was a metaphor for how much we’d matured and grown throughout our first months of college. This year, both of our haircuts have shortened.)

We do in fact have time to be social, but it’s up to you to make that time. And that takes a lot of time management skills, which is not something a lot of people have (myself included). But if you make the effort, MIT is an amazing campus in that it borders Cambridge and Boston, so you have the opportunity to experience both cities (and New York as well, for $15!) – even though they’re so close, they do have vastly different cultures.

There’s another part to this entry coming soon – I’ve got more answers! It was getting a bit long, though, so the next installment is coming soon, I promise. Feel free to throw your own question in the pile whenever you think of them. And keep breathing – there are still 22 days to go until Early Action hits..

23 responses to “REX and the City”