or, how to cook for yourself with zero skill

After a year and a half on a forced meal plan, I have now been freed from the shackles and am finally cooking for myself again. The first thing I did when I came to MacGregor? Get a rice cooker, because I haven’t had a rice cooker in forever. And oh man was it a great decision to get one.

We love rice cookers here in the blogs, and for good reason. First, rice is great. I’m a Filipino, so I love rice. Second, rice cookers are so easy to use. They’re actually magic in how they work. You put the rice, and the water, and you hit the switch, and that’s it.

Look at this rice cooker. This is the rice cooker I have. There is only one switch, which switches between warm and cook. Incredibly simple, nothing fancy. It is not expensive. It does not take a lot of space. And it cooks such a wide variety of things, rice and not rice, which make it a worthy investment. 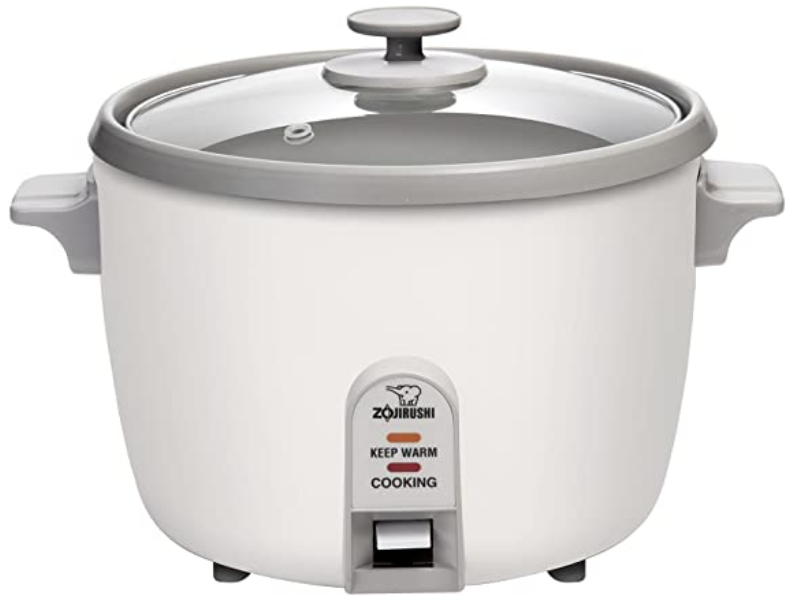 Please believe me when I say I barely know how to cook. Up until two weeks ago, I have never cooked meat. I chop vegetables really slowly and in very irregular shapes. Once, I tried to fry eggs over medium, and I ended up cracking the yolk so badly that I gave up and scrambled the eggs instead, and I have only scrambled eggs ever since. And yet, I have fed myself for the past two weeks, and, as far as I can tell, I have not died from malnourishment.

I get my groceries delivered from Daily Table and they have reasonably priced groceries. For my first week, I got some chicken, ground beef, tomatoes, peas, cheese, eggs, and rice. That lasted me more than a week’s worth of food.

The first thing I made was tomatoes and chicken with rice. Defrosting meat is a thing that you have to do, and takes time I guess? But I chopped up the chicken into pieces. I measured like four cups of rice, filled it water up to the line that said “4” inside the pot, put in the chicken, and set it to cook. After a few minutes, and I have no clue how many minutes it was, I put in three whole tomatoes, which were small enough that I was fine putting them in whole.

Then it was done. That was it. I added some furikake that I got from the HMart up in Central, and it was good. I have this bottle of furikake. Furikake is actually cheating when it comes to rice, and it probably isn’t that healthy but it makes rice taste good, so I don’t really care. Apparently you can add it to lots of other things too. 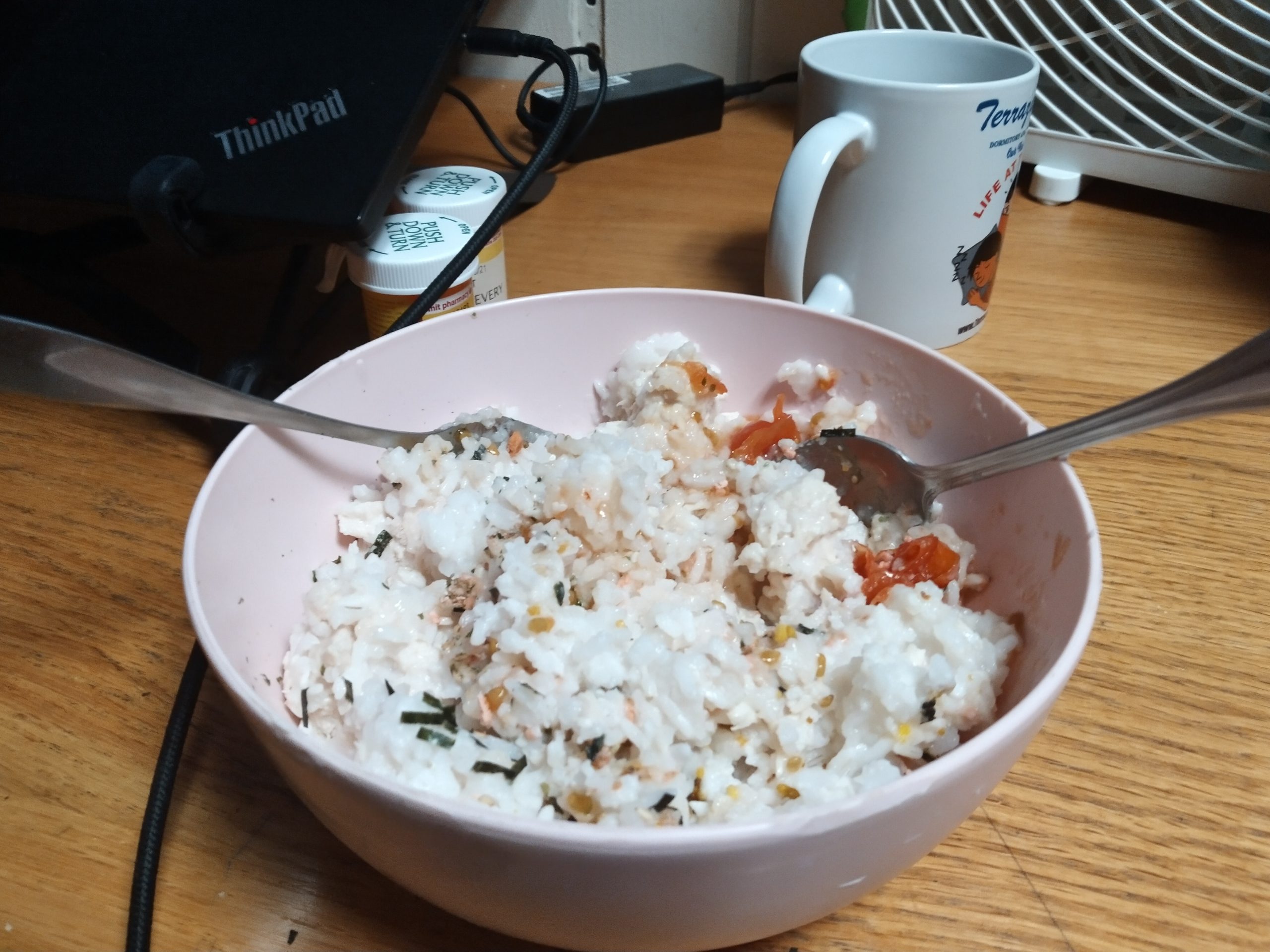 Was it good? Yes. Good enough that I ate it for two days. Does it look good? No, but who cares? I’m not cooking for Instagram, I’m cooking for myself! Did I follow a recipe? No. Did I have any idea what I was doing? No. How much chicken, how many tomatoes did I add? I don’t remember. I just kinda guessed. I think I added too much chicken that time, but whatever. How long did it take? Thirty minutes, max, and most of it was waiting for the rice cooker to cook.

Here’s another thing I did. I put in some ground beef and some oil, then I set to cook. After a few minutes, it looked cooked. I don’t know how many minutes it was. It just looked cooked. I know I should probably be caring about the temperature of the meat or whatever, but honestly, if it was that color, it’s probably fine. Then I put in the rice and some water, mixed, and kept it on cook. After a few minutes, I put in frozen peas, and some minced garlic. 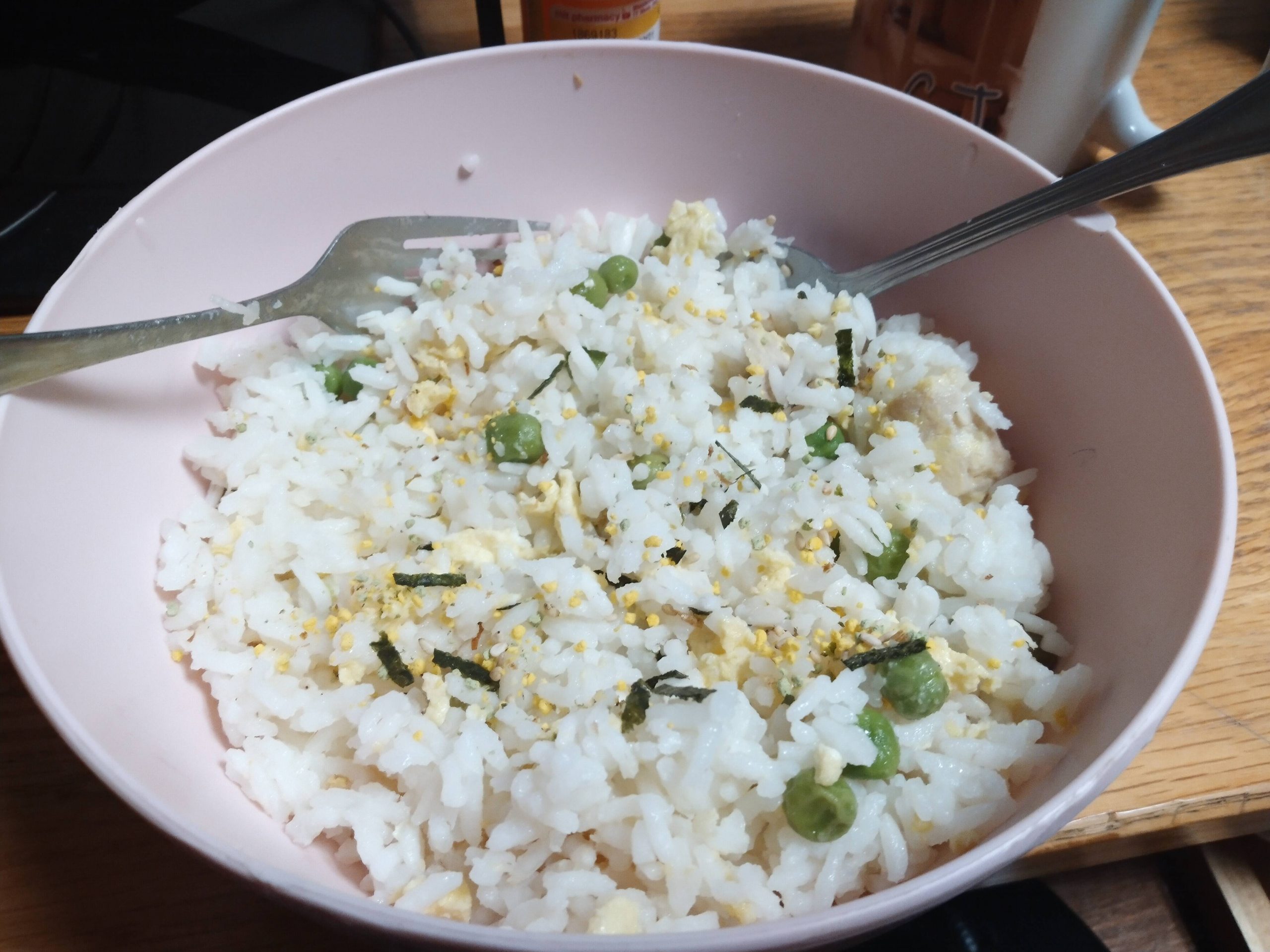 Then it was done. Ground beef, and peas, and rice. Does the recipe have a name? Nope. The theme was “whatever I had available”. The great thing about having ingredients that can go in a lot of different things is that you can mix and match whatever you want and it will probably work. And it worked. It was fine. It tasted good. It satisfied my hunger.

Another “recipe”, which is not really a recipe, in as much as it is an idea for what things you can combine. I added a little oil and some eggs in the rice cooker, set to cook, mixed for a bit, and waited until the eggs were cooked. Gordon Ramsay says that scrambled eggs should be scrambled in a bowl and have gentle heat or whatever, but I don’t care. I cracked the eggs into the pot, and I set it to cook, and who knows how hot it was? It got cooked. That was what mattered.

I added rice. I added tomatoes with the rice, and chopped them up this time. I added water. I set to cook. After it was cooked, I added some shredded cheese. And then I mixed. Tomatoes, eggs, cheese, and rice. 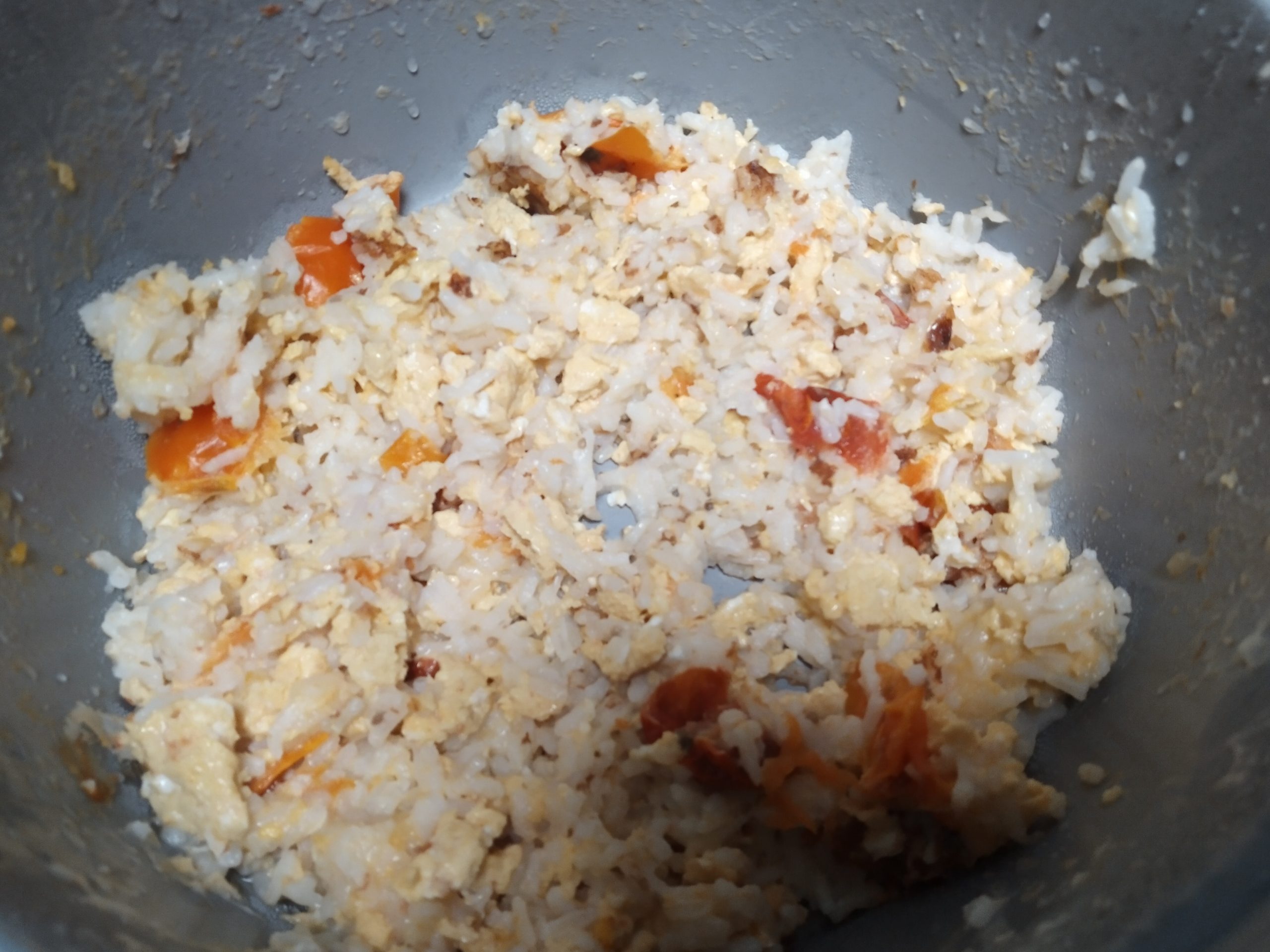 The picture’s horrible. I know. I don’t care. Your food doesn’t need to be aesthetic. It was a little bland so I added some more cheese and a little salt and it was better. Seasoning is important, but you can go a long way with just salt and whatever you have lying around. 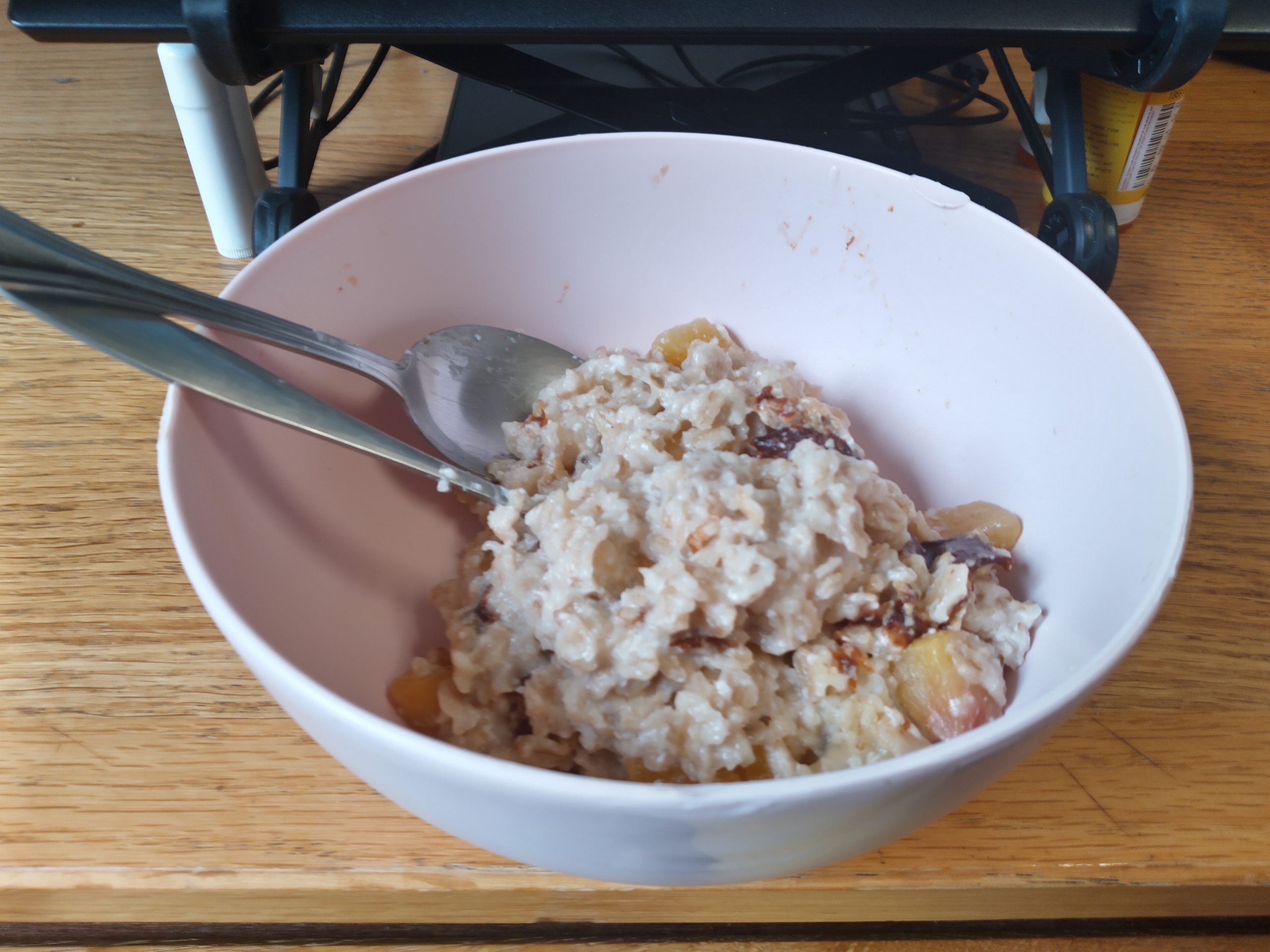 Look, it’s oatmeal. That’s not rice. You can still cook it in a rice cooker. Some other ideas:

Have fun with the rice cooker.