Rise and Grind and Build by Sabrina M. '21

During my hiatus, I spent a lot of time working and soul searching.⁠01 going to therapy I ate toast with peanut butter and banana slices for breakfast every day, packed myself lunch every day for work, and made dinner with my roommates almost daily. I burnt the tips of my fingers soldering, sliced the tip of another with a box cutter, and nicked my nails trying to sand things. I’d like to believe that all of that misfortune made my fingers⁠02 and consequently, me stronger and callused, but sadly they’re still soft and prone to damage.⁠03 lucky me, though, they still healed. so what does that say about my metaphor?

Since high school, I’ve had a lot of experiences with fabrication. For those of you unfamiliar with the term, fabrication is Engineering Speak for making things. It often, but not necessarily, involves using a variety of shop tools,⁠04 things you'd find in a typical machine shop like CNC routers, laser cutters, saws, lathes, sanders, and more. It almost always involves using your hands. My high school was a magnet school that focused on learning different trades, ranging from things like Cosmetology to HVAC to BioChemistry. I studied Architecture for three years (it’s since become a four year program since I left), which involved a lot of fabrication, though we didn’t call it that, then. Every year, we’d make scaled models of our final floor plans⁠05 each year, we'd have one Big Project that we'd present at the end of May in a big Open House that anyone could attend which involved a lot of laser cutting, some 3D printing, and minimal working with wood. That, paired with the Architecture classes I had taken at MIT, gave me a lot of prior experience. So, even though I’d never had a job in tech,⁠06 the summer after my freshman year, i went home and worked at a local pool. i was sad about not having a cool internship like most of my peers, but hey, it seems to have worked out the transition into doing fabrication (with some other things thrown in here and there) full-time wasn’t extremely difficult.

Over the course of roughly a year and a half, I worked at a few different places, MIT (or, more specifically, working under two professors at MIT), Sosolimited, and Nervous System. The time I spent at each was different,⁠07 a few weeks, three months, a year and a half, respectively but the common thread was consistent.

At MIT, I worked under professors Rania Ghosn and El Hadi Jazairy, helping assemble their entry into the 2017 Design Biennial Boston. We worked primarily out of the Architecture department’s Woodshop in Building N51,⁠08 it shares a building with the MIT Museum a huge space with all sorts of tools that’s constantly filled with wood dust. I mostly used the large CNC router to cut out pieces of the project, and tweaked some designs in Rhino.⁠09 the standard 3D modeling software used in the Architecture department In between, we stressed about project budgets and expenses, and I stressed about the rest of my life.

In September, after some of the stress started to settle down, I started a three-month fabrication internship at Sosolimited, a design firm that came out of MIT. Even though my official title was “fabrication intern”, my work was pretty flexible, and I had a fair amount of say when I wanted to explore something new. I did social media research and sat in on team meetings about it, modeled a prototype art sculpture for a client, went around Boston neighborhoods⁠10 i got to ride the Mattapan High Speed Line, which is basically just an antiquated trolley and just took photos of the scenery, all on top of fabrication. Every Tuesday, we had Thai Tuesdays, where we ate (you guessed it!) Thai food, at the same restaurant in Beacon Hill. It was then that I discovered my love for Tom Yum Soup, since every week I could try something new.

A photo of me holding an acrylic rod and checking the holes I’d drilled. 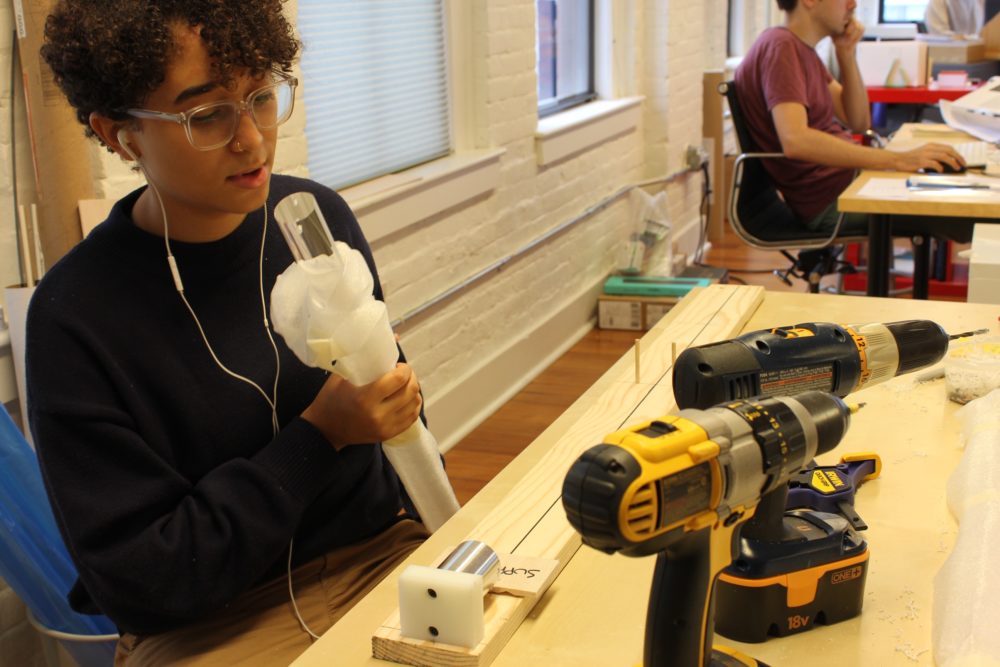 Mostly, I worked on the end stages of some art installations in Boston. For one lighting installation titled Colorspace, I soldered about 100 tiny little circuit boards, crimped, trimmed, and assembled about 90 wires (all at specific, different lengths), and organized hundreds of different parts to get assembled. On the day of our assembly, we slugged boxes of wires, bags of parts, a hundred acrylic rods, and a grocery bag full of snacks to the site and got ready to work. All together, it took about three days of long hours to finish the assembly from start to finish. You can even see me in all the promotional material! And then, I designed and made a small replica of Colorspace for the studio, using the leftover materials. Overall, I had a positive experience, and it felt like a great first “tech-y” job. And occasionally, since I’m a legal adult now, I get invited to their happy hours, almost one year after the fact.

A photo of the replica Colorspace is shown, which has seven lit-up rods suspended at different heights from the ceiling. 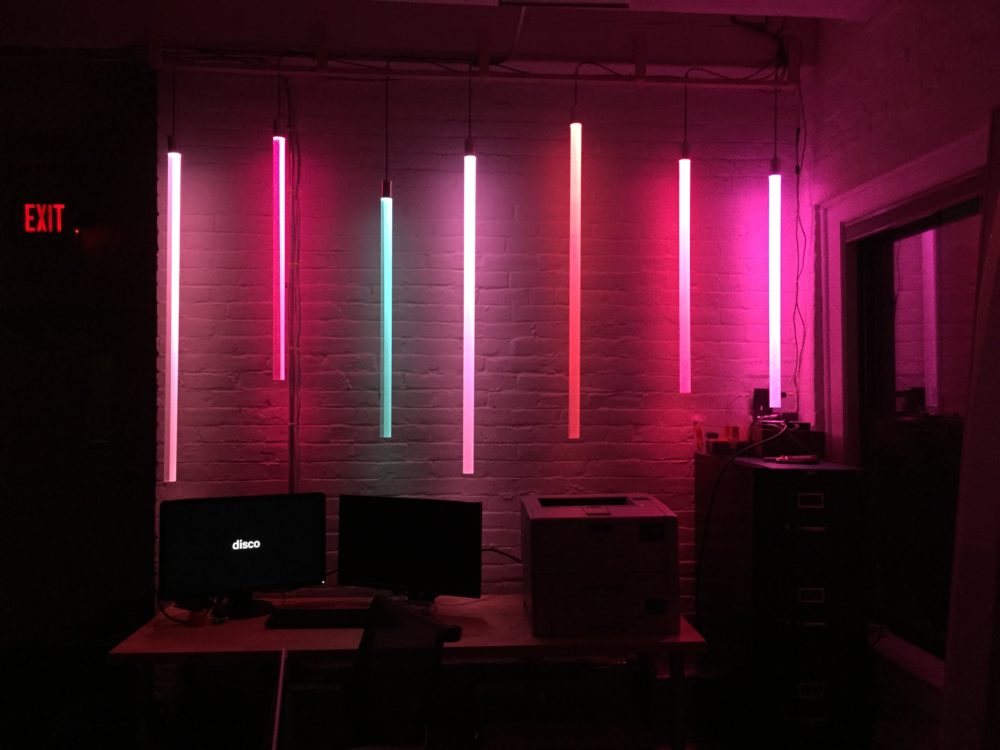 Afterwards, I was hired at Nervous System to help with the overwhelming rush of holiday orders. During those initial weeks, I did a lot of pretty mundane tasks to keep up with the constant flooding of orders being placed. When the studio was quiet, I listened to hours worth of podcasts⁠11 big fan of Reply All and Buzzfeed's Internet Explorer, the latter which is unfortunately no longer active while I worked. Sometimes, we played music out loud to keep us motivated through the slog, including this song, which became our official holiday theme music:

A music video for Queen’s “Don’t Stop Me Now” is embedded.

As soon as the wave had died down (around mid-January), and we finally caught up with the backlog, I began to branch out to other projects. I did some prototyping of a pin table, which is exactly what it sounds like, a table or board with a whole bunch of pins sticking out of the top. The idea is used a bit in laser cutting already, and the point of it is to minimize the surface of the Laser Bed,⁠12 basically, the part of the machine that your materials lie on in order to minimize points where the laser hits the bed. Why does it matter, you ask? At points where the laser hits the bed directly, you often get a flashback, which can cause the material to have little nicks along cuts, or cause an ugly burn on the bottom surface. So, I set out to try to minimize that. Unfortunately, I couldn’t quite get an end design that would work better than their current system, so the idea was scrapped.

Shortly after, I became the Laser Master. The Laser Room was my domain, where I had near unfettered control of our laser cutters all day long. For a while, there were only two, named Milky Way and Agate.⁠13 aptly named after the two puzzles that were released when they were purchased, the Galaxy puzzle and Geode, respectively Then, mid-Summer, there was a third, which I named Pangaea after our new Earth puzzle. I spent most of my time with them in the small room, cutting constantly to maximize my efficiency, and I always came home smelling like burnt wood. I learned a lot about laser cutters during that time, maintaining not just them, but also the ventilation systems in place to help them run. With three cutters and months of optimizing, the next holiday season that came by felt like a breeze, comparatively.

I also worked on various other projects during the inbetweens. For some time, I standardized models of different rings, tweaking sizes and proportions in Blender⁠14 another 3D modeling software, but free and open source and Rhino. I finally learned how to use Grasshopper,⁠15 a visual programming plugin for Rhino that allows you to make designs based on parameter inputs and I designed some new puzzle prototypes using it. I dabbled in party planning, including a holiday White Elephant,⁠16 i ended up with a starbucks gift card, which i used exclusively on cake pops and chai lattes, since i don't actually drink coffee and a final Going Away Party before the company packed up and left to Upstate New York. I did a dozen other small tasks that were a bit less important.⁠17 making jigs, fixing puzzles, assembling jewelry, building shelves, and other similar things And sometimes, inbetween the inbetweens, we didn’t work. Sometimes we’d get ice cream nearby in Inman Square or in Union Square, or play Mario Tennis, or try to solve one of our own puzzles, or go to the Museum of Science. It was interesting, being a part of a single company for such an extended period of time, and something I had never experienced. I got to be there to see projects begin from just an idea and end at a result, and be a part of that process. That feeling is particularly satisfying. Although, I do still panic when I see a stray puzzle piece on the floor.⁠18 a puzzle maker's worst nightmare, and it usually involves counting boxes and boxes of puzzles until you find the one with one less piece. 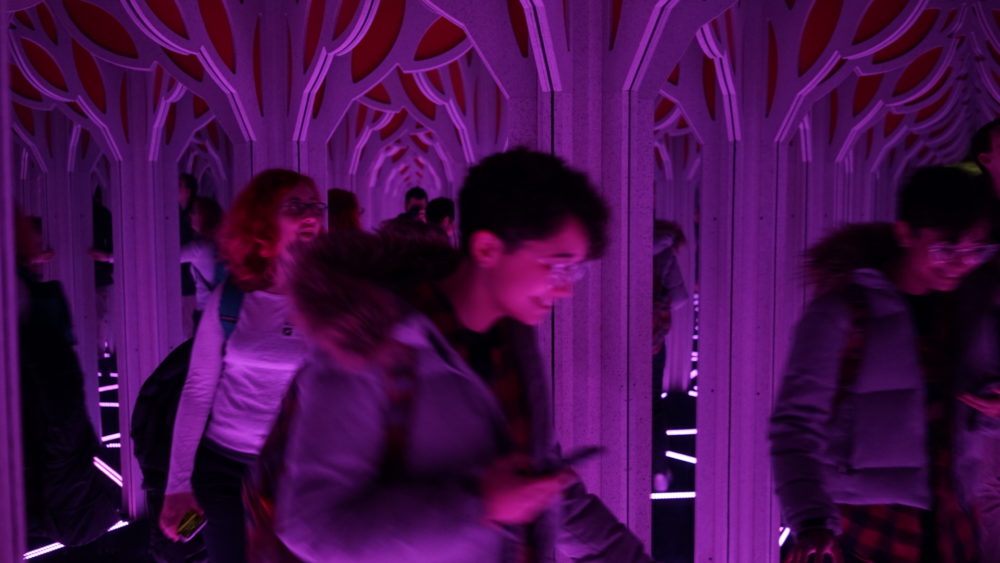 fun times at the museum of science

A photo of me at the Museum of Science is shown. I’m in the Mirror Maze, so my reflection is shown multiple times.

Being a full-time employee was an interesting experience, and to be honest, one I’m not sure I’m used to, even after nearly two years. Most days, I loved that I could come home and just do whatever without having to worry about doing assignments. Other days, I lamented the rigidity and longed for spontaneity. I missed weekday matinee shows, and going to museums when it wasn’t busy, and being generally anywhere without it being too crowded. I’m still deciding what I want to do later in life, and luckily I have the time to do that. Figuring out that balance is something I hope to figure out, with more experience under my belt. But for now, it’s back to the life of a student.