IAP is almost over! I wasn’t on campus for most of it, but I finally returned to Next House last week in time for UPOP’s week-long training workshop, which is about to come to a close. I had a wonderful experience, and it was a lot more fun than I expected it to be! I might blog about it in another post, but for now, I wanted to give a small room tour!

I live in room 251, which means I live on the second floor. More specifically, I live in 2 East, or 2E for short. 2E is like a family to me, and I would give a shoutout to every single one who lives on 2E right now, but I’d take up an entire blog post just for that, so maybe another time. <3 I will give a shoutout to my roommates Caleb R. and Cory L. (both 2020s) thought because relevant. Anyway, here’s the room~ 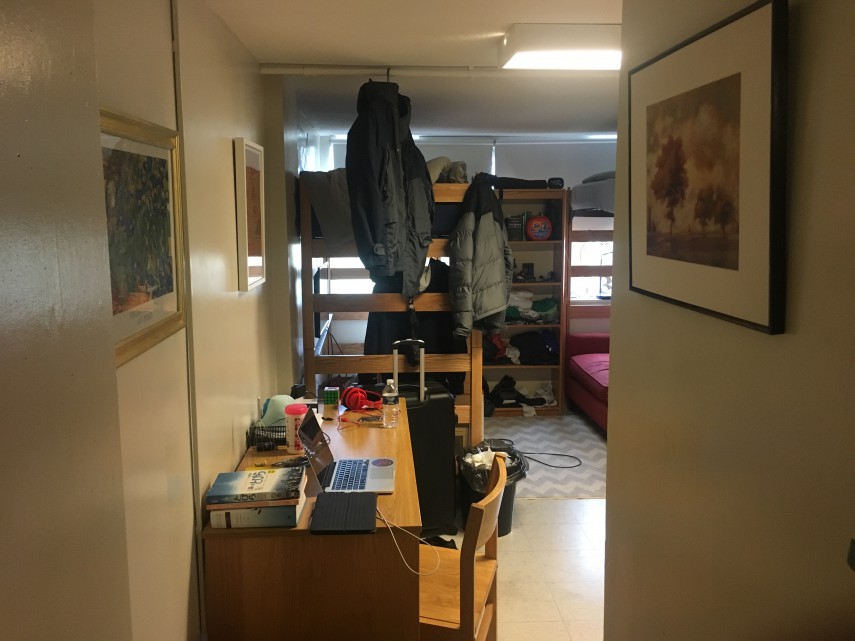 the view when you first walk in the room

There are only two closets in the room, so I hang my heavy winter clothes in a more… creative way. There’s a pipe that runs along the ceiling that I use to hang coats and other clothes sometimes, and I hang a lot of stuff on my bedpost. There’s also a lot of artwork and posters all over our room. Like, a lot. 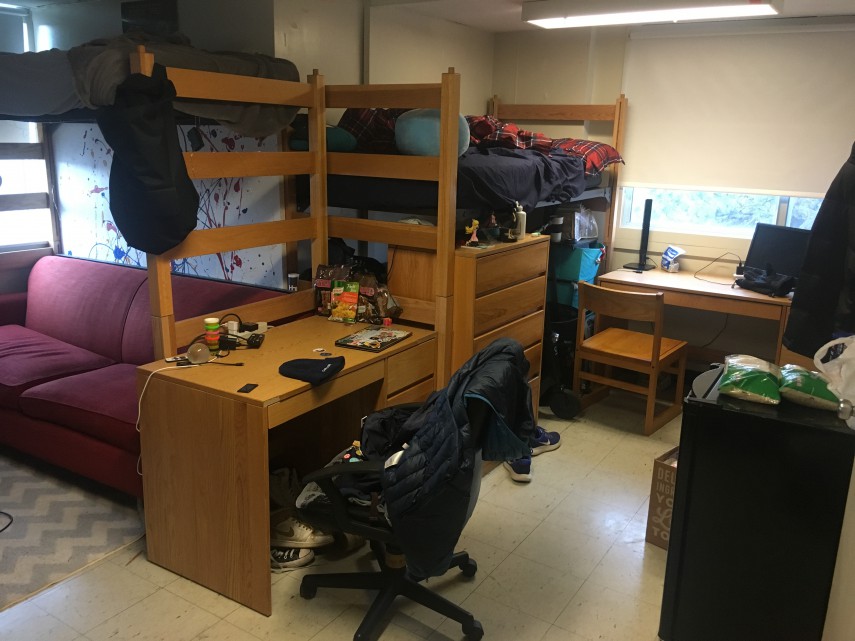 On the right corner of Caleb’s bed, there’s a lot of ramen. That is the designated communal food section. All three of us can take from that corner whenever we like. Counter-intuitively, even though I have the biggest desk, it’s Caleb’s desk’s real estate that’s being used…

Q: Caleb, what hobbies and activities are you into?

A: I like playing video games, like Smash and Breath of the Wild. I like doing audio engineering stuff, which is why I’m on the animation group. What else do I do… I like designing outfits. And helping other people picking out outfits. (Caleb has like, a dozen pairs of shoes.) Oh, and also hanging out with friends.

Q: Cory, what hobbies and activities are you into?

Well, it looks like Cory’s not in Next House right now, but being his roommate, I can definitely talk a little about what Cory’s into: he’s Course 6-3, and likes to program lots of things. He’s Next House’s tech chair, which is a pretty big deal. He, along with several other 2E people, built a music player web app for 2E’s main lounge, and it looks amazing. (I’m not giving the link out to the public because it’d get spammed pretty quickly.) He’s into learning Japanese: he went to teach English to Japanese schoolkids last summer. He’s also a highly-ranked osu! player.

Back to the tour: we have a kickass Jackson Pollock-esque painting that’s leaned against the wall. The wall was not actually splattered. (I wish Next House allowed that… :c) We also, by an act of God, got a really nice sofa that fits perfectly. 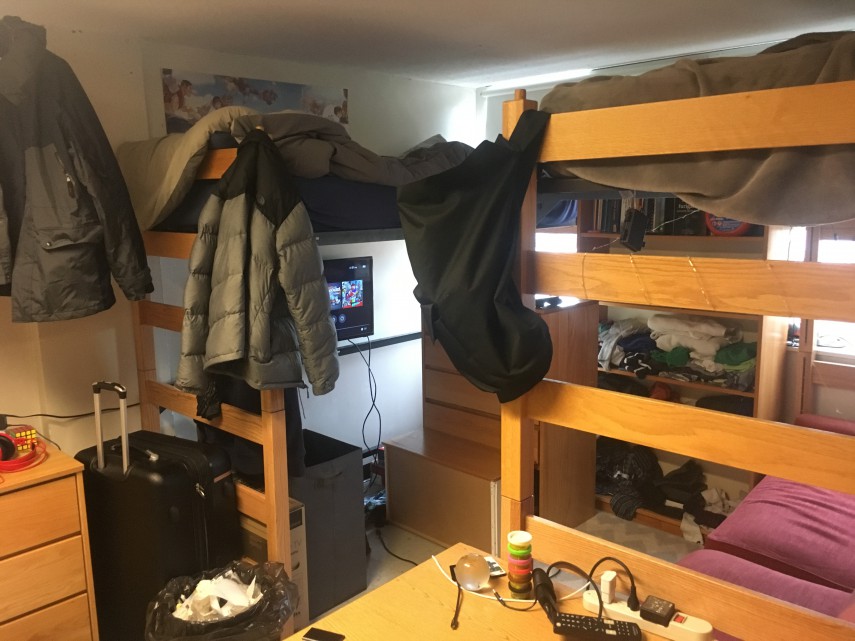 my bed, left: to the right of my bed is my half-bookshelf, half-closet. the drawers are actually mostly caleb’s stuff

As you may have noticed by now, all our beds are lofted. This allowed us to use a ton of more space in the room. A TV is against the wall underneath my bed, which is why the sofa is on the other side under Caleb’s bed. We have a Switch, too. :)

I get into my bed by climbing on the small bench-looking thing in front of the drawer, then climbing on top of the drawer, then into my bed. You might be thinking, “How does Caleb get into bed?” I asked him, and he said he puts his right foot on the wooden beam that you can see just in front of his desk, then pulling himself up. It’s a lot harder than how I get into bed, to be honest.

The springed bedframe has lots of possible spaces to hook hangers, so I hang a lot of clothes below my bed this way as well, especially towels. The small wooden bench is actually the bottom shelf on the drawer removed. These two choices of lifestyle is largely inspired by Allan K. who was my neighbor in East Campus last year and also the most wonderful human being you have ever met. 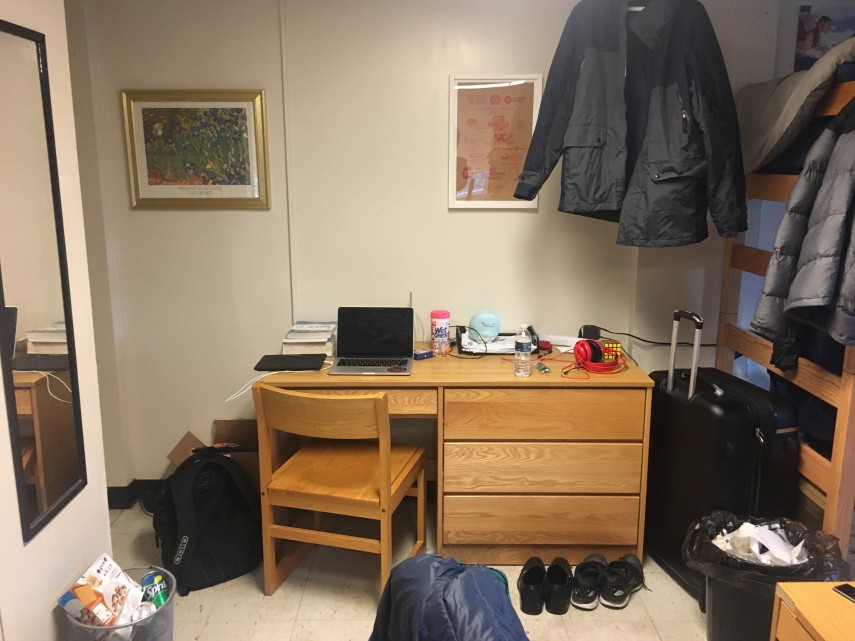 On my desk are several things: on the left corner is CLRS, the algorithms/computer science bible, and Tobira stacked on top of it, a Japanese textbook. I’ve been studying Japanese for a little over a year now, and although I haven’t taken an official class, I’m really serious about learning. It’s also been a lot more doable to self-study since a lot of 2E friends are also learning/speaking Japanese. :)

The little plushie is Womp. He is a dinosaur. Womp. 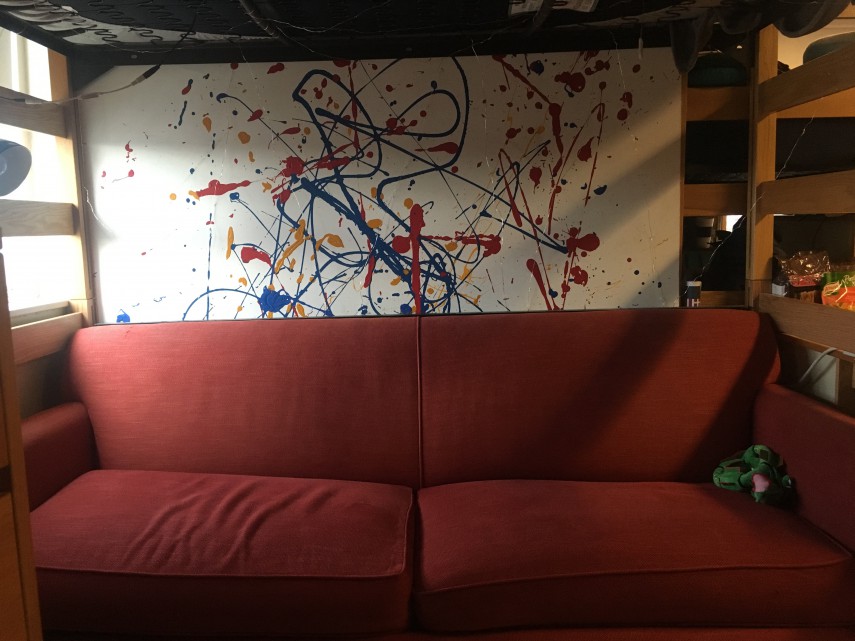 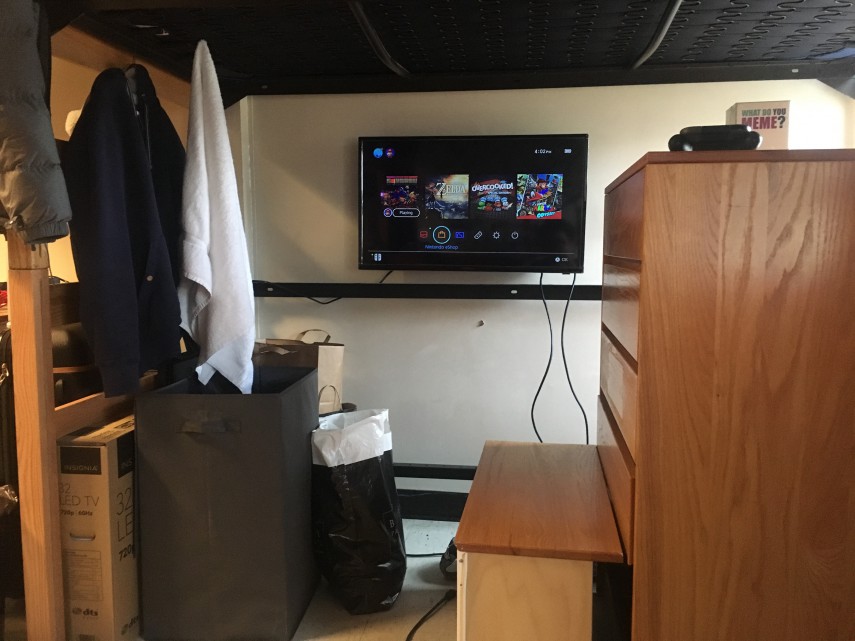 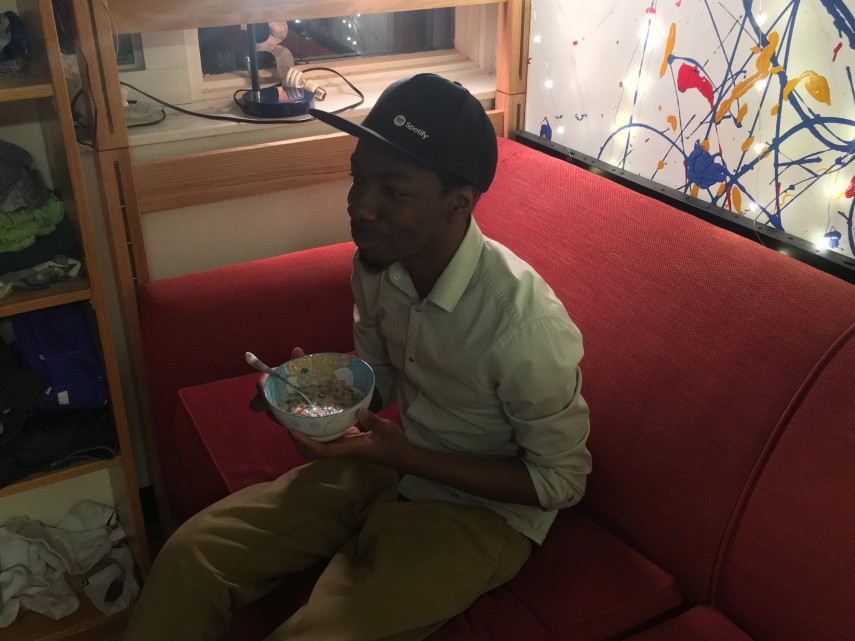 caleb richardson, the man, the legend himself

And that sums up the room tour! It’s nice to be blogging again. :) 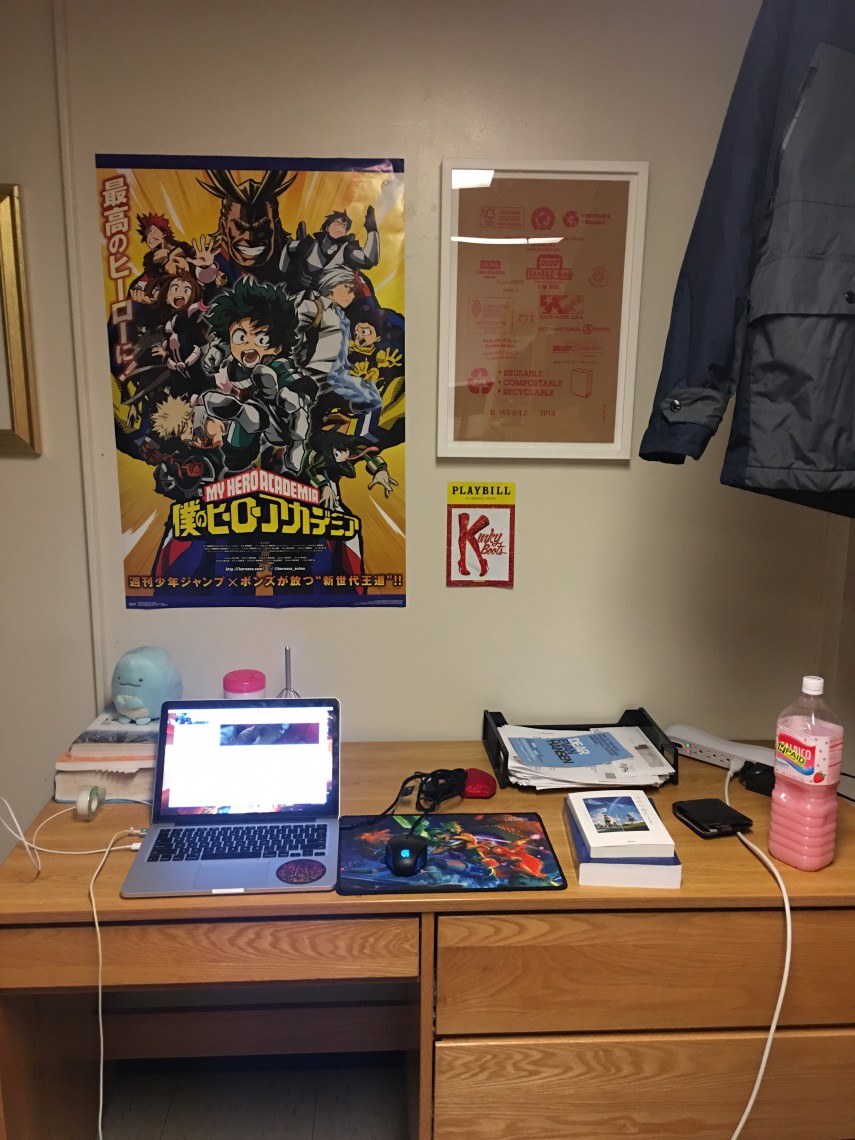 bonus picture: what my room looks like, one week later. cube is gone, calpico is here, your name in korean, and my autographed league of legends mousepad that i got during the na lcs finals in td garden