MISTI paid for all the MIT Japan interns to meet up this weekend in Kyoto. My stomach is still full.

As this whole trip has been an experience in pushing our cultural boundaries, our first challenge was to visit an onsen together, which is basically just a giant public bath. Essentially the idea is, “welcome to Kyoto; in order to get the free tour and food you’ll all have to hang out naked together for a little while. But don’t worry! You get to squat under one of those spigot things, then all get in a giant tub together. The water is scaldingly hot and then you have to dump ice cold water on yourself.”

Needless to say, we all enjoyed the experience immensely, and then went to get dressed in opposite corners of the room.

We then piled onto a giant bus with a similar-sized group of Japanese students, most of whom were studying English and were comp sci students of Mike Barker, a previous MIT employee and our guide for the weekend. A microphone was passed around, and we were forced to introduce ourselves in our non-native language, which produced such gems as “I want to enjoy this tour!” and “Yorushoku” (intended to be “Yoroshiku”; Please take care of me; but instead “Yorushoku”; dinner). Luckily we reached our first temple before it got to the back of the bus and I got to keep my dignity.

Our first stop was Kinkakuji, the Golden Temple. 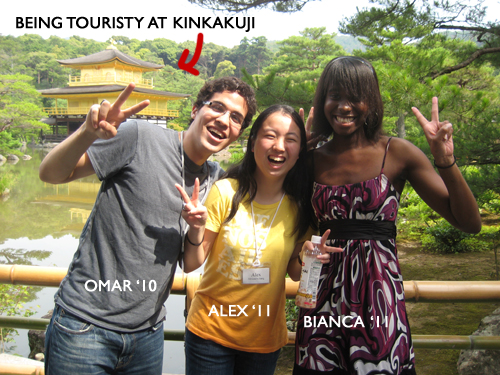 As the first Zen Buddhist temple out of several we had to visit that day, we pretty much zoomed through the grounds, while practicing our lackluster Japanese next to the lustrous temple. We did, however, stop to make a few wishes: 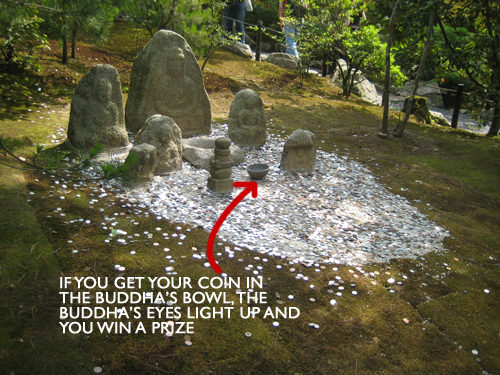 Our second temple of the day was Daitokuji, which featured several rock gardens with giant rocks that were supposed to represent waterfalls and manatees. (You have to kind of tilt your head at something like a 270 degree angle, but eventually you’ll see it.) Then we hit up our first Shinto shrine, Heian jingu, as Buddhism and Shintoism are the prominent religions featured side-by-side in Japanese culture. The shrine at Heian jingu was almost entirely garishly red, set beside a lush green garden filled with lotus flowers and weeping willows – sort of an Amelie color scheme meets Memoirs of a Geisha. 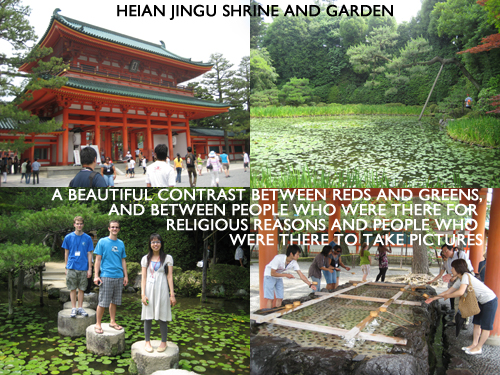 </center >
My favorite temple of that day, however, was definitely Kiyomizudera. I’d been to it four years ago, but coming back felt surprisingly different after having lived in Tokyo for a month, where there is little greenery and everything feels somewhat cramped. The temple is built out in the open air, next to a tree-covered mountain – maybe “tree-inundated mountain” is a better phrase – that’s so majestic it’s hard not to let your breath get taken away. (Or maybe that’s just because you have to hike up a hill to get there.)

Even still, I loved it, especially because that hill was lined with little shops giving away free samples of yatsuhashi, or triangle-shaped mochi with different flavorings and fillings. (The original flavoring, I’m told, was just a cinammon filling, but now I think they’re channeling Bertie Bott’s Every Flavor Beans because they have all sorts of different combinations such as red bean, green tea, peach, blueberry, mango, strawberry chocolate, Ramune, mud, boogers, chicken feet.. maybe not chicken feet; we’re in Japan, not China..) 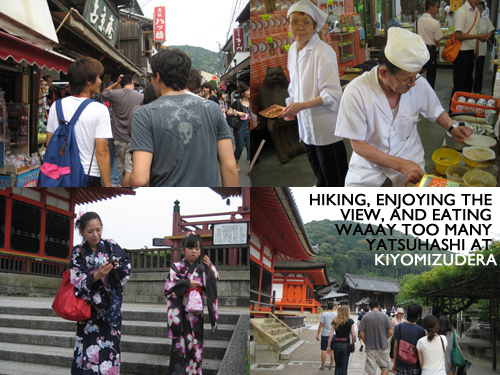 After our long day of hiking and sightseeing, we headed back to our bus, where we learned Japanese children’s songs as we drove an hour to Nara. (Fun fact: the Japanese onomatopoeia for rain is “pichi pichi, chappu chappu, ran ran ran.” Another fun fact: they do not like it so much if you yell this while banging on the table at Japanese restaurants.) 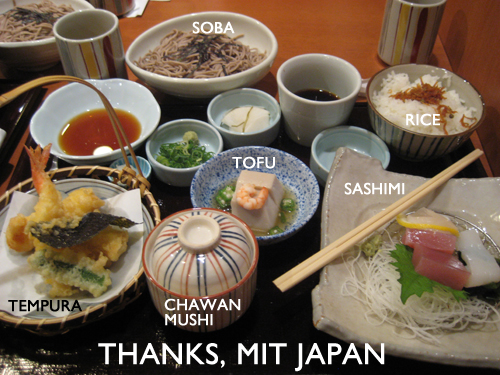 We ended the evening by going out to karaoke and singing a lot of Japanese songs, which mostly consisted of the Japanese kids singing and the rest of us jumping up and down on the couches banging on tambourines like crazy people. (The Japanese also do not like this so much.) The next morning, we hit up Todaiji: 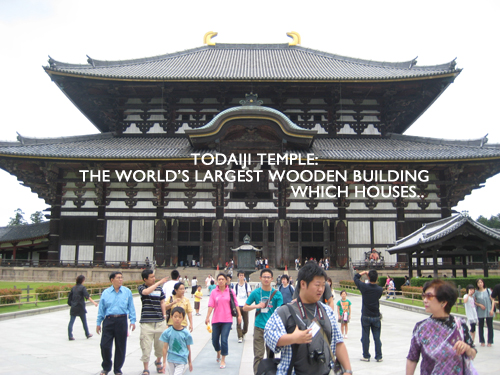 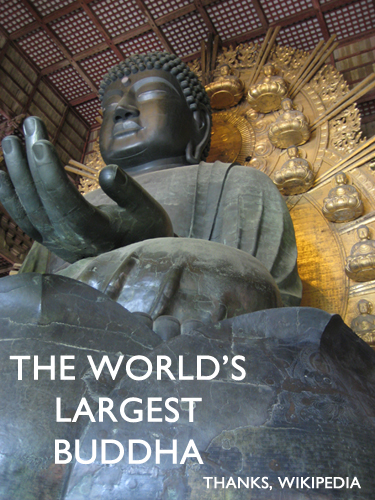 I’d also been to Todaiji four years ago, but coming back was especially exciting because of the tame deer. The deer will let you pet and photograph them (but to preempt further questions, particularly by my friend Steph, I imagine riding would be difficult and possibly fatal). Several of the vendors outside of the temple sell packets of deer biscuits, so a good number of people bought some (and were subsequently mauled by herds of hungry deer). 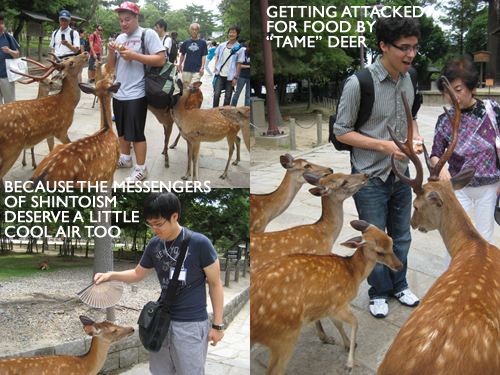 Todaiji’s family-friendy vibe continues with the Buddha’s Nostril, a hole cut into a wooden column purportedly the size of the giant Buddha statue’s nose hole. If you’re able to crawl through the nostril, you’ll supposedly have good luck for seven years. Eager to soak in all the good fortune we could get, our huge line of shouting foreigners (most of whom were a good deal larger than the average Japanese person) attracted a little bit of a crowd, but we were for the most part succesful: 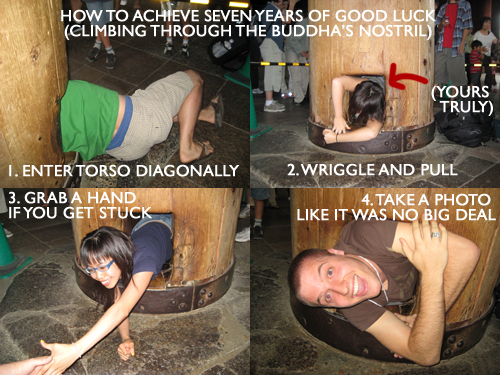 (I kind of think we wore the wood down to the point that the hole became a good deal larger than the actual Buddha’s nostril, but people with broad shoulders deserve seven years of good luck too, right?)

We left Todaiji and headed for our last lunch together, at an okonomiyaki restaurant. Okonomiyaki, also known as Japanese pancakes, literally means “whatever you want, grilled”, and comes with any variety of toppings from squid to soba, from mochi to kimchi. It’s really freaking delicious. It was also probably the first filling meal I’d had in Japan, since everything here is SO tiny, but it feels like okonomiyaki gets into your stomach and and expands like a Chia pet. A tasty Chia pet. 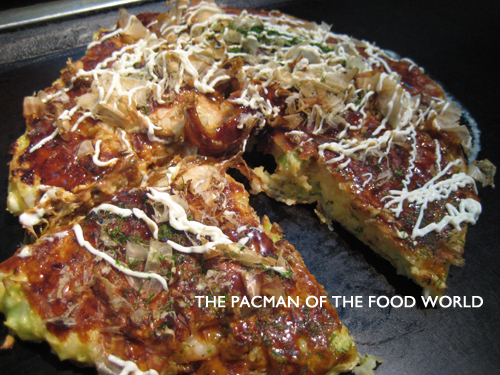 Exhausted and weighed down by the extra ten pounds in our stomachs, we dragged our dusty selves back to the train to Kyoto, where we relaxed for a short while before our shinkansen (bullet train) back to Tokyo. Kyoto Station, by the way, is one of the largest buildings in Japan, and from the top you can see Kyoto Tower in its full glory, surrounded by the bustling city, shrouded by the same tree-covered mountains next to Kiyomizudera. As we looked over the city someone commented that they hadn’t even noticed the city was surrounded by mountains, a marked difference from the modern capital of Japan. 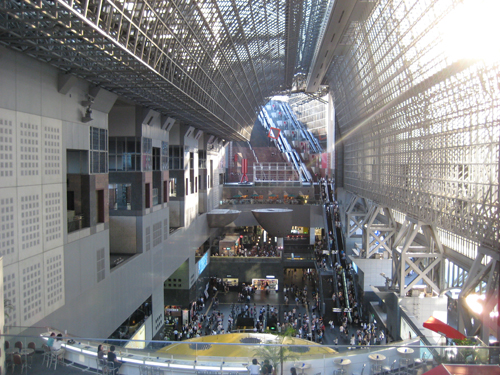 We stolled lazily back to the shinkansen platform, but not before stopping on a landing to take in the beauty of Kyoto Station at sunset. With full bellies and seven years of good luck ahead of us, we boarded the train back to Tokyo.

Coming up: the world’s best sushi! And fish uterus. I know I’m excited.