Sewing minus the machine by Anelise N. '19

I’m taking a somewhat lighter course load this semester. I signed up for the header software design class that assigns 15-hour-per-week psets, so I decided to compensate by only taking two technicals and two HASSes. One of my HASS classes is in French IV, which I was frightened into taking after realizing how bad my French was while studying in Europe this IAP. (My French is still pretty bad, but it’s getting better!)

My other class is something not typically associated with MIT–costume design.

Everyone at MIT is required to take one “HASS-A”, or “arts” class as part of the humanities requirement. Qualifying subjects range from music to theater to painting to game design–you name it.

I even found a HASS that matches my artistic outlet of choice–sewing! 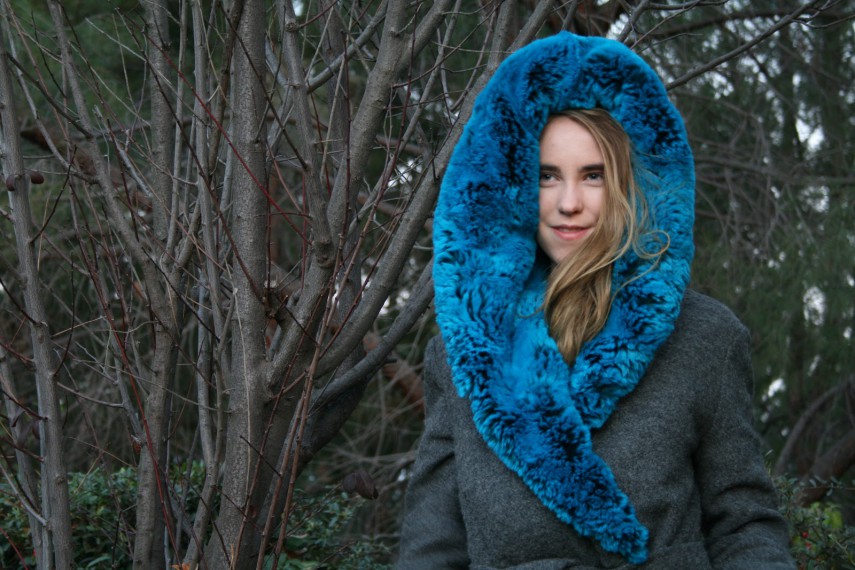 My now most famous work: the fuzzy turquoise caterpillar.

I’ve been sewing since the beginning of high school, but I mostly design and sew clothes for myself. If you had asked me at the start of the semester what I hoped this class would be like, I would probably have said “free sewing study hall”, with maybe some pattern drafting thrown in. What the class has ended up being is some text analysis, a lot of dramaturgical interpretation, a ton of sketching, and even more watercoloring. In short, it was nothing I had hoped for and everything else.

And yet…or maybe because of that, I’m enjoying it much more than I thought I would.

The first or second day of class, my teacher, who is a professional costume designer in New York(!), said something along the lines of “Clothing is characterization. Costumes are never neutral–even the smallest little detail tells you something about the person who put them on. Costumes tell you just by looking at someone who they are.”

That resounded with me, because that’s why I love to sew. Making your own clothing is so empowering because it lets you communicate your identity and your personality instantly. It’s such a raw art form because it’s a direct self-reflection by the wearer (and/or creator)–you can use symbolism and imagery to sculpt yourself. (Once, I got so excited about the potential of sewing that I wrote an admissions essay comparing Harvard to a fabric store. I thought that was a flattering comparison…apparently they didn’t agree ;) ).

But I’m learning that making costumes requires a lot more careful thought than making an outfit for personal use. Instead of designing for one person, you’re designing for a lot of different interests. You’re trying to build a visual identity for someone onstage, so you have to act like every detail has symbolic significance. You’re designing for a specific era and setting, so your symbolism has to work within the practical and historical framework of the story. And you’re designing for an audience, so your choices have to be clear enough that they convey the character, and sometimes even the plot, to the viewers. On top of that, you’re designing for actors, which means you need to give some thought to how people are going to get into and out of their garments.

For instance, right now we’re working with an absurdist play where each actor morphs between up to four different characters (onstage), the time range of the costumes spans a millenia, and the whole denoument of the plot rests on a visual costume transformation. Interpreting and outfitting that definitely involves more thinking-through than deciding to make some crazy pants.

The first play we looked as a class was a libretto by Bertolt Brecht called “The Seven Deadly Sins”. It follows a poor girl from Louisiana named Anna over the course of seven years as she moves through seven cities, trying to make her way as a dancer/actress to send home money to her family. Though it was written in the 1930s, we were free to set the play in whatever time period we wanted. I chose the 1870s, because I thought the developmental tension the United States was undergoing at the time–Reconstruction was still going on, we’re entering the era of industrial innovation and dirty-rich robber barons, and the western seaboard was just starting to boom–was an apt external backdrop for Anna’s internal struggles with familial duty, social status, and capitalist morality. It was actually an interesting play to work with because it presented a lot of material, but at the same time left a lot of room for interpretation–my classmates set Anna in the 20s, 60s, 2100s, modern day–one of our interpretations even saw Anna as a drag queen.

Before designing anything, we collect visual research to solidify the story we’re trying to tell, which means finding pictoral likenesses of our characters and fascimilies or inspiration for the clothing we want them to wear. When you’ve got a very specific demographic or silhouette you’re looking for, this is surprisingly hard! 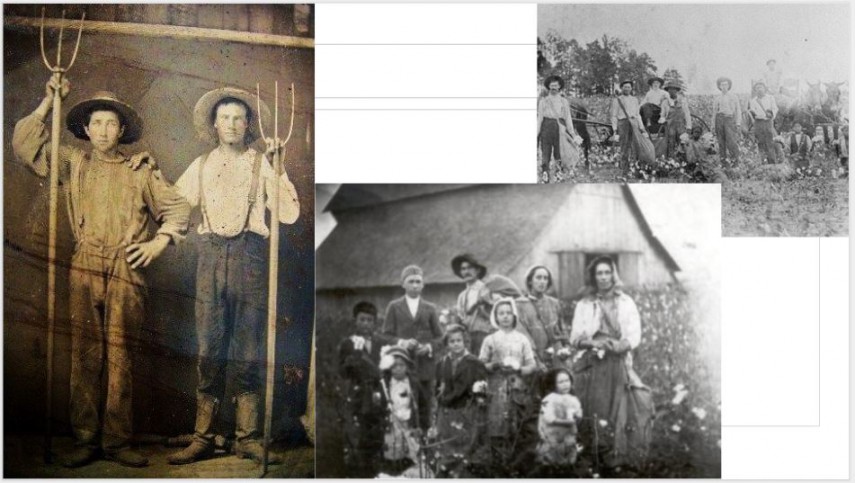 I’ve spent a lot of time recently scouring the web for pictures of poor white tenant farmers in Louisiana ca 1870. 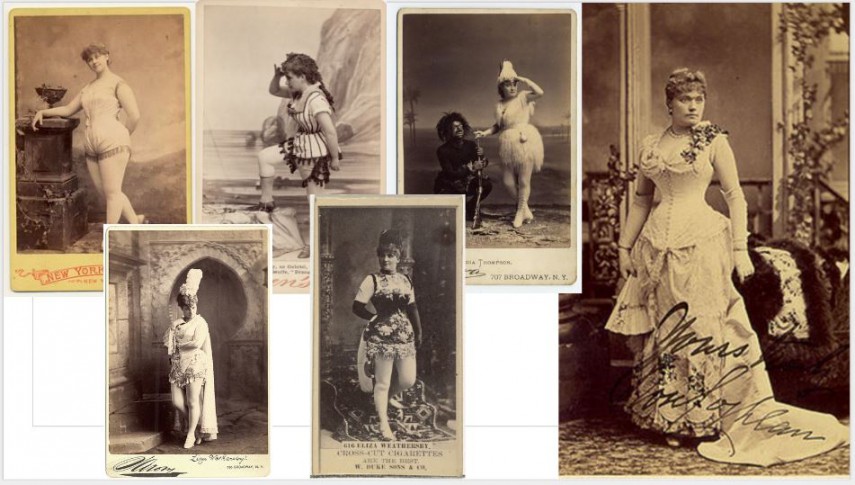 “Burlesque” dancers from the late 19th century. At the time, burlesque dancers were more like risqué actresses. The big scandal was that sometimes, instead of the giant bustles of the time, they just wore tights. 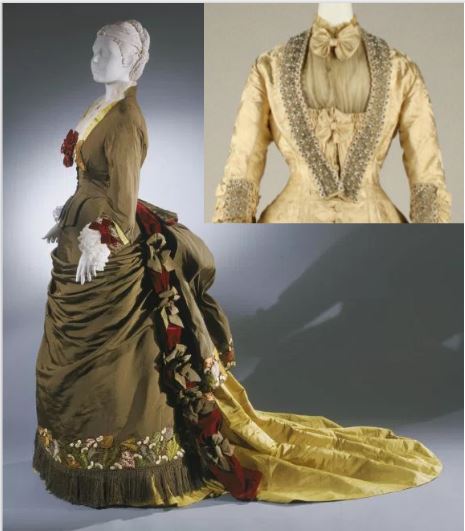 Some ornate dresses from the 1870s…beautiful but astounding–can you imagine sitting down in that skirt?

Then, after you have some idea what you want your clothes to look like, time to find those patterns and whip out the sewing machine!

Just to be clear, the prospect of drawing a human body intimidates. the. you-know-what out of me. I don’t even remember the last time I drew a stick figure. I don’t think the teacher realized how bad I was at drawing, because before our first figure-drawing assignment, she gave us literally NO people-drawing instruction. I basically went into this exercise ready and willing to fail, and predictably, my first attempt was sort of pathetic.

Fortunately, my teacher ultimately spent a class going over figure-drawing with us and demanded from the get-go lifelike, well-styled people…and to my surprise, by the end of the class, I ended up with something that looked like a human being!

Over the next week, our assignment was to complete sketches for the rest of the costumes in our production. I made seven more sketches. Here are some of the ones I worked on. 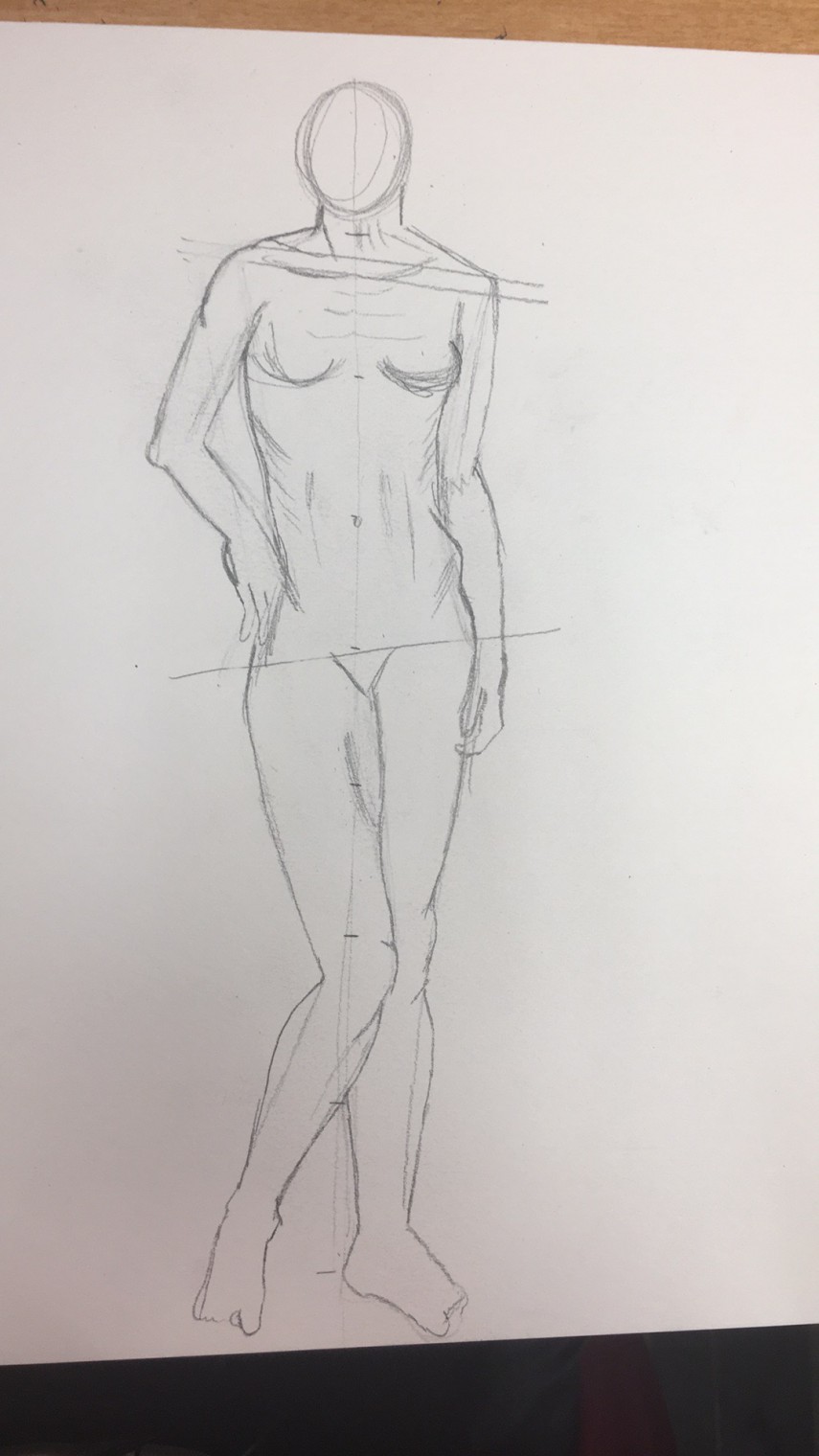 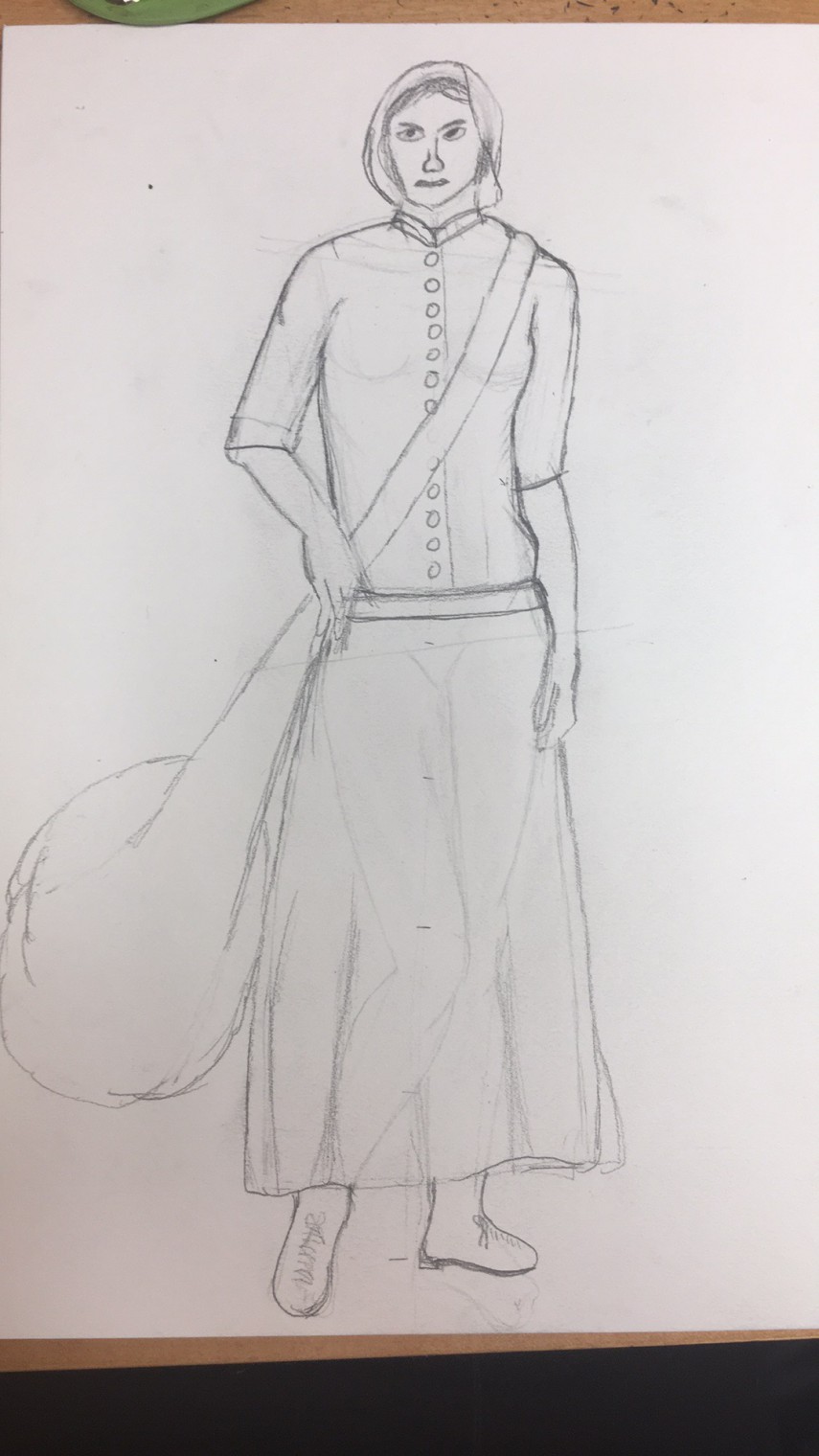 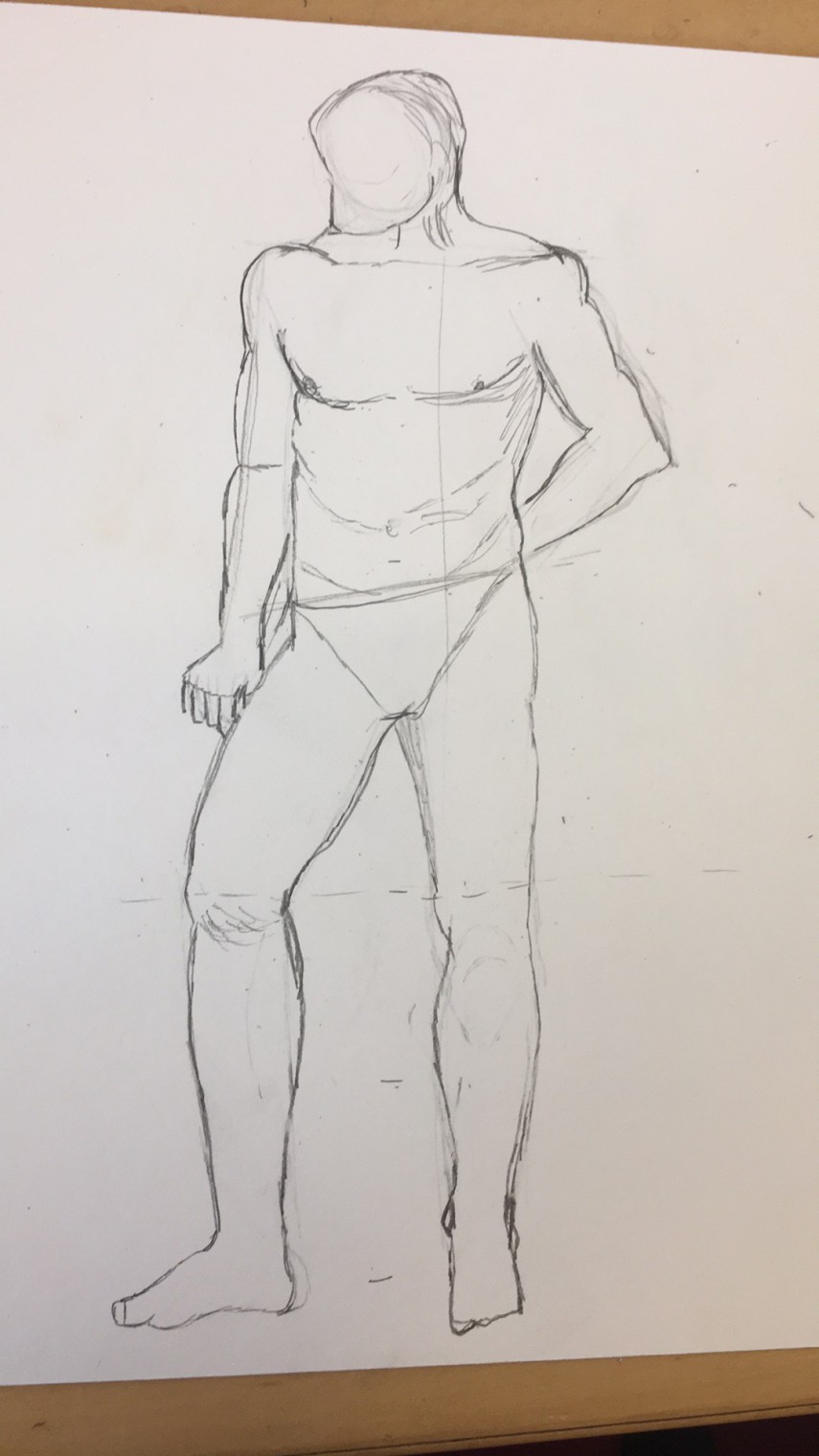 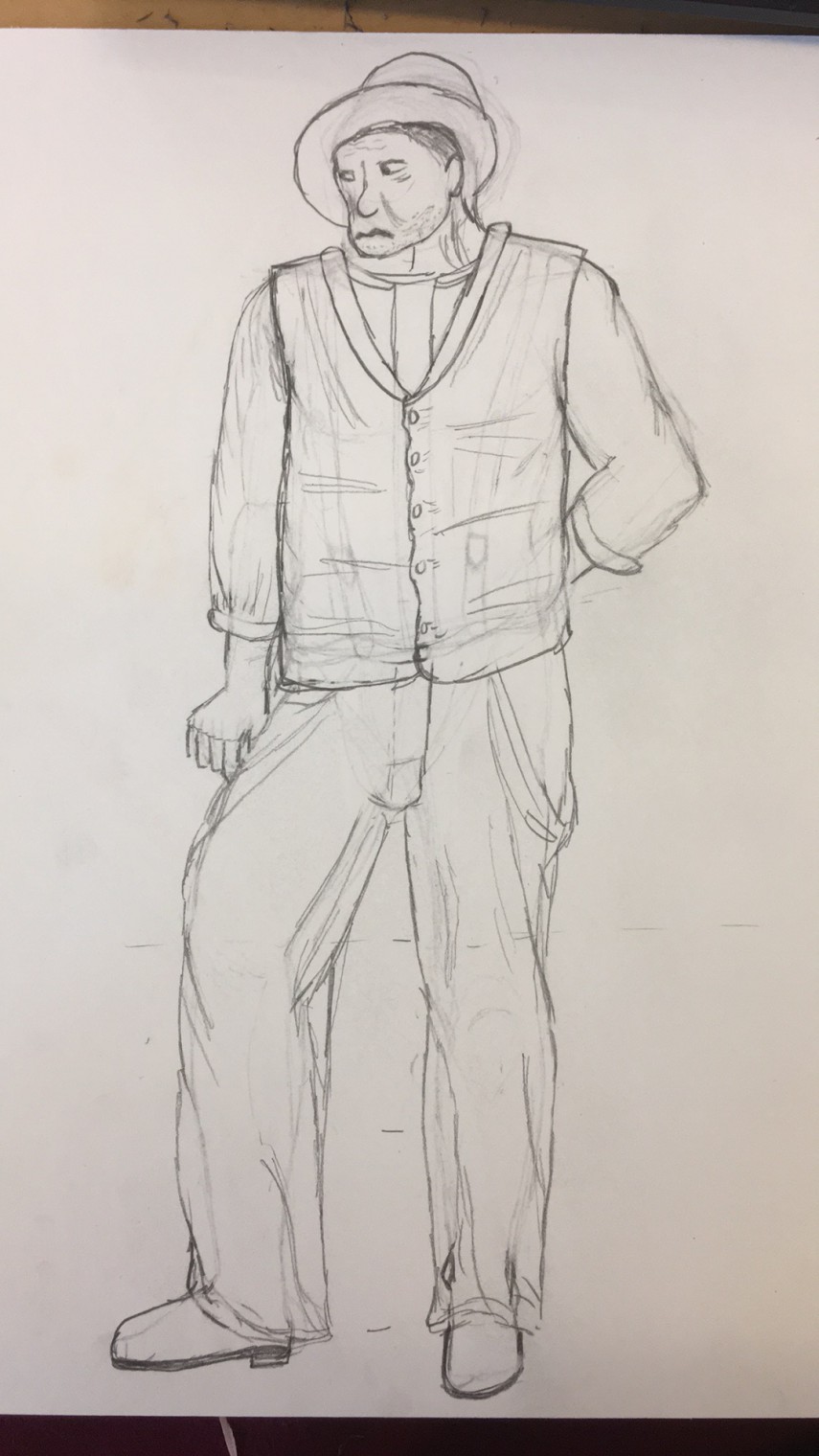 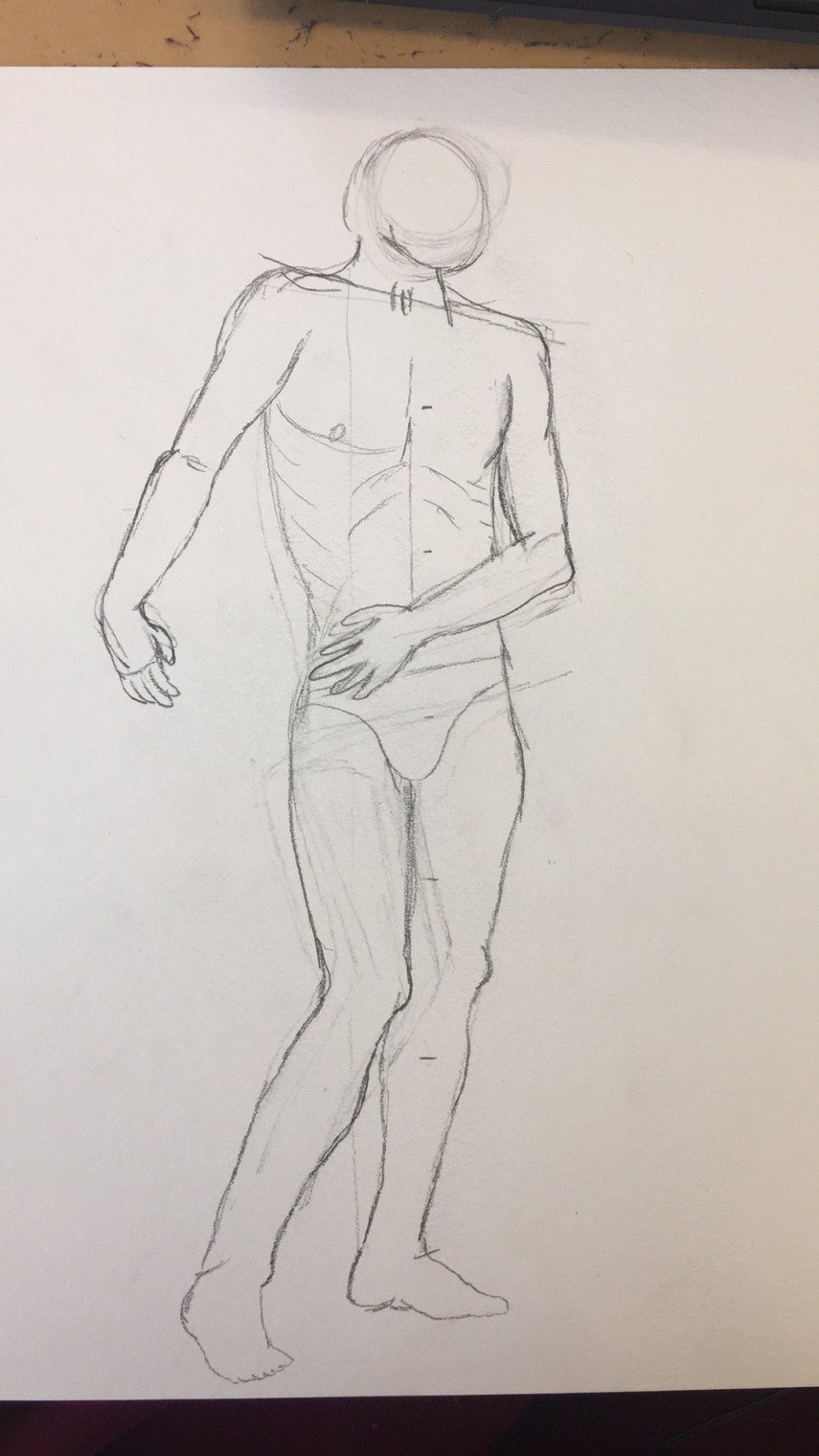 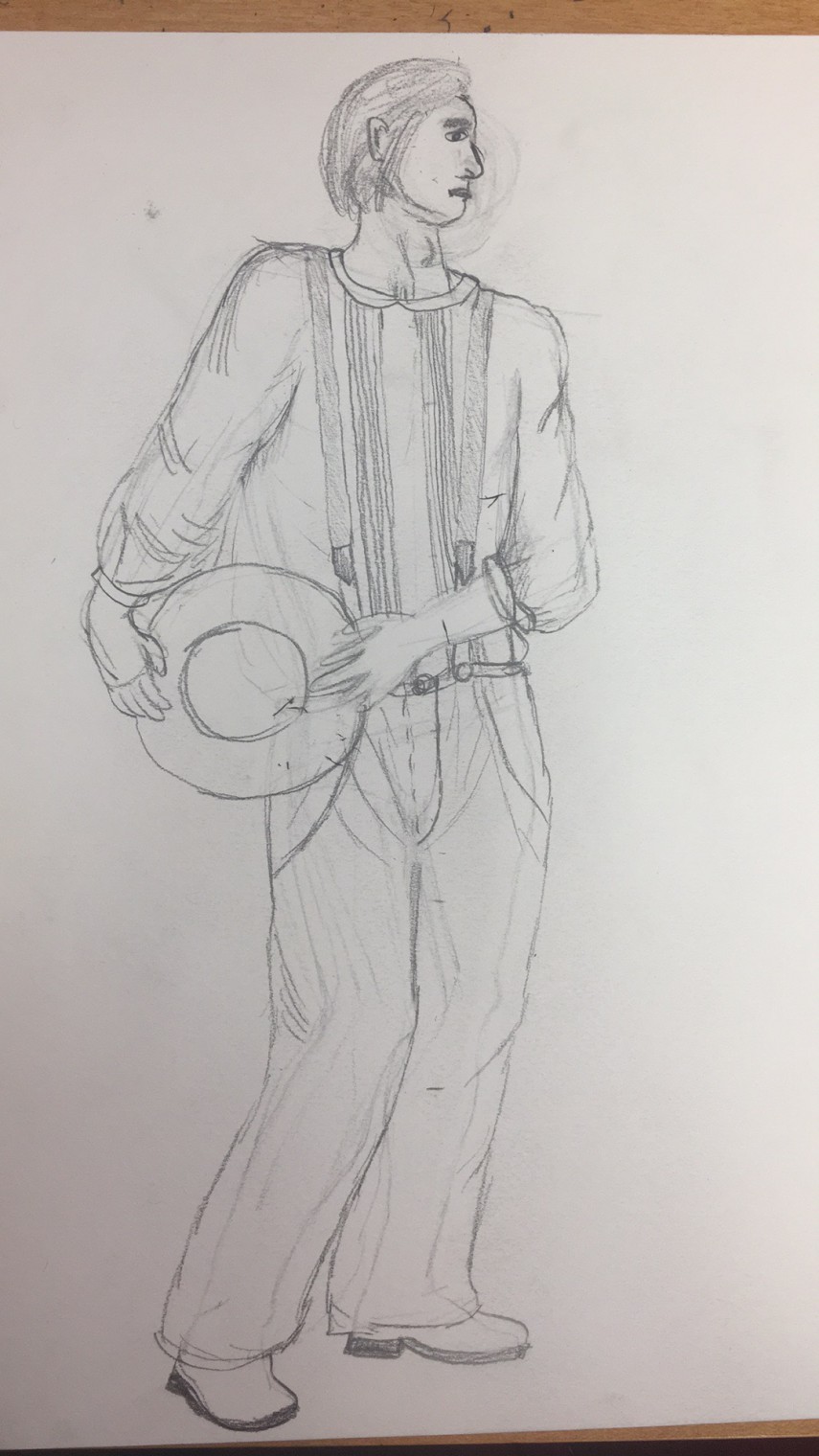 For each person, you draw their body as realistically as possible, and then draw the clothing over their body.

When I brought these in to demonstrate for the class the next week, I definitely won the most-improved award, which was no great compliment to my final artwork, but is still pretty cool. I’m pretty darn proud of them–they’re a huge personal best for me!

Last week was watercoloring week. (Again) we got no watercolor instruction…but at least this time I was a little more inspired to put in an honest effort. I spent five hours painting on Sunday. Here’s what I came out with: 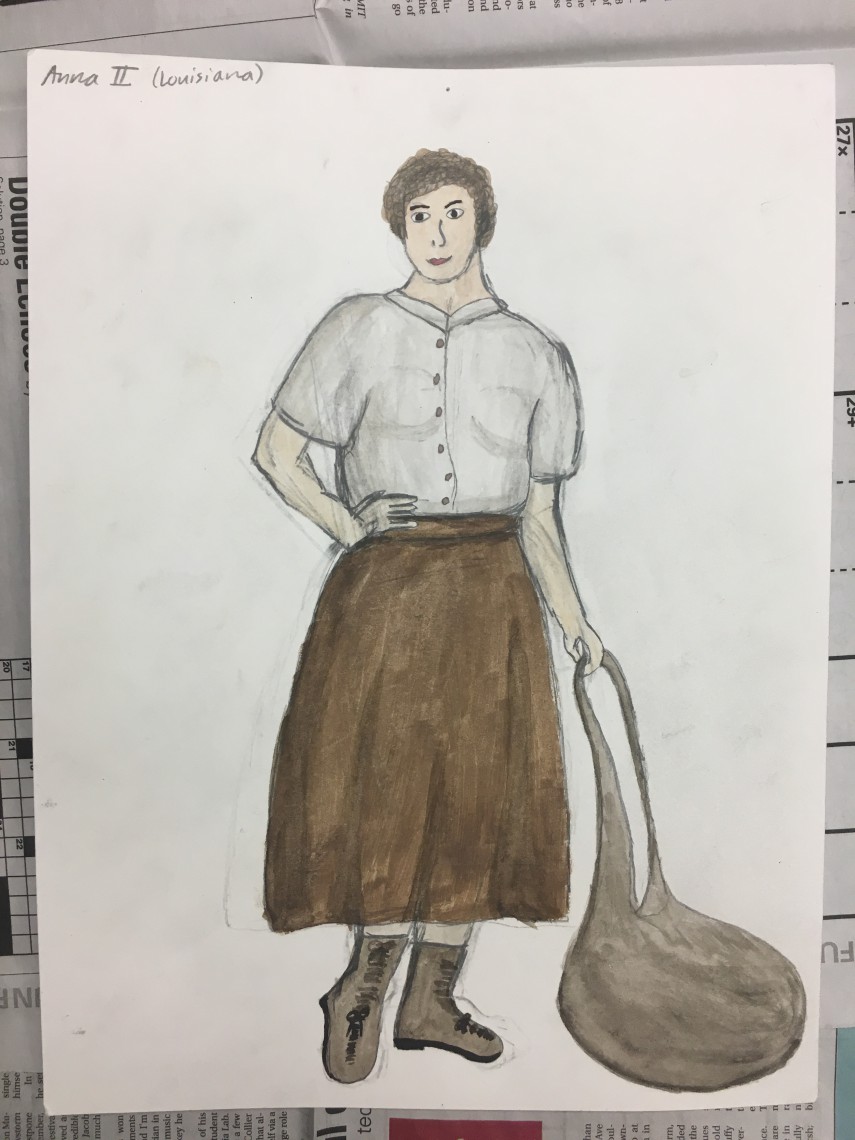 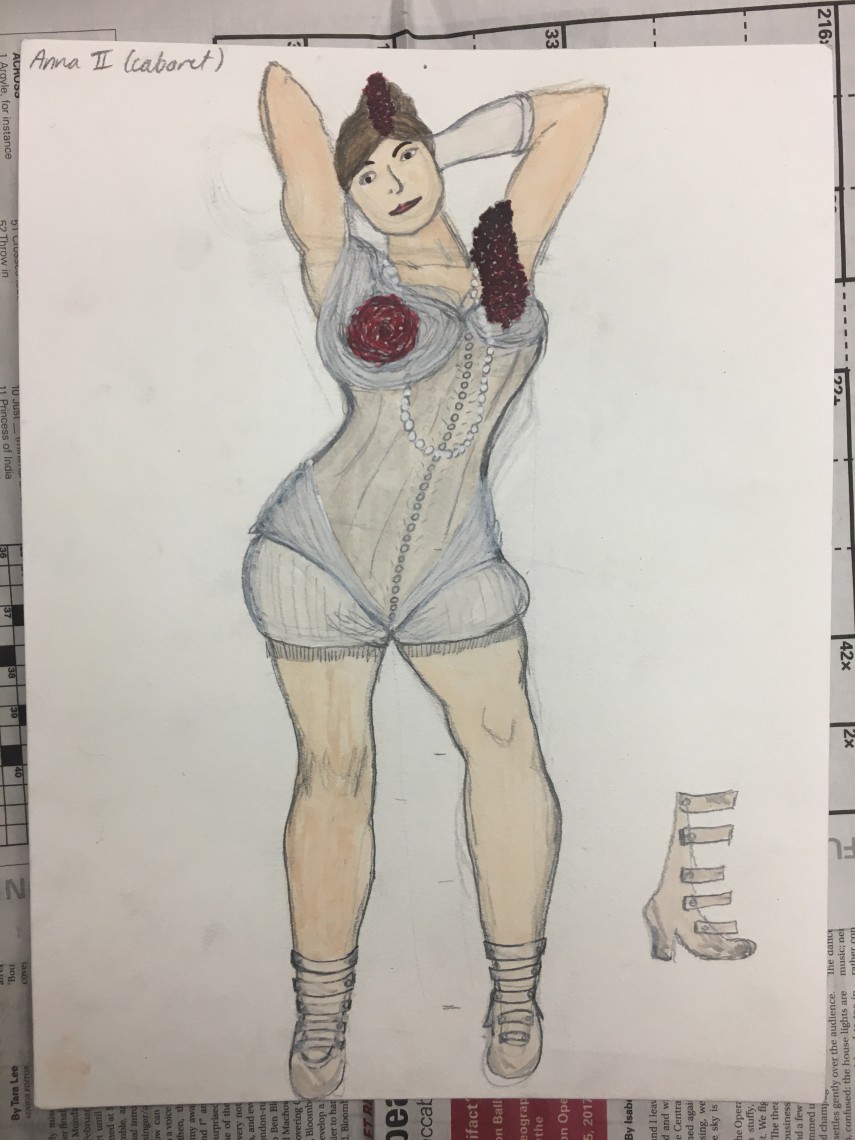 Including her stint as a cabaret dancer. 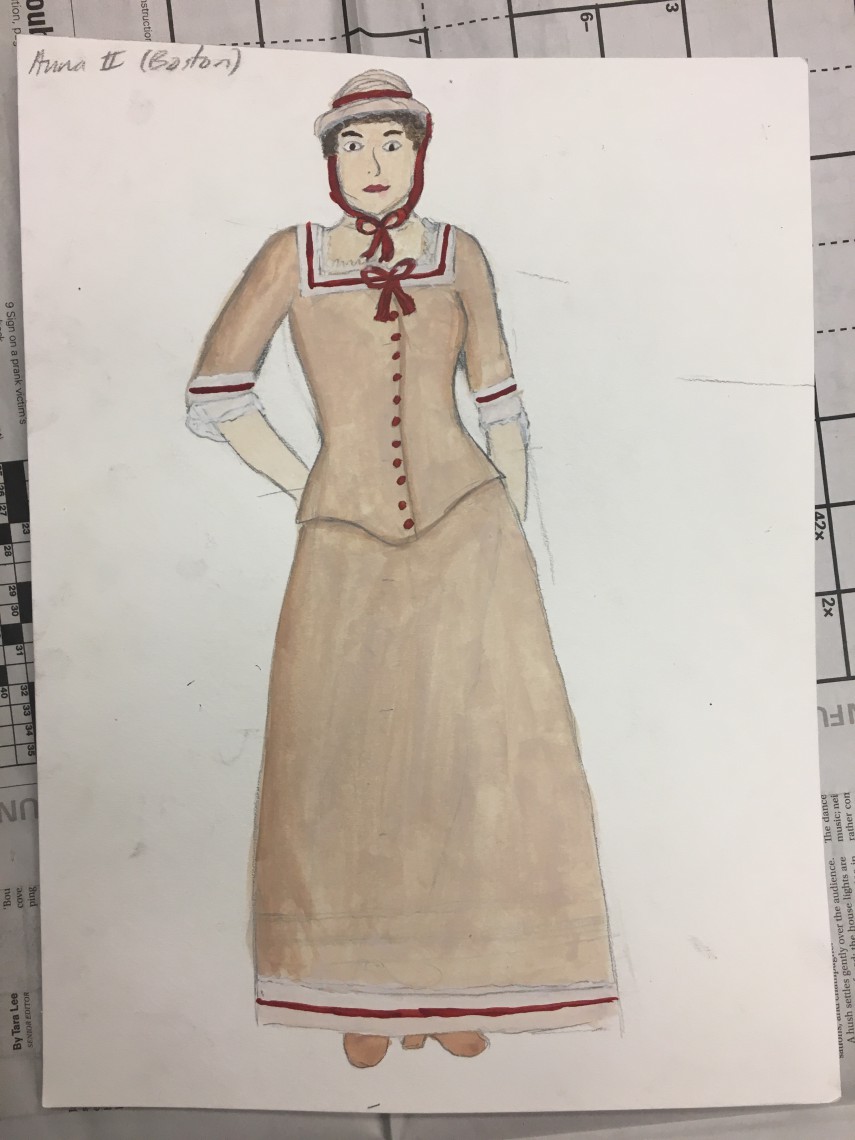 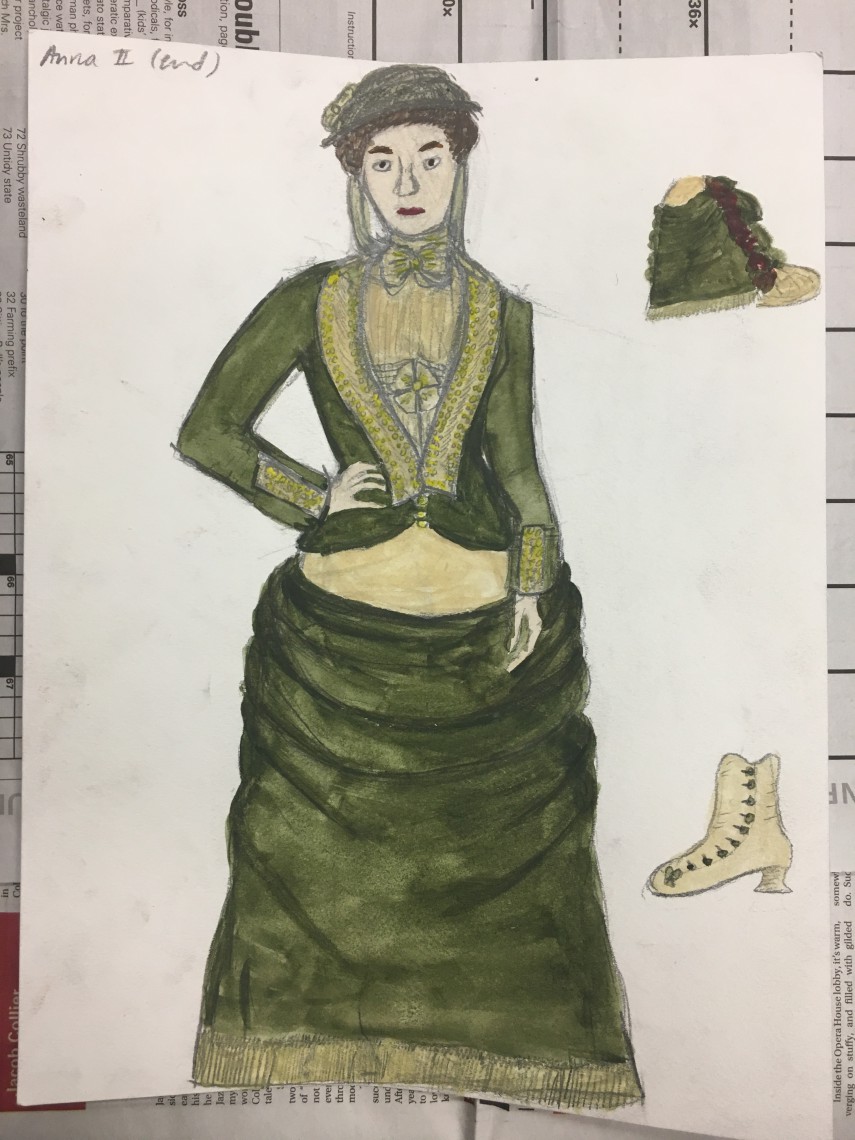 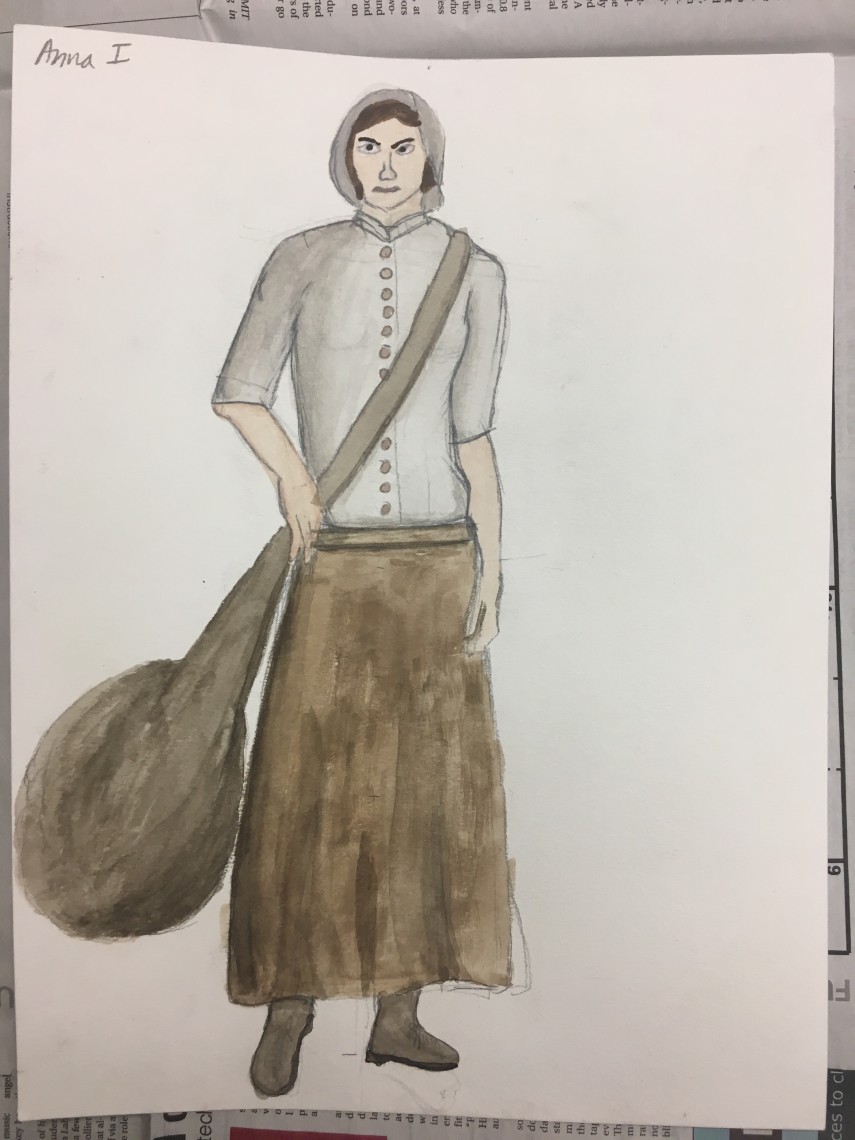 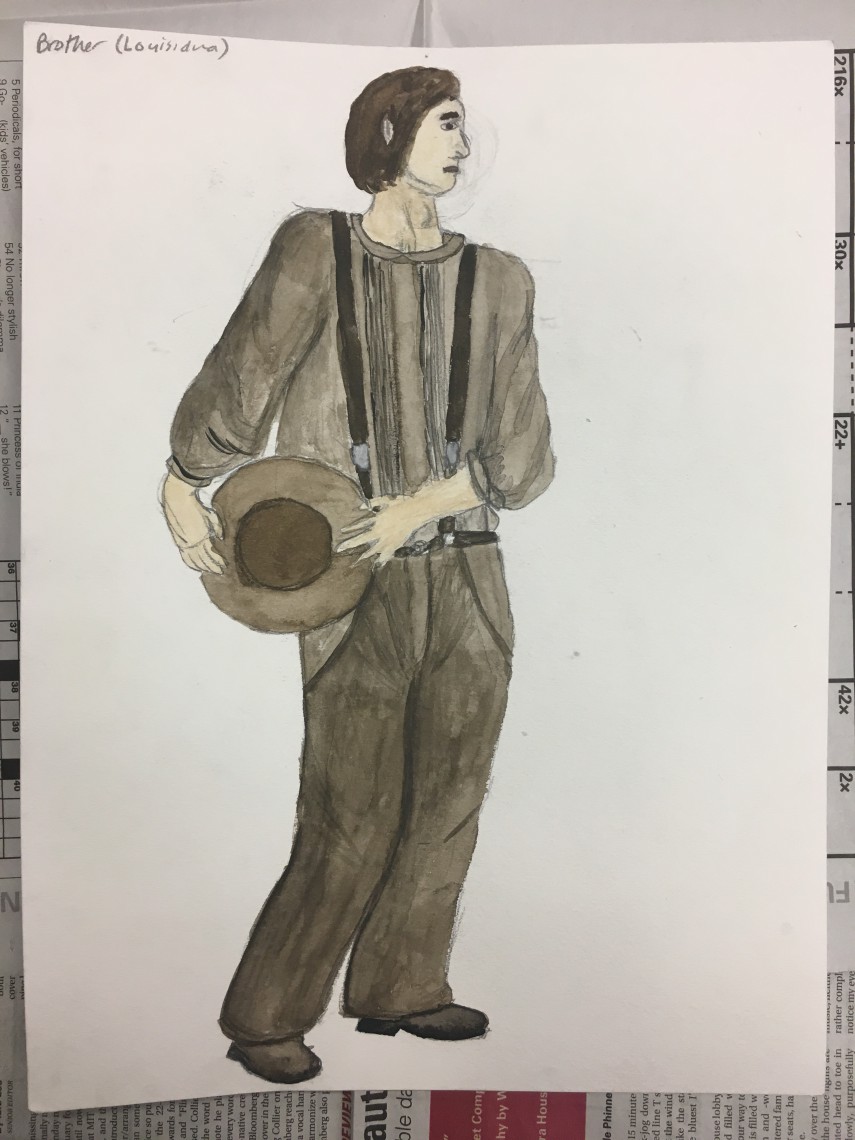 We also portrayed some of Anna’s relatives 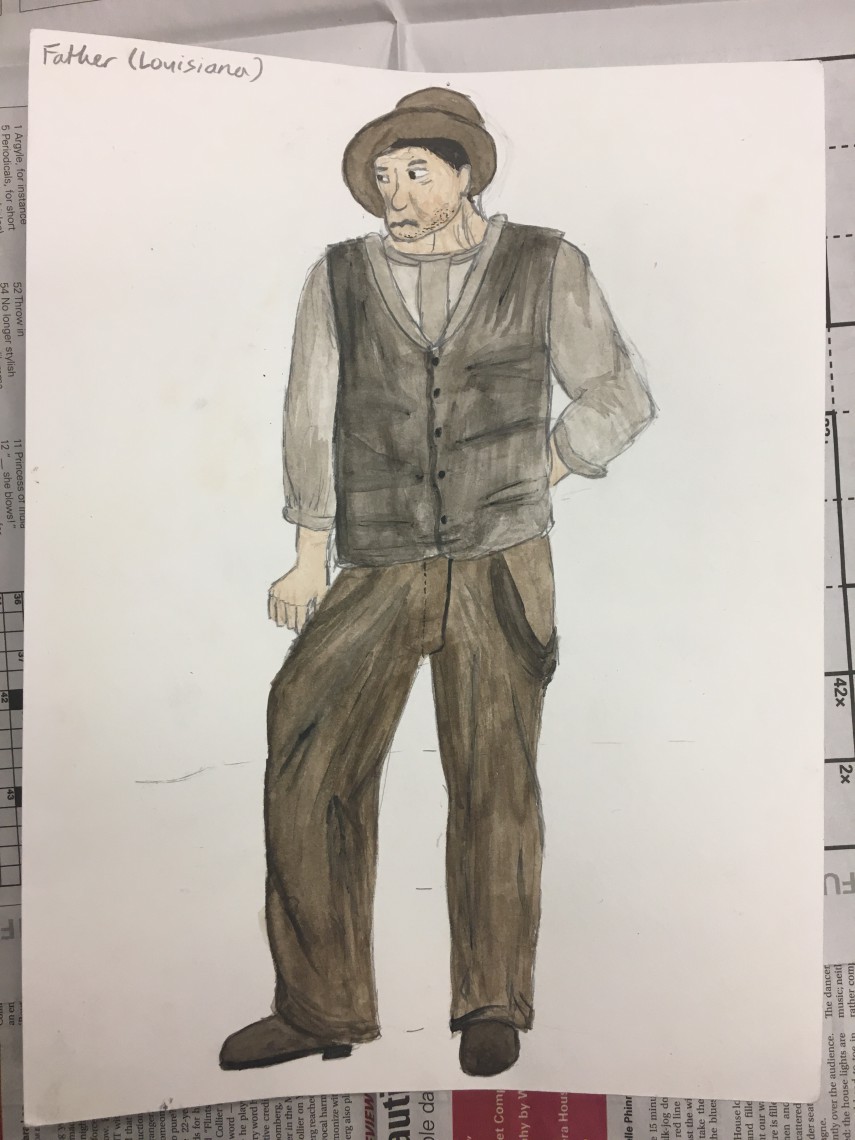 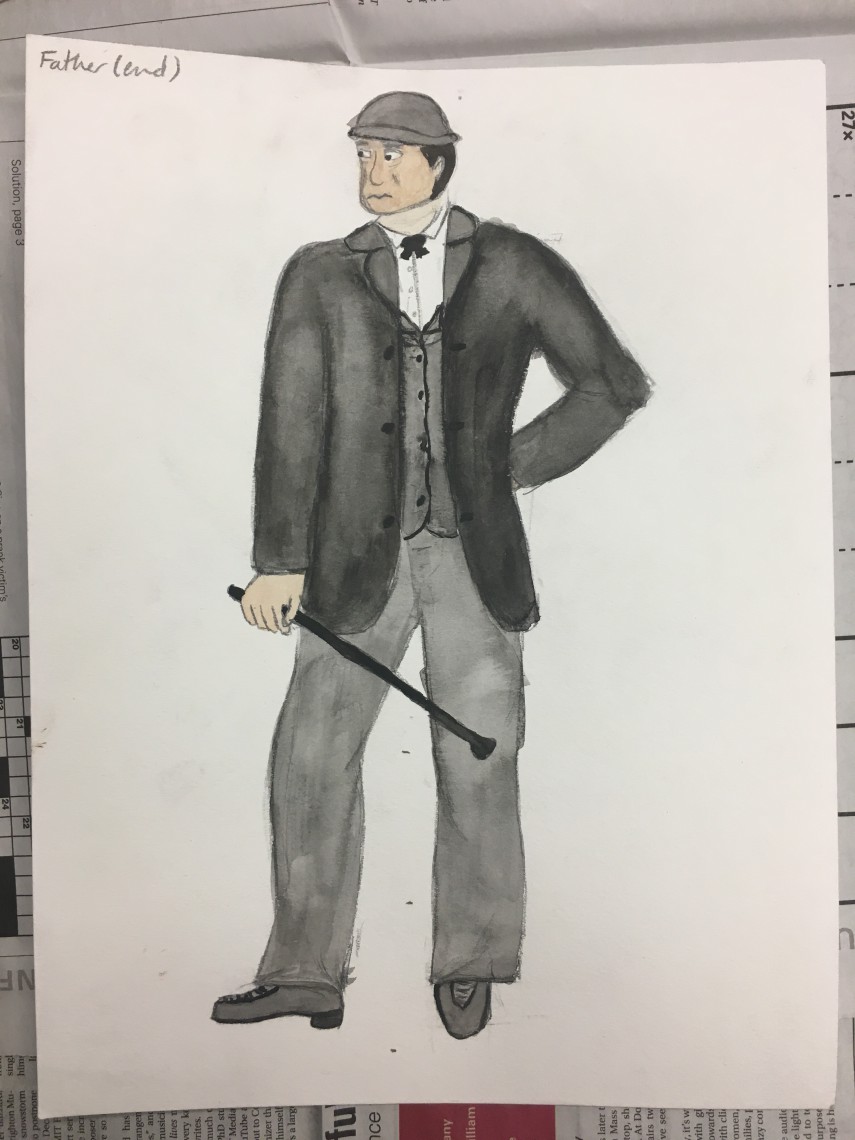 And their transition to eventual wealth through Anna’s earnings. 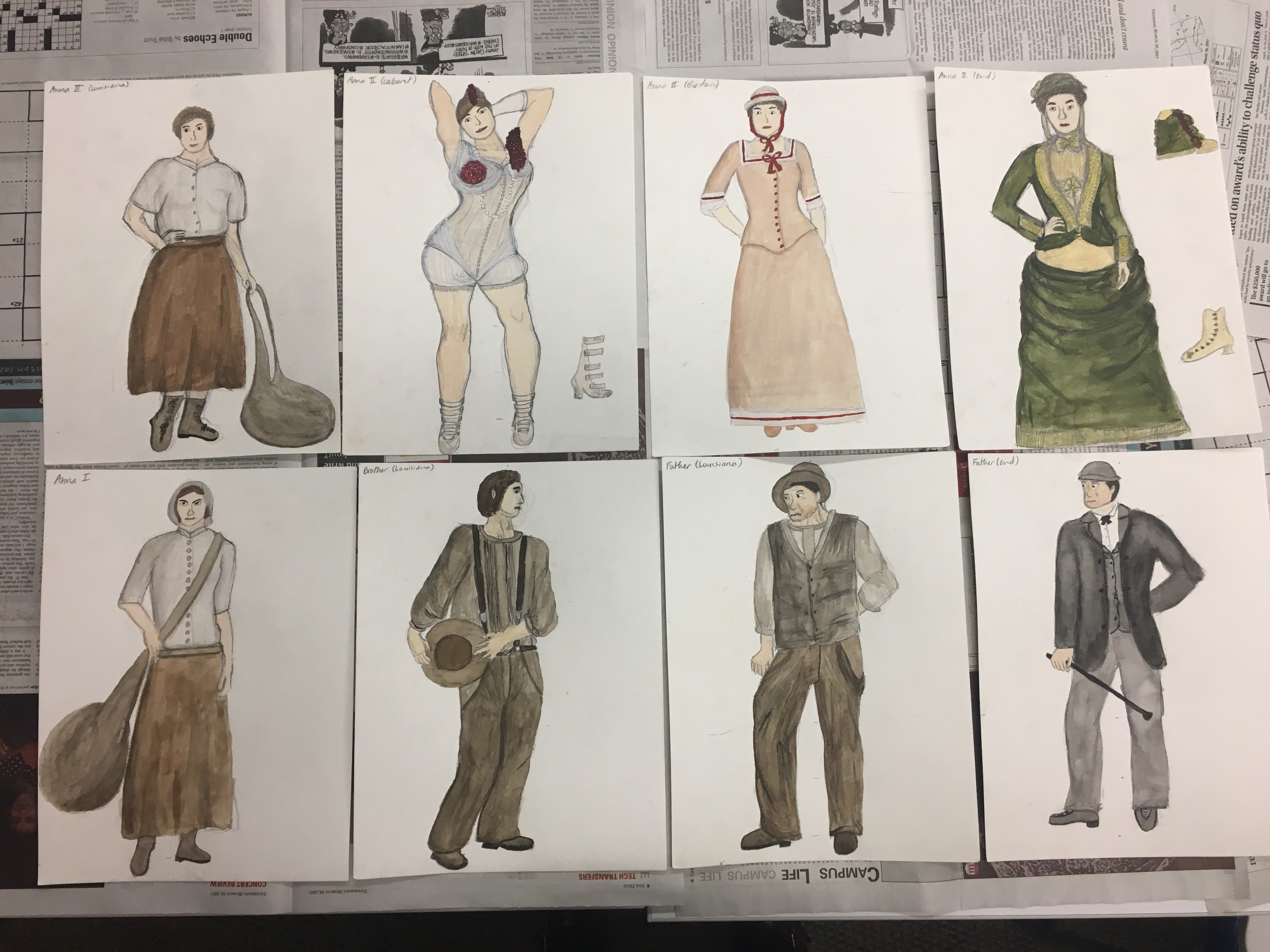 The really cool thing is that if you had showed me these drawings a couple of weeks ago, I wouldn’t have believed I made them. This class has totally been pushing my boundaries, which is a great feeling! Plus, I’ve learned a new, useful skill that’s really relevant to the design process. If I wanted or needed to sketch out a design in the future to better visualize it, I would feel fairly confident doing so.

It’s also super nice to have a class that diverges so much from the typical work I do for my MIT classes. Painting and especially sketching is really relaxing. It requires concentration, but in a different way than doing an algorithms pset. It’s like giving your brain a rest while sharpening your focus. 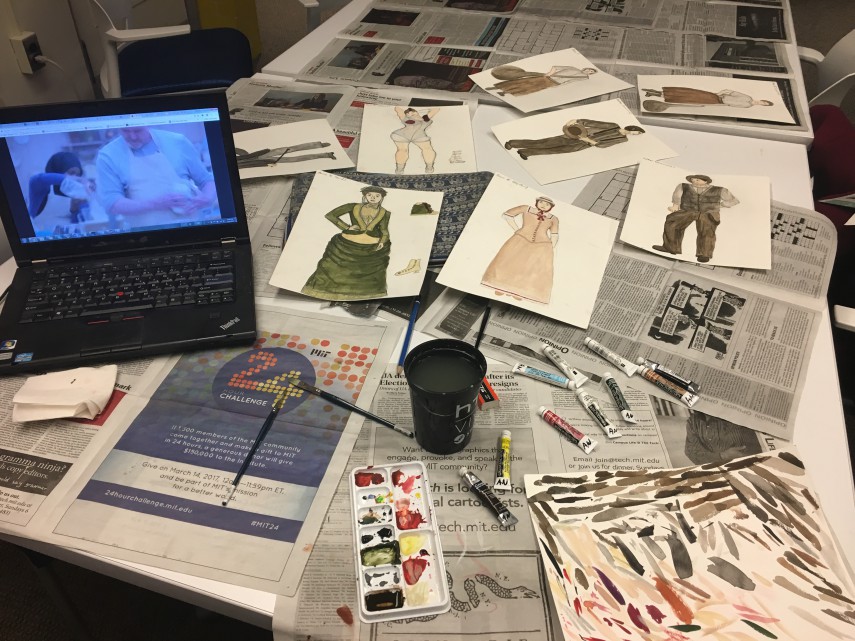 Setting up shop in a study room last Sunday to do some painting…I was hogging two whole tables but it’s ok because no one was around.
I may have been concurrently watching the Great British Bake Off.

I’m looking forward to some of the other work in this class. Our final project is making a bird costume primarily out of paper. You heard that right. We’re allowed to use any materials we want…except fabric. Although the seamstress inside me cringes a little bit, I’m suspending my disbelief*, because I’ve already gotten more out of this class than I was expecting. :)

*Still looking forward to a happy reunion with my sewing machine over spring break though :D