And how I've been spending them

You’ve probably heard the oft-repeated MIT adage about having to choose two between school, a social life, and sleep. I tend to think that there’s a way to balance the three as long as you’re organized and realize that there are only so many hours in the day. I just didn’t do a particularly good job of finding that balance this semester. :D

I took on a lot the second half of this year. I’m taking five classes; I’m doing research in CSAIL; I joined a club on campus; and I’m leaving time to keep meeting all the incredible people attending this school with me. Unfortunately, that means that sleep is the shortchanged leg of the trinity.

So I thought there was no better way to summarize second semester than by relating some of the most interesting things I’ve done while I probably should have been sleeping.

I recently joined the student group SaveTFP. Our official mission (as taken from our official website) is “reducing stress and facilitating student social activities while increasing health awareness and curbing dangerous behaviors at MIT”. In effect, this takes the form of organizing campus-wide social get-togethers and feeding people. Our events this year have ranged from Fondue and Trivia Night to our annual costume-party-meets-ice-skating event Spooky Skate, from classic Waffle Night to our Spring Carnival on Kresge lawn filled with games, cotton candy, and lemonade. 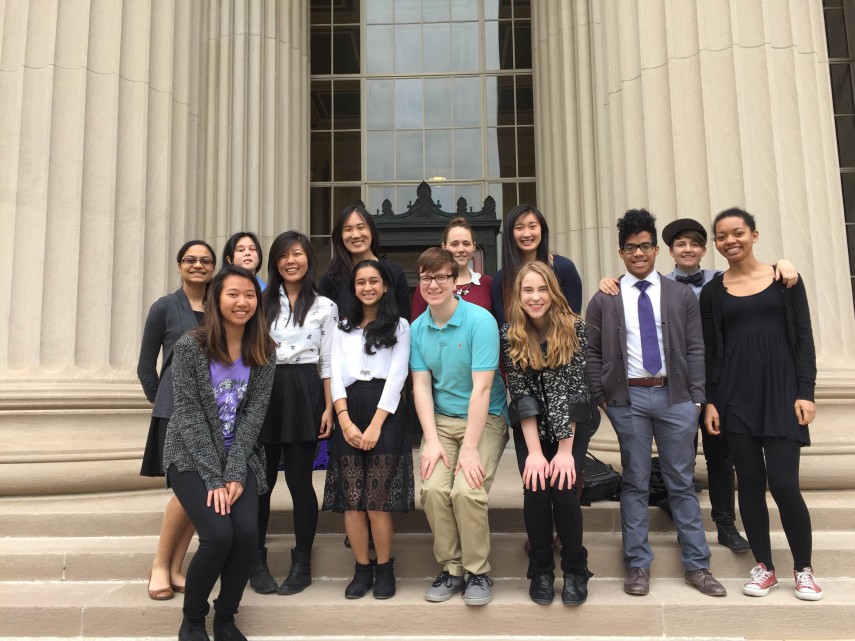 The current members of SaveTFP!

This semester, I helped organize crepes night! For four hours from 8:00-12:00, the members of SaveTFP mixed, ladled, and flipped countless trays of crepes from scratch. By the end, we had gotten pretty pro. 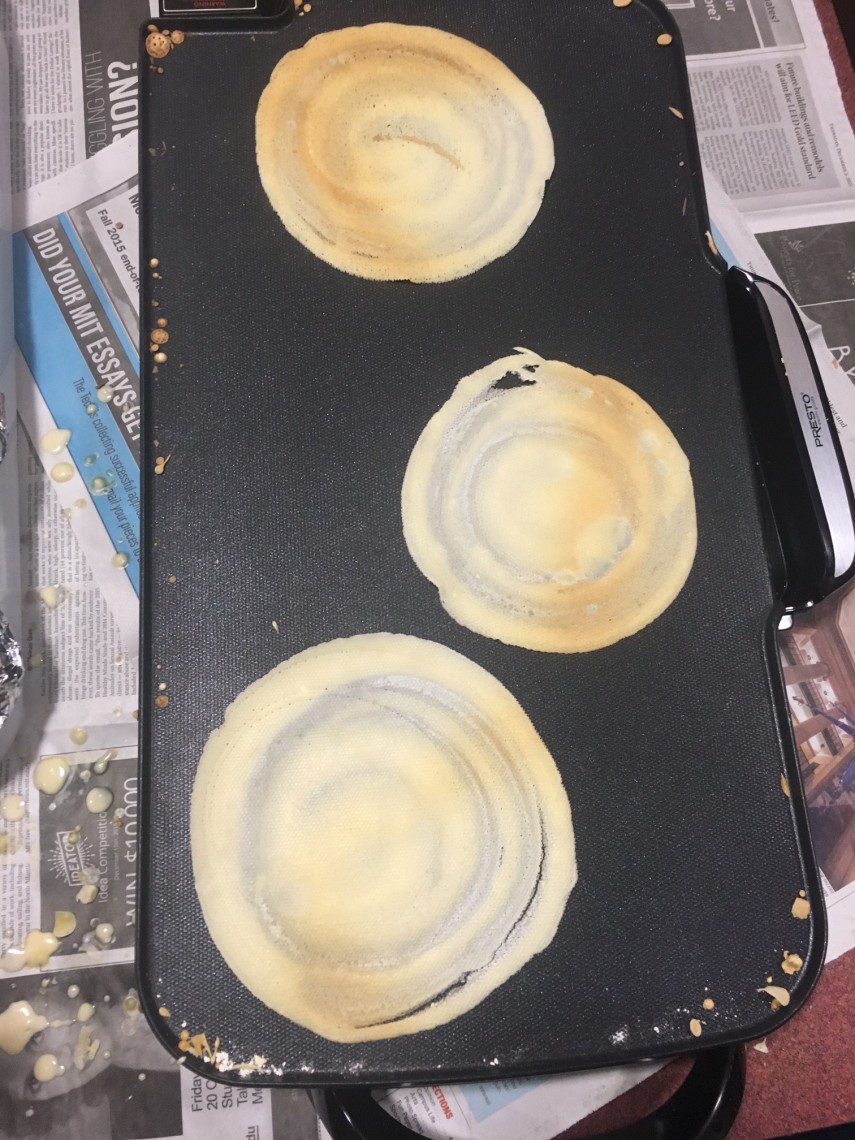 Look at these beautiful swirly crepes! Props to Niyati :) 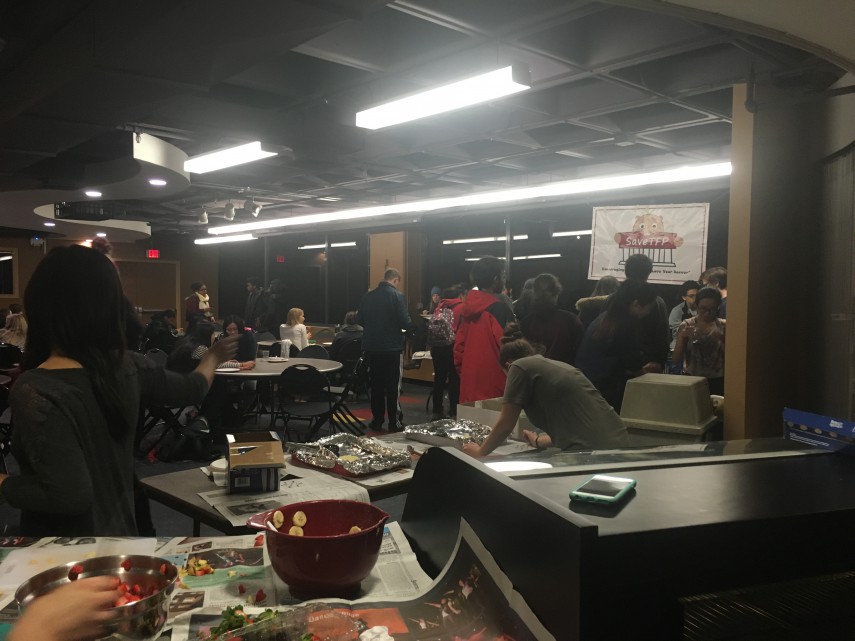 People gathering around the condiment table at Crepes Night!

One of the best parts about being a member of SaveTFP is just seeing the number of people that show up to our events. For popular events (popular=lots of food), we get around 300 people coming through from all parts of campus, taking a break from the workload of MIT to hang out with friends and enjoy some delicious chow.

2) Getting decked out for dinner. And then making a giant stuffed horse head…or two.

Mid-March was one of the most exciting weeks of the semester: Boston Restaurant Week.

For fourteen days minus a Saturday, restaurants all over Boston offer special discounted Dine-Out Boston menus, so that even cash-pinched college students can treat themselves to a mix of the city’s tastiest cuisine.

My friends and I were determined to take full advantage of the opportunity. Restaurant Week wasn’t just a chance to stuff ourselves with amazing food—it was a chance to take our noses off the grindstone for an afternoon, dress up, and treat ourselves to a day off-campus exploring downtown Boston. 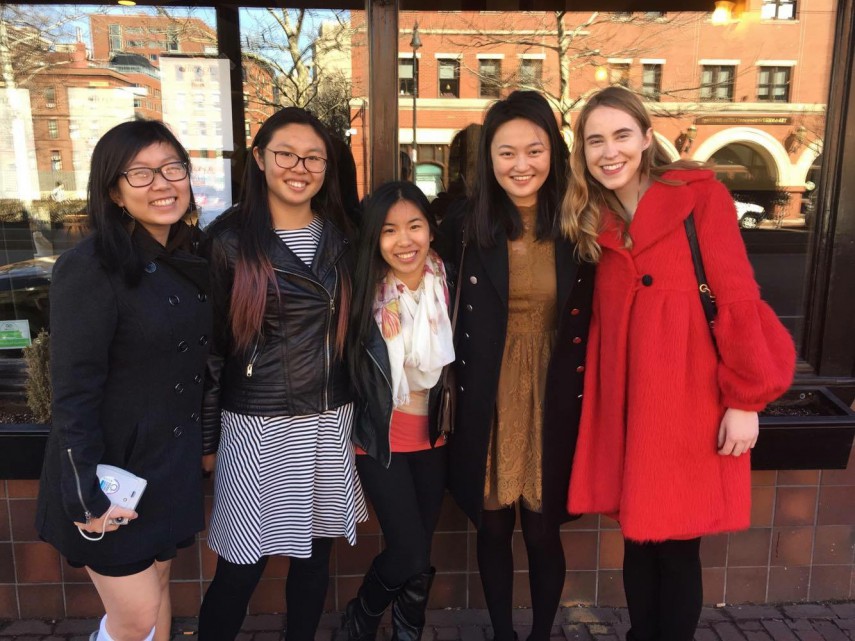 A picture from our girls’ day out! We had brunch at an adorable French restaurant and then wandered around the common and the shops on Charles Sreet.

A couple of friends and I decided that while we had the opportunity, we had to try to squeeze in another restaurant visit before the week was over. Even though work was bad that week, and even though midterms were piling up on the horizon, we decided to schedule dinner for a cute restaurant we found on Yelp. The only problem was, reservations were (understandably) very hard to come by. The only available time was at 9:00 p.m. on a Wednesday. We went for it.

I have pretty much the same visceral response to a booked OpenTable page as I do to the blaring red x you get when you incorrectly answer a physics pset problem :(

As Wednesday approached, I became more and more apprehensive about my productivity prospects for that evening. I had an important presentation due the next day, and a bunch of work still left to complete for it. And I wasn’t quite sure where in my evening the hours for that work were going to come from.

But in the true spirit of work-play balance, I decided to banish all thoughts of projects and presentations for those few hours. I spent an amazing dinner focusing on nothing but hanging out with some of my best friends (plus, I got to eat some of the most delicious food I’ve had access to this semester.) By the time our enormous dessert portion came around—a baseball-sized scoop of ice cream, an equally intimidating chocolate cake, a box of truffles, and a bowl of berries and whipped cream, we were utterly and happily defeated. 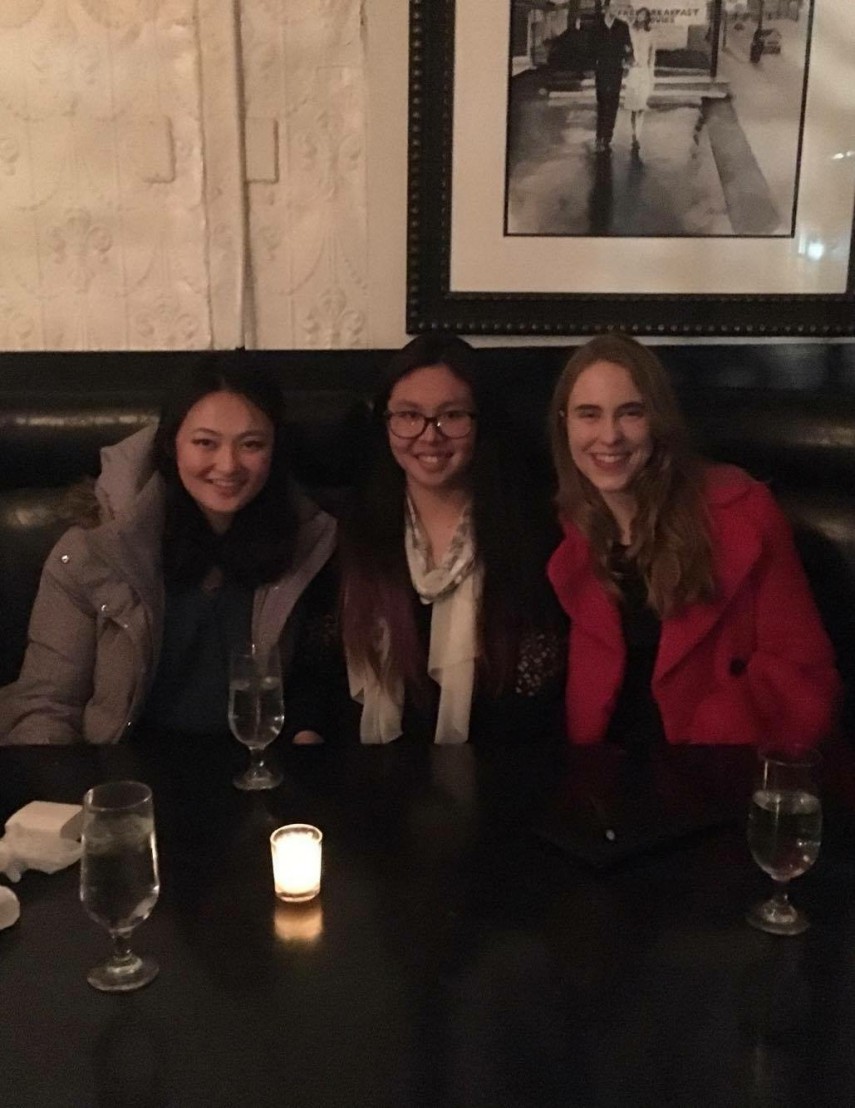 And then we returned to campus, and it was time to get back to work. I traded in my party dress and heels for business attire—uggs and crazy pants. No more fooling around—I had to make a stuffed horse.

What MIT class demands plushie construction as a required skill? If you haven’t heard of the famous 2.00b Toy Design, I refer you here and here and here (and even here), where many generations of bloggers have already done it justice. My team was currently exploring the idea of building a bike that looks and interacts like a real-life pony—and our prototype was lacking a cuddly equine head to test how kids would interact with the Speedy Stallion.

I spent the rest of the night in my workstation for the evening—the McCormick sewing room. A friend kept me company as I skillfully employed everything from sharpees to slipstitching to hot glue to produce a resemblance of a horse bust. After a long night spent hand-drawing patterns and packing stuffing, I emerged at 4:00 a.m. with these beauties. 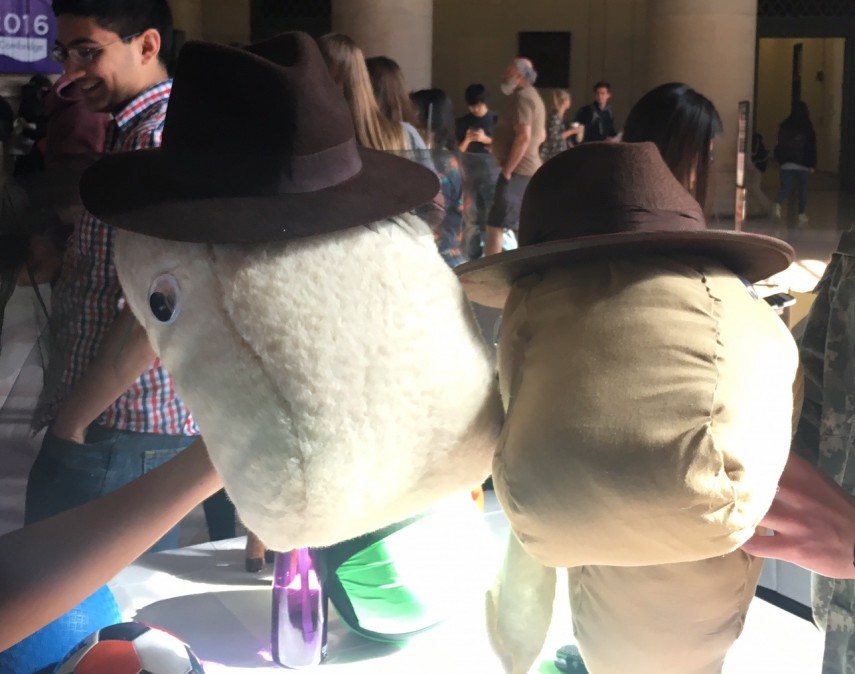 Meet Speedy and Spunky, all ready for an exciting adventure in the Wild West.

The days before getting on a plane are never good for my sleep schedule. I tend to leave all the travel prep for the last minute. A late night (even by MIT standards) combined with an early departure time (even by non-MIT standards) leaves little time in the middle for sleeping.

The Friday before spring break was even worse than usual. I had just finished up a week of midterms and projects and all I wanted from life was to be able to collapse on a Southern Californian beach for a week. But MIT had other plans for me.

I am currently doing some work redesigning the website for MIT’s Computational Biology group. I’m really enjoying the chance to experiment with website design and gain more experience with front-end programming. I was pretty much handed a prominent, data-rich website and given free rein to make it as cool as possible. That’s why the UROP program for undergraduates is so valuable: the research groups of MIT become giant sandboxes where even inexperienced freshman can explore their field of interest and learn skills they can apply to coursework and internships.

A few days before I left Boston, my supervisor sent me an email saying that he would like to have the changes I was working on pushed out, in some form, before spring break. The only time I had to finish the project was the evening before I hopped on a plane.

Ultimately, I was able to get my room cleaned, my luggage packed, and a preliminary draft of the website’s searching features done before I had to leave for Logan Airport at 4:30 in the morning. I clocked a grand total of 45 minutes of sleep…which is my all-time low. Also, I can’t sleep on planes. D:

Fortunately, when I got home to Los Angeles, I was able to sleep from 5:00 in the afternoon clean through to the next morning, which was the perfect start to spring break :D 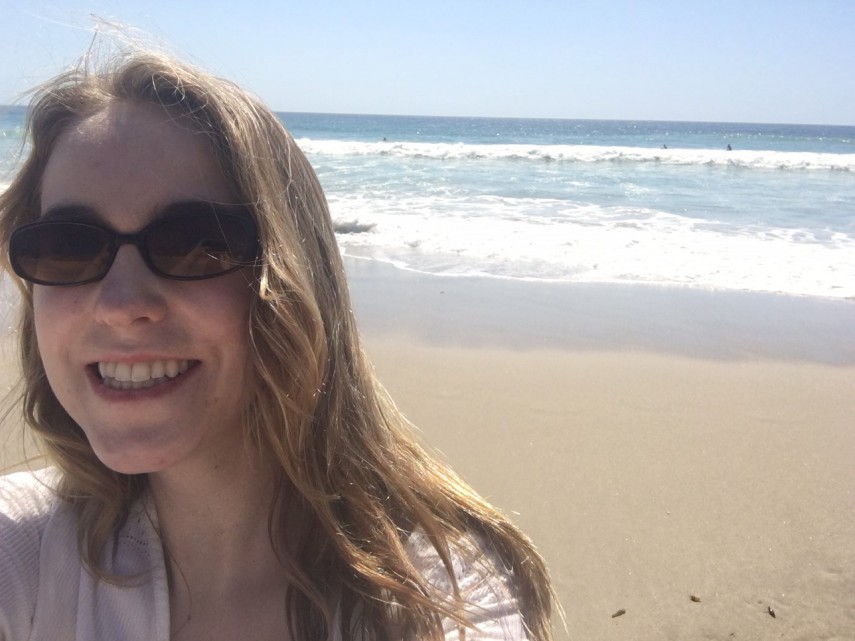 And I got the beach I was looking forward to, which made me very happy!!!

4) Being literally in the middle of a thunderstorm.

One of my favorite classes I’ve taken thus far at MIT is 6.s04, Fundamentals of Programming, an experimental computer science class slated to join the core curriculum next year as 6.009. Most of the work of the class takes the form of a lab that we have to complete every week and that explores a new algorithm or programming concept that was covered in lecture. Each lab involves coding a really neat, interactive mini-project. For instance, in the first week of class we produced a simple music player. We’ve created image processors, gas particle simulations, or, most recently, a virtual implementation of the classic board game Clue. 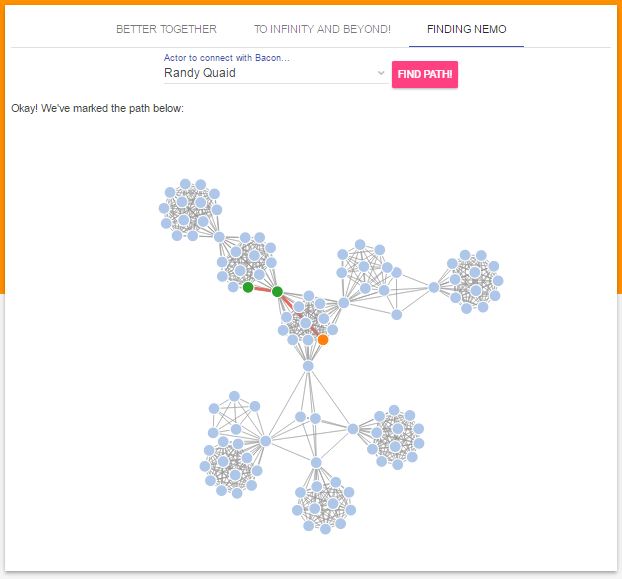 This is a screenshot of the UI for our Bacon number lab. The purpose of the project was to write an algorithm finding the number of degrees of separation between Kevin Bacon and a given actor, and then we were able to visualize the connections on this nifty graph!

6.s04 really speaks to me because it gets to the heart of why I declared Computer Science as my major—you can use it to create useful, exciting programs that people can interact with and benefit from. I get really into the labs every week, and often find myself puzzling out how to implement a certain feature in the back of my mind until I’m finally able to complete the assignment. On top of that, I’m a stubborn bug-fixer. I don’t want to step away from a project while something is still broken. That’s a problem, because the more tired I get, and the more imminently I should be heading to bed, the less likely I am to find the error that’s stumping me.

One night in particular, I was up late struggling with a truculent piece of code. I was so engrossed in my computer screen that at first I didn’t realize that the weather outside had gone from rainy to tempestuous. In fact, the cloud cover over MacGregor had turned into a full-out thunderstorm. From my window on the 10th floor of my dorm, I watched lightning arc across the horizon right in front of me and heard thunder reverberate through the building. At one point, the lightning and thunder perfectly coincided, and I realized that I was 100 feet up in the air literally in the heart of a raging storm.

Even though I didn’t end up finding the bug that night, staying up to see the storm was worth it.

It took me about halfway through the semester to finally admit that I had too much on my plate. I feel like I’m constantly concerned on checking the box on a laundry list of homework and projects, without really absorbing my assignments or the full breadth of extracurricular and social opportunities that MIT offers. Not to mention, I tend to operate better when I get >4 hours of sleep. Next semester, I’m definitely going to cut back, so I can put my full energy into the projects I do decide to undertake.

On that note, off to bed! 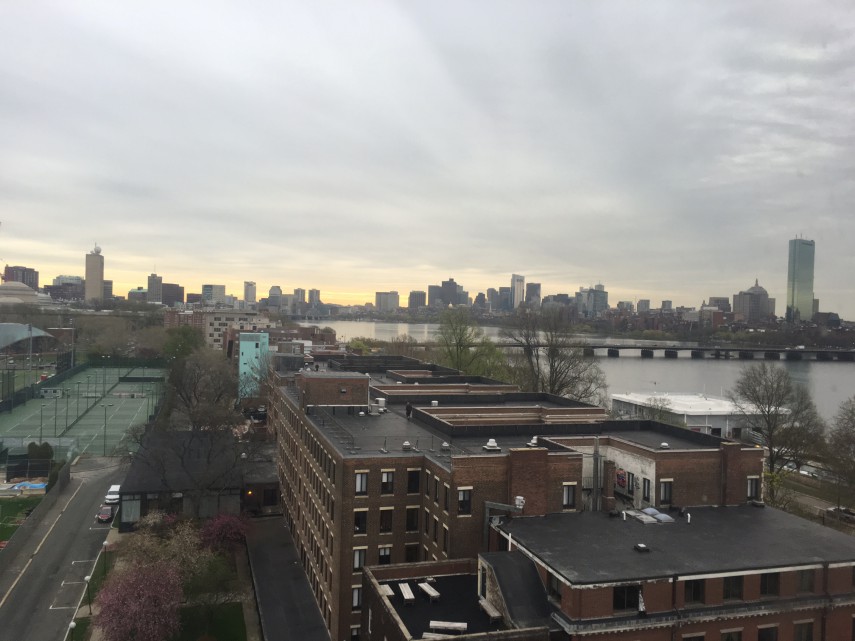 The sunrise over Boston.