Some science, some fiction: traverse the space and time of our bathroom ceiling.

This summer while Random Hall is closed I am living on Beast, 2E, the second floor of the East Parallel of East Campus. Today I want to tell you about the bathroom closest to my room. The 2E Bemis bathroom has two windows, three showers, two toilets, two sinks, 1507.75 wall tiles, and 3907.0625 floor tiles. There are 960.296875 wall tiles, 439.1875 floor tiles, and 70.875 ceiling tiles in each of the three showers; outside the showers we have a blue sky for walls, and in this space the three floors above us are broken out to reveal the night sky. The ceiling has three ceiling lights, 20.29861 ceiling tiles, four planets, 17 spaceships, three space stations, two moons, one galaxy, one bowl of petunias, and one existential whale.

A closer survey, perhaps with a telescope, reveals some species we have previously glimpsed from Earth.

Le Voyage dans la Lune (A Trip to the Moon) went to the moon 67 years before we did. It is considered the first science fiction film. The mural was painted by Grace K. ‘11. 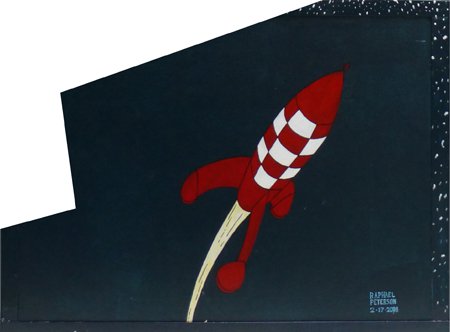 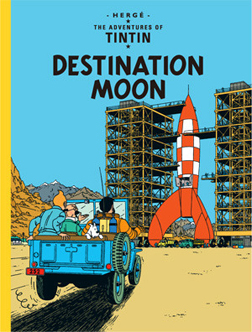 Here is the moon rocket from Objectif Lune (Destination Moon), the sixteenth volume of the comics The Adventures of Tintin. The mural was painted by Raffi P. ‘10; the original cover is from Wikipedia. 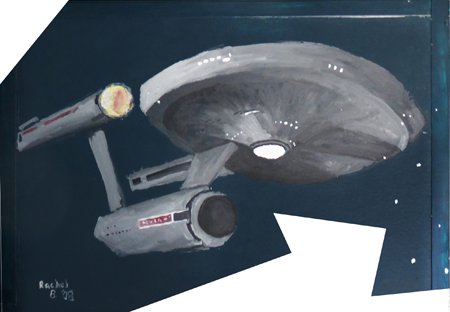 “Space. The final frontier. These are the voyages of the starship Enterprise. Its five-year mission: to explore strange new worlds; to seak out new life and new civilizations; to boldly go where no man has gone before.”

This is the starship USS Enterprise (NCC-1701) from Star Trek, painted by Rachel B. ‘09. If you haven’t seen Star Trek, I think you should start with my favorite episode, the Hugo-winning “The City on the Edge of Forever,” written by Harlan Ellison: 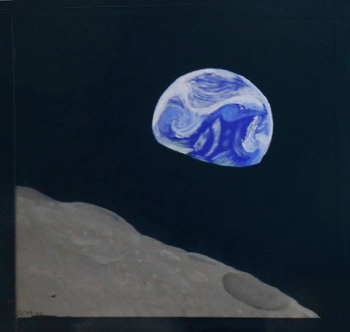 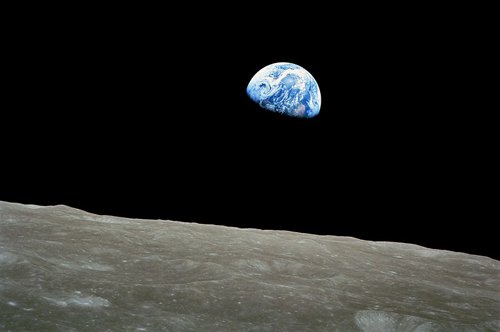 This one isn’t fiction: this is Earthrise, a view of the Earth rising from the moon, painted by Sean M. ‘08. The original photograph was taken by William Anders on the Apollo 8 mission to the moon with Frank Borman and James Lovell. From Wikipedia, here is Anders’s and Borman’s conversation as Anders took the photo: 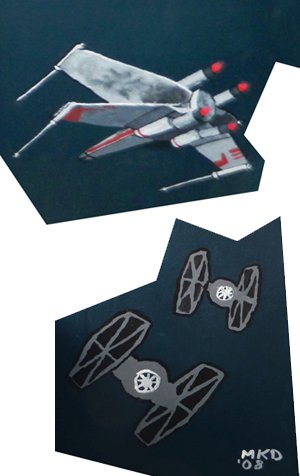 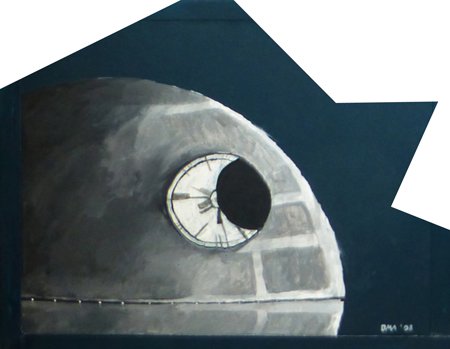 I haven’t seen Star Wars (I know, I know). Cory tells me that the Death Star is an improbably large battle station, the X Wing is the type of small star fighter used by the rebels (mass produced like a Volkswagen), and the Tie Fighters are the Empire’s mass produced star fighters. 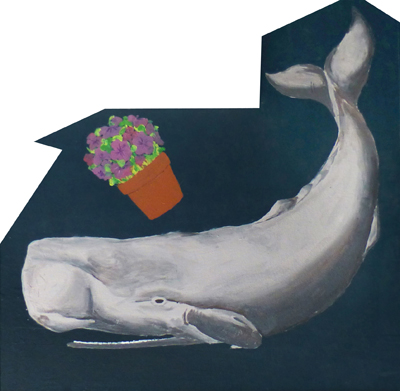 Another thing that got forgotten was the fact that against all probability a sperm whale had suddenly been called into existence several miles above the surface of an alien planet.

Why am I here? What’s my purpose in life?

What do I mean by who am I?

Calm down, get a grip now . . . oh! this is an interesting sensation, what is it? It’s sort of . . . yawning, tingling sensation in my . . . my . . . well, I suppose I’d better start finding names for things if I want to make any headway in what for the sake of what I shall call an argument I shall call the world, so let’s call it my stomach.

Good. Ooooh, it’s getting quite strong. And hey, what about this whistling roaring sound going past what I’m suddenly going to call my head? Perhaps I can call that . . . wind! Is that a good name? It’ll do . . . perhaps I can find a better name for it later when I’ve found out what it’s for. It must be something very important because there certainly seems to be a hell of a lot of it. Hey! What’s this thing? This . . . let’s call it a tail—yeah, tail. Hey! I can really thrash it about pretty good, can’t I? Wow! Wow! That feels great! Doesn’t seem to achieve very much but I’ll probably find out what it’s for later on. Now, have I built up any coherent picture of things yet? 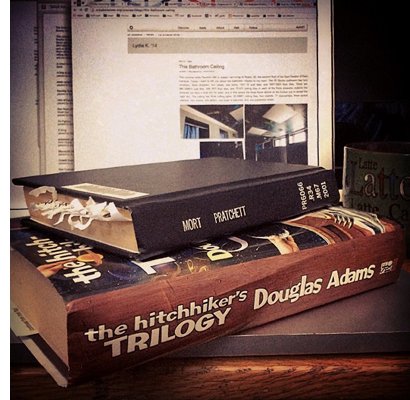 Never mind, hey, this is really exciting, so much to find out about, so much to look forward to, I’m quite dizzy with anticipation . . .

Or is it the wind?

There really is a lot of that now, isn’t there?

I wonder if it will be friends with me?

And the rest, after a sudden wet thud, was silence.

Curiously enough, the only thing that went through the mind of the bowl of petunias as it fell was Oh no, not again. Many people have speculated that if we knew exactly why the bowl of petunias had thought that we would know a lot more about the nature of the Universe than we do now. 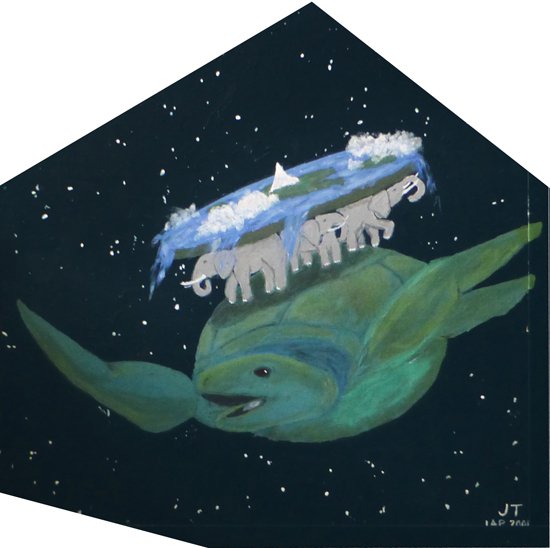 Nearby, above the sink, is Discworld, from Terry Pratchett’s 40 (and counting) Discworld novels, painted by Jo T. ‘08. Much like Douglas Adams, Terry Pratchett deals in hilarity and improbabilities. Here is a description of the Diskworld from the first page of The Colour of Magic:

In a distant and secondhand set of dimensions, in an astral plane that was never meant to fly, the curling star-mists waver and part . . .

Great A’Tuin the turtle comes, swimming slowly through the interstellar gulf, hydrogen frost on his ponderous limbs, his huge and ancient shell pocked with meteor craters. Through sea-sized eyes that are crusted with rheum and asteroid dust He stares fixedly at the Destination.

In a brain bigger than a city, with geological slowness, He thinks only of the Weight.

Most of the weight is of course accounted for by Berilia, Tubul, Great T’Phon and Jerakeen, the four giant elephants upon whose broad and star-tanned shoulders the Disc of the World rests, garlanded by the long waterfall at its vast circumference and domed by the baby-blue vault of Heaven.

Astropsychology has been, as yet, unable to establish what they think about.

Gromit, painted here by Jo T. ‘08, is on a vacation to the moon in a homemade rocket in A Grand Day Out with Wallace and Gromit. 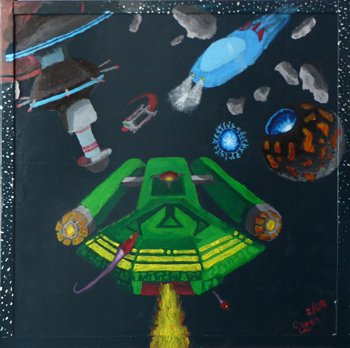 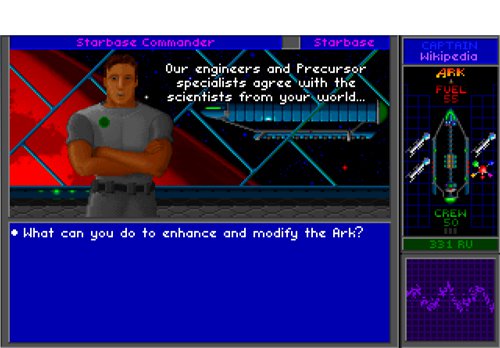 These are ships from the video game Star Control II (which came out the year I was born), painted by Capen L. ‘09. The screenshot of the game is from Wikipedia. 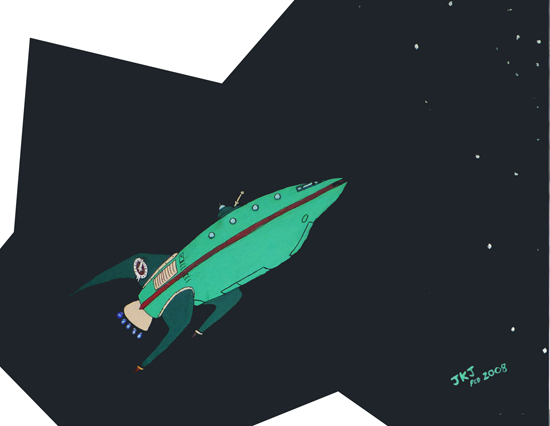 Planet Express from Futurama, painted by Jason J. ‘08, seems to be returning to the Milky Way from a delivery to a very distant world. 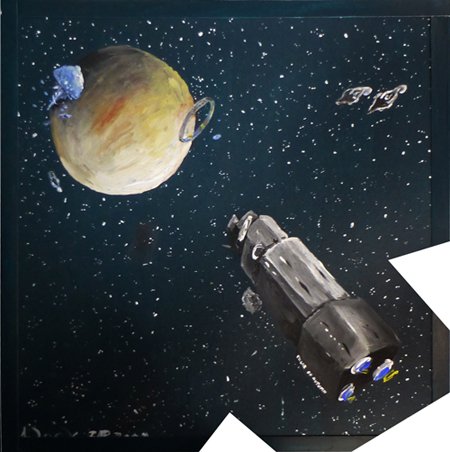 From Halo, here are the Pillar of Autumn, two covenant ships, and the space station the game is named after, painted by Audrey H. ‘11. I haven’t played Halo. Cory tells me that the space station is simultaneously a weapon of mass destruction and a massive stretch of habitable land. 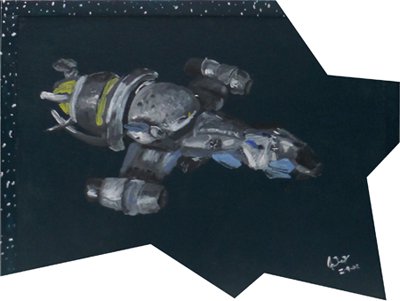 Dangerously close to the moon rocket is the ship Serenity from Firefly, a space western and one of the best and most short-lived shows. Serenity is shaped like a firefly, with a lighted tail. Here it is painted by Audrey H. ‘11. 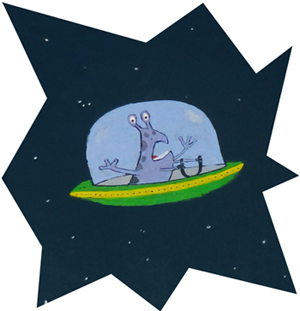 A distressed alien of unknown name and origin, painted by Jo T. ‘08 (“I don’t think it was from anything specific, just a Google image search.”) is at the entrance to the bathroom. I suspect it may be based on Slurms McKenzie from the Futurama episode “Fry and the Slurm Factory” (or an actual alien).

Finally we return to our own galaxy, the Milky Way, painted by Drew A. ‘08: our familiar home, floating across the ceiling through 9AC2DB and 244D63 skies, in a gallon of 384349 and dotted with stars.