Messy, slimy, colorful science from a class I taught for Spark.

This past March, a few days after my birthday, I spent a Saturday teaching three iterations of a three-hour-long class called Hands-on Introduction to DNA! to seventh through ninth graders at Spark, a day-long assortment of classes for middle and high school students organized by the MIT student group ESP (Educational Studies Program) and taught by MIT students and community members. ESP seems to contain most of my Random Hall friends as well as the wonderful Anna H. ’14, who has blogged about teaching ESP classes here and here.

This year’s 266 Spark classes included classes you might expect, such as Computational Language Theory and Extreme Math, and classes you might not expect, such as How to Plan and Execute Covert Operations in Deep Cover and The Game Mechanics of Pokémon. There was Synthetic Biology, Projective Geometry, Chocolate Tasting, and Slide Rules. There was Crayfish: Take It Apart!, Sea Urchin: Take It Apart!, and their antithesis, Put Together the Pile of Junk! 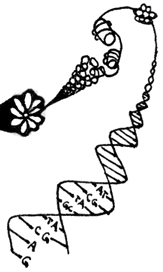 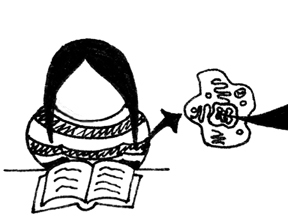 Our bodies are an ecosystem of hundreds of trillions of tiny bacteria and tens of trillions of our own cells, small bags of stuff that do a lot of work to keep us alive. We are interested in the nucleus of the cell, which encloses the DNA.

Your DNA is a story, uniquely yours, that you read out as you live and eventually pass on to your children. Instead of paper, it is written on a long string using only four letters. Each word in the story is three letters long. The words form sentences called genes, which, alone or in groups, determine the traits you start with, for example your hair color, your eye color, and your blood type. Though your cells have diverse specializations, your DNA is identical in every cell of your body. It contains all the information needed to build you up and then maintain you; it determines how you will grow and develop within your environment and to a potentially large extent it dictates how and when you will eventually break apart and die.

A priority in current research is deciphering our DNA and the DNA of other species for use in medicine, agriculture, and history. The hope is that by learning how to read our DNA, we will be able to better understand genetic disorders and detect them before they appear, improve crop yield, and understand how we got to be human. Genomics is a new and quickly evolving field with a huge capacity to extend and improve human life.

The cell sends the completed protein product to the Golgi apparatus, the cell’s post office, and the Golgi packages the protein and sends it to its destination inside or outside the cell. The protein then carries out the function prescribed by its encoding DNA, whether it is the keratin in your hair or an antibody in your immune system. Meanwhile the original DNA is safe in the nucleus, in two copies. It never leaves, and it is split apart and replicated only when the entire cell is replicated.

The human genome is written in about 3 billion base pairs, or letters. If you stretch out the DNA from one nonreplicating cell, it will be about two meters long (3 billion base pairs in 23 chromosomes ∙ two of each chromosome in the cell ∙ 0.34 nanometers between consecutive base pairs). If you concatenate the DNA from all of your cells and stretch it out as one string, it will reach the sun and back 67 to 333 times, or the moon and back 25,000 to 125,000 times (2 meters of DNA in each cell ∙ about 10 to 50 trillion cells in the human body ÷ 300 million kilometers from the Earth to the sun and back, or 800,000 kilometers from the Earth to the moon and back). In the cell, the DNA is wound tightly around proteins called histones, and for this reason, even though we will try to degrade the proteins, the DNA will precipitate in clumps rather than clean strings when we extract it from a vegetable or fruit.

Here’s all that in vivid, computer animated action:

This video is from the Walter and Eliza Hall Institute of Medical Research in Australia. They have other equally mesmerizing and informative animations in high definition on their web site, and you should go watch them, too, if you enjoyed this one.

While we watched this video we set up the first steps of the DNA extraction protocol, which contains a convenient 10-minute break. Below is the protocol we used. The students wanted to know what each step does to the DNA, so I’ll try to explain it here as well.

Among the materials, rubbing alcohol (isopropyl alcohol) can cause irritation to eyes, skin, or the respiratory system. Isopropyl alcohol vapors can irritate the eyes and the respiratory system, contact with eyes can cause damage and burns, and ingestion or inhalation can cause vomiting, drowsiness, and death. The lethal dose is about one cup. It’s unlikely you’ll be able to drink very much, but if you do you will die. You also don’t want to eat the laundry detergent or get it in your eyes.

The DNA will appear as white goop on the surface of the green or red goop. You can spin it onto the BBQ skewer like cotton candy, but I think it looks prettier and much less gross if it’s left in the cup. Here are some photos my students took at the end of the process. The fruits and vegetables used, clockwise from the top left, are strawberries, peas, corn, and mixed berry, all frozen. That no one photographed the DNA extracted from the corn is, I think, additional testament to frozen corn not being very interesting.

Afterwards, I opened the floor to questions and short chalk talks and we ended up going in very interesting directions. I almost wish I’d had an older class so that students could teach each other more than I talked at them, but at the same time it seems like younger people ask more questions and their questions are often more interesting. Some of the things we talked about were transposons, viruses, cancer, stem cells, ribosomes and the RNA world, DNA sequencing technologies, sex chromosomes and their evolution, alternative splice sites, and the evolutionary benefits of aging and death.

I got some emails in the following days expressing interest in biology and asking about things we talked about in class, which was such a wonderful feeling. If you have time and a presentation at your local elementary school seems like something you would enjoy, you should ask about trying it. A few weeks ago my mom repeated the presentation and the DNA extraction with my little brother’s fifth grade class, and apparently they asked even more interesting questions. It seems like elementary school teachers are usually thrilled to have alumni or parents present about what they’ve been up to in high school and college and beyond.

If you are in middle or high school and you’d like to learn more about genomics and DNA, there are free resources online that you should check out:

If you have questions, if you do a presentation, or if you try a DNA extraction, alone or with a class, and you comment or email me about what happened it would make me very happy—especially if you are adventurous and try a DNA extraction from something new.

(Somewhat relatedly, today is the 161st birthday of Julius Petri, who invented the petri dish. Check out his Google doodle.)