So quite recently I made a post on Facebook about a few things I had experienced as a black person at MIT, and I put it in the form of the popular ‘Subtle Asian Traits’ page that has been making its way around the Facebook. For those of you that don’t know S.A.T is a page for Asian people to come together and talk about their shared experiences, so I decided to do the same for black people at MIT 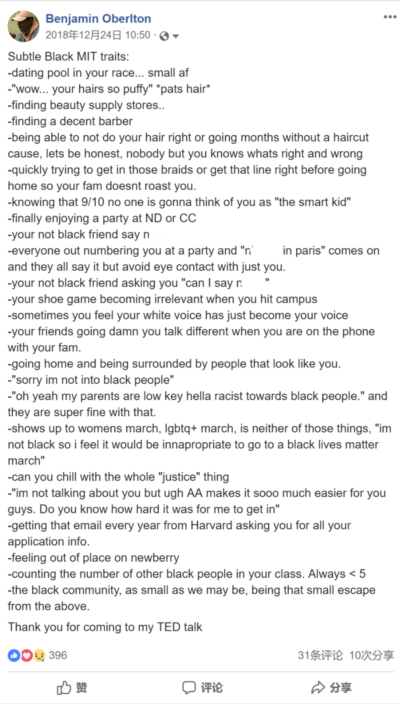 It seemed to be something that got a lot of attention, and I thought it might be a good idea to go a little bit deeper on what I meant by a few of these things, and what it can be like being a part of one of the smallest minority at MIT outside of Native Americans.

I want to preface this all by the fact that I felt like I knew what I was walking into when I decided to go to a school like MIT, a school that was not in a predominantly black area, and had a pretty small percentage of black people (about 6% of undergrads and about 1% of graduate students https://web.mit.edu/facts/enrollment.html ). In high school even though I normally went to schools where half of the students were black, I was often the only black kid in my class, given that I almost exclusively took AP classes. So I just assumed college was going to be a lot more of the same. A lot of “I don’t feel left out exactly, but there is a level of connection that I just can’t or don’t have with you guys.”

I don’t say this all to complain. I have met so many people that have become integral to my growth as a scientist, a dancer, and just as a person in general. I wouldn’t trade my experience at MIT for anything and I am so thankful for all the opportunities MIT has given me. However, as a black person you will quickly realize one big thing… A large amount of the MIT population has spent very little if any time around black people.

A comment you will hear quite a bit is “yeah my high school had like two black people,” or “I think you might be my first real black friend.” I don’t say this to fault my classmates, it’s just the way things are for a lot of people. Sadly, a lot of the high schools that are known to send a lot of students to high level schools just don’t have a very large African or African American population. Personally, I think this fact is one of the main factors in about 90% of the things I listed in my facebook post. Some people just really don’t know what is okay and what isn’t due to lack of interaction with actual black people.

I know for some people this is wild, especially for someone like me who has always lived in an area with a very large black population. However, for some, interactions with black people are limited to things like sports, music, movies, and a certain president (shoutout my boi Barack Obama… we miss you). This in turn leads to things like casual use of the n word by non-black students, casual hair petting, patting, rubbing, touching, etc. and a lot of people having strong feelings about how ‘easy’ it was for me to get into MIT.

I make this connection between lack of interaction and issues like the casual use of the n word or a feeling of animosity towards black students getting into big schools because I have to realize discussion about topics such as these have historically happened outside the presence of an actual black person. With no black person to explain why the n word, to a lot of people, is more than just a word, or to explain historically why a lot of black students don’t have the same resources or opportunities in high school as a lot of other students, ideas and mindsets can be made about a group of people that may have no real tangible presence in your life. So to a lot of people the n word is just another word because there has never been someone around that it might hurt or offend. Affirmative action is just a way for black people to get in college easier because there has never been someone to explain that they were working multiple jobs while trying to get into college. I am nottt sure where the hair touching came from…. But yeah stop that.

A few of the other things on my list are just a matter of the small size of the black population at MIT. If you want to date someone in your race (or you just like that melanin) you are going to have a lot smaller group to choose from. You will often find that you are the only or one of very few African Americans in your classes. Finding a decent barber is hard (honestly just start growing it out and find someone to do your line). If you are looking for hair for braids at a beauty supply store, try to buy it at home or something because beauty supply stores are few and far between. If you are a heavy hip hop and dancing person, when it comes to parties I would strongly recommend going to Nu Delta or Chocolate City parties. I found all of these to just be a result of a small community, but every one of them can be overcome if you put in a little bit of effort.

Despite all of this, the African and African American community is an amazing place. BSU is constantly working for our best interest, the National Society of Black Engineers is a great place to find internships and make connections, Black Womens Association is always holding their own dope parties, keeping you updated on that hair care, and giving black women a place to be themselves. Chocolate City and Nu Delta can be a good option to live if you really want a black living group, and all in all despite the lack of initial knowledge that a lot of MIT students have, most MIT students are willing to listen to what you have to say. If you are willing to take a little time and talk to people, a lot of students will quickly realize where they may have been wrong and be very genuine in their change of mindset. This isn’t everyone of course, but I have historically been pleasantly surprised by the openness of a lot of students to make a change in their mindset. And for a lot of Asian, Hispanic, and White prospective students, I think if you are coming to MIT and haven’t spent a lot of time around us, get out there, meet some new people, listen, learn, we can be dope from time to time.

If you are a black student coming to MIT, I just want you to know you will encounter hurdles as a student here. However, I  think it is something you can without a doubt overcome, and at the end of the day I think I and a lot of others are much better people for our time here. I didn’t make this post to discourage anyone; I made this to make people aware of some of these truths so you can be as well prepared as possible for when you start your time here. MIT is a beautiful wonderful place, and there is nothing I want more than to see more black faces around campus. So with that in mind, I hope to see a lot more of you guys around, and if you see me come say hey!