The chimpanzee-human relationship, and CEO pay.

Perhaps the most interesting research is the work that surprises, startles, and really makes you think. On the train on the way back from a conference at Princeton, I read two articles in today’s New York Times which discussed just that kind of research from MIT.

The first article, about genomics research, had the following teaser on the front page:

A Later Split From Chimps?
The split between the human and chimpanzee lineages may have occurred millions of years later than fossil bones suggest, and the break may not have been as clean as humans might like.

The study from the Broad Institute of MIT and Harvard was headed up by David Reich (also an assistant professor in the Department of Genetics at Harvard Medical School) and Nick Patterson (the first author) was published in this week’s issue of the journal Nature.

The Times has a very good explanatory graphic: 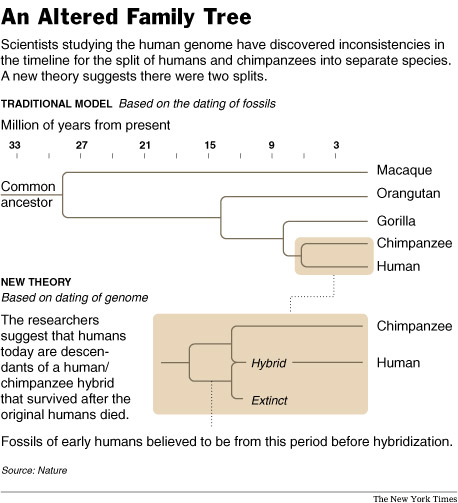 The second article dealt with economics research on the controversial topic of executive compensation.

Professors Xavier Gabaix of the Economics department at MIT and Augustin Landier of the Stern School of Business at New York University went beyond the hype to see what is really going on with salaries of CEOs in the Fortune 500. Here’s a bit from the article:

[Professors Gabaix and Landier] suggest that the higher salaries for chief executives can largely be explained by increases in the value of the stock market. Viewed as a whole, the salaries are a result of competitive pressures rather than the exploitation of shareholders.

Their core argument is simple. If we look at recent history, compensation for executives has risen with the market capitalization of the largest companies. For instance, from 1980 to 2003, the average value of the top 500 companies rose by a factor of six. Two commonly used indexes of chief executive compensation show close to a proportional sixfold matching increase (the correlation coefficients are 0.93 and 0.97, respectively; 1.0 would be a perfect match).

This work also merits further reading. Check it out: