from a small but enthusiastic sample of prefroshies

This Monday and Tuesday, undergrad volunteers banded together in a roomful of Institvte phones to individually congratulate and chat with each of the freshly admitted candidates for the class of 2016. We all stayed longer than we’d planned; my hallmate and I swore we would only stop in for a few calls, but ended up making hundreds of calls for over four hours despite our bleeding GPAs and unfinished psets. It was a little like gambling; only one in seven or eight of you guys picked up (shame!), so we’d have losing streaks for a while, give up hope, suddenly get a real, live, excited prefrosh and have a great 45 minute conversation, and ride on a high of vicarious prefrosh cheer through the next few voicemails in a vicious cycle.

The telethon is a fun tradition that I think brings a really nice personal touch / warm fuzzy feeling to the seemingly heartless process of admissions. When I invited Stephan’13 to come volunteer at the EA telethon last year, his face fell and he plaintively said, “Anyone can go? I thought the people who called us were, like, special or something.” Ironic, then, that he is insanely clever and hardworking, like, oh, I don’t know, most people who make it through this place.

My calls only made it through to a handful of people, but you seemed really cool! Thanks for your time, bros and girl-bros. With Campus Preview Weekend and enrollment decisions approaching, I’d like to share some relevant FAQ’s I was asked while telethoning, in hopes that they’ll be useful for some of the prefrosh we didn’t manage to reach.

I am trying to decide between MIT and ____. Their campus preview weekends coincide. What should I do?

I know a lot of people who had this problem as prefrosh, and while I’m not going to say “omg we are totally the best thing ever so you should just forget about those other hussies”, because you are the best judge of which school is best for you, I’m pretty sure that MIT’s campus preview weekend is (a) the most fun (b) the most revealing about its culture (c) the most differentiated from a normal campus tour. Most campus preview weekends don’t differ drastically from a tour besides the scale; you will likely see several more organized student events, talks, and dorms than you would by visiting on any other weekend.

CPW is an intense compression of an entire undergrad experience at MIT, minus all the hard work, into three days. Events literally go around the clock; there are never less than five or six events going on at a time, and usually many more, with the exception of five or six hour breaks for sleep in the wee hours of the morning. The entire campus bands together in a concentrated burst of effort to do everything that lies at the intersection of fun and possible, everything they normally do during the year for fun but smushed together at an impossible density. A cappella groups run around serenading you all over campus; East Campus and Random Hall bust out the dewars and make you liquid nitrogen ice cream; every living group has a barbecue at least once a day; every student organization and club shows off demos / breakdances / unicycles / juggles / flies hovercrafts / blows things up at a giant activities fair. You’ll glowstick, play underground capture the flag, maybe even play glow-in-the-dark capture the flag. You may walk through kiddie pools filled with non-Newtonian fluid. You’ll meet people you will stay friends with throughout college, even if you decide not go to MIT. You’ll talk to tens of metric tons of us. You may even meet a professor you want to do research with. (When I was a prefrosh, I pulled a super lame hack with some other prefrosh I met on the internet.)

You’ll almost certainly overeat. Remember that there will be food at almost every event, and save room for a few flavors of liquid nitrogen ice cream.

More laid-back events involve teaching increasingly obscure math late into the A.M. until all attendees leave or fall asleep, the inevitable “MORE FOOD THAN YOUR BODY HAS ROOM FOR”, talks by faculty members, open houses with every department, program, and organization on campus, hair dyeing (good luck explaining that to your parents), and several thousand bouncy balls being thrown from a Senior Haus balcony into the courtyard. 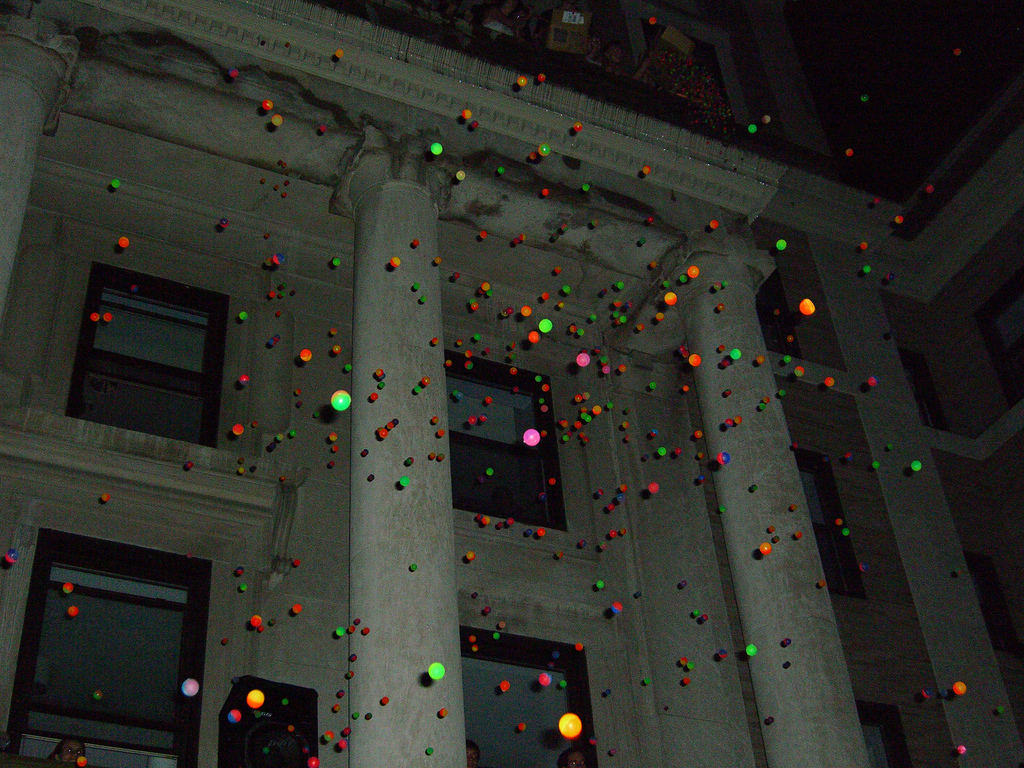 It’s a little more stressful for us, because we have a lot of logistics to take care of to produce this giant, mostly student-driven welcome to you, on top of normal schoolwork, which we don’t get a break on. But we don’t really need sleep any more, so whatever.

tl;dr CPW is not just a glorified campus tour; skipping it and stopping through the next weekend will still be informative, but you will find out much more about your future undergraduate community at MIT CPW than you would at any other preview weekend.

still tl;dr come to CPW you will not regret it

None of my following FAQ answers will be as exciting as this one. Ever. Sorry.

Can I do research freshman year? Like, real research, I don’t want to sit around cleaning test tubes all day. I want to run my own project, and also have a pony.

You can have all of that except the pony. For reasons unfathomable to me, MIT is stellar at undergrad research. Many, many freshmen do real research as early as their first semester. My next-door neighbor, Martin’15, started working in the Drennan Lab fall semester — he uses X-ray crystallography to analyze enzyme structures. You can work here in exchange for U.S. dollars or class credits, or you can work abroad. Several of my close friends have done research in Spain via the MISTI program, which extends to twelve other countries. There’s also a program called D-Lab that’s geared toward developing countries. Someone could write a hefty treatise on this, but the short answer is: yes, you can do research here without prior experience. The tough part will be finding time.

Can I continue pursuing the arts at MIT to <insert your own> degree of seriousness?

In my personal opinion, the MIT admissions process, brutal though it may be, does a great job picking people that are not just good at science but proficient in many areas. People who are good at doing things are not characterized by their ability to nerdily rattle off Science Facts, after all, but by their creativity, love of learning, and work ethic. I’m sure you already know this. What I’m getting at is that you will likely be able to find a variety of student groups with different commitment levels that suit your needs while you are simultaneously doing Science Things, because more MIT folks than you would expect are really artsy. The usual deluge of examples courtesy of the availability heuristic: my hallmate started doing professional graphic design at age 15 and is currently CTO at a startup even though he’s only a sophomore now, my boyfriend is both a full-time web developer and a short film composer, and once I went to a Boston Pops concert and this girl who was in one of my compsci classes at the time unexpectedly hopped up on the stage and performed a Mendelssohn concerto with them.

MIT has a lot of interesting humanities professors: examples include Junot Diaz (see jkim’s take on his writing class), Martin Marks, who teaches film music history and composition and serves as the curator for the National Film Preservation Foundation, and Mark Harvey, who is a mild-mannered lecturer by day and a crazy trumpet-playing jazz orchestra leader by night, crazy in only the best of ways, although I still hope he doesn’t read this.

MIT’s humanities programs are good, but obviously can’t compete with real art colleges. Fortunately, you can cross-register at Harvard, Wellesley, MassArt, or SMFA without paying extra tuition. The surrounding area is also home to Berklee College of Music, the Boston Symphony Orchestra, and the Boston Museum of Fine Arts. So, if you venture off campus, you can find lots of non-MIT organizations too.

What will dorm life be like? I don’t know where I’ll fit in! Ahh!

So don’t worry about that just yet — you’ll have a few months after enrolling to figure it all out.

MIT sounds great and all, but what if it’s too difficult? I’m just a plain ‘ol high school senior.

So were most of us, once. Don’t worry, you didn’t get admitted on accident. MIT is undeniably very difficult, but freshmen are given the boon of Pass/No Record for a semester, in order to help ease the pressure as they acclimate to the disturbingly rigorous coursework. It’ll help to remember that the work is made difficult in order to help you learn more, not because the professors are evil extradimensional creatures who feed upon human suffering.

There are also many resources such as office hours, tutors (MIT pays students to tutor other students), structured study groups, and structured freshman programs such as Concourse and ESG. You will also end up organically forming study groups with all of the freshmen in your living group. Basically, if you try to do everything on your own one hour before it’s due like you did in high school because high school classes were trivial for you, you will fail miserably, and if you reach out for help, life will be much easier. You will probably still get 20% on your first chem exam and finish the semester with your first C or two, boo hoo, but no one will ever see it and you’ll do just fine in the grand scheme of things.

I elaborate upon freshman academics in graphic detail in this post; you will have plenty of time to figure that out if you do choose MIT.

I want to go to MIT for grad school; will going there for undergrad hurt my chances?

Even if you end up with the same major that you originally planned, your experiences over the next four or so years will make you a radically different person with different priorities. Grad programs’ desirability and strengths vary wildly depending on the specific research interests and emotional baggage you leave undergrad with. So it’s a terrible idea to have your 17-year-old self make decisions for your 21-year-old self. Not to mention that if you’re good enough to get into MIT grad school, well…that’s pretty damn good.

The overall feeling I’m painting here, especially with CPW and all, may seem excessively optimistic and idealistic. Nothing is perfect, obviously; tuition is horrendously expensive, the winters are cold, and there will be conflicts and bad classes and quarter-life crises. I think I made the optimal decision in coming here, though, and hopefully all our ramblings can help you figure out if this place is right for you.

That is all for now, folks. Feel free to ask more questions in the comments! (Trolls: I know where you live, please refrain.)