Thanksgiving and a Small Hack by Joel G. '18

We’re approaching the end of the semester with remarkable velocity. There are just two more weeks of school before finals, and all of my classes have already assigned the final pset of the year. Post-Thanksgiving is effectively Christmas, so everybody cue an abrupt switch of music genre.

Today I’m just going to ramble about minor happenings this week, starting with Tuesday’s 18.02 lecture. Class opened with something rather unusual – massive stacks of flyers were being frantically passed from person to person before Professor Minicozzi arrived: 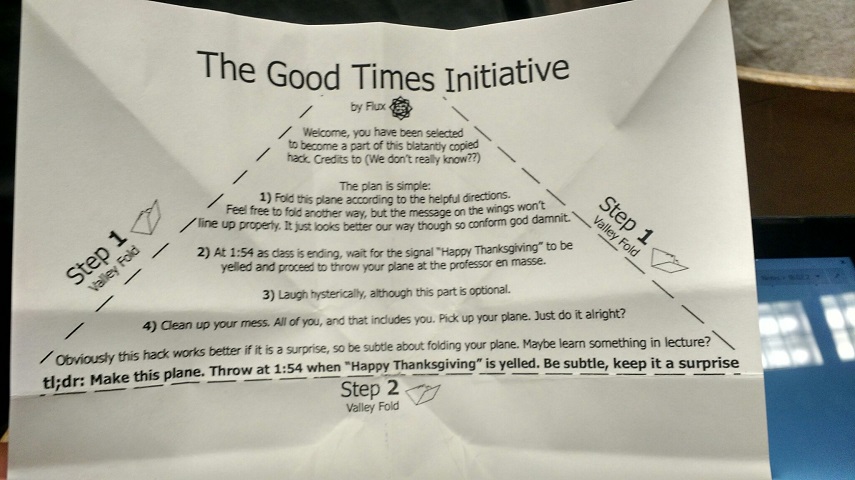 Of course, this hack has been executed before, but it is no less impressive to perform it again. We patiently waited through an introduction to Stoke’s Theorem (to which nobody was very attentive, I’m sure), and, at the appointed time, magic happened:

Poor Professor Minicozzi didn’t even get to finish the example about surface integrals. Of course, as a hack, nobody knows who was responsible, but it was executed perfectly and was a great way to end the last lecture before break.

In other Thanksgiving-related news, Conner 3 had an early Thanksgiving potluck last Sunday. Nearly our entire floor planned, baked, cooked, or at least pretended to, and had an extravagant dinner together in the Porter room, an ancient ex-dining-hall-turned-common-space on the first floor of Burton-Conner (and by first I mean second, because we start our list indices at 0 like real programmers). The food, company, and conversation were all equally fabulous, and it felt great to have an excuse to break out formal attire. 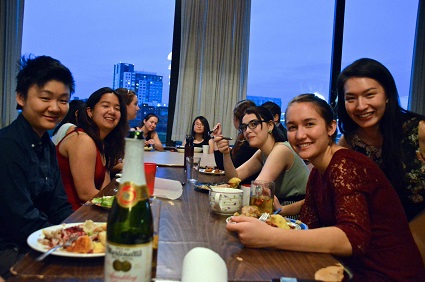 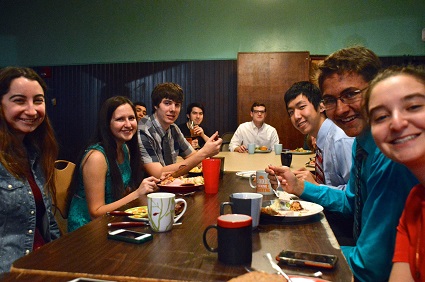 Open potlucks are generally heavy on unhealthy desserts, so I made sure to break the trend by mixing prodigious amounts of sugar, corn syrup, rice krispies, peanut butter, and chocolate chips into a pan of bars that probably had a higher energy density than weapons-grade plutonium. It also hopefully tasted better, with marginally milder side effects. After the potluck, the leftovers were later stolen and devoured overnight by Conner 2, which will definitely incur some form of retribution. Watch your back, C2.

And – finally – we received our first real snowfall of the year, just in time for Thanksgiving Day. Wednesday’s weather was miserable, with high winds and the worst possible mix of rain and slush, but it allegedly left us a beautiful dusting of snow overnight before promptly melting just when I woke up. Most of my friends are complaining about the outrageously cold weather, but a quick glance at status of my hometown – 5 degrees Fahrenheit with 6 inches of snow – puts the relatively tropical Boston winter at the top of this year’s list of things to be thankful for.

Happy Thanksgiving to everyone! Be thankful if you’re with your family this weekend; not all of us are so fortunate.