Do ALL the things!

I spent a while thinking about how to introduce this blog post, but you know what? No introduction is really needed. There are things that I’ve wanted to do in college/MIT/Boston that I just haven’t gotten around to doing yet, and GOSH DERN IT I’M GONNA DO ‘EM, FOOLS!

I am proud to present evidence that so far I’m 3 for 15. Hopefully I will have things to keep you guys posted about as the year progresses. 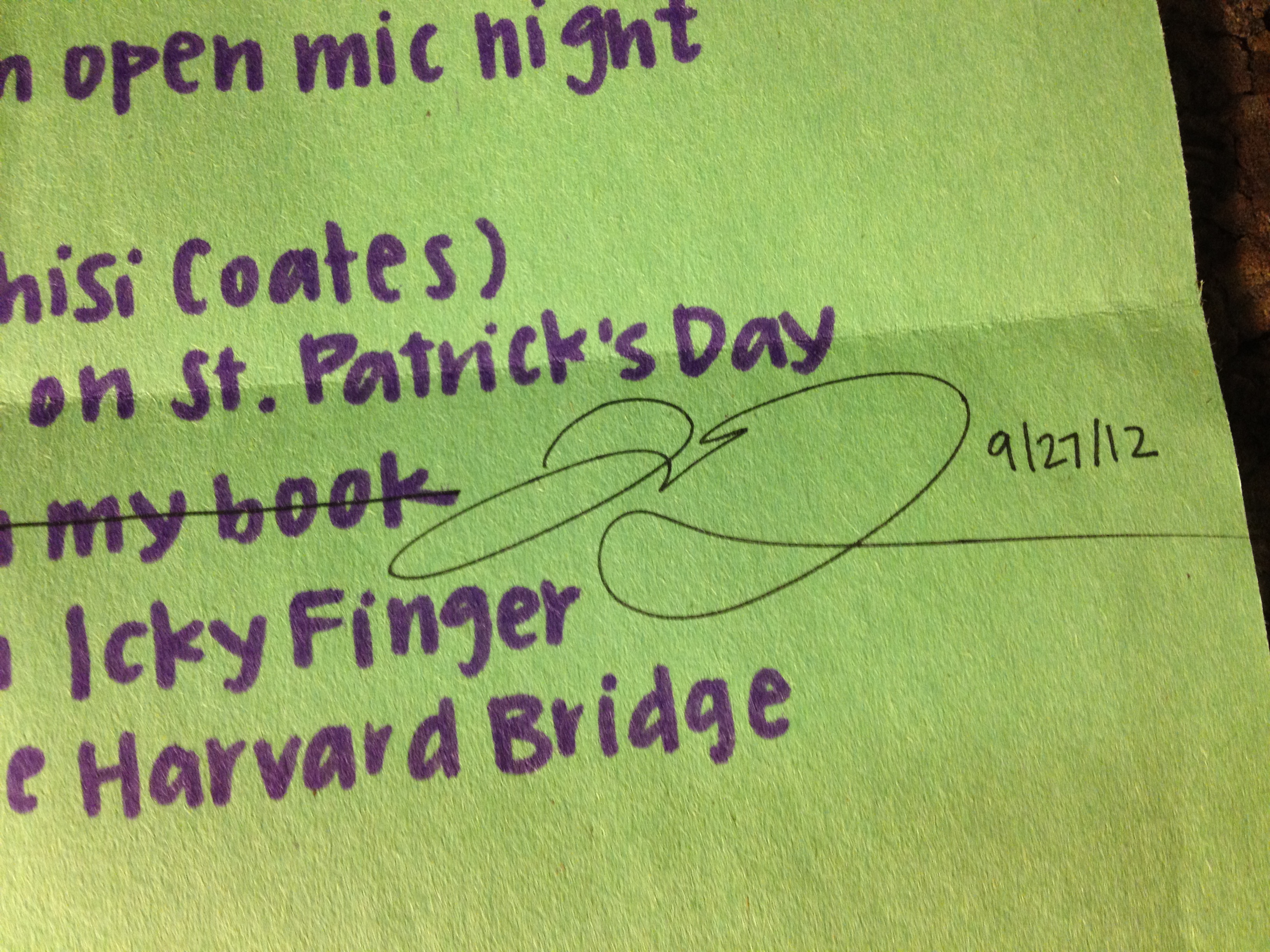 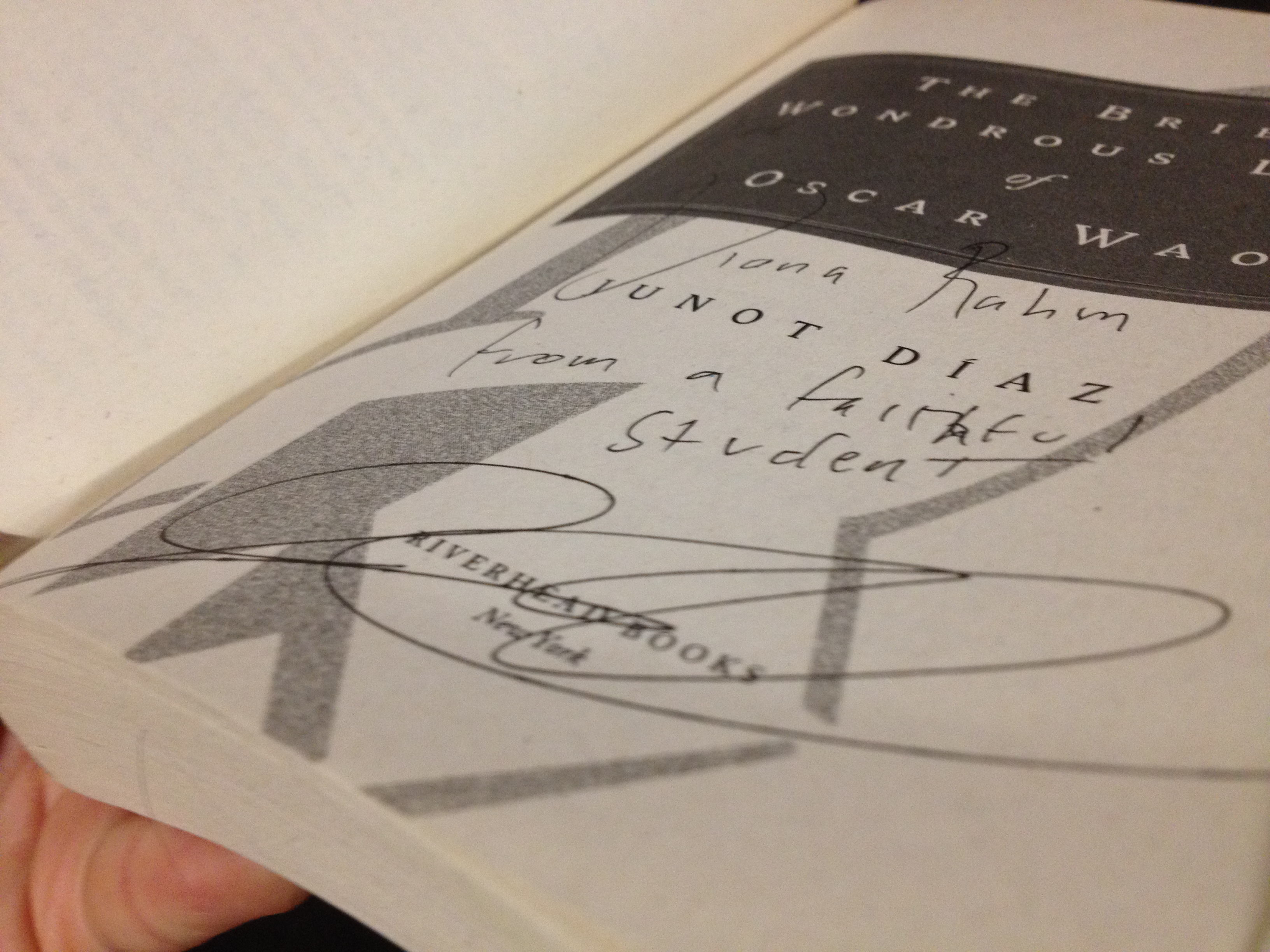 This is Professor Junot Diaz. This is a book that wrote, one of my all-time favorites. When I accepted my offer to come to MIT, one of the first thoughts that crossed my mind was Holy moly I am going to be in the vicinity of Junot Diaz and I am going to get him to sign my book and holy moly I am going to walk the same hallways he walks and holy moly Junot Diaz. Between classes and life and his travel schedule, I just never got around to stalking him visiting his office. But then the universe decided to throw me a bone. Though he’s not teaching a classes this semester, he decided to give a reading of his new book and talk about his writing process, which was during a night that I was supposed to have MITSO rehearsal. When I found out that MITSO had been cancelled (which had never happened during the previous three years I was in MITSO), you better believe I booked it over to the Stata Center like nobody’s business, where the auditorium had already overfilled with people that had come from all over the Boston area (and beyond!) to hear this incredible man speak. I got one of the last chairs in the overflow room, where the talk was being projected live. I highly encourage you to watch that video of the talk, but be forewarned that it’s pretty explicit (so Mom, don’t let Ry watch it! He already knows enough bad words!). Prof. Diaz is an incredibly eloquent and humble man, and I was in awe just listening to him speak; despite the packed audience, he managed to make the talk extremely personal, intimate, and genuine. I’m so happy that he is on the faculty of a place like MIT. Hearing someone so full of life and purpose and insight was so beautiful and I feel like a total goober but it literally almost brought tears to my eyes. He feels so much a part of this world and its people. Afterwards, he patiently signed books and took pictures with the hundreds of people that flocked to see him, addressing each individual as if he or she was a family member. I wish there were more people in the world who carried his demeanor. I thought it’d be fitting to get my book signed for my high school English teacher, since she shares a lot of the same authentic, caring qualities as Prof. Diaz. I was so lucky to have an educator like her. You can never be thankful enough for a good teacher, and in some ways you won’t realize how important of a role they play in your life until you back at the experience. Look how Prof. Diaz signed it, too! What a great man.

#13. Find people to dress up as the cast of Hey Arnold! or The Magic School Bus for Halloween. I call Phoebe.

I have always wanted to dress up as Phobe from the cast of Hey Arnold! for Halloween. Am I reaching an age dispairity with the blogs’ readers where you guys no longer understand my pop culture references? If so, please make no indication of it. Just Wiki Hey Arnold! (or even better, YouTube some episodes) and nod along and everything will be fine.

^The greatest cartoon of all time.

Well, we didn’t get around to dressing up as the cast, which is a genuis idea I’ve had since high school. I also don’t think there are many people who share my enthusiasm for the show (which is a total bummer since it was such a great show!). In fact, a lot of us were hosed with work, so we were just going to call it a night [read: I was being lame], but luckily some of my friends dragged me out of my lab reports. The following costumes were assembled on varying degrees of notice (1 day-5 minutes). 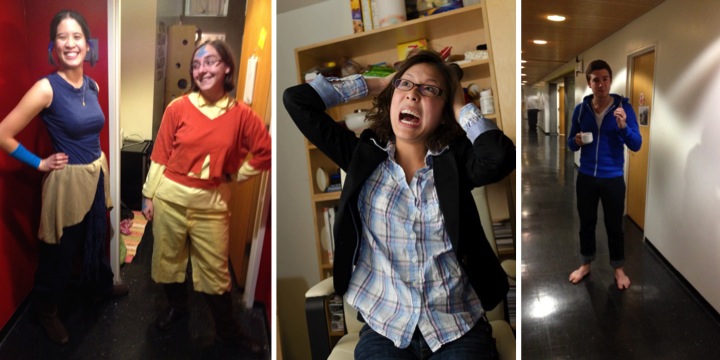 Middle: Yours truly as:

But the best cosume(s) of the evening? 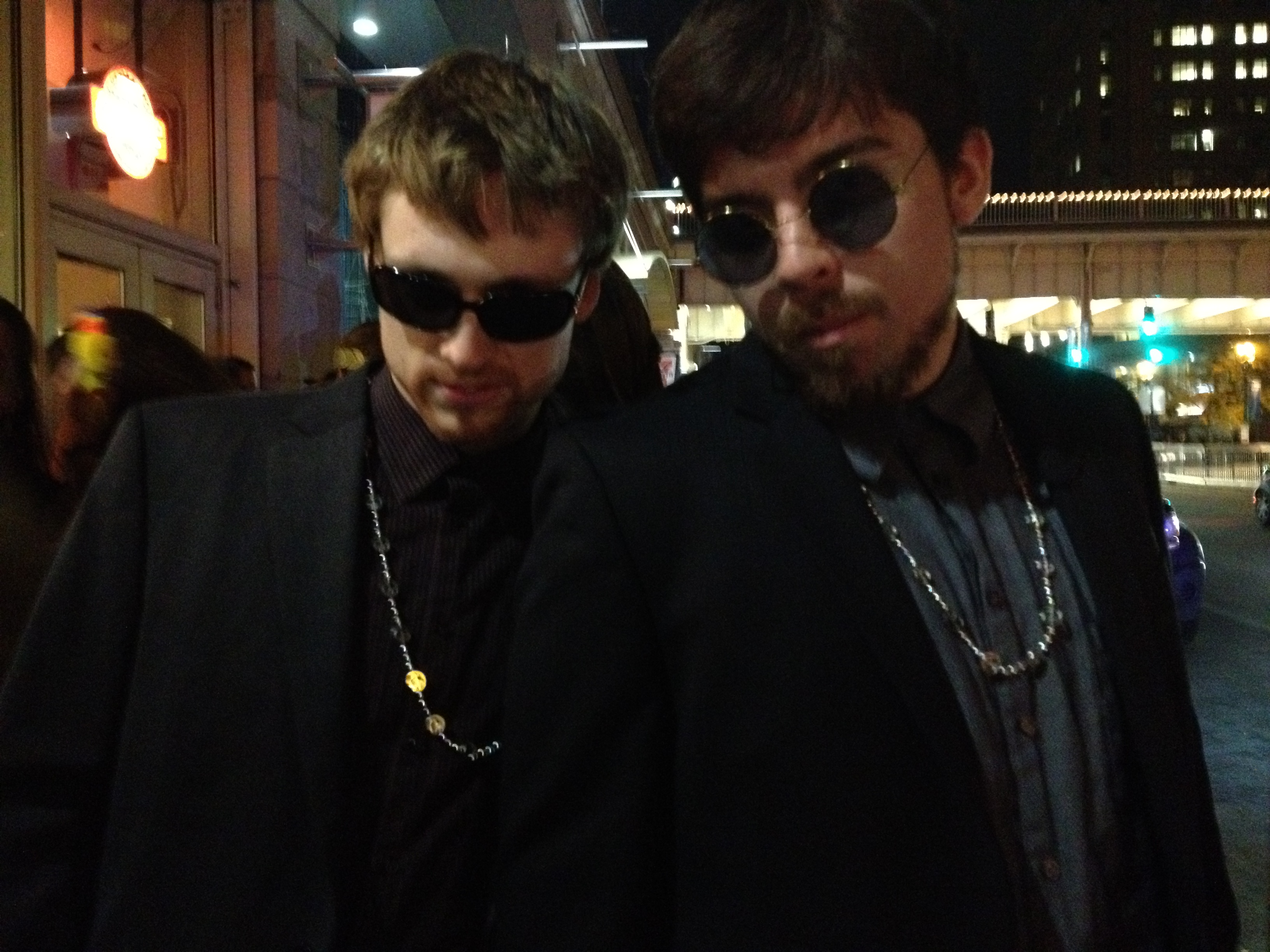 WMBR is the MIT radio station, and as I recently discovered, it is rather amazing. Keri has somewhat-extensively blogged about this hallowed place. I can’t even fully classify it as college radio, though, since so many people involved are lovely community members from around the Boston area. Maybe community radio is a more appropriate designation. In any case, it’s pretty stinkin’ cool, and I can’t believe I waited until my senior year to actually get my butt over to this place.

During my freshman year, one of my friends (who has an exceptional radio voice) had a running joke that we were going to have a show on WMBR called “Liz and Ted’s Excellent Adventure” (a reference to this, and yes, his name is Ted) and only play 80’s Madonna. That didn’t happen (do we sense a pattern here?).

The universe intervened again, as the station needed a host to fill in for a last-minute emergency, and I happened to be one of the first people that the Program Manager happened to actually run into. A couple days later, I was in the basement of Walker Memorial, carrying my playlist that I’d assembled literally minutes before and hoping I wasn’t going to screw things up. Some things I learned:

2. DJing is also pretty hard. I kept pushing the wrong buttons. There was a lot of awkward dead air between songs as I fumbled with the equipment. I also incorrectly announced the first song of the hour. In retrospect, I probably should’ve just done the show from my laptop, but I ended up learning a lot about the equipment so in the end, it was all [marginally] good. I was really repetitive on air because I hadn’t really planned anything to say, aside from the awful classical music puns I kept uttering. I also played my first LP on the air!

3. Listeners can be really nice. Some of them are kind of weird. I even got some callers during the show to give me words of encouragement! The MIT community is incredibly expansive and filled with all sorts of characters. Ultimately, I think that’s a pretty good thing. 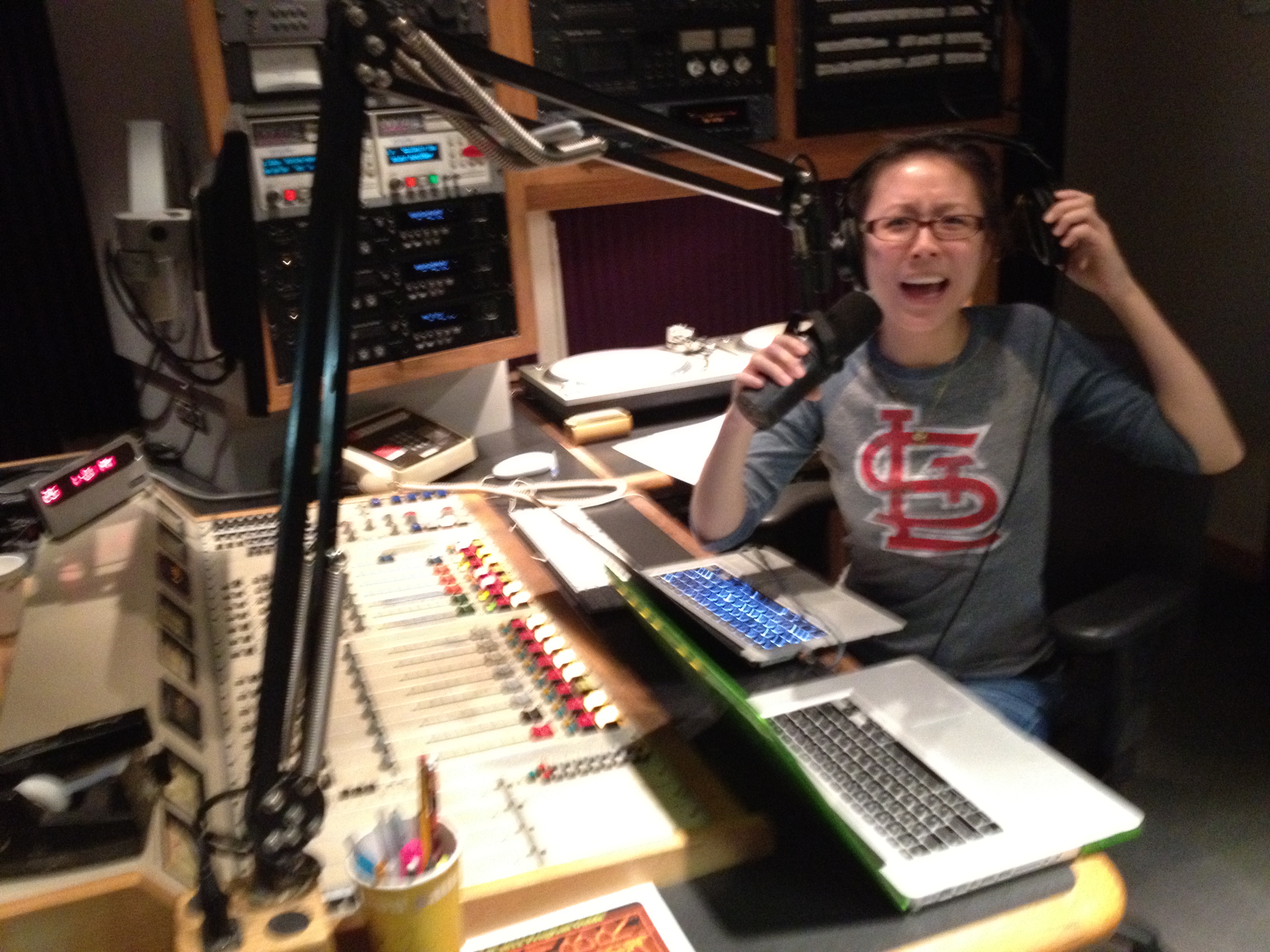 ^Me during most of the hour. I also realize that I happen to be wearing that shirt in several instances were I am on the internet. I swear, I wear things besides St. Louis Cardinals shirts.

I definitely could not have gotten through the hour without Eduardo and Allison, who patiently guided me throughout the DJing process, kept me company, and humored me in a few dance-offs. Thank you for being super! They host The Paradox Box on Saturdays from 1-2 and actually know what they’re doing. 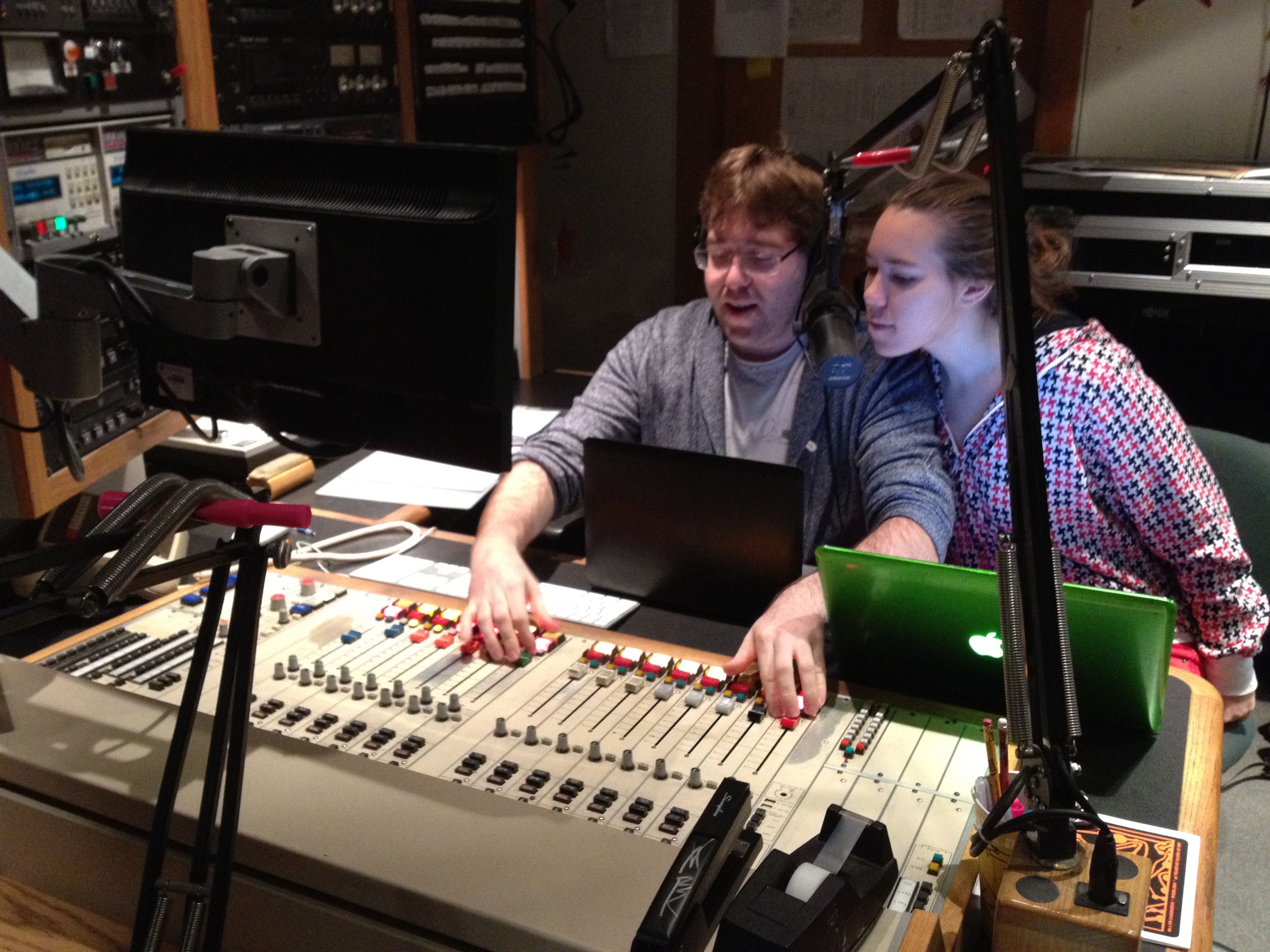 Eunice is my politically-incorrect alter-ego. I should probably not blog about her here. Also, she’s probably not FCC-friendly, so she couldn’t go on the air.

Alllllrighty! On to the remaining 12!