The Holy Grail of Classes by Snively '11

Think of the coolest class you can. Then think of one that's a million times cooler. My class is ten notches cooler than that!

Yesterday marked the beginning of classes, but today marked my first day of real classes. That’s because I got uber lucky and only have one class on Tuesday (a math recitation at 1 o’clock for an hour). I anticipated it being difficult to get back into the swing of things but was quickly surprised by my classes today.

First off, before I get too far ahead of myself, why don’t I tell you what I’m taking?

Why was I surprised by my classes? Let’s start with 18.03, Differential Equations. It’s too early to tell exactly how manageable this class will be, but the professor seems to know what he’s doing and the material so far has been over stuff I’m familiar with (vectors). Actually, if you make it past first semester of freshmen year without being comfortable with vectors then you did something wrong.

8.02 is my E&M physics class. I, um, extremely dislike physics. Oddly enough, however, 8.02 today was quite enjoyable. Again, it was all about vectors, and I can do those. Our professor seems to be amazing, he even walked around before class started and introduced himself to everybody. He’s young enough to be energetic but old enough to know what he’s doing, a rare combination. I think I’ll be able to survive 9 o’clock TEAL this semester, believe it or not.

2.001 titled “Mechanics and Materials I,” is my first class that’s part of my major. I’m not actually allowed to declare yet, but I can take this class. From what I gather, it has a lot to do with internal forces of materials (twisting, bending, torque) instead of your typical translational motion from basic mechanics. Although it’s physics (remember, I dislike physics) the professor seems very good and I am willing to practice physics. I used to avoid it like the plague, so being willing to practice it is a huge first step.

MAS.111 is my HASS (Humanities, Arts, Social Sciences) class and a continuation of the one I took last semester, MAS.110. It’s through the Media Lab (home of the OLPC) and its description states that it is

I’ve saved the best for last. Why is this post called “The Holy Grail of Classes”? Because I’ve done it, I have found the MIT Course Catalogue Holy Grail! 2.00b, otherwise known as “Toy Design.”

That’s right, MIT has a Toy Design class that requires no prerequisites, encourages freshmen, and is part of course 2. Did I mention that it also counts for CI-H? This makes it the best class in the world by itself, but I haven’t even gotten to the good stuff yet.

I got to class about 10 minutes early today (I’m a tool, I’m sorry, I was excited!) and there was a crowd gathered out front. We all excitedly discussed our new toy class, not knowing what to expect. Standing near us was a group of what looked like teaching assistants or professors, all wearing this: 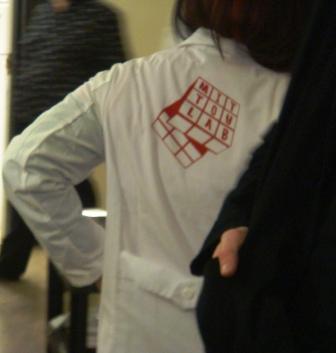 MIT TOY LAB lab coats. If these aren’t a hot ticket item then I’m not sure what could be. In the words of Veruca Salt, “I want one noooooooow!” More and more lab coats showed up as we got closer to class starting and then all of a sudden they all went into the classroom and locked us out. We weren’t allowed in until they were ready. 10 minutes later the doors opened and we started flooding in. We were met by tables covered with brown paper, a line of lab-coat clad TAs, and happy kid’s music playing the background. We all laughed and talked excitedly about everything that we saw and speculated about what might happen during lecture. Soon it was time for lecture to start so we all hushed and listened in.

The idea behind Toy Design is to work in teams of 5 or 6 to explore the design process. We begin by learning what makes a toy a toy, what makes the fun, how to play, about different types of plastic, visual appeal, and creativity. Through all of this we design, plan, and construct a toy of our own. We have access to MIT’s machine shops, injection molding machines, and tons of other facilities. By the end of the semester we will have a completed prototype, packaging, and various ways of presenting and explaining the toy. We present our toys during the Playsentations at the end of the semester. Toy companies explore our Playsentations and will often pursue marketing the toys that are designed.

Isn’t that awesome?! That’s not all though! Today we talked about the definition of a toy, a product, and a design. This is our professor demonstrating how something doesn’t need to be colorful or plastic to be a toy. 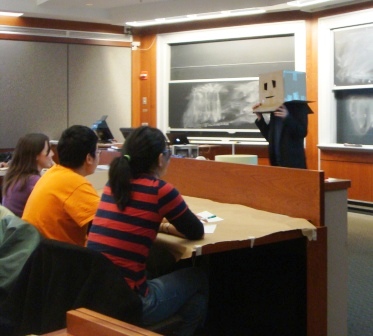 “If I were to wear this cardboard box on my head and use it as a mask, it would be a toy. If however, I used it to rob a bank [holds up NERF gun he designed] 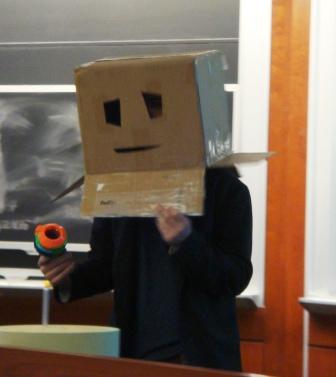 then it would no longer be a toy.”

Mmm-hmmmm, aaaaah, I see! Oh My God I Love This Class!

The next slide then popped onto the projector.

“Clear your calendar for next week everybody, we’re taking a field trip. We’re going to Rhode Island to tour the Hasbro toy factory!” 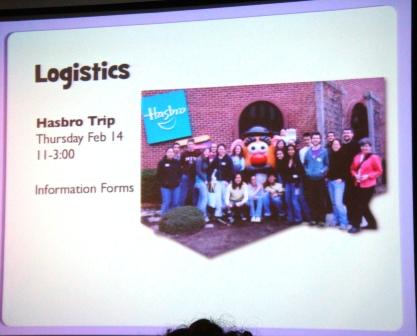 This is when I almost lost it. This is when I realized that this was the most amazing class I’d ever seen, ever! EVER!!!! EEEEVVVVVAAAAARRRRR!!!!

“But Snively!” asks the hypothetical pessimistic prefrosh blog reader, “There has to be some un-fun aspect of it! Doesn’t it have required reading or anything? Don’t you have to write essays or something?” 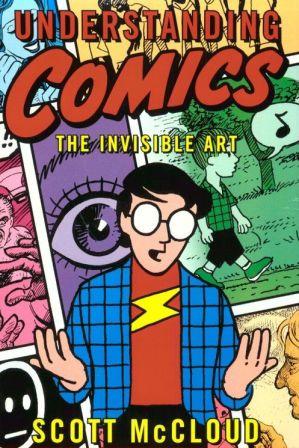 Writing essays? Not really (apart from one toy design contest that we can enter halfway through). The only real writing we’re responsible for is a sketch book full of ideas that’s due at the end of the semester.

One of the last slides he showed us dealt with life after toy class. 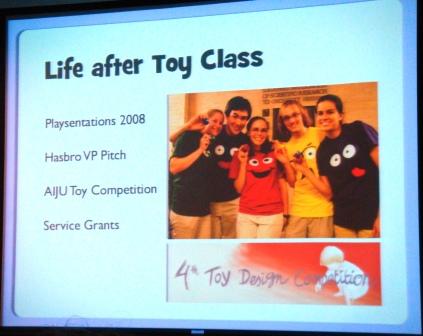 Playsentations I’ve already talked about. The meeting with the vice president of Hasbro happens if you have a toy that tickles their fancy. They usually pick 2ish every year to pursue. The AIJU toy competition is the one that needs the essay, and service grants are available if your toy shows enough promise to be marketed and you need help on the startup. That’s right, MIT helps pay to get your toy marketed.

By this point we’re all reeling. Could all of this be real? Seriously!? There had to be a catch! Turns out there was, or at least we thought there was. Our professor announced, much to our displeasure, that we would be doing an in-class assignment for the rest of class. These are never good. Remember how there was paper on all of the tables? The following slide popped up on the projector: 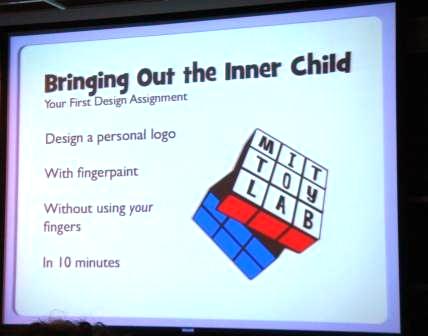 I started with the elbow technique. This was good for big shapes but tended to be too messy for the finer details. When I say messy, I mean my area ended up looking like this: 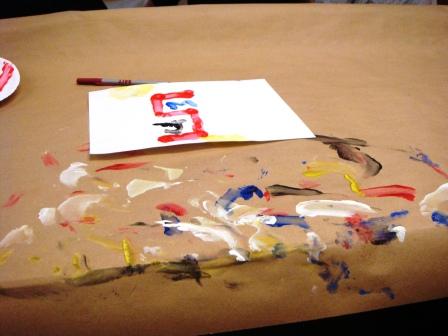 I have other appendages but I wasn’t keen on using them to paint. Maddie ’11 was sitting two spots to my right and, after a lot of persuasive reasoning (if you do it I will!) convinced me to try painting with my nose. Sure, why not? 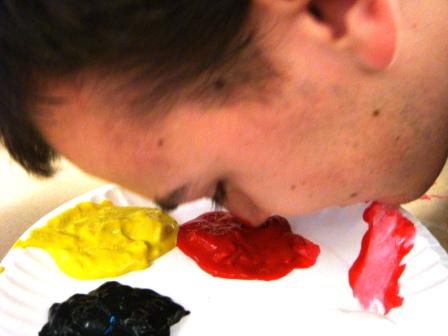 I like to get as close to my art as possible, thank you very much! 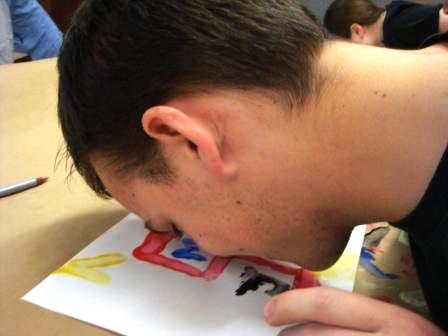 The two most artistic people at the table, Maddie and I, pose for a “I have paint on my nose” picture 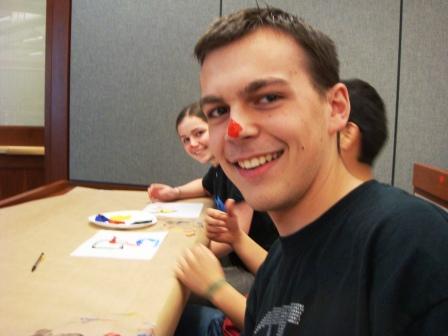 After 10 minutes we were all thoroughly painty and having a great time. We cleaned ourselves up the best we could and waited for any final comments from our professor before we left. We were handed a quick survey before we left which included many of your standard questions like —

But then went on to ask

>Are you familiar with current children’s television/movies?

>Are you familiar with current video games and/or toys?

We all filled out our surveys and left in high spirits, knowing that we had all signed up for the best class ever. *sigh*

47 responses to “The Holy Grail of Classes”